1861 "Phantom Horseman of the Prairie" Invited to Warrensburg by Gen. Cockrell

"THE PHANTOM HORSEMAN OF THE PRAIRIE."
Invited to Warrensburg by Confederate Gen. Cockrell

"One of Jennison's leaders who fought in the last two Missouri actions was Charles Metz, alias Marshall Cleveland, an ex-Missouri penitentiary convict, later a commander of a company of Jennison's Seventh Kansas Volunteer Cavalry (soon to be dubbed "Jennison's Jayhawkers" or the "Southern Kansas Jay-Hawkers, as they preferred to call themselves). Cleveland distinguished himself in the Morristown operation by killing Reverend Martin White, the killer of Frederick Brown (John Brown's son, who was killed during Atchison's 1856 invasion of Kansas).
Link killing of Rev. White
Apparently, White's killing was not motivated by revenge; Cleveland merely sought White's mule and White refused it. Later in the summer, Cleveland and John Steward returned to Missouri to continue freelance plundering. As a result of these raids, by early July, James Montgomery reported contrabands (slaves) streaming into Kansas by "brigades." . . . . Company H, composed of many of Jennison's original Jayhawkers, became the most notorious unit in a notorious brigade. Ex-convict Marshall Cleveland, the captain of H Company, the "black horse company," has already been mentioned for his exploits in Missouri in early 1861. Many of Cleveland's colleagues saw him as an authentic swashbuckler. But his discipline was poor, and his tenure short in the brigade. In fact, he failed to survive its first formation. When Daniel Read Anthony called for a "dismounted parade" of the regiment, acting in Colonel Charles Jennison's behalf, Cleveland turned out for the formation in a somewhat motley garb--a soft hat, a regulation coat, drab trousers thrust into low-topped riding boots, a belt carrying a surplus of revolvers and a saber that seemed a hindrance. When Anthony censured Cleveland publicly for his incorrect uniform, Cleveland indulged in a loud shouting and cursing match with Anthony, then mounted his horse and rode off to pursue his own freelance, no-holds-barred Jayhawking operations. Cleveland was tall, erect, and a dead shot. One of his colleagues in Jennison's regiment, Simeon M. Fox, said that had Cleveland dressed the part, he would have been the ideal of an Italian bandit. Fox described Cleveland as being thin of visage, his complexion olive-tinted and colorless, with black, piercing eyes, finely cut features, dark hair and beard, correctly trimmed, completing a tout ensemble. Cleveland soon attracted a number of men to his gang from Jennison's old organization, all of whom, according to Fox, were degraded ruffians, dissolute and dirty desperadoes. One thing particularly remarkable about their appearance, he said, was that some of them had dyed their mustaches a villainous metallic black, marking them as irreclaimable scoundrels. Cleveland soon made his headquarters in Atchison, Kansas, where he dubbed himself the Marshal of Kansas. He virtually controlled the town, using it as his base of operations for Jayhawking runs into northwest Missouri's rich farming communities and for robbing wagon trains, banks.

Link
Link
This band became the terror of the border Counties of Missouri, and was not always governed by the finest discriminations between the loyal and disloyal; and, as a matter of self-preservation, few men who fell into their hands were ever known to tell any tales. In October, 1861, Mats (Marshall Cleveland "Max") was arrested by the military authorities at Kansas City, and was confined in the guard-house. My regiment was then on duty there, and a detail was made from my company for guard duty. The boys told me that "Cleveland" was in the guard house. I then told them the story of my brother's trip to Butler, and how "Cleveland" had saved his life, had his horse, etc., returned to him, offered him money, or any assistance he could render him in his return home, and wound up by saying to the boys, " You must do your duty as soldiers, and if 'Cleveland' should make a break for liberty, and yon have to shoot at him, shoot high; don't shoot the poor follow in the legs." Just as I expected, "Cleveland" got away that night. Whether my actions had anything to do with his escape I know not nor care not. I owed him a debt of gratitude. To resume my story. After resting a few days, not being able to get to my command, I determined to go to Warrensburg (Missouri), where Col. Grover had a company or two of men who were holding the county. Dr. J. H. Warren and I made our way with much difficulty to Warrensburg, where I remained until after the Wilson Creek fight, when the rebels returned to this part of the State in great force. Col. Grover with his command struck out for Jefferson City, and I determined to try to make my way to Kansas, and if possible

REJOIN MY COMMAND.
Gen. Cockrell had returned to Warrensburg with a large rebel force and sent a very polite note to myself and other Union men in the country, inviting us to come to town, as they did not wish to harm anyone, but to make friends. This kind invitation we declined. We spent that day and night in the woods, sleeping that night in a dense thicket of underbrush near the road, where we could watch the movements of the rebel forces. In the morning we went to the house and got our breakfast, and Capt. W. L. Houts and I went out into the rear of the cornfield to await further developments. In the meantime Gen. Cockrell decided to send a more urgent invitation to us to come to town. We had been away from the house but a short time when it was surrounded by a company of armed rebels. Some of the younger boys of the neighborhood were in the house, and seeing the men approaching from the front, sprang out at the back door only to find bayonets there to receive them. They were surprised and the rebels were disappointed; for they did not find the ones there that they wore particularly anxious to see. The boys were held a short time while the rebels searched the house for arms and ammunition. Not finding any, and the boys having done nothing that rendered them especially obnoxious, they were left to their own reflections. As soon as the rebels were gone Capt. W. L. Houts and myself were notified of what had just happened, and we determined to make a break for Kansas the next day. We lay in the brush that day and night, and next morning about sunrise, having eaten our breakfast and taking a noon lunch with us, mounted our horses and started for Kansas. In order to get through it was necessary to keep off the public roads.

WE PASSED NEAR ROSE HILL
followed the creek between Pleasant Hill and Harrisonville until we struck the dividing ridge between the Blue and Grand Rivers, then taking as straight a course as possible for Aubry, in Kansas…..

"No other regiment in the Union army had so evil a reputation, or had done so much to deserve it, as the Seventh Kansas Volunteer Cavalry. "Jennison's Jayhawkers" is the story of this unique Civil War unit and the colorful personalities who shaped it: Colonel Charles Rainsford Jennison, John Brown Jr., Susan B. Anthony"s brother Daniel, Marshall Cleveland (the "Phantom Horseman of the Prairie"), "Buffalo Bill" Cody, and others."

On November 16, 1861, Cleveland's gang robbed the Northrup and Union Banks in Kansas City. Finally, he became such a pest to the army in Missouri and Kansas that Company E, Sixth Kansas Cavalry, surrounded him near the Marais des Cygnes River and shot him dead. His so-called brevet wife later placed a tombstone atop his grave in a St. Joseph cemetery with the epitaph:

"One hero less on earth


One angel more in heaven."

If any of this information is incorrect, please let me know.
The Younger's situation was further exacerbated after the war because of warrants for Cole Younger's arrest for a war-time killing, which made it difficult or impossible for him to return to a peaceful life. So it's best to judge these men based on their unique circumstances rather than judging them ordinary criminals. Both the James and Younger families before the war had impeccable reputations, and both families were prominent in the Border War counties of Missouri.
Don Gilmore    P.S. I'm the author of two articles about the James gang, "Showdown at Northfield" and "When the James Gang Ruled the Rails," plus, I am the author of Civil War on the Missouri-Kansas Border and two articles on the Border War, "Revenge in Kansas, 1863" and "Total War on the Missouri Border," a prize-winning article in Journal of the West, at Kansas Statte University. So I know a little about the subject, but a lot can be learned from the sources mentioned earlier. Settle's book is particularly well researched. 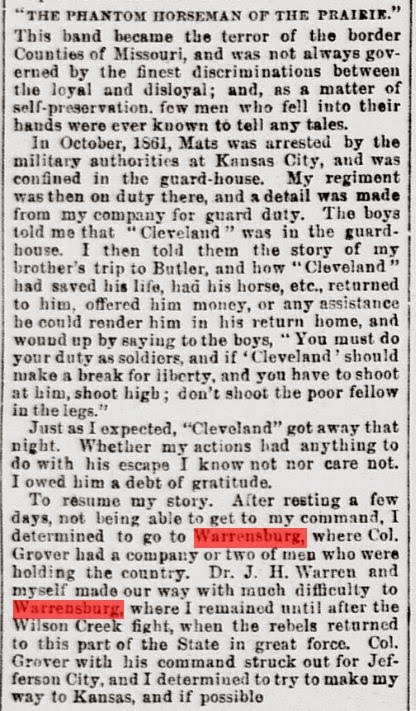 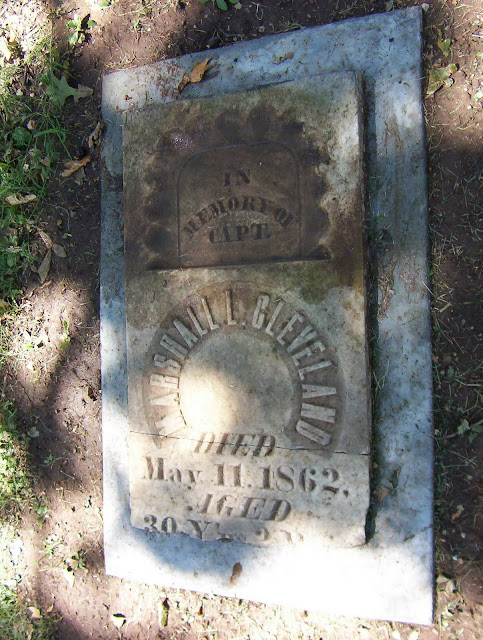 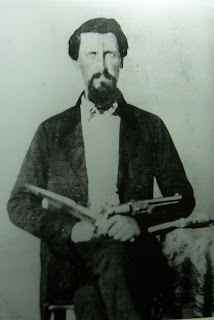 Marshall Cleveland
An interesting little piece from The Daily Times in Leavenworth, dated 5 August 1862:
Cleveland's "widow" had the body of the great jayhawker exhumed, last week for the purpose of getting a lock of his hair. That tombstone at last is planted at the head of his grave.
http://jayhawkersandredlegs.blogspot.com/2009/08/hell-is-full-of-such-angels-part-iii.html

Excuse me, I am a direct descendant of Rev. Martin White and am researching his life, continuing my grandmother's 28 years of research into her White family (published in 1983). I would like to know where you obtained the information about the killing of my ancestor? I have a short biography on his life on my History Nut of Missouri blog and I have never heard this story until a relative directed me to your website. Martin died on April 21, 1862 and is buried in the White cemetery in Bates County, MO. I noticed you had a link to Findagrave here. He is among those listed on that website. I'm compiling a timeline of his life and have discovered much new information that my Grandmother never found. I hope to hear from you soon.

Civil War on the Missouri-Kansas Border
By Donald L. Gilmore

Donald Gilmore's book is on my stack of books to read. Many bad-dude characters claim-to-fame is the killing of my ancestor and then he shows up somewhere alive! Oops! Do you know how to contact Mr. Gilmore?