In all likelihood hamburgers were first served in Missouri at the St. Louis World’s Fair in 1904. It was a taste the country would soon learn to love. By the 1920s, the first hamburger shops began to appear. In Warrensburg, where there were students with big appetites, a tight budget and time to hang out with friends and classmates, hamburgers soon became quite the fad. Anyone from the war generation who was ever in Warrensburg remembers the town by names like Hart’s, Tracy’s and Fleming’s. The first hamburger shops had local owners whose families pitched in and fried burgers and prepared other mainstays, such as pies, French fries and chili. And, of course, the customers found ice cream, soda pop, hot dogs and other sandwiches as well. When it comes to hamburgers, Warrensburg is still a hub, but now we have national names like Burger King, McDonald’s, Hardee’s and Wendy’s as well as places such as Heroes and Players.

Harts Hamburgers and Chili
In 1930, Ted and Elsie Hartshorn came to Warrensburg and opened Hart’s Hamburger Shop. Their niece, Lady Elsie Rinker, recalls that her parents ran a hamburger shop in Cameron, Mo. At that time, Ted (Theo) Hartshorn was a shoe salesman; he and Elsie had married in New Orleans and moved around the country. So he got the idea of opening a hamburger shop. He bought the shop owned by Doug Fryrear and Sam Burge at 129 East Pine. See Sam Burge murder.
It was on the same lot as the former gas service building on Culton Street. It was a small building; it just had stools, no tables. They named it Hart’s, for themselves, though sometimes it also appeared in advertising as “Harts” and the image of a double heart. The Hartshorns worked in the shop together and their niece waited tables in the summers, but business was brisk and they also had helpers. One of the first young men to work for them was W.W. “Speck” Wilkens who was in school. On May 19, 1933 The Daily Star-Journal reported that the Hartshorns were building a new shop just west of the old post office. The building would be “of Spanish castle style and of rock” with a tower at each corner. The shop was small at 20 by 30 feet, but there was room for four wooden booths that could seat 28 and a counter with stools. Even the hardware for the front door was heart-shaped. Soon teenagers and college pairs began to carve their initials and heart-shaped messages into the booths. You can still see some of these in the booth donated to the Johnson County Historical Society. Nancy Basham recalls, “It was the meeting place for kids when I was in high school but I wasn’t allowed to go in the evening.” It was a stopping place for teenagers and sometimes a place to play hooky from homework, piano lessons and chores. Joann Cooper Hanna recalls, “When I was in first grade, my mother gave me money to take piano lessons. The teacher was Jessie Simpson who lived on College Street. I didn’t like the lessons, so I stopped going. I went to Hart’s instead. For the money Mother gave me for the lessons, I could buy eight burgers and two cokes. I would sit on the wall outside of Hart’s and eat them. Eventually my mother found out what I was doing. So that ended my hamburgers at Hart’s.” The menu at Hart’s included, in addition to hamburgers, chili, hot tamales, sandwiches, and ice cream. Ahead of their times, the Hartshorns also advertised curb service and free delivery by calling 145W. Nancy Basham remembers how the chili was served explaining, “Their chili was special and very good. The red beans and chili meat were cooked separately and put in the bowl together when served – and no liquid. We never had it that way before or since but it was good.

”Hamburger Shops in the 1920’s Jane Fryrear Reynolds recalls her dad, Doug Fryrear, owned a little hamburger shop on East Gay Street. “It was located in the area of the Christian Church’s education building. It was a small frame building, with about 12 stools, no tables. The counter ran from one side of the building to the other and the cook entered by the back door. ”Reynolds’ father sold chili for 10 cents; hot dogs and hamburgers were five cents each.

“Mama made the pies and they sold for 10 cents per slice. He also had chocolate and vanilla ice cream, plus several kinds of frozen bars,” she said. “Daddy worked the early morning and afternoon shift; his student help came in after school, allowing Daddy to be home for the evening meal with us and catch up the day’s activities before going back to the shop for the after-the-movies trade. “Saturday night was family night. We got to eat at the hamburger shop; we were not allowed there any other time. And we went to the Star Theater for the first show. There were no talkies then; Mama read the plot to us. Can you imagine mothers all over the theater reading to the youngest?” Reynolds said. “After the show, Daddy took us home and he went back to the shop to help with the late night trade.”
Riggles
Forrest Riggle 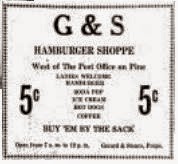 Material for this article courtesy of the Johnson County Historical Society and The Bulletin, CMSU professor Susan Pentlin, editor, and the CMSU Archives and Museum, Vivian Richardson, assistant director 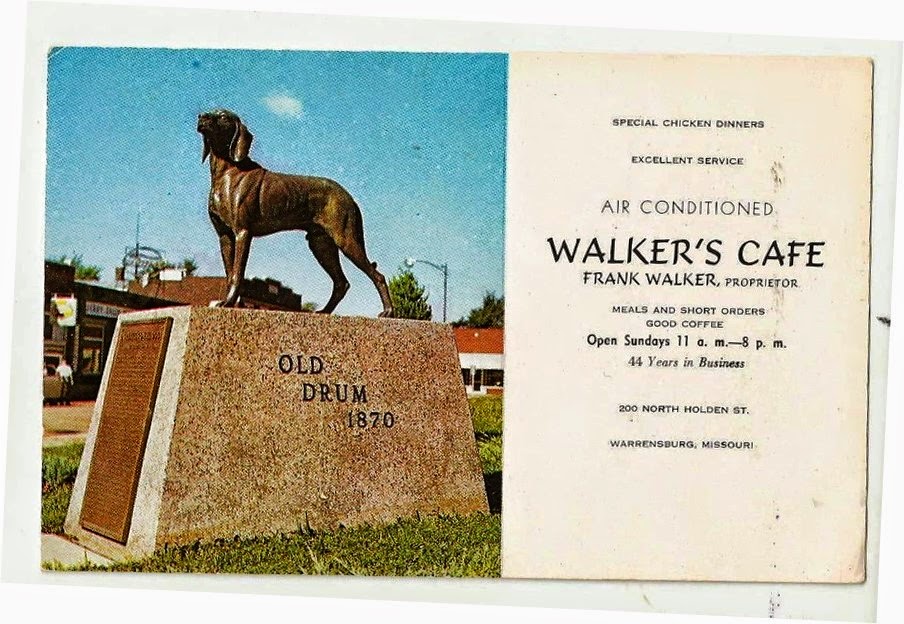 
Other people who read this story rated it:

When the Chick-fil-A® cow arrived on campus this fall, followed by the two Einstein Brothers®, it was official; the University of Central Missouri had entered a new era of food choices.


Then, Kirkpatrick Library entered UCM food history by opening an Einstein Bagels, becoming part of the largest bagel retail company in the U.S.


Some of the most prominent food franchises in the nation, these campus eateries continue a tradition that began generations ago.

Perhaps the most famous, and most often remembered, restaurant was Riggle's, located directly across from the campus on Maguire Street in the area once known as Buentetown. Later known as the Campus Inn, it served students for more than 30 years while others came and went along the same block of businesses. Although Buentetown, known to a later generation of students as the College Plaza, is gone, one building still stands. The old Buente grocery store, which for many years also was Ike Martin's music store, now houses Planet Sub.
One of the first franchised restaurants to arrive in Warrensburg was the Dog 'n Suds Drive In east of Maguire Street on Business Highway 50. A Pizza Hut® later was built at the same location, it now is the site of Walgreens. Sonic® appeared in Warrensburg in the 1960s, only to disappear for a decade or so during the 1980s. It reappeared in the same location, where it remains today, serving another generation of UCM students.
Before long, the Warrensburg business community grew to accommodate more of these restaurants. Commonly known as "drive-ins" because of the convenience of ordering from the car, they eventually became known as "fast food" restaurants because of the speed of service. Many of these franchise operations, such as Ku Ku and Mister S, are part of the local lore. Others, like McDonald's®, Burger King® and Wendy's® still compete with local establishments.
Pizza always has been popular, beginning with the Village Inn Pizza Parlor on South Maguire. Its location across from what once was the Campus Movie Theaters made it a popular place. Its location close to campus also made it popular for a variety of restaurants over the years.

Comments About This Article

I would love to have one of the Russian salads they used to serve at Walker's!

What about that pizza place on the south side of town? I remember having my first taco pizza there in 1982.

Webb's cafe was on the corner of Business 50 & Washington. There was an A & W Root Beer before Dog N' Suds located approximately where Burger King is. And for the best Bar-B-Que every served in Warrensburg it was Breeze Inn.

Great article but I believe you meant Walker's Cafe, not Wilson's Cafe. I don't remember Wilson's but Walker's was downtown on the corner a block from the Courthouse. I also remember Milburn's. Thanks for the memories.

What about Taco Tico?

Nobody writes about Barney's. That was the favorite dancing place in the early '70s. Shree Loya

I proposed to my wife at Riggles and worked at Peterson's Drive-in and Ball's Cafe. I also spent a lot of time in Ma Browns.

Lamb's Cafe was my favorite. Open most hours of the night and later when it moved on the north side of Bus. 50 24 hour service, it was the favorite place to get coffee. Theirs was the first in Warrensburg to install a filter on the water and remove the "bad" taste from the local water, making the coffee the best in town.

How about the "TOP HAT" on Highway 50 east; Anderson's at the old hotel on South Holden, just up the hill on south side of the railroad station; Mother Brown's Tipsy Tea Room and last but not least Lambs at the junction of Highway 13 and 50.

This was a wonderful trip down memory lane, thinking about Hart's Cafe with its wooden booths, and, if I recall correctly, the Mule head at the door (not a real one of course). There was in the 1970s a great tea joint downtown, where I had my first plate of spaghetti. But let's talk about the BARS: The Granary, the Library. Dr. John singing "Right Place, Wrong Time" while a patron streaked the place. Some great Thursday evenings spent downtown.

Joe's, home of the Warrensburger, is missing!

How about the Warrensburger, Tim's Pizza, and the Tee Haus?

How about the "Q and S (Quality & Service) Bar," fondly known as "Ma Brown's." Laura Brown had cheese and crackers for a dime and Stag beer for 15 cents.

My favorite was a coffee house downtown that served flaming sundaes and great deli sandwiches with carrot cake. This was during the late 70s and early 80s.

I agree with the remarks about Walkers. Walkers fed me for several years while attending "Central Missouri State University" as it was known back then.

In the late 1950s, the Tip-Top Cafe served those fabulous half-moon shaped fried pies topped with ice cream. It still makes my mouth water to think about it after 50 years.

And, the West Pine Cafe, The Plaza Creme, the fountain at Buente Bros. Drug at Pine & Holden, and Coleman's store in the basement of the house at College & South.

I don't see The Bungalow listed. I'm not sure which one, but someone had fried pies for a nickel.

I would also add Walker's Cafe downtown, and Milburn's Drive-in at Young & Maguire. All and all, you did a terrific job

It filled in a lot of years

Love the picture of the group of young couples taken at Riggles in the late 40's- assumed it was a stock photo with models until I noticed the caption!

Does anyone remember the name of the small steakhouse on Business 50 East where a band called 'Nostalgia' played in the early-mid 1980's?