How the UCM Mules Got Their Name - Warrensburg, MIssouri 1919 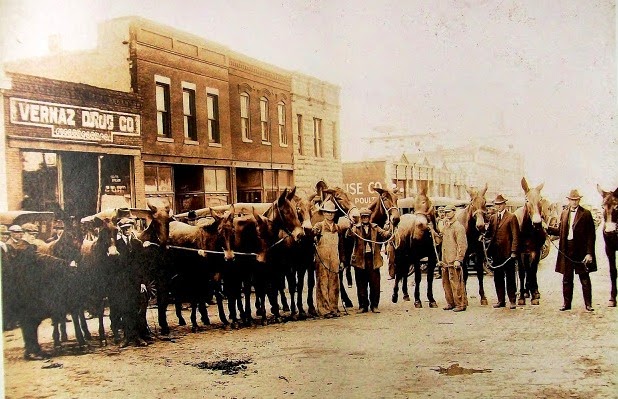 How Warrensburg "UCM" Came to Tag Its Athletic Teams Mules / Jennies
by Bert Masterson (1937 Story)
How the Central Missouri State Teachers of Warrensburg came to be tagged the "Mules" was recounted by Dr. W. W. Parker Thursday afternoon as he talked over the basketball game set for Monday night, with Tad Reid's lads calling in Cape Girardeau. 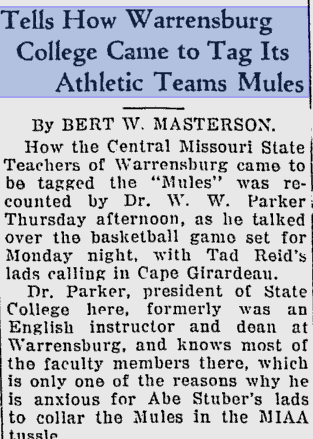 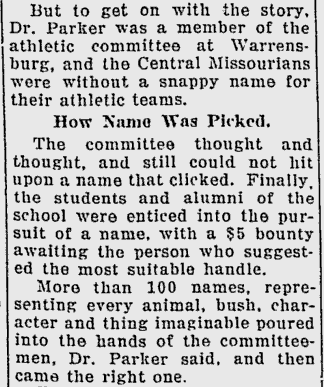 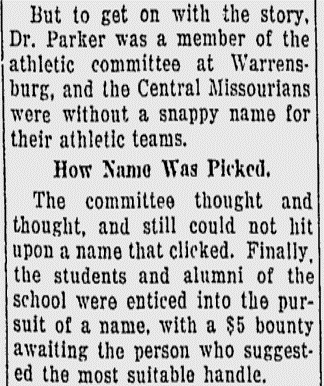 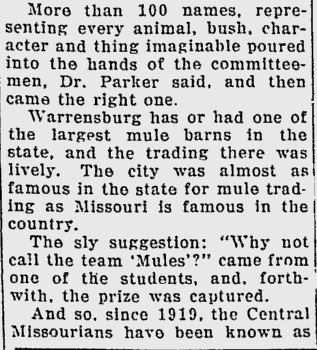 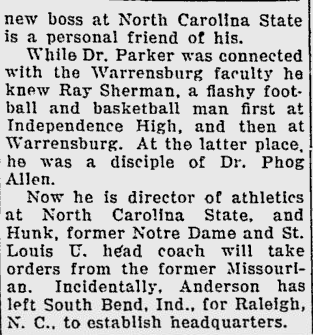 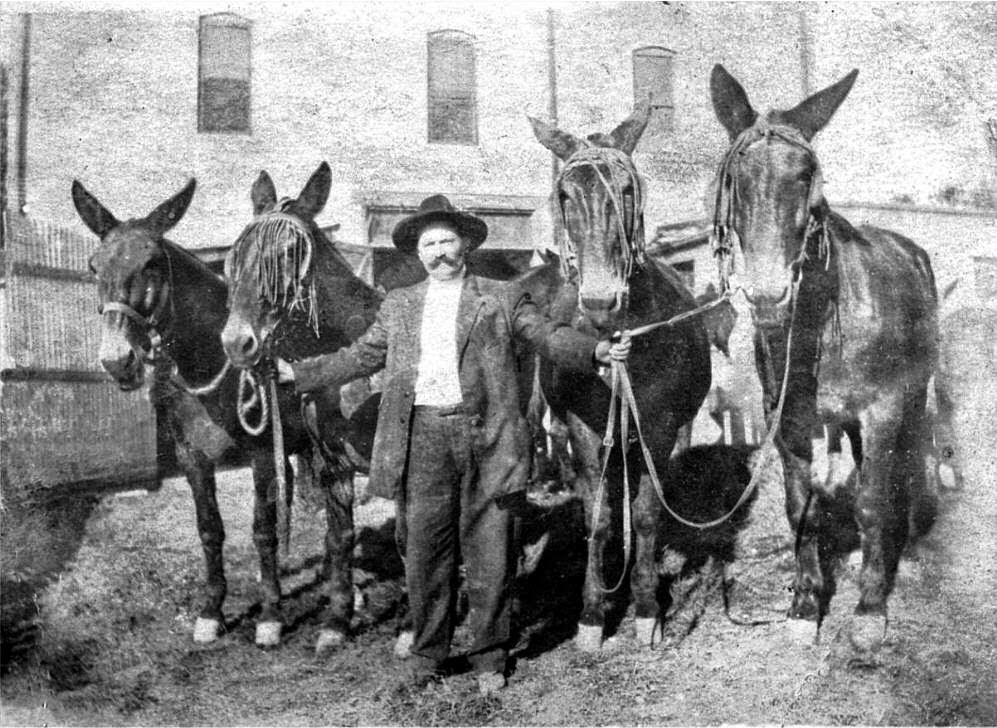 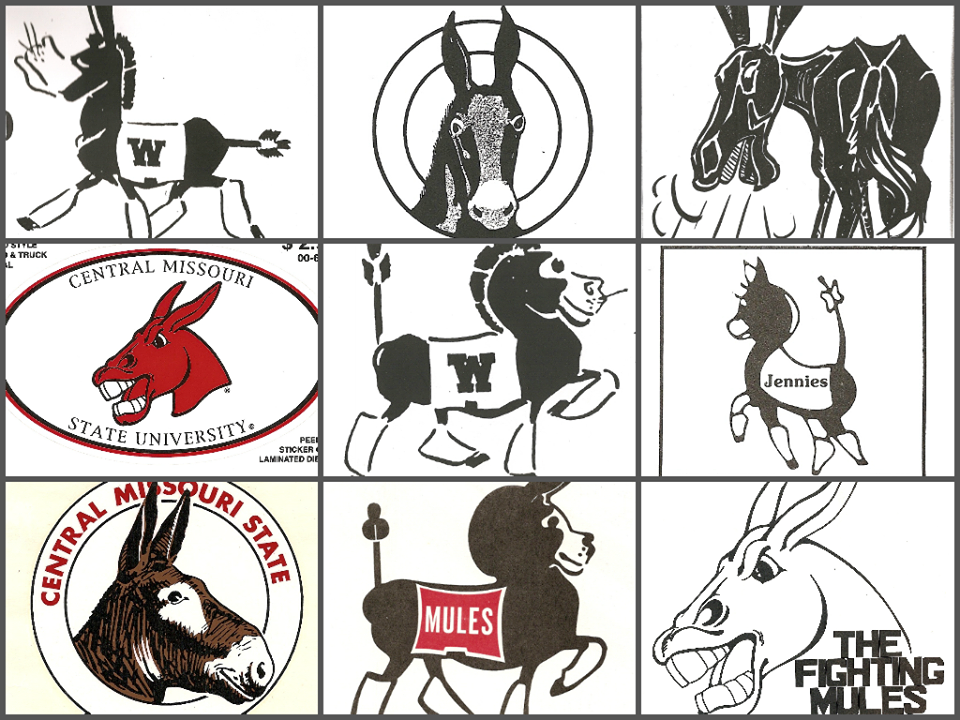 PHOTO BY MARIE NABORS / PHOTO EDITOR
The university recently added a life-sized statue of a mule to the east end of a parking lot at the corner of King and South Washington Streets, across from the Audrey J. Walton Stadium.
(WARRENSBURG, Mo., digitalBURG) — A life-size statue of a mule was recently completed as part of a parking lot improvement project at UCM, with the intent of paying homage to the strong history of the Missouri Mule in the region and at the university.
The statue stands at the east end of a parking lot at King and South Washington streets, directly across from the Audrey J. Walton Stadium. It is near the Mule Train tailgate area, so people can see the statue when they attend sporting events. Athletic Director Jerry Hughes and President Chuck Ambrose decided they wanted a mule statue for the tailgate area when the parking lot development first began.
Hughes was tasked with finding an affordable company to make the statue. He chose to purchase the statue from the Robert F. Herndon Corporation of El Paso, Texas, and spent $3,900, including shipping. The money for the statue came out of the Athletics licensing account.
Jeff Murphy, assistant director of University Relations, said the bronze-colored mule stands 90 inches long by 21 inches wide, by 78 inches high, and weighs approximately 700 pounds.
Missouri is known for the quality of its mules more than any other animal.  Mules came to America in 1785 from Spain, according to Terri Ballard of the Sedalia Area Chamber of Commerce Agriculture Committee. Ballard said a mule is fathered by a donkey and mothered by a horse. He said mules were the working livestock of choice because of their strength, stamina and intelligence. Ballard said the term Missouri Mules was coined at the 1904 St. Louis World’s Fair when the mules were showcased, and people were impressed with them. Missouri led the nation for many years in the number of mules bred and sold, Ballard said. UCM adopted the mule as its mascot long before Missouri chose it as the official state animal in 1995.
UCM’s mascot, Mo the Mule, is 94 years old. The mule was chosen as the mascot in 1922. In 1919, the school’s name was changed from the State Normal School for the Second Normal District to Central Missouri State Teachers College. The school’s sports teams didn’t want to be called the Normals anymore, and being called the Teachers didn’t seem right either. So, the Athletic Committee put on a “name the team” contest. There were over 80 entries which included skunk, bobcat, and hippopotamus. The mule won and the new mascot was announced at convocation Feb. 15, 1922, according to the McClure Archives.

PHOTO SUBMITTED BY UCM PHOTO SERVICES
Mancow the mule, the University of Central Missouri’s current living mascot, is ridden on the field at every Mules football home game.
Since that time, UCM has had many living mule mascots. The first recorded live mule mascot was Gismo, who may have been the first living animal mascot at UCM. He became the mascot after World War II. Little Mo was the next living mascot. He was a miniature mule from a farm near Richards, Missouri. The 1951 Alumni News Bulletin said Little Mo was described by State Fair livestock experts as one of the finest small mules they had ever seen. Little Mo made his first appearance in November of 1950 at a Warrensburg vs. Springfield football game. The next living mascot was Roscoe, who became the mascot in the early 1960s. He was cared for by members of the Sigma Pi fraternity for a while before being moved to the university farm. The next mascot was Abbedale. She was donated to the university in the early 1980s, and retired in October 2003.
Our current living mascot is named Mancow. Radio personality Erich “Mancow” Muller gifted the university with Mancow the Mule in 2003 at the Missouri State Fair. Mancow attends home football games and a few other UCM events. She is housed at the Prussing Research farm near Warrensburg, and agriculture students care for her. Mancow was purchased from Paradise Mules in Belle, Missouri.
While men’s athletics teams have been known as the Mules since the 1920s, calling the women’s teams the Jennies is much newer. The Muleskinner offered a $50 prize in 1974 for anyone who could think of a nickname for the women’s teams. Cynthia Almaguer, class of 1974, won the contest out of 34 entries and said she chose the name because the mule is a descendent of a female donkey, which is called a Jennie.
Sometimes people don’t understand why a mule is UCM’s mascot, and it’s probably because they aren’t aware of the importance of mules in Missouri’s history.
One alumni in particular says he thinks the mule is the perfect mascot for UCM. Richard B. Tudman, class of 1969, wrote a letter to UCM in April. He said it was only after retirement that he got the chance to understand the true meaning of UCM’s mascot. Tudman studied the Santa Fe Trail, and was able to travel some of it.
“It has taken years for me to truly understand the meaning of our Missouri Mule Mascot…now I get it,” Tudman said. “Missouri mule accomplishments and contributions are written in the history of the westward expansion of this country. Never has there been a more powerful, prouder or more meaningful mascot at any university in America.”
UCM students can celebrate the mule with Spotlight at National Mule Day from 11 a.m. to 2 p.m. Wednesday, Oct. 26 in front of the Elliott Student Union