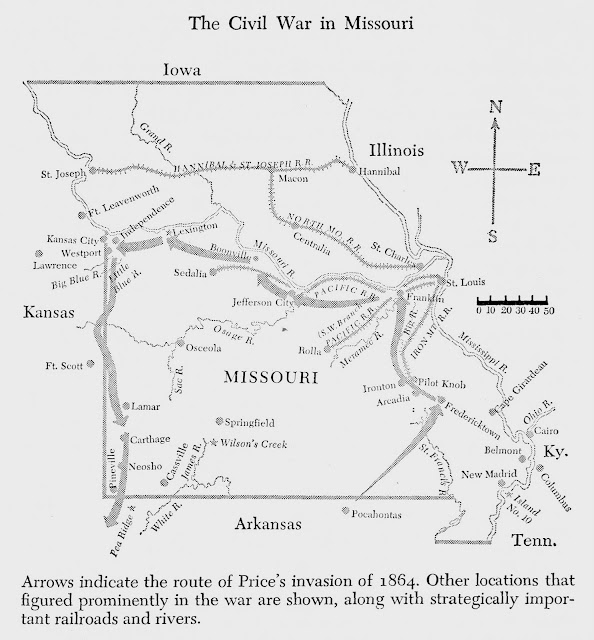 
SIR: In obedience to orders I would submit the following report:
You will observe by my report of June 9, 1864, that Sergeant George, Company M, who was at that time on a scout to Kingsville and south and southwest of Kingsville, has returned to camp, having marched about 30 miles; made no discoveries. June 10, 1864, Sergeant Millirons and 20 men of Company D, on scout and foraging expedition to Kingsville and west of that place, returned to camp on same day, having marched about 20 miles. Sergeant Key and 10 men of Company D at Kingsville, remained all night and returned to camp on the morning of June 11, 1864. Sergeant Triplett and Corporal Parman's scout will be given in detail.
On the morning of June 11, 1864, in obedience to orders, I ordered Captain Eads, Company M, to detail from his command 1 non-commissioned officer and 14 privates of his company for a scout north of Kingsville. who marched at 9 a.m. of said day under the following order:
HDQRS. DETACHMENT FIRST CAVALRY, MISSOURI STATE MILITIA,
Holden, Mo., June 11, 1864.
Corporal Parman and 14 men of Company M will proceed to scout the country north of Kingsville and along Crawford Fork, and return to camp at 12 m. of the 12th of June, 1864. Provide your men with one day's rations.
By order: JOHN WYCKOFF,
Captain. Commanding Detachment. 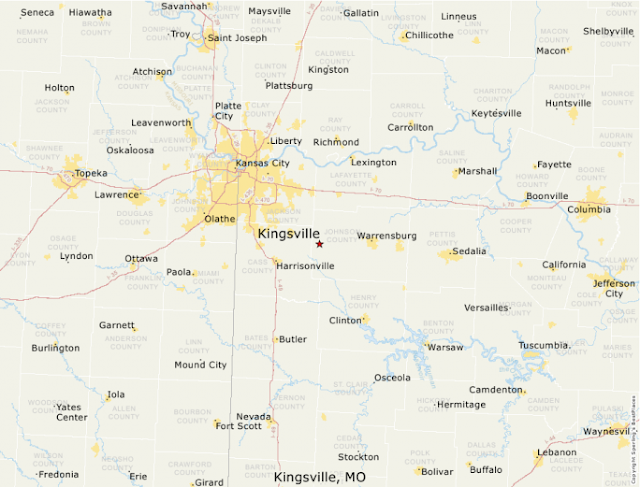 The following is the report of Corporal Parman :
HDQRS. Co. M, FIRST CAV., Mo. STATE MILITIA.
Holden. Mo., June 14, 1864.
CAPTAIN: I have the honor to report to you, in pursuance of your request, movements of the men belonging to Company M which I had on the scout under my command on the llth and 12th instant: I moved with my command from camp on Saturday, the llth instant, at 9 a. m., and proceeded western the north side of the railroad, traveling some 15 miles; thence turned in a southeast direction, and marched to a point near the railroad some 3 miles west of Kingsville. Most of the distance marched on this day was in the brush, and saw but little sign of bushwhackers, finding only one trail, which I followed some distance until we lost it by the parties separating. We camped for part of the night near a Mrs. Longacres, about one-half mile north of the railroad. On the morning of the 12th instant I moved with my men in a northeast direction from where I had camped, and had proceeded but a short distance when I discovered a large body of cavalry in my rear some 50 or 75 yards, and on the discovery of the enemy I formed my men in line and challenged the advancing party, who only increased their speed, and at this instant I ordered my men to fire on the enemy, which was done in a very few seconds. 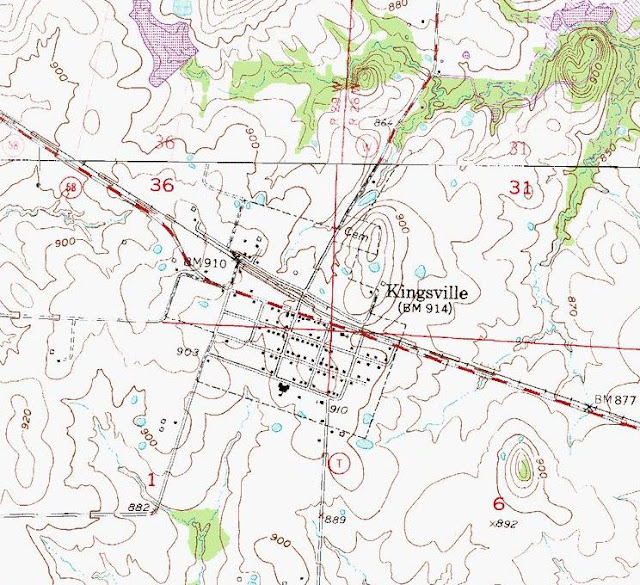 By this time my little detachment was entirely surrounded only a small space toward the brush. By this time the bullets from the enemy's lines were falling like hail among us, and several of my men were killed. I remained in front of my line until the enemy had passed me, even some of them between me and my own lines, at which time I moved with as possible speed to the left, engaged one of the enemy, firing at him twice, when he turned, and, as I was in; a helpless condition, my men nearly all killed, I made for camp with all speed possible. I feel satisfied that the enemy had been informed of my position and strength, as he had me flanked on the right and left before he showed himself in my rear. The attacking party was not less than 40 strong, and from the best information I have I think the whole command of the enemy did not fall short of 80 men, and probably 100. The enemy were all dressed in full Federal uniform and had the regular badges worn by our men on their hats and caps; small part of them were wearing Federal overcoats.