1866 James Stevens, stabbed to death at the courthouse of Johnson County, MO, Warrensburg, during a Sen. Francis Preston Blair speech.


Future senator Francis P. Blair of St. Louis was the unsuccessful Democratic vice presidential candidate in the 1868 election. Blair was the running mate of former New York governor Horatio Seymour. They lost the election to the Republican ticket of Ulysses S. Grant and Schuyler Colfax. 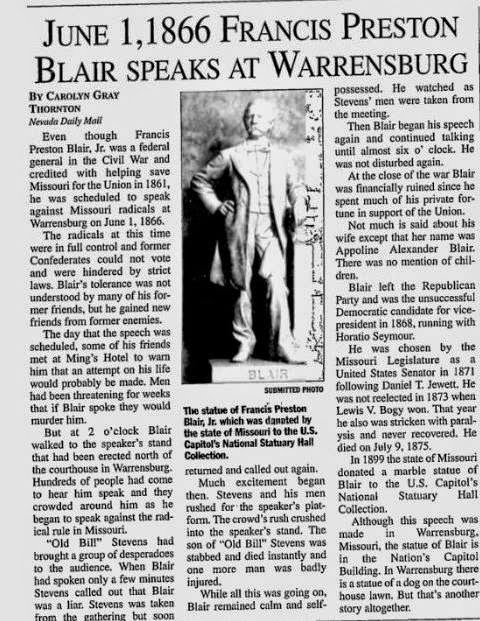 Gen. Blair Spoke at the Old Johnson County, MO Courthouse - Tensions Arose and One Man Was Stabbed To Death 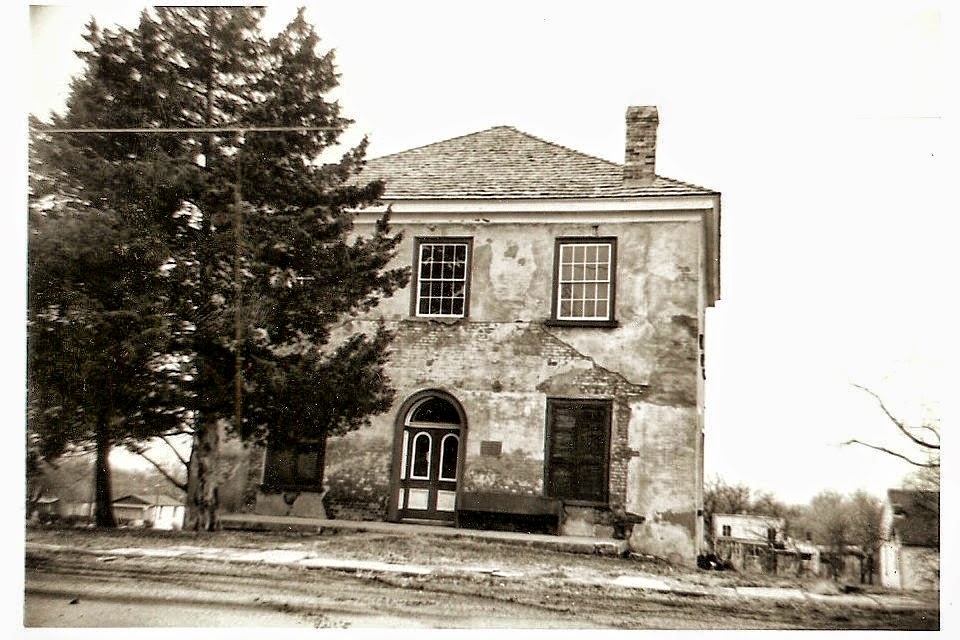 Original Courthouse, Johnson County, MO
Built in 1842
In 1866 like his father and brother he opposed the Congressional Reconstruction policy, and on that issue left the Republican Party. He was the unsuccessful Democratic candidate for vice president in 1868, running with Horatio Seymour. Blair contributed to the Democratic defeat by going on a speaking tour in which he framed the contest with Ulysses S. Grant and the pro-Reconstruction Republicans in stark racist terms, warning of the rule of "a semi-barbarous race of blacks who are worshipers of fetishes and polygamists" and wanted to "subject the white women to their unbridled lust." At least one Democratic Congressman saw Blair as the cause of Seymour's defeat, calling his behavior "stupid and indefensible."
Blair had an odd, minor notoriety, when on July 29, 1870, he was an accidental witness to an incident in a famous homicide case. Staying at the then famous Fifth Avenue Hotel, facing West 23rd Street off Fifth Avenue, Blair woke up to cries of help from across the street. He watched from his hotel window as two men ran out of a brownstone mansion across the street. They were two of the sons of Benjamin Nathan, the Vice President of the New York Stock Exchange, who had been bludgeoned to death the previous night. There was a series of hearings, and even suspicion towards several people, but the mystery was never solved.
In 1871 Blair was chosen by the Missouri Legislature as a United States Senator. On November 16, 1872, he was stricken down by paralysis, from which he never recovered. Largely owing to his stricken condition, he was defeated for reelection to the Senate in January 1873. Blair learned to write painfully with his left hand and continued his political efforts.
Blair's consuming interest in politics kept him active and a candidate for office until his death from a fall in 1875. He is interred in Bellefontaine Cemetery.
In 1899, the state of Missouri donated a marble statue of Blair to the U.S. Capitol's National Statuary Hall Collection.
General Francis Preston Blair, Jr and Staff

(1821–75). Missouri politician Francis Preston Blair, Jr., was active before and during the American Civil War and in the following Reconstruction period. He opposed slavery and secession but later came out against Radical Reconstruction and black suffrage.

February 19, On this day in 1821, Union General Francis Preston Blair Jr. is born in Lexington, Kentucky. The colorful Blair was instrumental in keeping Missouri part of the Union during the early stages of the Civil War. Blair’s father served as an advisor to several presidents. His namesake and youngest son was privileged and rebellious as a youth. As a college student, the younger Blair was expelled from the University of North Carolina and Yale for misconduct. He finally finished his degree at Princeton, but was denied graduation for participating in a wild party in his final week. Blair’s degree was bestowed a year later after an influential friend intervened on his behalf. Blair studied law in Kentucky and went onto practice in Missouri with his brother, Montgomery, who would later serve as U.S. postmaster general under President Abraham Lincoln. During the 1850s, Francis ran an anti-slave newspaper in St. Louis and served in the Missouri legislature. He was elected to the U.S. House of Representatives in 1856. Blair was opposed to the extension of slavery, even though he owned a few slaves himself. His stance led to his defeat for re-election in 1858. In 1860, Blair campaigned for Abraham Lincoln and also regained his congressional seat. When the Civil War erupted, he organized Missouri’s Unionist forces and helped save the federal arsenal in St. Louis from the Confederates. Blair personally organized seven regiments from Missouri, and became a brigadier general, winning the respect of his superiors, Ulysses S. Grant and William T. Sherman. Blair commanded a corps
12 January 1865 His Father, Blair House is Named for Him, Vice President's Office Next to the White House
Francis Preston Blair, Sr., aging Democratic political leader, conferred with President Jefferson Davis in Richmond on possible peace. Blair, unofficially but with apparent sanction of President Lincoln, presented suggestions to Davis. The Confederate President gave Blair a letter to Lincoln, which indicated Davis, was willing to enter into peace negotiations and that he would appoint an agent “to enter into conference, with a view to secure peace to the two countries.” Davis was not willing to give up independence for the South and the North’s entire policy was that “of one common country.” At least there had been talk between the two contending sides.

Blair House - Washington, DC Named for Francis Preston Blair, Jr's Father. Built in 1824, Blair House became politically central in Washington, D.C., the moment the Blair family took up residence in 1837. Francis Preston Blair was a circuit court clerk from Frankfort, Kentucky, whose editorials in his local newspaper attracted President Andrew Jackson’s attention. Jackson invited Blair to convert the Globe, a failing D.C. newspaper, into a pro-administration publication, and in 1830, Blair, his wife Eliza, and their three children moved to the nation's capital. Seven years later, they took up residence in the former home of Dr. Joseph Lovell, the first surgeon general of the U.S. Army. It would soon become known as Blair House. As editor of the Globe and the Congressional Globe (the first published proceedings of Congress) with partner John Cook Rives, Blair acquired a good deal of political power. Many political players, including presidents, sought his insight. He was the most influential member of President Jackson's informal group of advisors, the “Kitchen Cabinet,” and remained an important confidant to Jackson’s successor, Martin Van Buren. Abraham Lincoln also sought Blair’s counsel during his presidency and appointed Blair's eldest son, Montgomery, to his cabinet as Postmaster General. In 1859, Francis Preston Blair built a home at 1653 Pennsylvania Avenue, next to Blair House, for his daughter Elizabeth and her husband, Admiral Samuel Phillips Lee. This home, known as Lee House, is now an integral part of the Blair House complex. 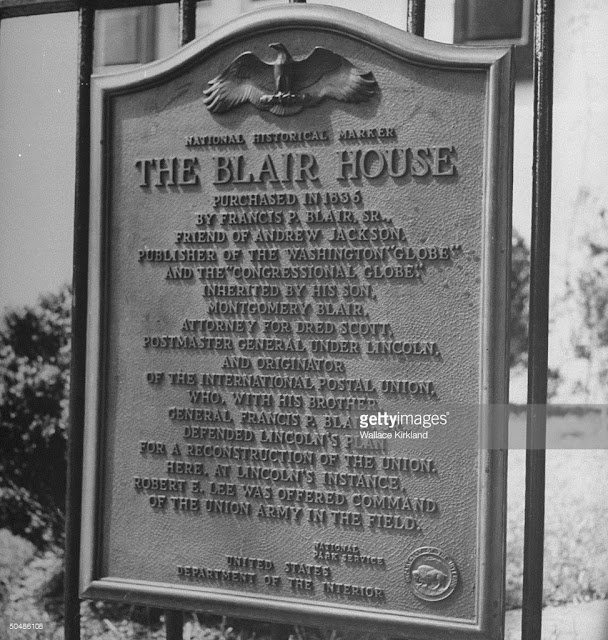 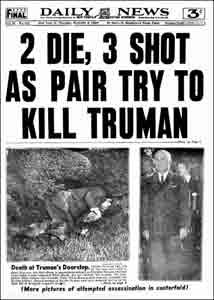