Report of Brig. Gen. James Totten, U. S. Army.
HEADQUARTERS DISTRICT OF CENTRAL MISSOURI,
Jefferson City, Mo., March 26, 1862.
CAPTAIN: I have the honor to state for the information of the major general commanding that I have just received official intelligence to the effect that on the evening of the 19th instant Capt. Thomas W. Houts, Missouri State Militia, commanding post at Warrensburg, Johnson County, having received information of the whereabouts of concealed powder, sent 15 men, under Lieut. A. W. Christian, to bring in the same to Warrensburg. The detachment was entirely successful, finding 125 kegs of powder (a portion of it damaged) buried in different places on the plantation of Mrs. Sarah B. Brinker, near Warrensburg. On the evening of the 22nd instant Captain Houts, Missouri State Militia, also sent 20 men, under Lieut. J. M. Jewell, to arrest several armed men who were supposed to be concealed in the house of Mrs. Burgess, about 10 miles southwest of Warrensburg. Lieutenant Jewell proceeded to the house and silently surrounded it. A woman, assuring him that there were no men in the house, opened the door. Instantly the rebels, 4 in number, sprang out, firing upon our men, who promptly returned the fire. It is thought that 1 of the party escaped unhurt. The other 3 were killed on the spot. Our loss was 1 killed and 1 badly wounded. The house was burned to the ground.

On the morning of the 23rd an attempt to arrest a desperate character met with resistance, when he was shot dead. On the evening of that day, the 23rd, an attempt was made by incendiaries to fire the town of Warrensburg, but by prompt action on the part of Captain Houts and his command the design was frustrated. Two frame buildings only were destroyed. Captain Houts adds that Johnson County is infested by a gang of marauders and murderers who are a terror to the loyal citizens, but they will receive prompt attention. All three of the officers mentioned in this report merit the highest commendation for the promptness, energy, and zeal exercised in these affairs, and Lieut. J. M. Jewell, Missouri State Militia, and his party deserve especial notice.
I am, captain, your obedient servant,
JAS. TOTTEN,
Brigadier- General, Commanding District.
Capt. N. H. McLEAN,
Assistant Adjutant- General, Saint Louis, Mo.

In Bruce Nichols' book, "The Civil War in Johnson County", Bruce mentions a Thomas W. Houts, who in 1861 "help lead the attempt to lynch the McCowns", then created the "Red Shirt Company", and was eventually appointed captain in the Seventh Missouri Cavalry; Mr. Houts evidently was at some point before the end of the war, promoted to Major.

Excerpt from the Bruce Nichols Book- 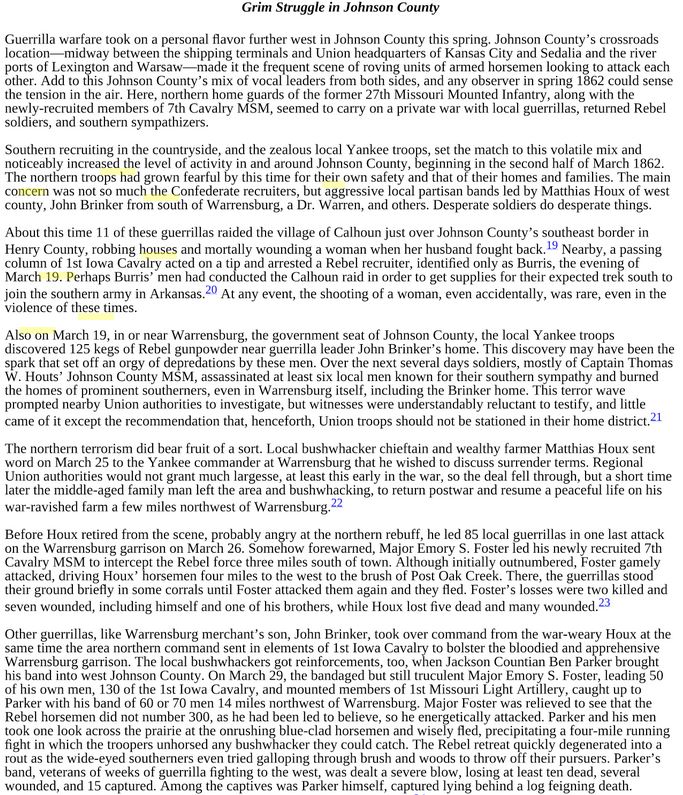