Minna and Ada Simms Everleigh (Lester) Lived In Warrensburg, MO at one Time - Later Became Madams of the Most Famous Brothel in America, in Chicago

Chicago’s Everleigh Club is the most famous brothel in USA history.
It was located in the notorious Levee district (Chicago, IL).
Minna and Ada Had Lived In Warrensburg, MO 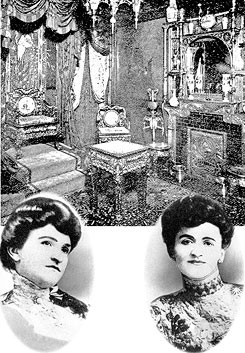 After buying Hankins's brothel at 2131-2133 South Dearborn Street, they fired all the women and completely redecorated the entire building with the most luxurious appointments available. Silk curtains, damask easy chairs, oriental rugs, mahogany tables, gold rimmed china and silver dinner ware, and perfumed fountains in every room. A $15,000 gold-leafed piano (the price is the equivalent of $369,205 in 2007) stood in the Music Room, mirrored ceilings, a library filled with finely bound volumes, an art gallery featuring nudes in gold frames -- no expense was spared. While the heavyweight boxer Jack Johnson thought the $57 gold spittoons in his café were worth boasting about, the patrons of the Everleigh Club were obliged to expectorate in $650 gold cuspidors. The Everleigh Club was described by Chicago's Vice Commission as "the most famous and luxurious house of prostitution in the country."
Prior to the opening of the Everleigh Club, Ada was responsible for recruiting talent for the club. She started by contacting her former employees in Omaha and spreading the word through brothels across the country. She conducted face-to-face interviews with all the applicants.
On the other hand, not all women who participated in this sort business had it that easy. Prostitution during the early 1900's in Chicago was a very rough experience for the majority of these women. While the Everleigh Club charged men fifty dollars for secluded time with one of their women, most prostitutes were only paid about twenty-five cents for their work.
Also, many of these young women were beaten and taken advantage of by the men who worked for them and sold them to different brothels. Even though some women were lucky enough to partake in the glamour that the Everleigh Club had to offer, the majority of prostitutes in this section of history in Chicago used this business as a way to get by during hard conditions in this time period. The clientele of the Everleigh House included captains of industry, important politicians and European nobility and royalty. Among them were Marshall Field, Jr., Edgar Lee Masters, Theodore Dreiser, Ring Lardner, John Warne Gates, Jack Johnson, and Prince Henry of Prussia.
The Everleigh sisters spared no expense in their redecoration of their brothel which they named the Everleigh Club. They replaced all old furnishings with new lavish furnishings including: Mahogany and walnut paneling, tapestries, oriental rugs, statuary, gold-nude paintings, gold-rim china and silver dinner ware, perfumed foundations in every room, a music parlor within a $15,000 gold-leafed piano, mirrored ceilings, and a library complete with finely bound volumes. A dozen parlors were orientated on the first floor.
Each parlor consisted of a certain theme such as: the Silver Parlor, the Gold Parlor, the Rose Parlor, or the Japanese Throne Room-all of which appealed to the varying groups of clientele the club received. The upstairs of the Everleigh Club held the private bedrooms were clientele could experience enjoy a more personal encounter with the women of his choosing alongside luxurious divans, damask chairs, gilt bathtubs and warbling canaries. As luxurious, the dining room's design emulated a private Pullman cart with the corresponding ornate gold and mahogany trimmings. The menu featured only the finest entrees such as: duck, caviar, lobster, deviled crab, fried oysters, goose capton, and an excellent selection of wine. It is due to all these extravagant amenities the Everleigh Club was dubbed "probably the most famous and luxurious house of prostitution in the country" by the Chicago Vice Commission.

The Everleigh quickly gained a reputation as an upscale gentleman's club, so much so that the Everleigh sisters were forced to turn away prospective clients even on opening day on February 1, 1900. The club's extensive popularity afforded Minna and Ada the opportunity to select their clientele. Only those men deemed suitable by Minna and Ada gained admittance into the Everleigh Club. The Everleigh sisters deemed a prospective client "worthy" to be admitted into the club if: the prospective client provided a letter of recommendation from an existing member, an engraved card, or through a formal introduction by Minna or Ada. These standards made the club extremely exclusive, indulging the desires of only the wealthy and influential men. "The cachet of being able to go there, just because they turned down so many people..It became an exclusive badge of honor just be to admitted."