10 July 15 - Jeroen from the Netherlands identified the bus today, it is a Fageol of Ohio manufactured bus from 1925, 22' coach.


This is a full production model at least 1925...
See the body differences between the 1924 (4 pages) and the 1925 (5 pages) catalog pages in the first column of the website Fageol Link
See the cover picture on the 1925 catalog... Fageol Safety Coach Broc pg0
The (shorter) cast aluminum cowling is the same as your picture. Early models were built up cowlings but not cast aluminum. See also the factory pictures, cowlings being finished... Fageol Factory -Cowlings 20s RMcC

The bus schedule on the Capitol Stage line, running between Kansas City and Jefferson City, via Sedalia has been changed. The change was made by J. Petroska, president and owner of the line, for the convenience of Sedalians and traveling men. Mr. Petroska stated that it was to his interest to feed the State Fair City with the best bus service, possible and the Sedalia business people. The car from Kansas City to Jefferson City arrives at the bus headquarters, La Moore Hotel, at 10:45 o’clock in the morning, in the afternoon at 1:05 and 6:25 o’clock.

DEC. 27, 1928 - NO BLAME FOUND AT INQUEST ON A FATAL ACCIDENT
Coroner Bishop Conducted It on Deaths of Three in Crash


EYE WITNESSES GAVE TESTIMONY Evidence Offered Collision Came After Bus Passed Two Automobiles. The jury was unable to place the blame was the verdict returned at the coroner’s inquest held at the court house this morning over the bodies of Thomas Stanley, Knob Noster; John Williams, Center town, and Miss Mary Griswold, Fortuna, who were killed Christmas afternoon In a collision between a Capitol Stage Line bus and a Missouri Pacific freight train. Members of the jury were, W. H. Carl, C. M. Sheets, C. D. Warren, "Dick" Henley, W, M. Hayden and ‘Jack’ Smith. The inquest, conducted by Dr. W. T. Bishop, who on December 12 took his oath of office as coroner, was held in the circuit court room, where a large crowd had congregated to hear the testimony given. The witnesses sworn In with, W. H. Burger and Joe Switzer, patrolmen; J. E. Walker. H. W. Ward, Ixmis Hast, and W. L. Hodges, members of the train crew; Mr. and Mr. Carl Van Arsdale and Herbert Emo. Dr. Bishop was assisted In conducting the Inquest by E. W. Couey, prosecuting attorney. and Walter H. Bohling prosecuting attorney-elect.

The layover bus departs from Sedalia for Kansas City at 7 o’clock in the morning. Along with the bus schedule a new ticket system is being installed. Tickets can now be sold on a through trip to Colorado, California and Omaha, West, through to the East coast, this being connected with the Purple Swan Company out of Kansas City and out of St. Louis. The Capitol Stage company adding three new parlor car Buick buses from Jefferson City to St. Louis via Mt. Sterling, Union, Gray’s Summit into St. Louis, this making it possible to reach these towns, which have no railroad service. The schedule out of Jefferson City is 7:30 a. m. and 2:30 p. m., out of St. Louis west, 7:30 a. m. and 2:30 p. m. 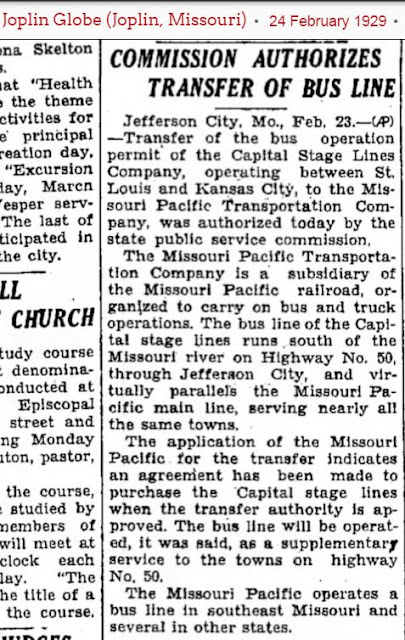 The bus picture up above shows it parked in front of the Dockery Gymnasium, picking up a sports team. Today at UCM it is the Harmon School of Business
Warrensburg, MO UCM Campus - CMSTC
Dr. Forrest C. "Phog" Allen, Allen Fieldhouse at KU, coached basketball for several years here in this building before leaving Warrensburg for Lawrence, KS.
Phog Allen served as the head basketball coach at Baker University (1905–1908), the University of Kansas (1907–1909, 1919–1956), Haskell Institute—now Haskell Indian Nations University (1908–1909), and Warrensburg Teachers College—now the University of Central Missouri (1912–1919), compiling a career college basketball record of 746–264. In his 39 seasons at the helm of the Kansas Jayhawks men's basketball program, his teams won 24 conference championships and three national titles. 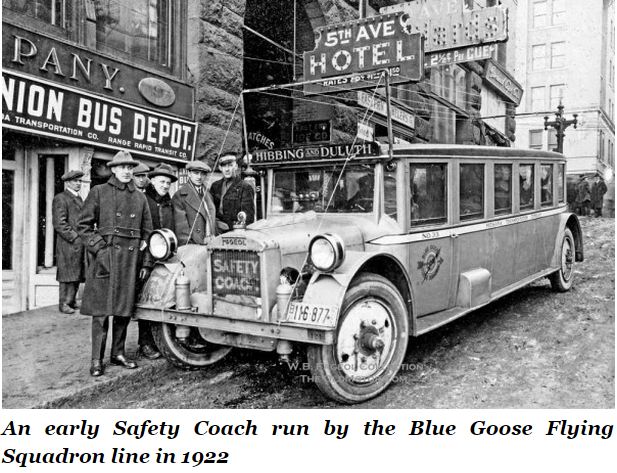 It may look awkward and a little odd to modern eyes, but the Fageol Safety Coach was a major milestone in the evolution of intercity bus design. It was just one of a long line of innovative and unconventional ideas of the four Fageol brothers during their long association. Before the Safety Coach, buses had been built on conventional truck frames. Their high center of gravity made them extremely prone to rollovers and high floors provided a steep climb for boarding passengers.

“Automotive Industries” of May 11, 1922 photo shows the Fageol trademark hood louvers along with a door for each seat
These two problems were eliminated by the double drop frame design of the Safety Coach. Extreme kick-ups over each axle lowered overall height to only 76 inches with a floor only 21 inches from the ground. A wide 64 inch track contributed to previously unheard of  stability on turns at highway speeds. Initially power was applied by a single overhead cam Hall-Scott four cylinder engine and a Brown-Lipe four speed gearbox with an overdrive top gear. Coupled to a specially-built, quiet running Timken worm gear differential with a 5.4 to 1 ratio 50 mile an hour highway speeds were easily achieved.

CP1      CP2      CP3
Early fabricated rear frame kick up – Laminated wooden wheel centers and cast aluminum brake shoes -Later cast steel kick up and air brake hardware .
The icing on the safety cake was the first use of air brakes on a motor coach. Developed by George Westinghouse in 1869 for railroad use, aside from providing smooth, progressive application and low operator effort on heavy vehicles, his design was almost entirely fail-safe. They functioned in a way that, should an air leak develop, braking force would beapplied unlike hydraulic systems that lose effectiveness when fluid pressure drops.
An oft repeated story implies that a Fageol Safety Coach may have led to the naming of the best known brand in intercity bus transportation today. Observing the rapid passage of one in Wisconsin, a person remarked that it was as swift as a greyhound dog. This was apparently overheard by a Mr. E.J. Stone who repeated it to Ed Eckstrom who was in the process of buying Stone’s bus company.
Eckstrom in turn incorporated the idea into advertising for his Safety Motor Coach line. His company was eventually acquired by the Hibbing, Minnesota based Motor Transit Corporation which became the Greyhound Corporation in 1929. You will find many more interesting bus and truck photos on The Old Motor. Top photo courtesy of the W.B. Fageol Collection.