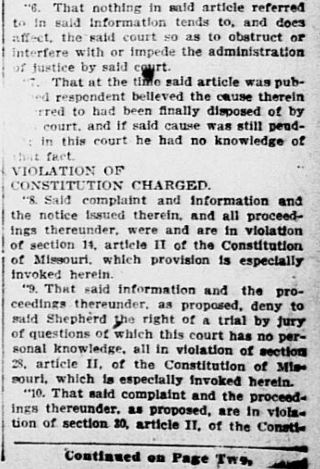 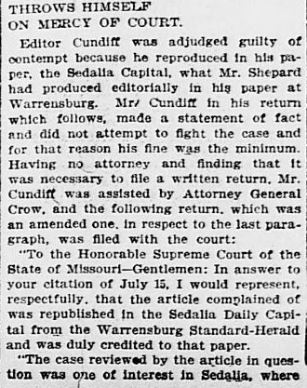 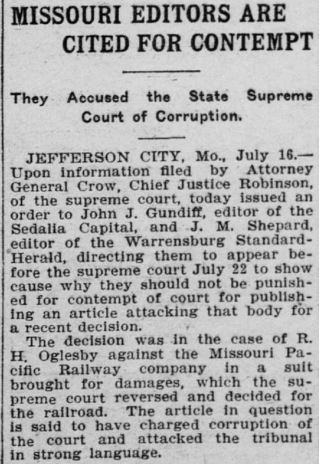 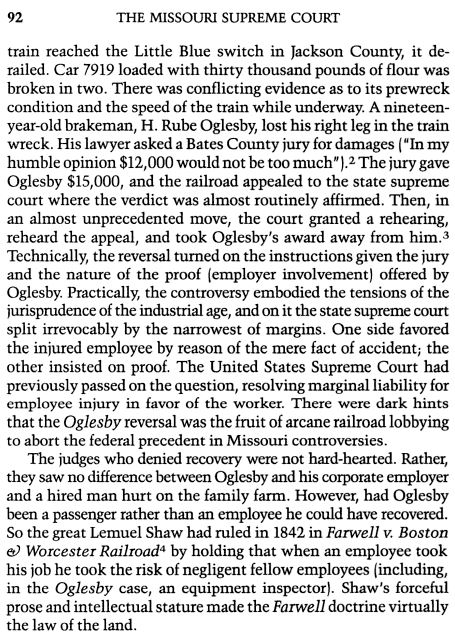 Rube Oglesby, a young brakeman, was smashed up in a railroad wreck on the Missouri Pacific, and was crippled for life. The cause of the wreck was a box car with worm-eaten sills. Rube Oglesby sued the Missouri Pacific. He got a judgment for $15,000. No money paid judgment appealed the case carried up to the Supreme Court; judgment affirmed by six judges out of seven. Later a rehearing was granted the railroad; the Supreme Court again affirmed judgment. A wait; case reopened, and the third time the Supreme Court of Missouri affirmed the judgment of $ 15,000 to Rube Oglesby. Once more the case was reopened, tried in a different county; again Oglesby got judgment; again up to the Supreme Court went the case, and on June 1 5, 1903, nearly eleven years after the accident, the Supreme Court of Missouri, the personnel of which had been gradually shifted, turned a back somersault, decided against Oglesby, and refused him another trial! A newspaper man at Oglesby's home was fined $500 by the Supreme Court for printing what he thought of it. The editor's fellow-townsmen wired the amount of the fine to the capital during the noon recess of court; welcomed him home with a brass band, and elected Rube Oglesby Railway Commissioner. His associates made him chairman of the Railway Commission. The Supreme Court of the United States had held that it was the duty of a railway company to its employees to use reasonable care to see that cars were in good condition. The Missouri Pacific did not want this doctrine upheld by the state court, and for this reason it fought Oglesby for eleven years in the courts. Do you like this brand of justice? Wouldn't it look from the outside as though justice had been sidetracked to let the Missouri Pacific s special go by? But it might be only an isolated case taken from a far-away state. If you think that's true, or if you find anything fishy that gets your goat Just read BIG BUSINESS AND THE BENCH, by C. P. Connolly and see how he has traced this sort of influence from state to state and from court to court. 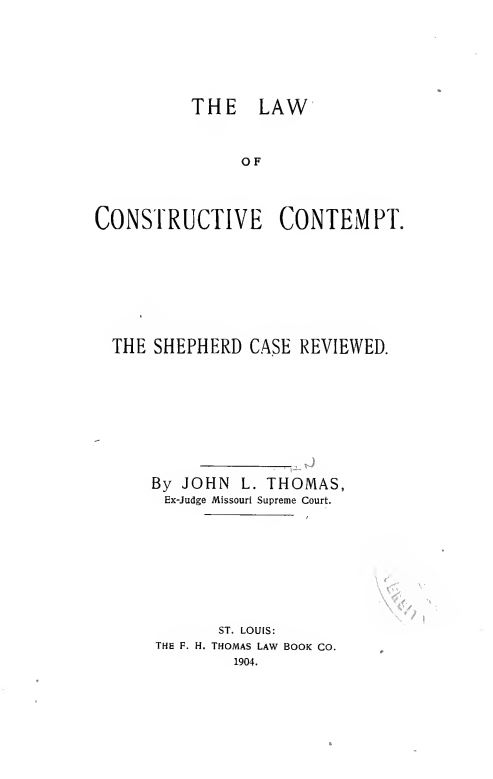 Boni judicis est ampliare jurisdictionem .
"Men are not corrupted by the exercise of a power or debased by the habit of obedience: but by the exercise of power which, they believe to be illegal and by obedience to a rule, which they consider to be usurped and oppressive.'' — De Tocquevix,le.

The Law of Constructive Contempt.
THE FREEDOM OF THE PRESS —
THE SHEPHERD CONTEMPT CASE
REVIEWED.
PRELIMINARY STATEMENT.
In a proceeding, by attachment for contempt,against J. M. Shepherd, editor of the Warrensburg Standard Herald, the Supreme Court of Missouri, in July, 1903, assumed jurisdiction to try and fine Mr. Shepherd for publishing, in his paper, an editorial, which the court held to be a libel upon itself.
This was the first time the Supreme Court, or any other court in Missouri, ever assumed to exercise such jurisdiction in such case.
The people had supposed for eighty years that when a person chose to criticise any officer or judge of the State, by newspaper  publication, he would enjoy the right to be  tried by a jury of his peers, for any alleged abuse of his privilege of saying, writing, or publishing " whatever he will on any subject; " and this action of the court created almost universal surprise among the people, and it has brought to the fore, again, a question that a century or more ago engaged the energies and abilities of the wisest statesmen
and publicists of England and the United States.  In October, 1903, the Supreme Court inbanc, through Mr. Justice Marshall, filed an opinion, in which all concurred, giving, at great length, its reasons for its assumption of jurisdiction in the case, and it is this opinion I propose to review in this paper. Book Link

A Brief History of the Missouri Supreme Court
The Supreme Court of Missouri was created in 1820, with the adoption of the state's first constitution. As members of the state's highest court, Supreme Court of Missouri judges review important and often controversial legal issues that affect the lives of the state's citizens.
Originally, Missouri's Supreme Court had only three judges: Matthias McGirk, John D. Cook, and John Rice Jones. In 1872, the court expanded to five judges and again in 1890 to the current seven judges. The 20th Century saw more cases brought before the judges. In response to the heavier caseload, the Court was authorized to appoint four commissioners to assist with hearing cases and drafting opinions. Commissioners continued to assist Supreme Court judges until 1970, when a constitutional amendment brought the practice to an end.
For its first fifty-four years, the Court held session in various cities, rotating between St. Louis, St. Charles, Jackson, and Franklin. At various times, the Court also sat at Fayette, Bowling Green, Boonville, Palmyra, Potosi, Lexington, Columbia, Hannibal, Cape Girardeau, and St. Joseph. The 1875 Constitution provided for a permanent seat in Jefferson City. The current red-brick Supreme Court building was completed in 1907.