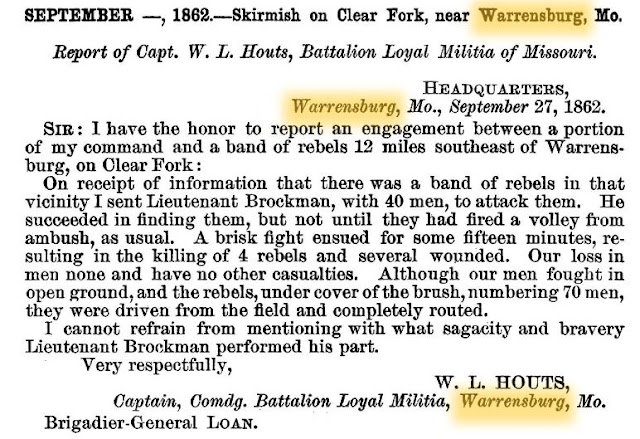 Brig. General Benjamin F. Loan, Photo by Mathew Brady. National Archives.
SEPTEMBER 7 1862.—Skirmish on Clear Fork, near Warrensburg, Mo. Report of Capt. W. L. Houts, Battalion Loyal Militia of Missouri. HEADQUARTERS, Warrensburg, Mo., September 27, 1862.
SIR: I have the honor to report an engagement between a portion of my command and a band of rebels 12 miles southeast of Warrensburg, on Clear Fork: On receipt of information that there was a band of rebels in that vicinity I sent Lieutenant Brockman, with 40 men, to attack them. He succeeded in finding them, but not until they had fired a volley from ambush, as usual. A brisk fight ensued for some fifteen minutes, resulting in the killing of 4 rebels and several wounded. Our loss in men none and have no other casualties. Although our men fought in open ground, and the rebels, under cover of the brush, numbering 70 men, they were driven from the field and completely routed. I cannot refrain from mentioning with what saga, city, and bravery Lieutenant Brockman performed his part.
Very respectfully,
W. L. HOUTS,
Captain, Comdg. Battalion Loyal Militia, Warrensburg, Mo.
Brigadier-General LOAN.
Benjamin Franklin Loan (October 4, 1819 – March 30, 1881) was a U.S. Representative from Missouri, as well as a Missouri State Militia general in service to the Union during the American Civil War.
Biography
Benjamin F. Loan was born in Hardinsburg, Kentucky. He pursued an academic course and received a college education. He studied law in Kentucky and then moved to St. Joseph, Missouri, in 1838. He was admitted to the bar in 1840 and practiced in St. Joseph.
With the outbreak of the Civil War, he was commissioned as a brigadier general in the Federal Missouri State Militia on November 27, 1861. General Loan participated in counter-guerrilla operations, including the victory against Colonel John A. Poindexter's irregular cavalry at the Battle of Yellow Creek on August 13, 1862. Loan was honorably discharged on June 8, 1863, and returned home.
Loan was elected as an Unconditional Unionist to the Thirty-eighth Congress and reelected as a Republican to the Thirty-ninth and Fortieth Congresses (March 4, 1863 – March 3, 1869). He served as chairman of the Committee on Revolutionary Pensions (Fortieth Congress). He was an unsuccessful candidate for reelection in 1868 to the Forty-first Congress.
He was appointed by President Ulysses S. Grant as a member of the board of visitors to the United States Military Academy in 1869. He resumed the practice of law in St. Joseph, Missouri, and served as delegate to the Republican National Convention in 1876. He was an unsuccessful candidate for election in 1876 to the Forty-fifth Congress.
Benjamin Loan died in St. Joseph, Missouri, and was interred in Mount Mora Cemetery.