On September 20, 1918, Charles E. Matthews died from wounds while serving in the U.S. Army. Matthews died in France and was buried in the Centerview, Missouri cemetery. His death was reported officially on 15 October 1918.

The weather remained bad on Sept. 13. US troops began muscling enemy forces out of the salient, and the Americans began extensive use of patrols of one or two aircraft to do armed reconnaissance. There was a moderate increase in enemy aircraft, reflected in the 12 combats out of 393 sorties. Nine pilots and six observers came up missing. Two enemy airplanes were confirmed shot down, and there were claims for five others.On the first day of battle, the Americans flew 390 sorties and dropped 14,300 pounds of bombs. Although there were only 11 aerial combats reported, there were two unconfirmed victories. Among the American airmen, 11 pilots and four observers were listed as missing.

Organizations served in, with dates of assignments and transfers:
38 CO 164 DEP BRIG TO 15 MAY/18;
CO L 356 INFANTRY TO DISCHARGE
Grades, with date of appointment: PVT
Engagements:
Wounds or other injuries received in action:
Served overseas from † 6/4/1918 To † 9/20/1918
FROM CAMP FUNSTON, KANSAS,
DIED 20 SEP 1918 OF WOUNDS RECEIVED IN ACTION; FATHER, WILLIAM H. MATTHEWS, CENTERVIEW, MO NOTIFIED

The Battle of Saint-Mihiel was a World War I battle fought between September 12–15, 1918, involving the American Expeditionary Force and 48,000 French troops under the command of U.S. general John J. Pershing against German positions. The United States Army Air Service (which later became the United States Air Force) played a significant role in this action.

This battle marked the first use of the terms 'D-Day' and 'H-Hour' by the Americans.

The attack at the St. Mihiel Salient was part of a plan by Pershing in which he hoped that the United States would break through the German lines and capture the fortified city of Metz. It was one of the first U.S. solo offensives in World War I and the attack caught the Germans in the process of retreating. This meant that their artillery were out of place and the American attack proved more successful than expected. Their strong blow increased their stature in the eyes of the French and British forces, but again demonstrated the critical role of artillery during World War I and the difficulty of supplying the massive World War I armies while they were on the move. The U.S. attack faltered as artillery and food supplies were left behind on the muddy roads. The attack on Metz was not realized, as the Germans refortified their positions and the Americans then turned their efforts to the Meuse-Argonne offensive.
Quick Facts St. Mihiel

Where: Southeast of Verdun When: September 12 - 16, 1918
AEF Units Participating: US First Army Composed of Three American and One French Corps US Commander: General John J. Pershing
Opposing Forces: German Detachment C
Memorable For: First US Operation and Victory by an Independent American Army

The battle of St. Mihel was the first independent attack from America in WWI. On 30 August 1918, the American Army was ready to go into battle. (Rickard, J)


The army was deployed to the south side of the St. Mihiel to strengthen the French line and help defeat the Germans. The Germans began to retreat on September 11. The Americans attacked the next morning with 2,900 guns and French Tanks. The Germans were outnumbered and out of position.(Rickard, J)
General John Pershing was commander of the American Expeditionary Forces, he came to the conclusion that a mix of the heavy British tanks and the light French tanks was the best option for tank warfare.
Outcome- In 36 hours Americans killed and wounded 5,000, they captured 13,000 prisoners and 466 guns. Americans suffered 7,000 casualties. (Rickard, J)


Russell Crawford was only eighteen when he lost his life in the South Pacific during World War II. Crawford was attending Warrensburg High School when he enlisted in the U.S. Navy. He was buried at sea. (near Cape Torokina, Bougainville, Solomon Islands) Following World War II, the post was renamed the Matthews-Crawford Post 131 and was re-chartered in October 1946 in honor of Russell Crawford. Again the honor was bestowed upon the first area man to lose his life while serving in war time. 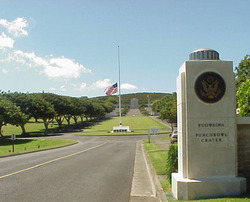 Death of Seaman 2nd Class Russell Levan Crawford, off the coast of Papua New Guinea from a Dive Bomber attack, 1 November 1943.
http://en.wikipedia.org/wiki/USS_Wadsworth_(DD-516)
Wadsworth subsequently joined other units of Destroyer Division 45 (DesDiv 45) as part of the protective screen for a dozen troop transports, Task Group 31.5 (TG 31.5), bound for the Solomons and the initial landings of men in Empress Augusta Bay, Cape Torokina, Bougainville. The expeditionary force arrived off the beach at Cape Torokina in the early morning darkness on 1 November. Then Wadsworth led in the initial force, a group of minesweepers, into Empress Augusta Bay.
At 05:47, Wadsworth's 5 inch guns began to bark, and her shells destroyed enemy barges along the shoreline. For nearly two hours, the warship blasted targets behind the beaches, before she and sister ship Sigourney took a patrol station to protect the transports which were landing troops. Suddenly, six enemy planes plunged out of the sun at the two destroyers, and the first of six bombs exploded only 25 yards to starboard of Wadsworth. Two other bombs burst within 500 yards of her beam, one to starboard and one to port. Then, a near-miss 20 feet from her port side sprayed the after section of the ship with fragments that killed two Wadsworth sailors and wounded nine others. On the other hand, the two destroyers each bagged two of the attackers.
Destroyer Squadron 45 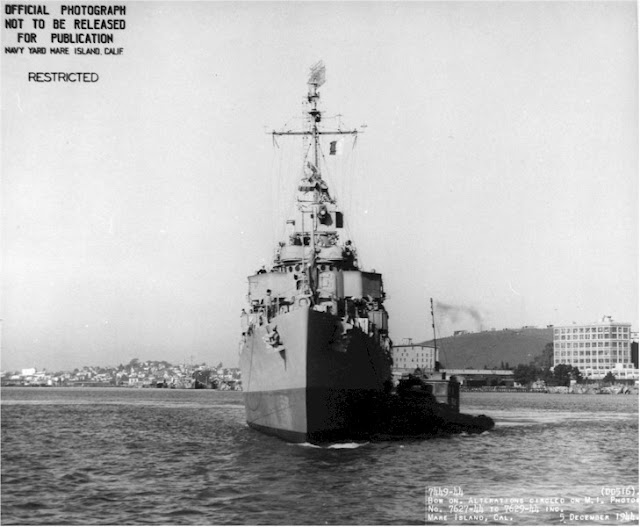 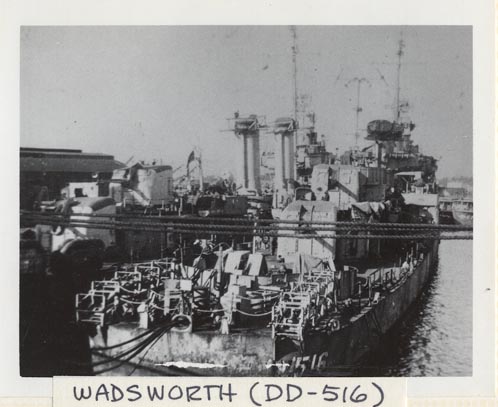 They (DESRON 45) formed the escort for the invasion of Bougainville, 1 November 1943 and then earned stars for operations in the Pacific war including the consolidation of the northern Solomon Islands, the Bismarck Archipelago operation and the invasions of the Mariana Islands and Palau.

NOVEMBER 1, 1943. D-DAY FOR BOUGAINVILLE LANDING. The first troops put ashore on Bougainville were 13,000 Marines and a convoy of 12 transports screened by 11 destroyers under command of Commander Ralph Earl, ComDesRon-45. Ships were, USS Fullam, Guest, Bennett, Hudson, Anthony, Wadsworth, Terry, Braine, Sigourney, Conway and Renshaw. A few Jap aircraft struck D-Day morning, but were intercepted by our fighters. The only ship casualty was a near hit to the Wadsworth that killed two of the crew. On D-Day afternoon about 100 Jap Carrier planes were intercepted by our pilots. Not one ship or landing craft was hit by the attacking planes. 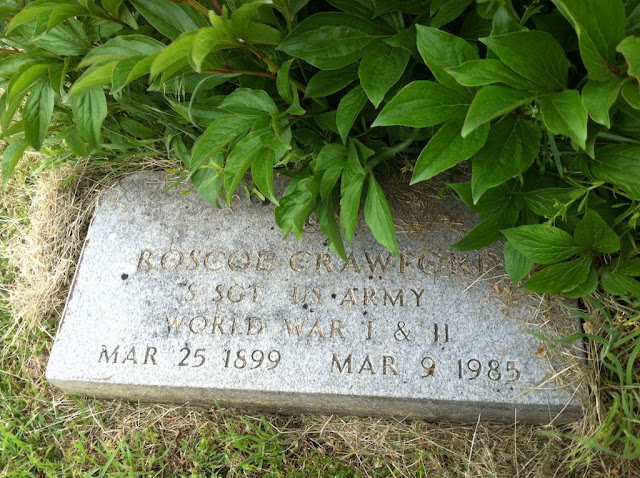 Buddy Baker remembers Russell Crawford well. They were in school together and played together as kids.

Ask Buddy if Russell's Father Roscoe worked for the City of Warrensburg? I remember a Roscoe when I was little, very nice man and did not know of his terrible loss until just recently.