This Mob Hanging Was in Montana


"You are charged with being a member of the band of robbers that have for so long infested this country." "Well?" The judge continued, "What have you to say in defense of these charges?" "Nothing." Judge, "Are you guilty as charged?" "You are the judge, not I." Judge. "Then you have no defense to make?" "No; it would be of no use. Your court sits to convict, not to try." Judge!" Confess your crimes and it may not go hard with you." "I confess nothing." The judge then addressed the jury: "Gentlemen, what shall be done with the prisoner?" The jury replied, unanimously, "Hang him." The court then proceeded to sentence: "Jeff Collins, I sentence you to be hung by the neck until dead! dead!! dead!!!" Instantly a door on the east side of the building flew open, and the crowd started, leading the prisoner with ropes. It is needless to say that the jury had decided the fate of Collins before he was brought before them. The party passed out East Culton Street to McGuire, thence south along the railroad bridge, and stopped under the spreading branches of an old black-jack tree, where the execution took place.
A rope was adjusted around his neck, thence over a limb above. Judge, "Have you any word to leave?" "Yes. Tell my mother that I died a brave, but innocent boy." At that moment several men fell back on the rope, and Collins was drawn from the earth, to descend no more alive. The body was allowed to hang that night and the next day, but disappeared the next night. It is supposed that his body was dissected by the medical fraternity of this city, and that the skeleton was consumed in the great fire of 1867. The train bell tapped. Hear it not Stephens, Andrews? "For it’s a bell that summons thee to Heaven or to hell."


The next two individuals heard from were Thomas Stephens, son of Bill Stephens, and Morg. Andrews. The authorities of Johnson county being informed that they were in the jail at Lawrence, Kansas, sent for them. They were delivered to the officers according to law, a requisition having first been served upon the governor of Kansas by the governor of Missouri. The prisoners were both young, neither of them being over eighteen or nineteen years of age. Stephens was tall, dark, black hair and eyes. Andrews vice versa.

The next case in which the vigilantes took any part, was that of Thos. W. Little, who was arrested with another man named Myers, and brought to Warrensburg. The charges against Little were very insignificant, and about as follows: Some man was knocked down and robbed of a few dollars, west of Post Oak bridge. Little was charged with the offense, and was tried for it; but the committee failed to convict, from the fact that there was no evidence to substantiate the charge, and the prisoner was sentenced to jail. A few nights afterwards another trial was held in the old billiard hall west of the square, in West End. Several prominent men from Dover were there for the purpose of proving an alibi, among them Dr. Ming. The statement of all these gentlemen went to prove that Little, at the time of the alleged robbery, was in Dover. It was put to a vote whether the committee should hang him or not. The vote stood about as follows: For acquittal, 344; for convicting, 28. From that count it will be seen that the committee were in favor, as a majority of letting the accused one go free. By their vote they pronounced him "not guilty, as charged." After these proceedings the Committee dispersed. But the strangest feature of this case was the fact, that some ten or twelve of our most prominent citizens, after waiting so long, joined the committee that very night and urged with enthusiastic appeals, the necessity of killing Tom Little. "No voice of friendly salutation cheered him; none wished for him to live, or bade God spare him; But through a staring, ghastly-looking crowd, Unhailed, unblessed, with heavy heart he was dragged." It was a warm, sultry, moonlight night in August. About 3 o'clock, a.m., some fifteen or twenty men gathered at the county jail and demanded Little. The jailer without any resistance stood by and saw the jail door battered down, and the prisoner dragged out. He was taken down Main street to a small elm tree, where he was hung.
Not by the vigilance committee or by their order, but by men who live in Warrensburg, and who never had any connection with the committee until the night of the disgraceful murder of Thomas W. Little, and who very probably joined for the purpose of using their influence in hanging him, and failing to carry the vote, they concluded to hang him on their own responsibility, and against the wishes of a majority of the committee. Having no old grudge against Myers, these new members of the committee did not see proper to murder him. The hanging of Little wound up the career of the vigilance committee in Johnson County, as an organization. Strife and contentions arose in the organization. Leaders were arrayed against one another. The murder of Little was condemned by the masses, as an outrage. Might had triumphed over right. The committee now assumed the costume of night itself, and became powerful and dangerous. It was no longer a terror to the Sanders and Stephens’s gang, for they were dead or scattered to the four winds of heaven, but, became a terror to themselves and to the community at large. It was no longer an organized body, but a blind, passionate mob, threatening to destroy the lives and property of our oldest and best citizens, and were only deterred from executing their threats by the grim muzzle of shot-guns and revolvers. The Journal office, then a democratic paper, was guarded to prevent them destroying the presses and type, simply because it had published an article telling the committee that they had gone far enough, and asking them to disband.
All executions, after the hanging of young Stephens and Andrews, were without the consent of the committee and against their wishes.


The next victim of these men was one James M. Sims, a half crazy fellow who was charged with stealing a horse. The facts are about as follows: In the month of September, a boy went to Post Oak Bridge for the purpose of watering a horse. As he returned to town he was met by Sims, who asked what he would take for the horse. The boy replied that the horse was not for sale. Sims then asked if the horse could pace; the boy answered that he could. Sims then asked permission to try him; the boy dismounted and Sims got on the horse and galloped off. He was followed and captured southeast of Clinton, on Grand River. The parties having him in charge, returned to Warrensburg the next day. Before they reached town they were met and told that they had better change their course, as there were men waiting in town for them to arrive, with the intention of taking the prisoner from them. They made a circuit coming in near Smith's mill, West End, where they were met by some fifty armed men, who demanded the prisoner. He was no sooner demanded than given up; the party then proceeded to the creek where the execution took place. They informed the prisoner that they were going to kill him. He told them that he couldn't help it, and asked for paper and pencil; they were given him when he wrote the following note on the horn of his saddle:
"WARRENSBURG, September 1867. Dear Mollie: As I write, I am only waiting to face death. I am now going to die, and as you know, I die for your sake, and my soul shall cling to yours, whether to heaven or hell it goes. Goodbye. J. M. SIMS."
After writing this note, he climbed up in a wagon that stood under the tree, remarking, that he would rather be on top of the limb than under it.

The rope was placed around his neck, and the wagon driven out from under Sims, the ninth victim of that Reign of Terror.
As a sequel to a paragraph of the foregoing sketch we submit the following entry from a diary made at the time: "JONES CREEK, January 22, 1879. It has been a miserably disagreeable day. Snow, rain and sleet following alternately, with a strong northeast wind. The country passed through today is very sparingly settled, and I have had trouble to find lodging. The old settlers here show but little hospitality, and that much bested 'christian charity' is more liable to be found in poetry and songs, than in reality. My efforts were at last rewarded by being permitted to stopover night, provided I could 'put up with the fare.' This I eagerly consented to do, for I was tired, cold and hungry. Upon entering the old fashioned Missouri double log house, I found a splendid fire burning in the huge old fire place, and a warm supper on the table, awaiting the attack. During the evening I learned that the name of 'mine host' was William Collins, known here as 'Uncle Billey,' and that he was the father of Jeff. When they learned where I was from, the old lady became very much excited, and very abusive. The family consists of the old gentleman and lady and one daughter at home. The young lady is a decided brunette, and very pretty featured. At the time of the execution of Jeff, she was about thirteen years old, and the shock occasioned by the news of the death of her favorite brother was too much for her, and threw her into a long spell of brain fever. Upon recovering her physical strength, it was found that her mental faculties were gone, and she has been hopelessly insane from that time to this. The gravest charge against Jeff Collins; was the murder of one John Barbee, an ex-bushwhacker near Granby. I learned from parties who were conversant with the facts in the case, that Barbee was not killed by Collins. The facts in the case are as follows: Collins and Barbee met at a saloon in Granby, where they had some altercation over some differences. The affair was supposed to have been amicably settled between them, and Collins started home on a neighbor's wagon, and was overtaken by Barbee on horseback, who lived in same neighborhood, when the trouble was renewed. Collins told Barbee that they would settle the affair then and there; at the same time leaping from the wagon, drawing his revolver and firing. Barbee jumped from his horse and took to the woods with a pistol ball through his hand. This is the only case that has come under my immediate observation since those premature executions, and I have made up my mind that if the charges preferred against the rest of those unfortunate victims, were as recklessly made, and the proof as malicious as in the case of Jeff Collins, that it would have been far better to have left it undone." 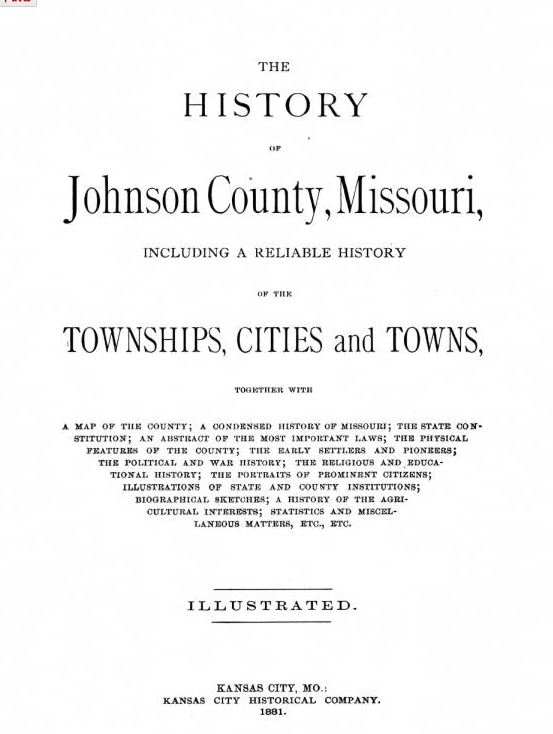