What a "Bazoo" Reporter "Caught On" to at the Quarry City. The People Wild With Excitement Regarding the Mineral Springs. A Batch of Items for the Edification or the "Bazoo's" Sunday Readers.
On Friday evening a Bazoo representative boarded a coach on the Missouri Pacific road and hired himself to Warrensburg, where he secured the following items of interest for the entertainment and instruction of the readers of the great religious daily the Sunday Morning Bazoo: Miss Kate Robinson, who has charge of the Simmons house dining room, formerly of the Garrison house, Sedalia, has been" quite ill with fever for the past few days, and unable to attend to her duties. On Friday evening she was reported better, but her physician says it will be several days before she will be able to leave her room. Bob Dalton, of the Eads house, is as happy as a clam at high tide, he has had his office enlarged to nearly twice its former size, and when all the improvements contemplated are completed he will have one of the neatest and most comfortable hang-outs in the state. He deserves it, for a more courteous landlord never scratched a pen.
Cont.
Prof. Osborne, president of the faculty of the normal school, returned to the 'Burg on Friday evening from a brief visit to Boonville. The school opens on the first Monday in September, and the first three or four days will be spent in examinations. The prospects for an increased attendance are remarkably good, and those in charge are consequently jubilant. Dan D. Williams is home again, after an absence at some celebrated western watering place where health is restored to the invalid. He says he never felt better, and as he has not 'smoked a cigar for nearly three months something very unusual with him the Bazoo man is inclined to the opinion that the trip did him at least a small amount of good.
Warrensburg is like unto Sedalia in one respect, at least. There has not a drop of rain fallen in the town for weeks, although neighborhoods but a short distance away were blessed on Friday with quite refreshing showers. Owing to the absence of a street sprinkler, the dust is nearly shoe top deep, and the Quarry City it is far from happy average. Mr. O. D. Hawkins, the well-known justice of the peace, left on Thursday for a visit to the northern part of the state, where he was summoned to attend a family reunion. Mr. Hawkins is an old-time printer and a first-class one, too but he has laid away the stick and rule, and now earns his bread in a manner less laborious than in the days when the writer first knew him.

Hogs are allowed to patrol the streets of Warrensburg but for sanitary purposes only. The citizens devour daily several wagon loads of watermelons, and the rinds are cast into the streets, where they would lie allowed to rot and give forth a disagreeable stench were it not for the "porker." His hogship quietly swoops down upon the remnants, and thus, in all probability, cholera, yellow fever, etc., is averted.

The Simmons house, under the management of Phelps A. Williams, seems to be prospering to the highest degree. The proprietors arc gentlemen who thoroughly understand their business, and their success is easily accounted for. Mr. Williams is also an 'old newspaper man, and the pencil pusher who is not at home in his company would be dissatisfied with a seat on the throne in heaven. Ed. and Gus Cress are still holding forth at Alamosa, Col., where the former is employed as superintendent of water service for the Denver & Rio Grande railway. Gus is not doing anything, and is not very favorably impressed with the country. He compares it to "hell, with all the fire extinguished." Along the line of the Pacific road, between Knob Noster and Warrensburg, the effects of the continued drought are easily perceptible. Besides the injury to corn, the grass is all burned out and the general appearance of the country would indicate that it was the middle of October instead of August. In many places fences and ricks of grain have been burned, caused by sparks from the railway engines. The faculty of the state normal school are employing there leisure time in endeavoring to secure rooms and boarding places for the large number of scholars who will be in attendance during the present term. They experience not a little difficulty, as the supply seems inadequate to the demand. In this respect the Quarry City is deficient, and steps: should be taken looking toward some improvement. The two newspaper offices of the Quarry City seem to be prospering, and the managers of each are consequently happy. The Journal-Democrat has one of the best appointed country establishments in the state, and Messrs. Baldwin & Richards, of the Standard, are turning out from their job room many evidences of their skill in this direction. It would be difficult to find a more companionable set of gentlemen than the press gang of the 'Burg.
Warrensburg is a temperance town at least it is supposed to be such w the county court refuses to grant license to those who would otherwise engage in the traffic. Notwithstanding this, there is one place where stale beer is sold, open and above board, besides several drug stores where the old toper can purchase the meanest of red-eve by the drink or gallon. Oh, yes, Warrensburg is a fine prohibition city if you don't care...  Frank T. Smith, Kansas Citv exposition. representing the visited Warrensburg Friday evening and billed the town in a manner that gives conclusive proof that he thoroughly understands his business. he had, on arriving in the city, a ton of paper under the hoodlums in the him as soon as he something less than his arms, and all 'Burg surrounded alighted from 'the train, supposing him to be advance agent for a circus or variety entertainment.


In conversation with prominent farmers residing near the Quarry City the Bazoo man learned that the outlook for the corn crop was indeed discouraging. The long spell of dry weather has burned it up to a great extent, and in many cases it is being cut up for fodder. The general impression is that corn will command from seventy-five cents to one dollar per bushel this fall, and those who have any on hand are not anxious to dispose of "it at any price.” Miller's drug store, opposite Eads Hotel, has been beautified by a coat of paint. In addition, a life-size Ute Indian stands out in bold relief on the front wall, which is an artistic piece of painting. In fact, it is so life-like that when John Crutchfield first saw it he imagined himself again in the Ute reservation, and immediately started for the railroad at a 2:10 gait. It took Bob Dalton's most seductive and persuasive words to assure "Crutch" that there was not any danger.

Postmaster Brown was thoroughly incensed a couple of days ago. He was informed that the directors had decided to place one negro pupil in each of the public school rooms attended by white children, and this was the cause of his displeasure. Brown is a good republican, but this was more than he could swallow. After a little explanation, however, volunteered by L. Morrow and others, he concluded it was a good move, and also a saving to the county, and he now favors the project. The Bazoo man would suggest that every other pupil be a female.


On Thursday evening Miss Jennie Wright, an accomplished young lady of the 'Burg, and a graduate of the normal school last year, was united in marriage to Mr. Cook, a wealthy cattle dealer of Texas. The ceremony wan performed at the residence of the bride, by Rev. G. V. Ridley, formerly pastor of the Cumberland Presbyterian Church, and a number of friends were present to offer congratulations. They left at once for Texas, and carried with them the best wishes of the many acquaintances of the young bride.
The citizens of Warrensburg are "all broken up," so to speak, over their mineral springs. They are situated about one-half mile north of the Eads house, on a farm owned by George Colburn, (Colburn Springs, later Elecrtric Springs) of the Johnson County Savings bank. During the past week it is estimated that from two hundred to three hundred people have visited them daily, and the excitement in regard to them "is constantly increasing. Mr. Colburn, one of the wealthiest citizens of the 'Burg contemplates improving them at once, and it is quite probable that a commodious note will be erected in close proximity at no distant day.
John M. Crutchfield, known to the readers of the Bazoo as "Crutchie Field,' returned to Warrensburg Thursday evening. after a seven weeks absence in Colorado and New Mexico. He went out on a pleasure trip, and in conversation with the Bazoo's representative said he had fun and brought many samples of ore, unique stones without number, and flowers picked from the crags of Pike's Peak. While absent he encountered a number of Ute Indians on the warpath, which little incident seems to have had a depressing influence upon his spirits. He will hereafter remain in the Quarry City, and it is intimated that at no distant day will take unto himself a blushing bride. 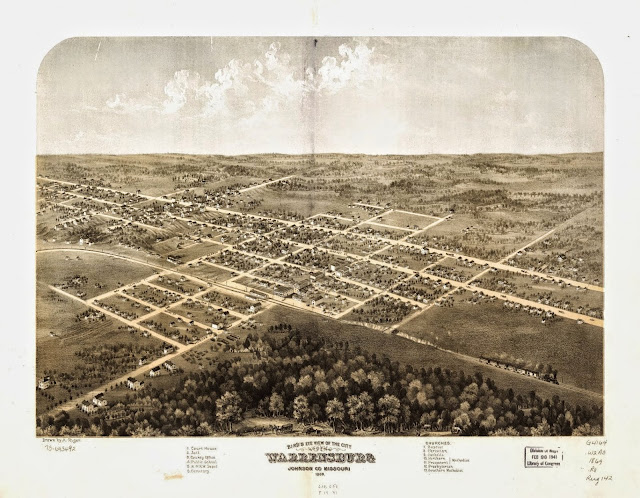