Governor Eric Greitens held a public signing on Friday (June 23) in Warrensburg, to designate Old Drum, the Historical Dog of Missouri. The signing of SB 376 relates to special state designations for Old Drum as the state’s historical dog.
The senate bill also includes designation for Jim the Wonder Dog, to be Missouri’s Wonder Dog. SB 376 is sponsored by Senator Denny Hoskins. Governor Grietens signed the bill at 6:00 Friday evening, beside the statue of Old Drum at the Johnson County Courthouse, in Warrensburg.
Read More: Old Drum to be the Official ‘Historical Dog of Missouri’ | KSIS Link 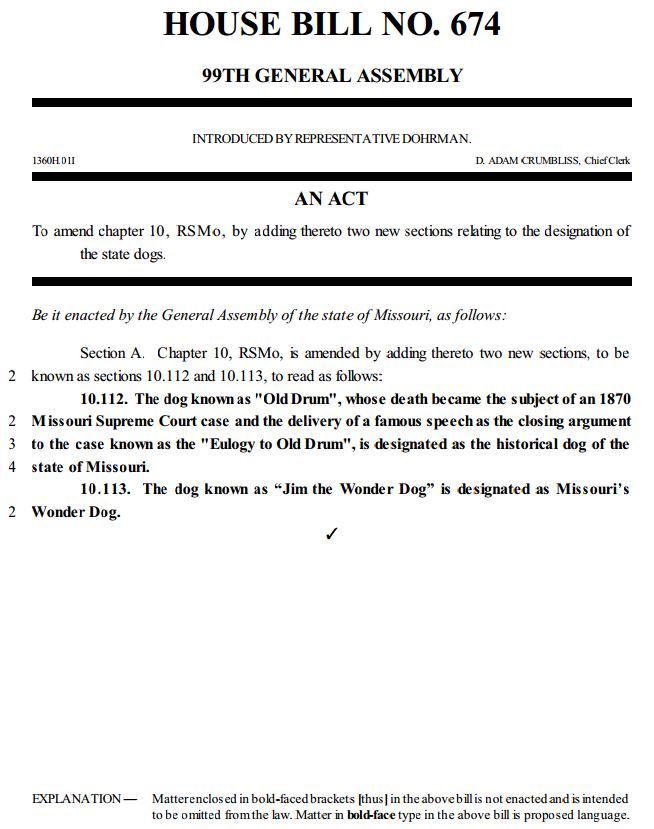 FIRST REGULAR SESSION HOUSE BILL NO. 674
99TH GENERAL ASSEMBLY
INTRODUCED BY REPRESENTATIVE DOHRMAN.
1360H.01I D. ADAM CRUMBLISS, Chief Clerk
AN ACT
To amend chapter 10, RSMo, by adding thereto two new sections relating to the designation of the state dogs. Be it enacted by the General Assembly of the state of Missouri, as follows: Section A. Chapter 10, RSMo, is amended by adding thereto two new sections, to be known as sections 10.112 and 10.113, to read as follows: 10.112. The dog known as "Old Drum", whose death became the subject of an 1870 Missouri Supreme Court case and the delivery of a famous speech as the closing argument to the case known as the "Eulogy to Old Drum", is designated as the historical dog of the state of Missouri. 10.113. The dog known as “Jim the Wonder Dog” is designated as Missouri’s Wonder Dog.

The Case of Old Drum: An Inspiring Story Every Dog Owner Should Know

It's easy to miss--a bronze statue of a black and tan hound on the Johnson County Courthouse lawn in Warrensburg, Mo. But the dog, called Old Drum, has a legacy that will last longer than that statue of metal and stone. The death of Old Drum, you see, inspired a typically loquacious lawyer to deliver one of the finest speeches ever about the loyalty of a hunting dog, and in doing so coined the phrase "man's best friend."


Old Drum was known around the area as an exceptional hound, with a fine nose and a thundering voice. But one night in 1869 when he wandered onto the neighboring property of a livestock farmer Old drum was fatally shot. Old Drum's owner, Charles Burden decided to sue his neighbor, and the case eventually found its way into the Supreme Court. The highly charged and emotional trial would rest on the closing argument of George Vest, who was representing Old Drum's master. Here's what he had to say:


Gentlemen of the jury, the best friend a man has in this world may turn against him and become his enemy. His son or daughter whom he has reared with loving care may prove ungrateful. Those who are nearest and dearest to us--those whom we trust with our happiness and good name--may become traitors in their faith. The money that a man has he may lose. It flies away from him, perhaps when he needs it most. A man's reputation may be sacrificed in a moment of ill-considered action. The people who are prone to fall on their knees to do us honor when success is with us may be the first to throw the stone of malice when failure settles its cloud upon our heads. The one absolute, unselfish friend that man can have in this selfish world--the one that never proves ungrateful or treacherous--is his dog. Gentlemen of the jury, a man's dog stands by him in prosperity and poverty, in health and sickness. He will sleep on the cold ground, where the wintry winds blow, and the snow drives fiercely, if only he can be near his master's side. He will kiss the hand that has no food to offer; he will lick the wounds and sores that come in encounter with the roughness of the world. He guards the sleep of his pauper master as if he were a prince. When all other friends desert, he remains. When riches take wings and reputation falls to pieces, he is as constant in his love as the sun in its journey through the heavens.


If fortune drives the master forth an outcast in the world, friendless and homeless, the faithful dog asks no higher privilege than that of accompanying him to guard against danger, to fight against his enemies. And when the last scene of all comes, and death takes the master in its embrace, and his body is laid away in the cold ground, no matter if all other friends pursue their way, there by his graveside will the noble dog be found, his head between his paws, his eyes sad but open in alert watchfulness, faithful and true even to death.


That, my friends, is one fine piece of oratory. One fine dedication to all dogs that that have come and gone. And it made me think anew of all the reasons that I love my pup. I imagine it did the same to you? 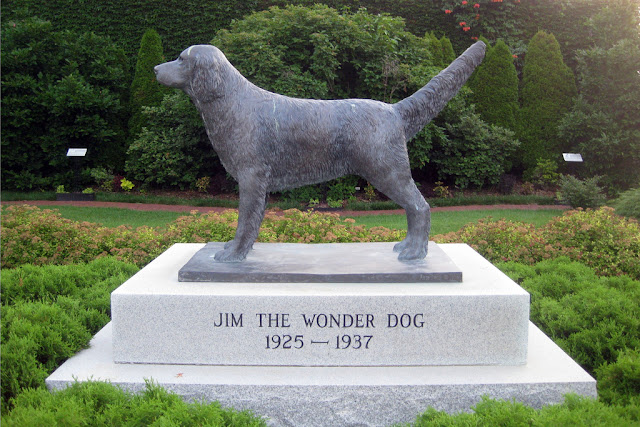 A short "tail" of my life


by Evelyn Counts (who always believed in me)


Jim was a Llewellyn setter born of pure blood champion field stock in Louisiana. Though his litter mates were selling for $25 each, a goodly sum in 1925, he was considered the most unlikely of the litter and came into Sam VanArsdale's hands for less than half that amount. Attempts to train Jim for the field seemed futile as he lay in the shade watching while the trainer worked with the three other dogs. However, when taken to the field that fall for the first time, he immediately went to a covey of quail, came up on perfect point, held steady until the quail was shot, and immediately brought the bird to Mr. VanArsdale on the order to "fetch". He proved to be a marvelous hunting dog, knowing where there were quail, and refusing to hunt where there were none. His master, an avid hunter who traveled from state to state hunting, kept track of birds shot over his beloved dog. He stopped counting at 5,000, a total no other dog ever reached. Outdoor Life Magazine termed him "The Hunting Dog of the Country".


However, Jim was much more than just a champion hunting dog since Mr. VanArsdale found, quite by accident while in the field one day, that his dog could understand what he was saying to him and carried out his commands. It was a hot day, and Mr. VanArsdale said, "Let's go over and rest a bit under that Hickory tree". Although in a woods of numerous kinds of trees, he went to the Hickory. Surprised by this, he asked Jim to go to a Walnut, then a Cedar, a stump, and a tin can, which he did rapidly and perfectly.


This was the start of the amazing things the dog did on command. When told to do so, he could go out on the street and locate a car by make, color, out-of-state, or a license number. From a crowd he could select the "man who sells hardware", and the one who "takes care of sick people", or the "visitor from Kansas City".


He carried out instructions given to him in any foreign language, shorthand, or Morse Code. He was capable of predicting the outcome of future events. He chose the winner of seven Kentucky Derbies, The World Series of baseball and the sex of unborn babies.


Mr. VanArsdale arranged for a demonstration at the University of Missouri with Dr. Durant, head veterinarian. He could find nothing physically abnormal from any other dog. He was tested by a group of college students and passed each command with flying colors.


In 1935 Jim performed at the Kemmerer Hotel in Kemmerer, Wyoming. After his successful performance, an article was written in the Gazette of Kemmerer on Friday, August 30, 1935, telling of this performance and referring to Jim as "The Wonder Dog".


Jim also performed before the Missouri Legislature and at the Missouri State Fair in Sedalia. Newspaper and magazine writers came to witness Jim and were stunned. They wrote of incredulous things they saw and Jim's fame spread across the United States and elsewhere. He was featured in Ripley's Believe It or Not.


He is buried in Marshall's Ridge Park Cemetery with a grave stone and is probably the only animal in a people cemetery. Caretakers say his is the most visited grave there and is seldom without flowers and coins left on it. The site of the Jim The Wonder Dog Garden off the northwest corner of the Square is the place once occupied by the Ruff Hotel where Jim lived with his owner Sam VanArsdale, the hotel manager. This is Marshall's way of commemorating one of it's most famous "citizens".

Thanks to everyone for supporting this and to Courtney Stephens and the Warrensburg Convention and Visitors Bureau for attending the hear in Jefferson City on Feb. 1, 2017. Special thank you to Rep. Dean Dorhman, the bill's sponsor.

By STEVEN SPEARS
Managing Editor  March 1, 2017
(WARRENSBURG, Mo., digitalBURG) — Old Drum is one step closer to being named Missouri’s historical dog.
Senate Bill 376 was passed by the Senate general laws committee Feb. 15 and is now headed to the Senate for approval. After Senate approval, the bill must be approved by the House. If passed, the bill would designate Old Drum the historical dog of the state of Missouri.
Old Drum was a dog whose death became the subject of an 1870 court case at the old Johnson County Courthouse on Main Street in Warrensburg, Missouri, where the plaintiff’s closing argument originated the expression “dog is a man’s best friend.”
Old Drum was shot and killed Oct. 28, 1869, by 12-year-old Samuel Ferguson, according to a Johnson County Historical Society informational brochure. Leonidas Hornsby, Ferguson’s uncle, testified that dogs had killed 100 sheep on his farm that year, and Ferguson shot at a dog on his property – not admitting it was Old Drum.
Attorneys for Charles Burden, Old Drum’s owner, claimed Hornsby vowed to kill the first dog that came on his property, according to the brochure. George Graham Vest, one of Burden’s attorneys and later a U.S. Senator, delivered the closing argument that would come to be known as the “eulogy to a dog.” The speech claimed that Burden lost more than a dog – he lost his best friend, according to the brochure.
The jury found for Burden after hearing Vest’s argument, according to the brochure. Burden was awarded $50 for the loss of his “best friend.” The verdict was upheld by the Missouri Supreme Court, according to the brochure.
State Sen. Denny Hoskins, the bill’s sponsor, said naming Old Drum Missouri’s official historical dog would help with tourism and economic development in the area.
“We have a lot of dog lovers not only across the state but across the United States and across the world,” Hoskins said in a phone conversation. “Making Old Drum the official state historical dog and telling more about the Old Drum story and where the saying, ‘A dog is a man’s best friend’ came from, would definitely help economically here in Missouri.”
Hoskins said he has been working on this bill in some form for the past six years. He said he thinks Old Drum definitely merits consideration.
“There’s a bust of Old Drum in the Missouri state Supreme Court where attorneys rub the bust of Old Drum for good luck before they head in for a court case,” he said. “And I just think the history of Old Drum… it was really about the first time both Confederate and Union attorneys came to work together.”
There is a competing bill in the Missouri House that would designate Old Drum the official historical dog of Missouri while naming the dog known as Jim the Wonder Dog Missouri’s official “Wonder Dog.” House Bill 674, sponsored by Rep. Dean Dohrman of the 51st District, is still in committee.