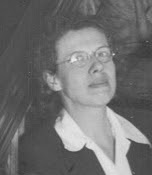 Nancy Farley "Nan" Wood (12 July 1903 – 19 March 2003) was a member of the Manhattan Project and a business owner who designed, developed and manufactured her own line of ionizing radiation detectors. She was a lifelong feminist and proponent of the Women's liberation movement as evidenced by her activities starting with being a founding member of Chicago NOW. During World War II, Wood taught calculus to U.S. Navy sailors in Chicago. Later, during World War II, she was recruited to the Manhattan Project where she designed and developed ionizing radiation detectors with John Alexander Simpson in the instrument division at the University of Chicago Metallurgical Laboratory or Met Lab. In 1949 Wood founded the N. Wood Counter Laboratory.
Life and Times
Wood was born Nancy Lee Farley on a farm in 1903 at La Monte, Pettis County, Missouri and died in 2003 at the home of her son, William in Baroda, Berrien County, Michigan. Wood was the second child of four and the only daughter of Daniel Lee Farley and Minerva Jane Ross. In addition to her three brothers, she also had two half-brothers and a half-sister. In 1928, she married John Curtis Wood and the couple had 6 children, 5 of whom survived to adulthood. Nancy and John Curtis Wood and their daughter Shirley June (who died at the age of two) are buried at Green Ridge Cemetery in Green Ridge, Pettis County, Missouri.

Education
Wood began her education in a one room schoolhouse in Green Ridge, Missouri. The family moved to central Missouri so she could attend college.Wood graduated from the Warrensburg Teacher's College (University of Central Missouri in 1922 and taught high school mathematics and physics. She attended the University of Chicago and in 1927 received an M.A. degree in education.
N. Wood Counter Laboratory
In 1949, Wood founded the N. Wood Counter Laboratory. The company was located atop the Hyde Park Bank building in Chicago.


N. Wood Company
The company was established to develop, manufacture and supply gas-filled gamma radiation detectors and neutron radiation detectors. The customer base was research laboratories and universities engaged in the development of the peaceful utilization of atomic energy. The N. Wood Counter Laboratory company remained in business for over 50 years to supply a range of BF proportional neutron detectors, Geiger-Mueller detectors, proportional gamma counters and gas flow counters. In March 1994, Wood sold the company to her daughter, Marjory Wood Crawford.
In 1957, during the International Geophysical Year, the N. Wood model G-15-34A neutron detectors (Simpson Counters) were utilized to collect data worldwide.

Patent Credits
Chlorine logging system using neutron capture gamma rays. U.S. Patent No. 3,244,882.
Production of chemistry-dependent gamma ray and thermal neutron logs corrected for porosity. U.S. Patent 3,435,217.
Radioactive well logging system having a multiple conductor cable. U.S. Patent 3,439,165.[26]
Method for chlorine logging wherein both chlorine and calcium are logged using a plurality of select narrow windows. U.S. Patent 3,484,609.
Feminism and Woman’s Liberation
Founding member, Chicago NOW, National Organization for Women
Woman of the Year, Chicago NOW, 1977
National secretary, NOW, National Organization for Women
International Chairman, Status of Women, Zonta International
Community Service
Save the Dunes Council, Indiana
Member, Izaak Walton League
Hyde Park business woman Nancy "Nan" Farley Wood broke many barriers for her era.
She received a master's degree in education in the 1920s from the University of Chicago and a decade later, during World War II, she taught a calculus course to U.S. Navy sailors while her husband took care of their five children.
Shortly after, she was recruited to work on the top-secret Manhattan Project. She also founded a business in Hyde Park in the 1940s. In the 1960s, she became one of the first national secretaries for the National Organization for Women.bMrs. Wood, 99, died Wednesday, March 19, in Baroda, Mich., where she had been living with her son, William. The cause of death is unknown, according to the family.
Born on a farm in Green Ridge, Mo., Mrs. Wood attended class in a one-room schoolhouse. Her father noticed his daughter's intelligence and was determined she would have the opportunity to attend college.
Marjory Wood Crawford said her mother was an independent, strong-minded farm girl who would read everything she could. By age 12, she had read the Bible and said she would always be bothered by the way women were treated in the book, her daughter said.
"She was a feminist very early," her daughter said.
When she attended college, her family moved to Warrensburg, MO so she could continue to live at home. She graduated from Warrensburg Teachers College in Missouri in 1922 and went to work as a teacher. She met her future husband at a conference in Colorado.
"A fly flew into her coffee and a young man said, `Let me get another cup of coffee for you,' and that became my father," said her daughter.
Five children and almost two decades later, Mrs. Wood was approached by the FBI to work on the Manhattan Project. There, she helped with the designs of various radiation detectors and built many of them. Her family and friends did not know until after the war that she had been connected to the secret project.
In 1949, she founded the N. Wood Counter Laboratory, so named because she did not want people to know a woman owned it. She ran the Hyde Park business,which supplied radiation-detection instruments to research scientists around the world, until she was 87 years old. Mrs. Wood joined in the women's liberation movement and eventually became the national secretary of NOW.
She picketed United Airlines in 1969 when women were not allowed to fly on executive flights between New York and Chicago. She protested local restaurants that did not allow women in 1970. She was also involved in environmental causes and was a member of the Save the Dunes Council in Indiana.
"She was one of the first feminists and activists, there is no doubt about it," said longtime friend and women's rights crusader, Wanda Brandstetter. "She's probably the most honest human being I ever met, and she cared about people. [She] was capable of almost any kind of intellectual activity going on."
In addition to her son and daughter, Mrs. Wood is survived by two daughters, Elizabeth Wood Trimm and Nancy Wood Ahrens; a son, David; 14 grandchildren; and 15 great-grandchildren.

17 Nov 1930
Sedalia Democrat For Daniel L. Farley
Submitted by Bill Scroggin From newspaper collection, Newspaper Library, State Historical Society of Missouri.
D. L. Farley, aged 75 years , four months and 26 days, died at 8:45 o-clock this morning at the Bothwell Memorial Hospital while being operated on. Mr. Farley was one of Pettis County's best-known farmers, who resided one-half mile south of Green Ridge, where he made his home since 1905. Previous to that time he resided in the La Monte vicinity. Mr Farley was a good man with a legion of friends and was a member of the the Baptist Church at Green Ridge. He was born in Warrensburg, Johnson County, June 21, 1855 and spent his entire life in Missouri. August 6, 1876, he was married to Miss Arizona Akins, who preceded him in death on February 26, 1883. To that union three children survive, they being W B Farley, Sedalia, J. A. Farley of Parshall, Col. And Mrs. Q H Glenn of Peoria, Ill. In 1886 he was again married, his bride then being Miss Mary l. Lee of Beaman, Mo., who preceded him in death also. He was again married in December 1900 his third wife being Miss Minerva Ross and to them four children were born as follows, E. H. Farley, Bayfield, Col. D Farley, Slater, MO; Mrs. J C Wood (Nan Farley Wood), Eldon, MO and E M Farley of the home address and five grandchildren. Three brothers also survive they being J.N. Farley, Basin, Wyo.; G W Farley, Henrietta, MO and J H Farley, Sedalia, MO Funeral services will be held at Green Ridge at 1 o'clock Tuesday afternoon with the Rev. Michaelowsky, pastor of the First Baptist Church, Warsaw officiating. Burial will be in Potter's cemetery north of Clinton City.

Thank you to Vivian Richardson, MA, from the McClure Archives and University Museum at UCM for looking into alumni records to discover Ms. Wood graduated in 1922 from UCM.