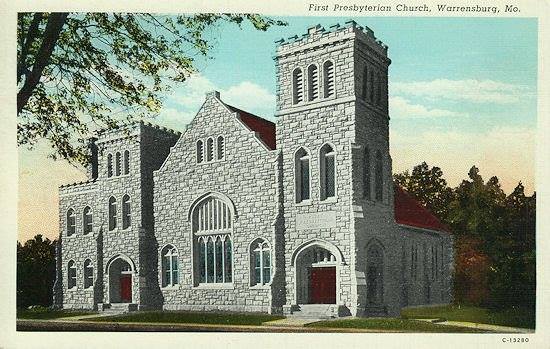 The stone construction pointed arch window and door openings and steeply pitched gable roof with side steeple are all design elements that identify the First Presbyterian Church at 206 North College Street as a Gothic Revival style church. 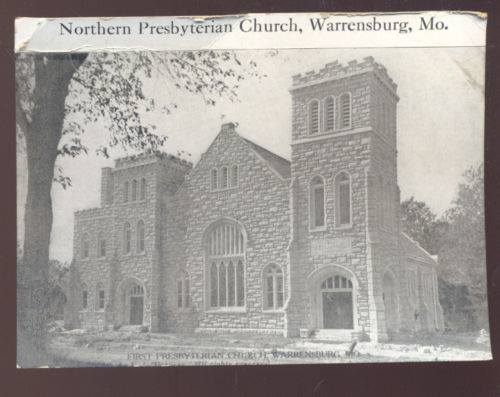 Founded in 1852, Warrensburg’s First Presbyterian Church has a long history of ministry, Christian witness and service.
First Presbyterian’s church building, located at the corner of College and Market, is the congregation’s third structure. The first was erected on Gay Street in Old Town in 1859. 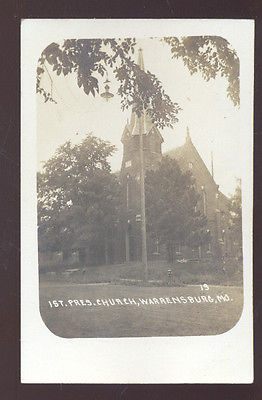 The second, built in 1871 on the current site, was razed in 1909 to make way for the present structure needed for the church’s expanding membership. The first service in the new stone Gothic Revival Church was held on October 9, 1910. In the early 1950s, an education wing and Fellowship Hall were added to the structure. A 2009 project marking the 100th anniversary of the building’s completion refurbished and modernized the historic structure and made it more compatible with twenty-first-century needs. The sanctuary retains its original vaulted wooden ceiling, stained glass windows and curved pews. The Quimby pipe organ built in 2000 is a two-manual instrument of 29 ranks. 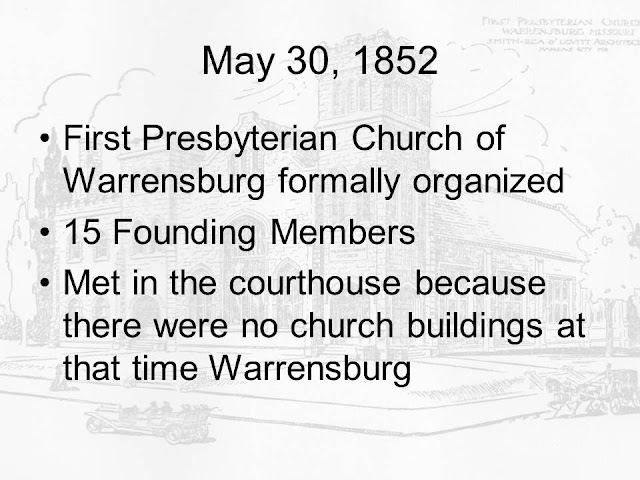 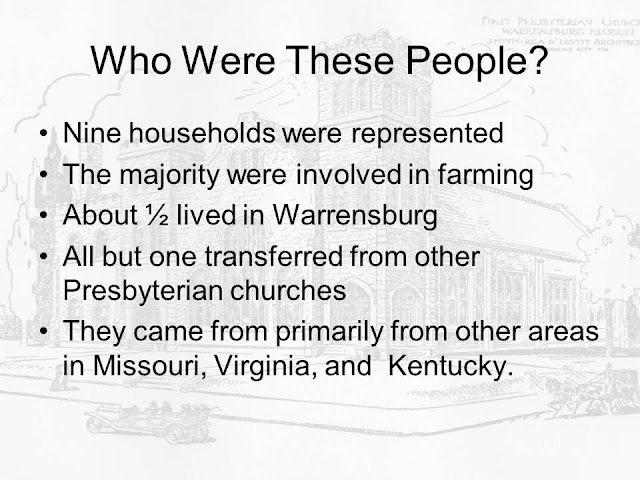 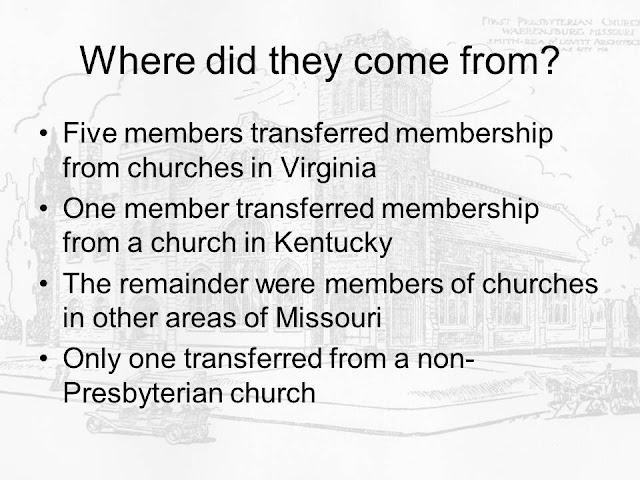 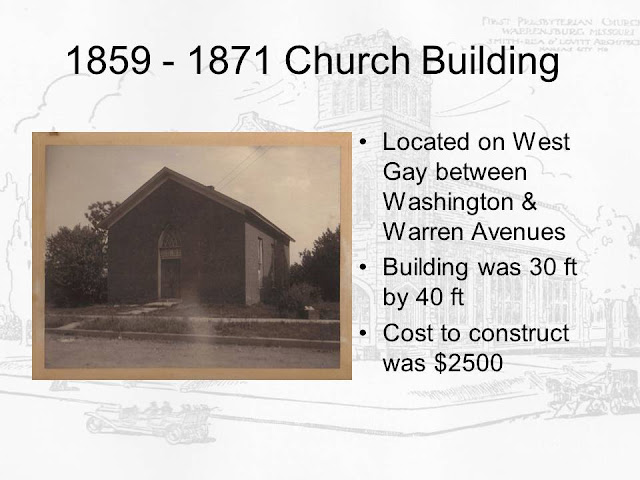 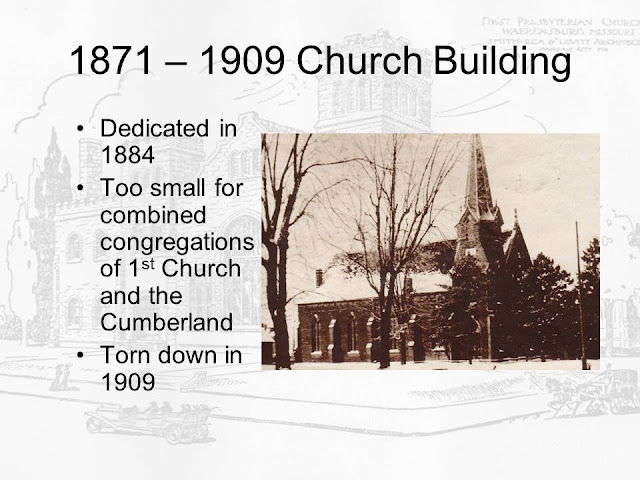 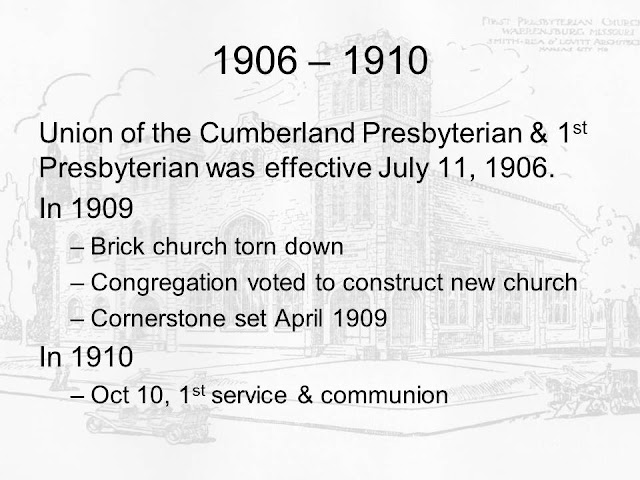 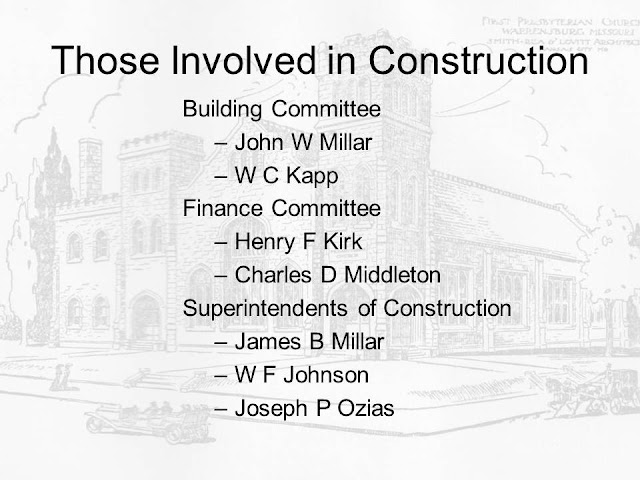 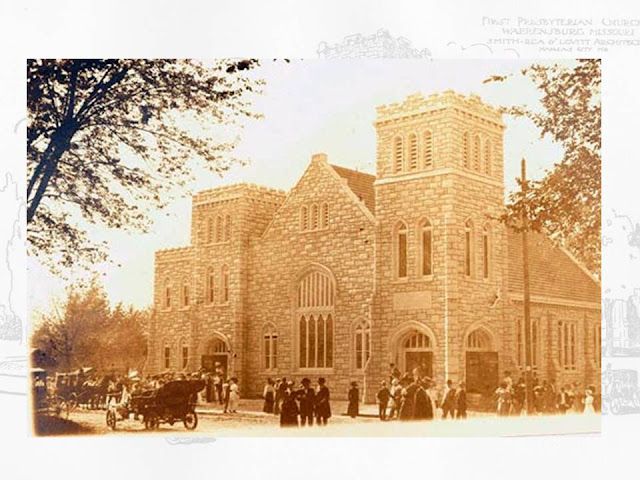 The son of Pastor Dr. Jonathan Hollyman from the First Presbyterian Church grew up to be a well known photographer. Thomas Benton Hollyman Link moved to Warrensburg in 1919 when his father was named pastor at the church. 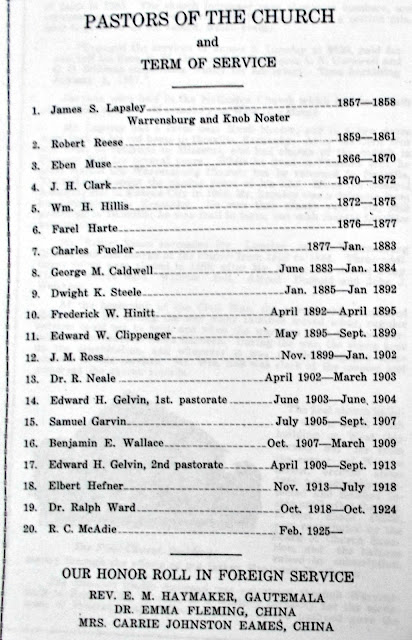 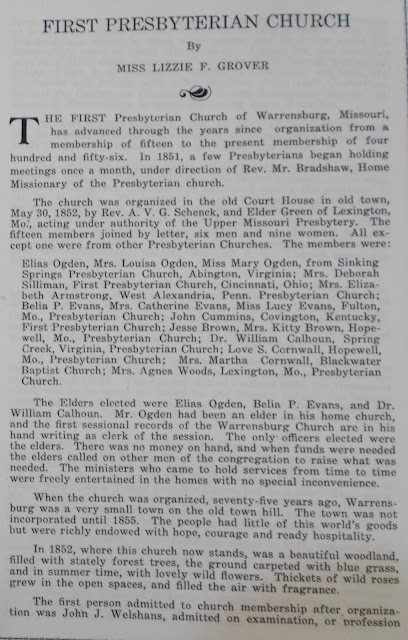 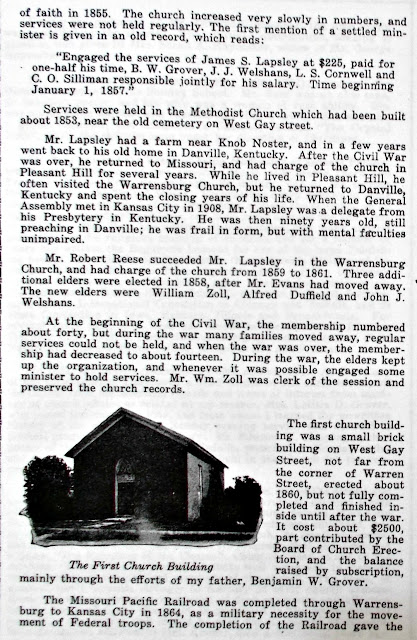 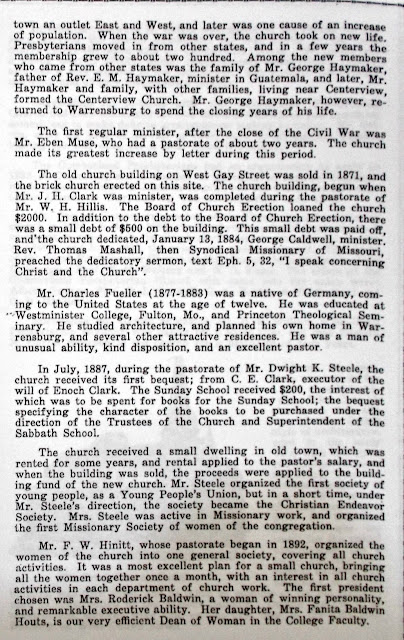 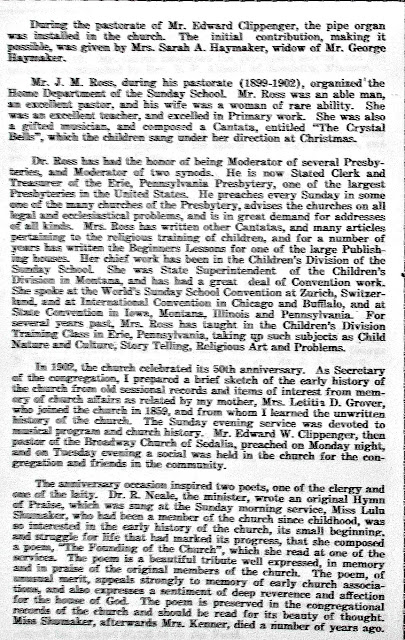 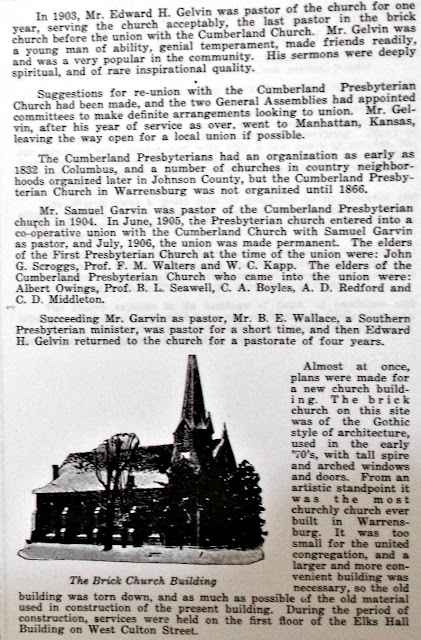 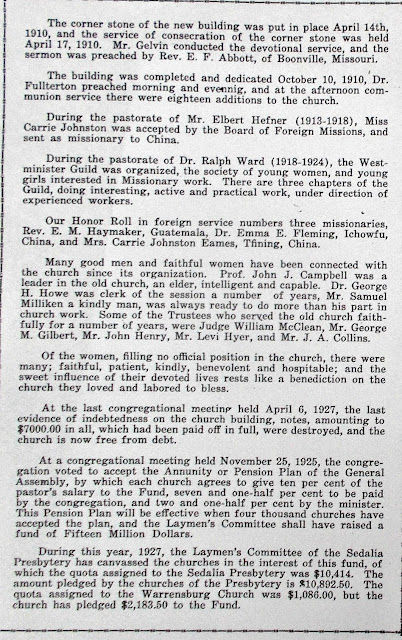 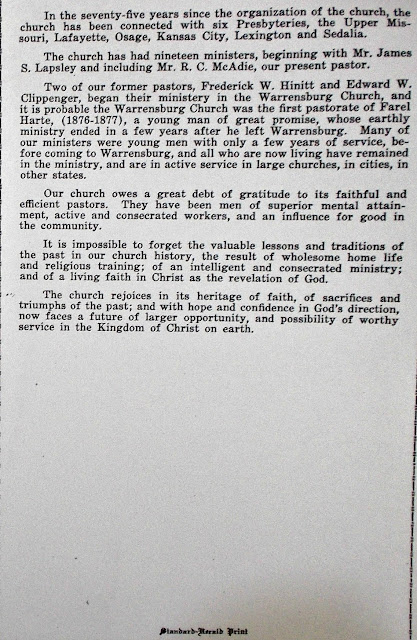 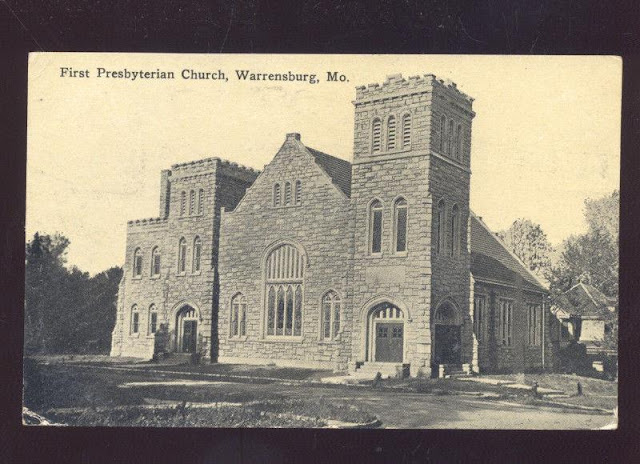 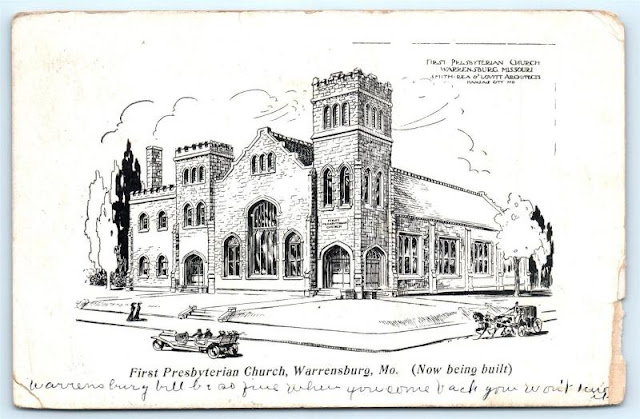 Some members of the Presbyterian Church from an 1895 Book Johnson and Pettis County Portrait and Record.

CAPT. JEHU H. SMITH is the proprietor of a feed stable at Warrensburg, in which business he has been interested in the past ten or twelve years. He has made his home in this city since the termination of his war service, and in 1865 was elected to the position of Mayor, serving as such for two years, and for five years was a member of the City Council. In 1866 he became a member of the first school board organized here, which erected the first public schoolhouse, in spite of strong prejudice against the enterprise. Altogether he has served fifteen j^ears as a School Director and has had the satisfaction of seeing several modern buildings put up for the education of the rising generation.
A native of Monroe County, W. Va., Captain Smith was born April 29, 1832, being the son of
Christopher and Mary (Hanks) Smith. The mother came from the same family as did the mother of Abraham Lincoln, Nancy Hanks, she being her aunt. Christopher Smith was a tobacco manufacturer at Danville, Va. , until he was about forty-five years of age, when he moved to Ohio, where he died two years later. When J. H. Smith was two years old his parents removed to North Carolina and lived in Raleigh about ten years, though during this time the father continued to do business in Danville, Va. His father having died in 1850, our subject was thrown upon his own resources, and the management of his father's farm fell upon his shoulders. He continued to live with his mother until he was married, and it was not until 1859 that he moved to Missouri. He bought one hundred and sixty
acres of land in Harrison County, and cultivated the place until the outbreak of the war. In 1861
he organized a company of home guards, of which he was made Captain. During the winter of
1861-62 he was stationed at Gallatin, Mo., and was instrumental in driving out a regiment of
Confederates. In the following February he was made Adjutant of the regiment, and his company
all re-enlisted, becoming the First Missouri Cavalry, Missouri State Militia. Their headquarters
were at Breckenridge for some time, but in August, 1862, they were engaged in battle with
General Porter at Kirksville. Captain Smith was wounded in the leg during the skirmish near
Lexington, Mo., but otherwise was never injured. In 1863 their headquarters were changed to Warrensburg, and in October of that year, Mr. Smith´was appointed Provost-Marshal by General Schofield. Subsequently, he was Provost-Marshal at Kansas City until the death of Lincoln, when he
was appointed on the staff of General McNeal and took charge of the arsenal at Jefferson City.
He was finally mustered out of the service, August 25, 1865, and rejoined his family, who had
lived during the war in Harrison County, but whom he then brought to Warrensburg, their
permanent home. December 24, 1854, Captain Smith married Margaret J. McKibben, who was born in Columbiana County, Ohio, in July, 1833. To them were born six children, of whom the eldest, Oscar, died at the age of six years, during the war; Sarah, wife of C. S. McCarty, has two children, and is now living in New Mexico; Josephine married W. E. Anderson, by whom she has three children and makes her home in Colorado; Joseph H., whose wife died leaving him two children, is now living with his parents; Laura also resides at home; and Maude died at the age of six years.
In 1866 Captain Smith was elected County Treasurer, and served two years in that capacity,
after which he was made Deputy-Sheriff, and at the end of two years was elected Sheriff and Collector. He had bought land in Johnson County amounting to about four hundred acres, and this
he looked after for two years. When he was a boy he united with the Methodist Episcopal
Church, but is now a member of the First Presbyterian Church of this city. In 1866 he joined Corinthian Lodge No. 26, A. F. & A. M., of Warrensburg, with which he has since been identified.
He also belongs to the Royal Arch Masons, the Knights Templar, Col. Grover Post, G. A. R.,
and is also identified with the Independent Order of Odd Fellows.