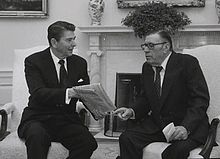 
Born in Ottumwa, Iowa, Williams was one of 13 children in a very poor family. He grew up in the in Leeton, Missouri. He got work as a truck driver in 1935.


After the war, Williams returned to trucking. He was elected business agent of the union's Wichita, Kansas local in 1948. He later was elected president of Joint Council 56 and president of Teamsters Local 41 in Kansas City, Missouri. He married and had two daughters.


In 1955, Williams was elected a trustee of the Central States, Southeast and Southwest Areas Pension Fund, one of the union's largest and most important pension funds. He later testified in federal court that leaders of organized crime paid him $1,500 a month in order to funnel $87.75 million in loans from the pension fund to construction projects run by the mob. During this period, Williams formed a close working relationship with Teamsters president Jimmy Hoffa.


Williams quickly rose to power in the post-Hoffa Teamsters by associating himself with new president Frank Fitzsimmons. In 1967, Williams was appointed spokesman for the union's national surface transportation negotiating committee by Fitzsimmons. In 1971, Williams elected appointed a vice president of the international union. In 1976, Fitzsimmons appointed Williams to be director of the Central Conference of Teamsters, a regional council which controlled union locals in 14 Midwestern states.


In 1977, Williams was forced to resign from the Central States Pension Fund after the United States Department of Labor sued Williams and four others for violating their fiduciary duty.


Fitzsimmons died on May 7, 1981. First vice president George Mock was named interim president. But Mock's age militated against his assuming the presidency at the upcoming membership convention. So on May 15, Mock stepped down and Williams was named interim president by the Teamsters executive board. He won election at the union's convention in early June of that year.
However, Williams came under immediate suspicion for involvement with organized crime, particularly Kansas City Crime Boss Nicholas Civella. On May 11, 1981, testimony before a subcommitee of the United States Senate indicated that Williams was heavily involved with the Mafia. Williams was indicted on May 22.
Teamsters members, however, elected Williams president to fill Fitzsimmons' unexpired five-year term on June 6, 1981.
During his short tenure as president, Williams was forced to reopen the national trucking agreement in September 1981 and accept a two-year wage freeze (which the union ratified in March 1982).
Trial and conviction
After a two-month trial during which extensive wiretapping evidence was heard, Williams and four others were convicted on December 15, 1982 for conspiring to bribe Nevada Senator Howard Cannon to defeat a trucking industry deregulation bill, the Motor Carrier Regulatory Reform and Modernization Act of 1980.
Williams attempted to remain president of the Teamsters, however. He was sentenced to 55 years in prison on March 31, 1983. He offered to testify in various trials of organized crime figures, which federal prosecutors accepted. Williams remained free on bail while he was deposed. But Congress, hearing more and more testimony about the degree of criminal infiltration of the Teamsters, pressed him to step down. Williams eventually resigned on April 14, 1983, and Presser assumed the presidency. A large collection of documents that were produced during Williams tenure as Teamsters president are now under the care of the Special Collections Research Center of The George Washington University, located in the Estelle and Melvin Gelman Library.
His continuing testimony delayed his prison term. Roy Williams finally entered a federal medical prison on August 20, 1985. He continued to testify in a large number of cases.

His successor as Teamsters president, Jackie Presser, was a major source of the information used in Williams' conviction.
Parole and death
In August 1988, Williams was granted parole due to ill health and for having turned state's evidence in federal prosecutions in a number of other criminal cases. He was released from the United States Medical Center for Federal Prisoners in Springfield, Missouri, in September 1988. His parole was conditioned on his continuing cooperation with federal authorities.


However, Williams only testified a few more times in the seven months of life left to him. He died on April 28, 1989, at his farm in Leeton, Missouri, from cardiac disease and emphysema. 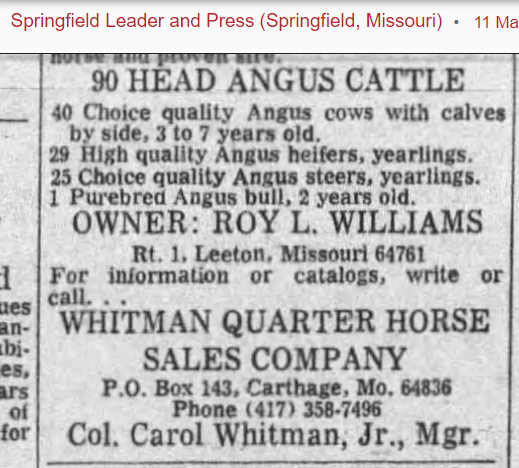 The Old Roy Williams Farm was located on CC highway in Henry County, MO. Two miles South of Leeton on 2 highway to CC. Right on CC and travel about 1 1/2 miles. First home/barn place on the right.
Roy also had a place before this, just north of Leeton, not far from Harmony church. He had a horse show ring.
Kanas City Mob Story


Roy Lee Williams, who rose from trucker to international Teamsters president, died at his farm home (Leeton, Missouri) Friday, seven months after his release from a prison term for conspiring to bribe a U.S. senator. He was 74.


Williams had been in poor health for years with emphysema and an enlarged heart and died just hours after a doctor was called to the house.Williams, a protege of former Teamster President Jimmy Hoffa, served as president from 1981-83. He was forced to resign the presidency to delay the start of a 10-year sentence following his conviction with four other men for attempting to bribe then-Sen. Howard Cannon of Nevada to influence trucking deregulation.


Danny Johnson, who now holds positions once held by Williams as president of Teamsters Joint Council 56 and Local 41 in Kansas City, praised his former boss.


"Roy Williams was the best thing to happen to the Teamsters outside of Jimmy Hoffa," Johnson said Friday. "There's been a lot of bad publicity about him, and maybe some of it rightly so. But he went to jail for trying to keep out deregulation, which has eliminated over 160,000 Teamster jobs."


"You couldn't ask for a better man, as a Teamster, as someone that cared about his members, and as a leader of that movement," Johnson said.


Williams testified at a casino skimming trial in Kansas City that he had been on the payroll of the mob and under the domination of Nick Civella, the late Kansas City crime boss. He said he received $1,500 a month from late 1974, when he was a local Teamster president, until mid-1981 when he was elected international vice president.


Williams' testimony in that trial and other racketeering cases was designed to get his sentence - originally set at 55 years - reduced and to get him out of prison early. He continued to cooperate with the government after his release last September from the U.S. Medical Center for Federal Prisoners in Springfield, Mo.


Williams always maintained his innocence and said he was set up in the bribery case. He also said that he cooperated with the mob after the lives of his family members had been threatened by Civella's henchmen.


"I am still just an old truck driver at heart," he said in a January interview. "It's over now, and I am glad of it."


The Devil and Roy Williams


Early in his Teamster career, this former war hero made a deal with Mafia bosses that launched him upward through the ranks all the way to the union presidency. But then came pay-up time


As President of the nation's largest union, the 1.7-million member International Brotherhood of Teamsters, Roy Lee Williams seemed untouchable. He ruled supreme in the union's palatial marble headquarters at the foot of Capitol Hill, and in I98I he became the first labor leader to be invited to the White House to consult with President Reagan.


But on December 3, 1985, Williams began a ten-year sentence in a federal prison in Springfield, Mo. At age 70, stricken with emphysema and dependent on a wheelchair, he now faces the prospect of ending his days behind bars, a fitting finale to a deadly bargain he made with the Mafia devil more than 30 years ago.


Precisely when Williams sold his soul even he doesn't know. "I got myself in a web before I really knewwhat was going on," he says.


"What Nick Wants." Williams began driving a truck in 1935 at age 20. Although husky and hot-tempered, he was, a fellow Teamster recalls, "really good-hearted." In World War II, he was a field artillery sergeant who fought across Europe. He single-handedly captured 41 Germans in a church by bluffing them into thinking he had a whole platoon behind him.


Coming home with a chest full of medals, including the Silver Star, he returned to his truck-driving job in Kansas City and rose rapidly in the Teamsters. He had two powerful mentors: Floyd Hayes, longtime ruler of Kansas City's Local 41, and a tough Detroiter named Jimmy Hoffa, then the rising boss of the Teamsters' multi-state Midwest conference. 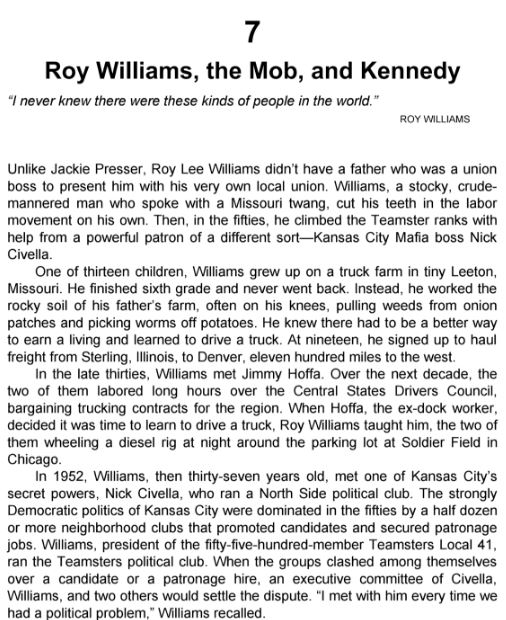 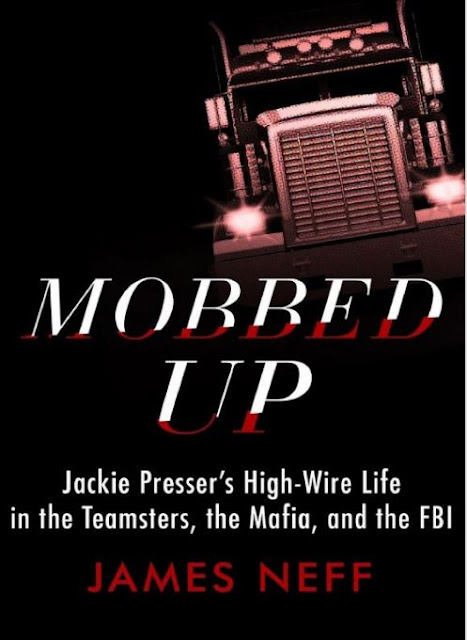