The first mention of the land that later became Shepard Park was an account of the hanging of John W. Daniel in 1878 for the murder of Jesse Miller. According to a reporter for the State Journal (Jefferson City), "The scaffold[is] a rudely constructed frame structure, on the old plan, which stands about half a mile due north of Warrensburg in a ravine surrounded on every hand by the rising ground covered with stunted growth of blackjack bushes.

The gallows stands in a secluded spot so that one cannot see the horrid structure until he approaches within some fifty or a hundred yards of the scaffold of death. This was about half-past nine in the morning, yet the road leading to the scaffold, as well as the ground around the structure, was lined with curiosity seekers... 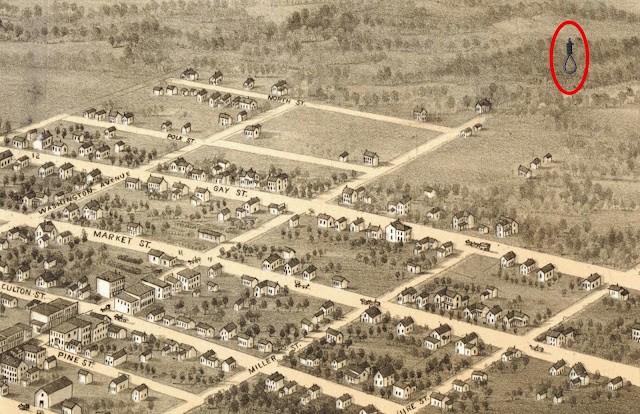 The street labeled "Miller" on the above map is known as College Avenue today. For the whole description of this fascinating event see A Hanging in Shepard Park Link

The Park
Time went by; the city grew, and people's taste in entertainment changed. By 1931, the city council decided Warrensburg needed a park. Charles A. Shepard, owner of Shepard's Dry Goods decided to donate the land. He explained, "When I heard of the council's efforts to buy the park, I began to think that it would make a fine gift to the city and a sort of memorial to my family. I will purchase the park and present it to the city of Warrensburg." 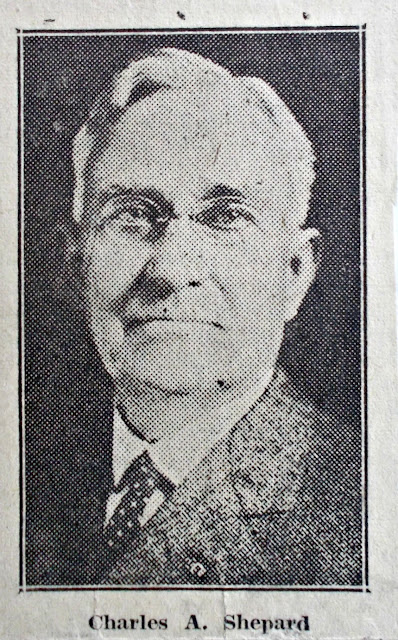 The wading pool was dedicated on June 1934.  The committee in charge of the event was comprised of Edward Beatty and Mrs. W.C. Morris. The dedication was brief and impressive - dedicating the wading pool to "the youth of Warrensburg." Director Don Essig and his musicians furnished "an entertaining program of numbers." The dedication was led by J.C. Hollyman, pastor of the Presbyterian Church and Park Board member. He was quoted, "It is hard to visualize this spot as it was four years ago - a cesspool, and in reality a frog pool inhabited by real frogs.  It is a beautiful park we are enjoying at this time."  Eighty-six children played in the new pool between 3:30 and 6:00 pm. 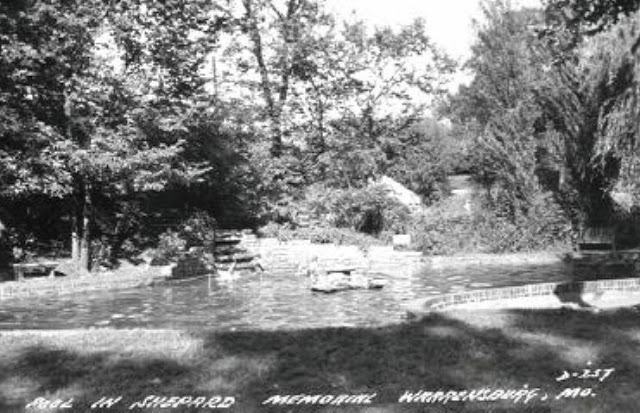 If you peek through the trees, you can just make out College Street. Below is the same place today. 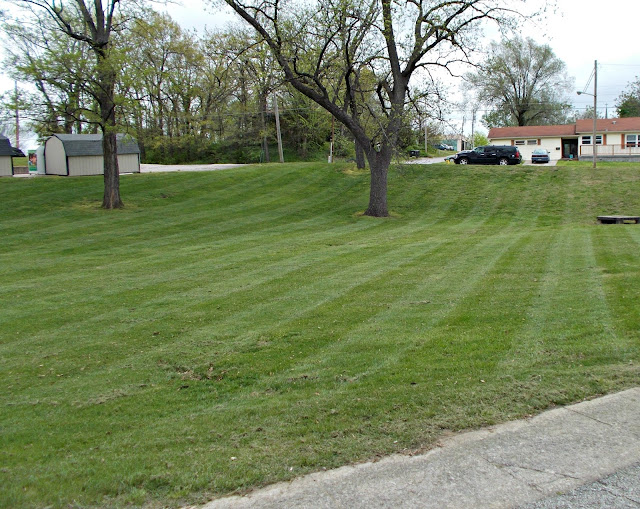 Looking towards College Street, you can see the Big Brothers/Sisters donation bins at the left. A small concrete drain is visible on the far right to keep the area from turning back into a frog pond. As Buddy Baker so poetically puts it, "The pool was right there - by the crappers." (crappers on left not pictured.)

According to Buddy Baker, who was nine when it opened, "One end was knee-high and the other was chest high. The pool was at the east end of the park almost to College Street. It was free to all white children There was no need for a rule to keep black children out; they knew their place."
But 1934 was one of the worst years of the Great Depression and the city soon decided that it couldn't afford to operate the pool. According to a Daily Star-Journal article dated June 19, 1934 (the same month it opened.) "The youngsters of Warrensburg were dealt the worst blow yet in the announcement that the wading pool will not be filled again this year, at least as far as the Park Board is concerned."
Wallace Crossley, State Relief director, was quoted, "I am indeed sorry to learn that the wading pool in Shepard Memorial Park is not to be supplied with water. It was a desirable CWA project and after Warrensburg has received the benefits of thousands of dollars expended here by the government, it seems too bad that the city cannot maintain the pool, which means so much to the happiness of the children during such weather as this..."
An unnamed businessman called the Daily Star-Journal and offered to start a fund for the pool water. He offered to begin the fund with $3.00.
A DSJ article dated July 6, 1934 reported that, "...Arrangements were completed late Tuesday evening for continuing the pool and orders were issued for turning the water on. Mayor L.F. Hutchens donated one half the amount required for maintenance for August and September.

THE OLD STONES - From Frank Morches Brewery on West Pine Street that was reportedly burned to the ground by Carrie A. Nation 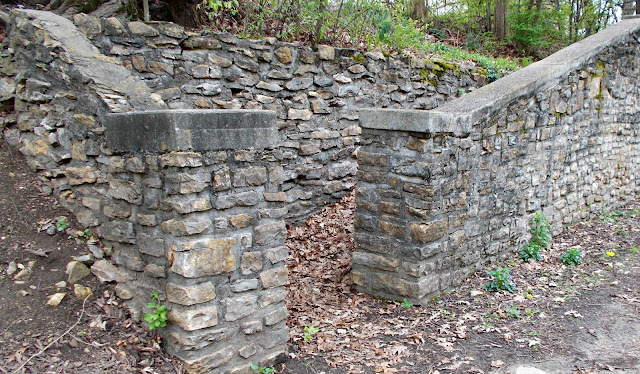 Retaining wall on the south side of the park


Notice that in spite of the city's attempts to pay for the park through donations, Wallace Crossley described the pool as a CWA project on which the government had spent thousands of dollars.
Buddy Baker has similar memories, "The whole park was a big project to keep the destitute busy. My dad was in the WPA. He helped build the retaining wall on the south side of the park.
"The steps behind the retaining wall never led to anywhere. It was just something to do so men could make a dollar a day and buy a little bread for their families. (editor note: the steps do actually go up to five lots known as Scarborough Hill. Five lots that face Holden street. The land behind the beautiful retaining wall is part of Shepard.
"They bought the stones from around here (local quarries), so that was more work for somebody." 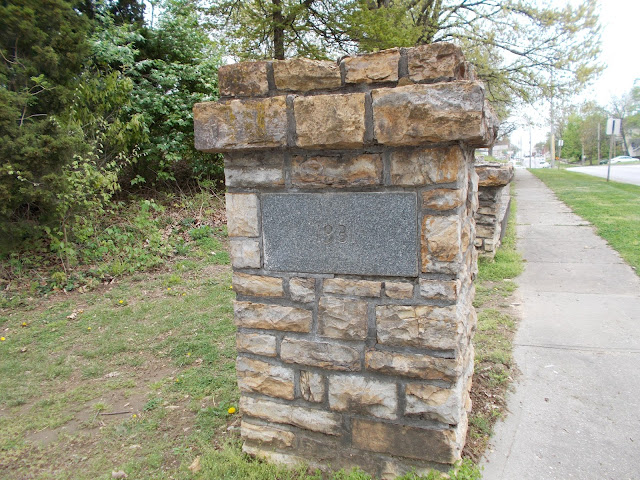 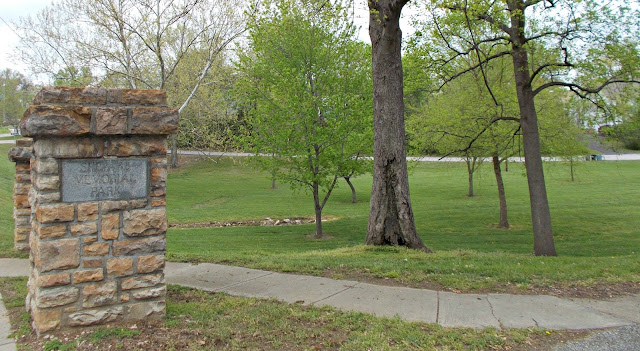 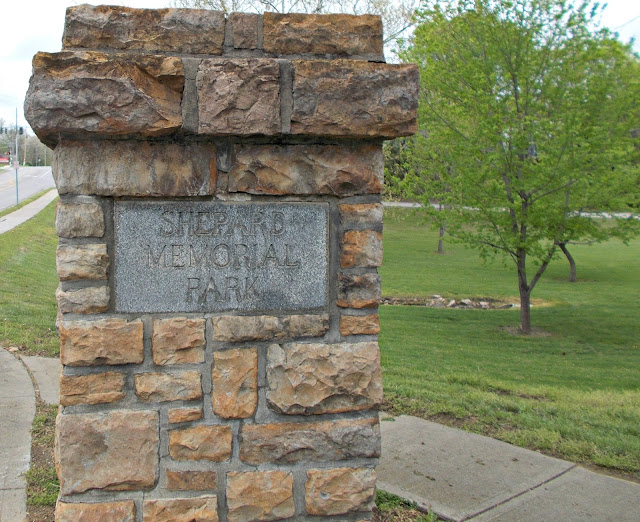 Stone pillars at the entrance of the park were also made from local stone quarried in 1931.
According to a Daily Star-Journal article, there was once a retaining wall to keep College Avenue from collapsing onto the park. These stones were taken from an old brewery that closed in 1918. 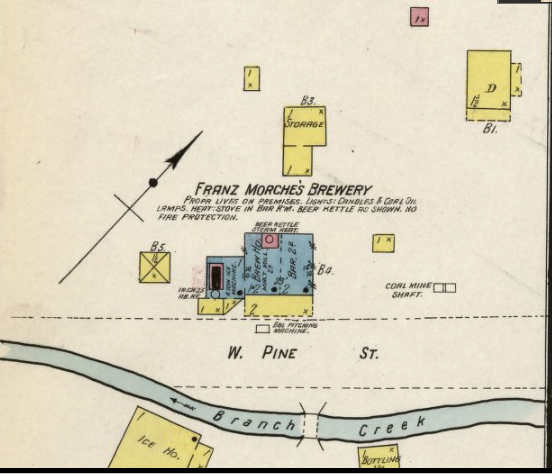 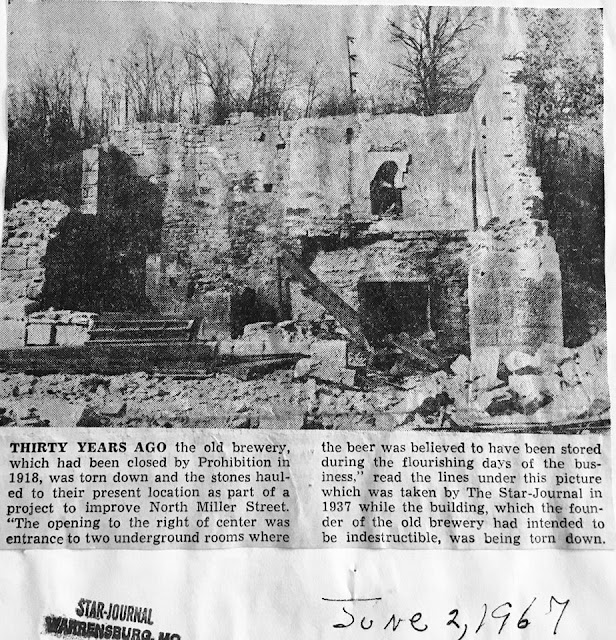 That wall has been covered with dirt and turned into a gentle grassy slope, but the stones are still under there.

Here's some additional information from an interview with David Curtis (former Parks and Recreation director.)
The Barnett House. 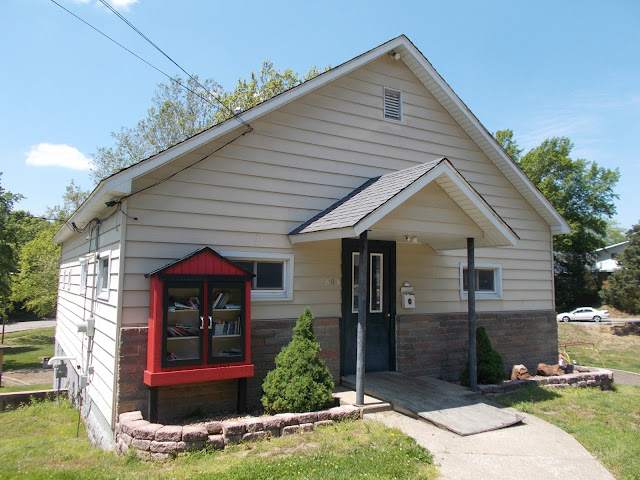 The land for the Barnett House was purchased in the 1960s from some people named Barnett. The park board didn't have the money to buy it. Chester Cassingham was a park board member and he just bought it. The park board paid him back over 10 years without interest.
The 4th of July Massacre.
In the early 1980s, a micro-burst hit Shepard Park and took out a lot of really big trees. That whole area was really heavily shaded. The big sycamore is a survivor.

I know the wading pool was open past 1945. I was born Dec. 24, 43 and distinctly remember my older sister taking me to wade in the pool. I was big enough to wade in the "shallow" part and also in the 'deeper' part up next to the waterfall. We lived at 700 N. Holden and walked to the pool from our house. The pool may have been discontinued in 1946 or '47, but my memories are too distinct for me to be any younger than 3 or 4.