Peggy Nuckles...thank you for the story!
Biographical Sketch of John W. Heuerman, Johnson County, Missouri, Warrensburg.
From "History of Johnson County, Missouri," by Ewing Cockrell, J. W.
Heuerman, the capable and genteel proprietor of the Fourth Ward Grocery of Warrensburg, Missouri is a native of Pettis County, Missouri.  He was born September 27, 1874, son of Fred C. and Carrie (Seibe) Heuerman. J. W. Heuerman received his education in the common schools of Sedalia.  He has made his way in the world since he was thirteen years of age, working as a lad as messenger boy for the telegraph company in Sedalia and later as clerk in McCartys shoe store and in the employ of the Kelk's Carriage Works. At the age of twenty-three years, Mr. Heuerman went to Joplin, Missouri, where he conducted a cafe for the Anheuser Busch people for one year.
He then returned to Sedalia and worked in the employ of the telegraph department of the Union Pacific Railway Company.  In 1898, J. W. Heuerman and Cora Young, of Sedalia, Missouri, were united in marriage. For many years, Mr. Heuerman was employed by the "Katy" Railway Company and by the Queen City Telephone Company.
He was manager of the Bell Telephone Company at Warrensburg for ten years, when he resigned his position to engage in the grocery business.  In March, 1916, he purchased the Fourth Ward Grocery from H. J. Lyon and he now conducts this store in Warrensburg, having a nice, steady, profitable trade, to which he gives his most careful, personal attention.  Mr. Heuerman carries a fine, clean stock of groceries, sufficient for the needs of his patronage.
To J. W. and Cora Heuerman have been born two children: Dorothy and John W., Jr.  Mr. and Mrs. Heuerman reside at 407 Goodwin street in Warrensburg. They are highly esteemed and respected in this community, where Mr. Heuerman has established an excellent reputation, in his quiet, unassuming way, being well known among his business associates as an honorable, upright, conscientious man.
Historical Publishing Company, Topeka, Cleveland, 1918.
One year after this description was published, a young couple named Mr. and Mrs. Nalmer Johnson purchased the Heuerman Grocery at 404 South Mulberry Street, July 1, 1919 when they moved to Warrensburg from Chetek, Wisconsin. At that time the 4th Ward Grocery was a small frame building and in 1920 the present building was constructed on adjacent property.  The store became affiliated with the A. G. group in 1932, six years after the group's incorporation.
Mr. Johnson was an early member of this group.
The Johnson's had a daughter, Hazel, who married Frank Ball.  According to my resident historian, Buddy Baker, they operated Ball's Dinette in downtown Warrensburg. 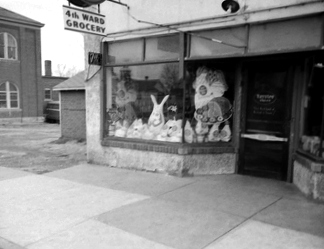 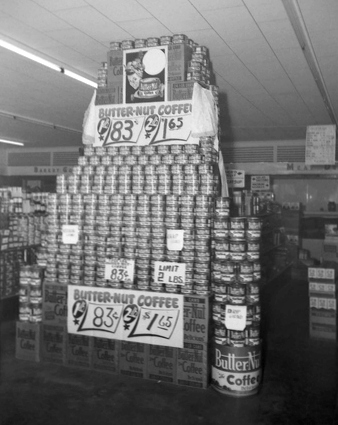 The process of turning negatives into positives using free online software often lowers the quality of the picture.  In the case of the above picture, the signage on the negative is sharper and easier to read. 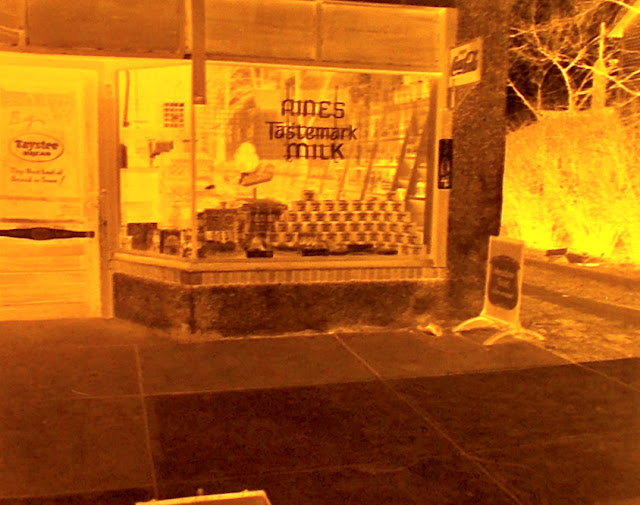 Donna June Ball Wilson, 79, Warrensburg, died Monday, Oct. 18, 2004 at the Country Club Care Center in Warrensburg.
Donna was born Wednesday, July 19, 1925 in Warrensburg, the daughter of Frank Ball and Hazel Johnson Ball.  She graduated from Warrensburg High School in 1942 and had attended St. Mary's University in Levenworth, KS.
On Dec. 19, 1942, she married Wallace Dean Wilson.  He survives at their home.  They lived for a short time in San Antonio, TX before returning to Warrensburg.  Donna and Dean owned and operated Fourth Ward Grocery from 1953 until their retirement in 1975.  She was a member of the Community of Christ Church in Warrensburg.
Funeral services were held at 2 p.m. Thursday, Oct. 21, at Williams Funeral Chapel in Warrensburg. Elder Floyd Hursh officiated. Burial followed in Sunset Hill Cemetery.
Dean Wilson died in 2007: 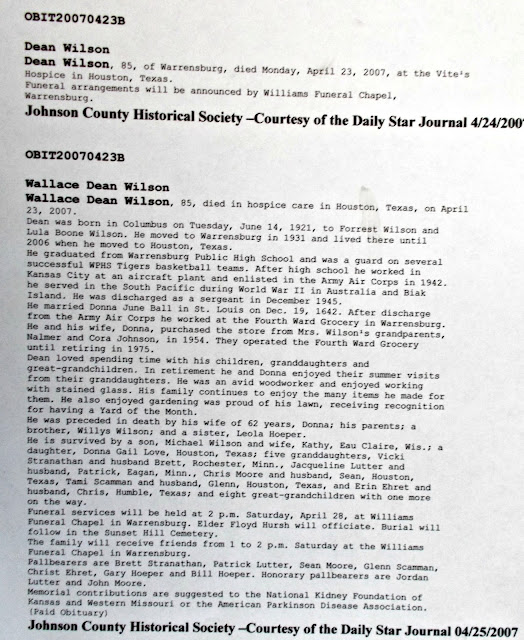 Wallace Dean Wilson, 85, died in hospice care in Houston, Texas, on April 23, 2007.
Dean was born in Columbus on Tuesday, June 14, 1921, to Forrest Wilson and Lula Boone Wilson. He moved to Warrensburg in 1931 and lived there until 2006 when he moved to Houston, Tx.
He graduated from Warrensburg High School and was a guard on several successful WHS Tigers basketball teams. After high school, he worked in Kansas City at an aircraft plant and enlisted in the Army Air Corps in 1942. He served in the South Pacific during W.W. II in Ausralia and Blak Island. He was discharged as a sergeant in December 1945.
He married Donna June Ball in St. Louis on December 19, 1942. After discharge, he and his wife Donna purchased the store from Mrs. Wilson's grandparents, Nalmer and Cora Johnson. in 1954. They operated the store until retiring in 1975.
Dean loved spending time with his children, granddaughters and great-grandchildren. In retirement Dean and Donna enjoyed their summer visits from their granddaughters. He was an avid woodworker and enjoyed working with stained glass. His family continues to enjoy the many items he made for them. He also enjoyed gardening, was proud of his lawn, receiving recognition for having a Yard of the Month.
He was preceded in death by his wife of 62 years, Donna; his parents, a brother, Willys Wilson, and a sister, Leola Hooper. He is survived by a son, Michael Wilson and wife, Kathy, Eau Claire, Wis,; a daughter, Donna Gail Love, Houson Texas, five granddaughters and eight great-grandchildren. Funeral services were held at 2 p.m. Saturday, April 28, at Williams Funeral Chapel in Warrensburg. Elder Floyd Hursh officiated. Burial was in the Sunset Hill Cemetery.
Additional Information about the Heurmann Family
Fred C. Heuerman was born in 1838 in Germany and when a youth, fourteen years of age, emigrated from his native land to America in 1852. He located in St. Louis, Missouri and from that city moved to Sedalia at a time long before the railroad had been built to that point. For a few years, he lived at Colecamp, Missouri and from there returned to Sedalia. Later, he went to Los Angeles, California, where he remained a short time and then came back to Missouri and is now residing in St. Louis. Fred C. Heuerman learned bookkeeping in Germany and he has followed his profession in this country. He enlisted in the Civil War and served in the Union army three years. Mr. Heuerman joined the service at Sedalia, Missouri. Carrie (Seibe) Heuerman is the daughter of a respected pioneer of Sedalia, who was associated in business with John W. Houx, owning a hardware store in Sedalia. To Fred C. and Carrie (Seibe) Heuerman have been born the following children: John W., the subject of this review; Fred C., Jr., St. Louis, Missouri; Leo, St. Louis, Missouri; Edward, deceased; Harry, Los Angeles, California; A. M., Indianapolis, Indiana; and Carrie, who resides in Los Angeles, California.