The Confederates' Last Attempt
by Bruce Nichols
As the winter continued into 1864, it gave no hint of the violence that was to begin in the spring. While Quantrill's band was wintering down south, there was little guerrilla activity in the county, although many bushwhackers remained hidden in wooded recesses. A letter written during this winter by eighty-year-old Mrs. Deborah Silliman, living near Warrensburg, commented on county conditions. She reported that many runaway slaves had made their home near the Union post at Warrensburg, the quartering of troops in private buildings, the employment of her son Charles to defend Captain Andrew Jackson of the First Regiment in court-martial, and the burning by vandals of a house next to hers. Besides vividly describing her own troubles, Mrs. Silliman revealed that many families had fled the county for safety when their men went off to war. Her letter tells of eight such refugees murdered on the road fourteen miles east of Warrensburg a few weeks before. This letter reveals the lawlessness prevalent in Johnson County even so late in the war. Lizzie E. Brannock, a resident of the Chapel Hill in northwest Johnson County, wrote a revealing letter about life in that southern neighborhood on January 13. She told of the loss of her house a year earlier during Major Thomas Herrick's "red leg" raid there, the frequent plundering of her possessions by outlaws and the imprisonment of her husband and brother in the Gratiot Street prison. 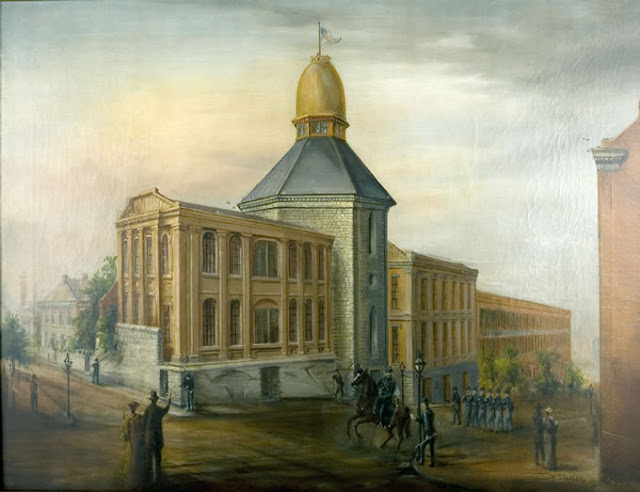 © 2011 The Missouri History Museum. All rights reserved.
The building that was to become Gratiot Street Prison was a large brick structure with two wings. The northern wing (along Eighth Street) had been the medical college.
On January 8, Colonel James H. Ford's Second Colorado Cavalry was introduced into the region to replace the troublesome Kansas "jayhawker" troops, previously used by the Union command to guard the Missouri-Kansas border. These tough frontiersmen had no private scores to settle in Missouri and were to perform gallant service fighting guerrillas in Johnson and adjoining counties in 1864. Colonel McFerran ordered Company G of the First Cavalry to Columbus in northwest Johnson County from Lexington on January 13 after citizens of the latter town complained about the conduct of its officers and enlisted men. This episode clearly contrasts the fresh Colorado troops with the ill-mannered militiamen. On January 14, the leadership of the First Regiment ordered its men to show more respect for private property of civilians. Perhaps the Union command was at last beginning to control its unruly troops. Violence gradually returned to the county throughout February and March. The first skirmish of 1864 took place on February 22 when Lieutenant Walter B. Hamilton's squad of the Fourth Missouri State Militia Cavalry attacked twenty guerrillas of a Captain Blunt's band near Blackwater river in the north. The bushwhackers escaped after Hamilton and one of the guerrillas were wounded. The next day Captain Milton Burris and nineteen men of the First Regiment waylaid the same rebel band, mortally wounding two of them before the rest scattered into the Sni-A-Bar hills. A Kansas City advertisement on February 28, 1864 called for five hundred men to work on the railroad being constructed between Warrensburg and Holden and offered the inducements that the "country is healthy, water good and wages paid monthly in cash." The notice failed to mention what, if any, protection from guerrillas was available; but here was a sign that commerce was reviving in anticipation of an end to bloodshed. The peaceful winter of 1863-1864 ended on a note of violence on March 10 when the district commander issued a general order calling for the formation of civilian home guards for patrol and guard duty. The return of good weather in April prompted local guerrillas to stir from their winter hideouts and Quantrill and his men were back for another fighting season after a winter in the south. The season began abruptly on April 28 with the defeat of a Union party in the northwest corner of the county. Earlier that day Major Jesse L. Pritchard, leading forty-eight men of the Second Colorado, found traces of eighty to one hundred guerrillas heading north (probably from a winter in the South like Quantrill) near Rose Hill in the southwestern corner and began to track them. The Union force followed the trail north past Holden and then to Chapel Hill where Pritchard learned he was too late to prevent disaster. The guerrillas had stopped earlier at a house fifteen miles northwest of Warrensburg on the Chapel Hill road when Lieutenant James E. Couch of the First Regiment and his small party rode up. According to Samuel McLaren, a civilian survivor traveling with Couch's party, the guerrillas were wearing Federal uniforms and identified themselves as Kansas troops.
When Couch's group got close enough, the "Kansans" opened fire, killing Couch and two of his men instantly and felling another who feigned death and lived. The civilians accompanying the Union men were spared harm by a man who boasted he was Quantrill. This small disaster shocked Johnson County and the surrounding area Also in late April, a soldier identified only as Riley, convicted of murdering an Irishman in front of the poor man's family, was publicly executed in Warrensburg —a hopeful, yet gruesome, sign for a return of law and order. May brought more frenzied activity than actual combat. After Quantrill's May 20 attack on Lamar, Missouri, many miles to the south, all Union posts feared his next move. Johnson Countians' fears that Quantrill might come their way were justified on May 22 when guerrillas attacked a small party of First Regiment militiamen under Sergeant Solathel Stone four miles northeast of Chilhowee. Reverend Richard M. King of Captain William H. Thompson's citizen guards accompanying Stone was killed, and the rest were captured except one man who escaped. As Quantrill's gang hurriedly crossed western Johnson County, they upset Federal communications by destroying telegraph lines and capturing a pouch full of dispatches. The bushwhackers disappeared into the Sni-A-Bar hills before any of the pursuing Union troops could get close. During the excitement of May, construction of the "Pacific Railroad" was completed to Knob Noster and the Ninth Minnesota Infantry began a tour of duty in the area to guard the new tracks. On June 5, a foot patrol led by Lieutenant Daniel Shumate of the First Cavalry tired on twelve bushwhackers leading pack horses near the Blackwater but did not hit any of them. Two days later the same patrol fired on a man accompanied by two women in the same area, but he escaped leaving a Federal overcoat and blanket.