The first locomotive west of the Mississippi river was operated on the Pacific railroad at St. Louis late in 1852. Three years later the Pacific railroad had almost reached Jefferson City. In 1861, when the Civil War broke out, it was built as far west as Sedalia. The first railroad to reach the western boundary of the state was the Hannibal & St. Joseph which was completed to St. Joseph in 1859. However, the Pacific railroad was the first road that was in operation in the state, because as it was built westward from St. Louis it was put in operation as fast as it was completed and the terminal of an actively operated railroad followed the construction gang, as it were, across the state to Kansas City.
The state Legislature located the Pacific railroad through Johnson county in 1852, and shortly afterward the construction of this line was started westward from St. Louis. It was built as far west as Warrensburg in 1864. For about one year Warrensburg was the end of the division and also the terminus for about a year. This being the nearest railroad connection it was the shipping point over a wide scope of country during that time. Six or eight cars of merchandise per day were received here and twenty or more freight teams could frequently be seen hauling freight from the Warrensburg station to trading points farther west and south, including Clinton, Butler, Harrisonville, Nevada, Fort Scott, and other points. 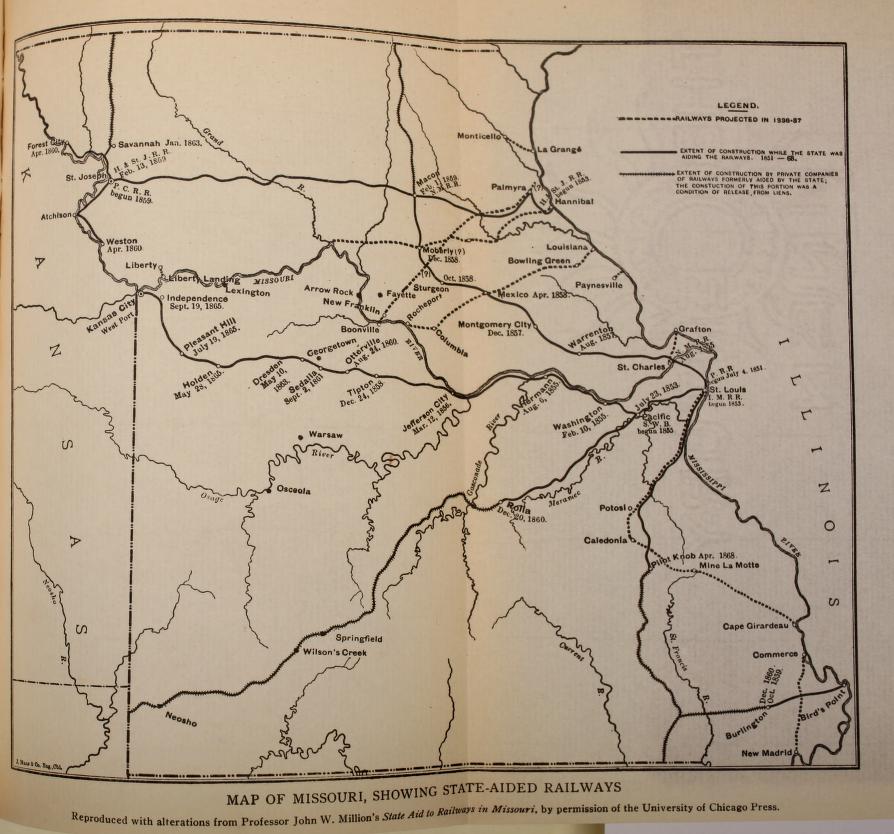 In 1865 the railroad was extended on west through Centerview, Holden and Kingsville and was completed to Kansas City, Missouri, in the fall of that year. Thus the Pacific railroad was the first railroad to be completed in Johnson county. Like all other railroad projects in the early days in the West, the question as to the location of this road aroused fierce opposition between the towns along different proposed routes. The question of the location of this road began to agitate the people as early as 1850. There was a fierce struggle which developed much animosity and bitterness. The fight was carried to the state Legislature to decide whether the road should be located where it now is, which was called the inland route or through the river counties north of the present route, which was called the river route.
Col. B. W. Grover, of Warrensburg, who at the time was a member of the state senate, is perhaps entitled to more credit than any other man for giving Johnson county the Pacific railroad. Among others, the work of Major N. B. Holden (Holden, MO namesake), a member of the lower house, and W. H. Anderson was vigorous and effective. Mr. Anderson was the father of Dr. James I. Anderson. He made several trips to St. Louis for the road and helped much to get Col. Grover elected a director of the road. Col. Grover and Major Holden were both victims of the Civil War. Colonel Grover became a Union colonel and was mortally wounded at the battle of Lexington and died at St. Louis, October 30, 1861Gravesite. Major Holden was called from his bed and assassinated at his residence in (Old Town) Warrensburg, September 21, 1862. Gravesite.
Johnson county voted $50,000 bonds to have, the Pacific railroad built through this county but owing to the intensity of the struggle which the river counties made to get the railroad. Johnson county citizens subscribed to $100,000. This was necessary to complete the million dollars required to be subscribed by the counties of the state through which the railroad was to run. A branch locally called "The Quarry Switch" runs two miles north of Warrensburg to the Sandstone quarries.
The Pacific railroad is now part of the Missouri Pacific system and is its main line between Kansas City and St. Louis. The second railroad to be built in Johnson county was constructed under the name of the St. Louis & Santa Fe railroad. 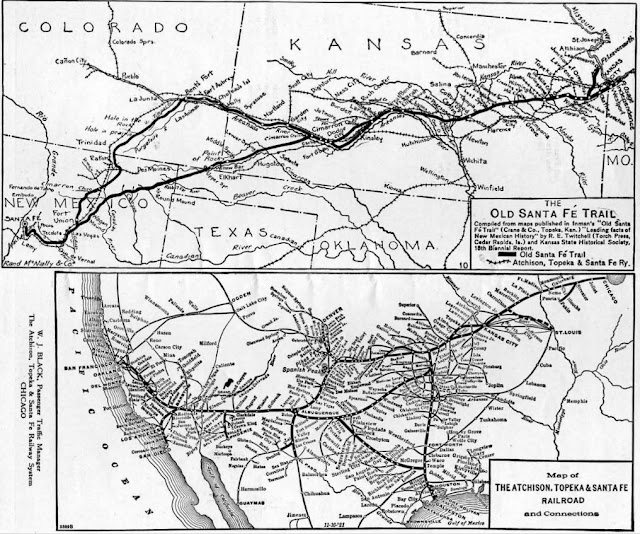 This road runs from Holden southwest through parts of Madison, Kingsville and Rose Hill townships, and through Harrisonville to Paola, Kansas. This road was built in 1870 and for a number of years was operated by the Missouri Pacific and is now a part of the M. K. & T. 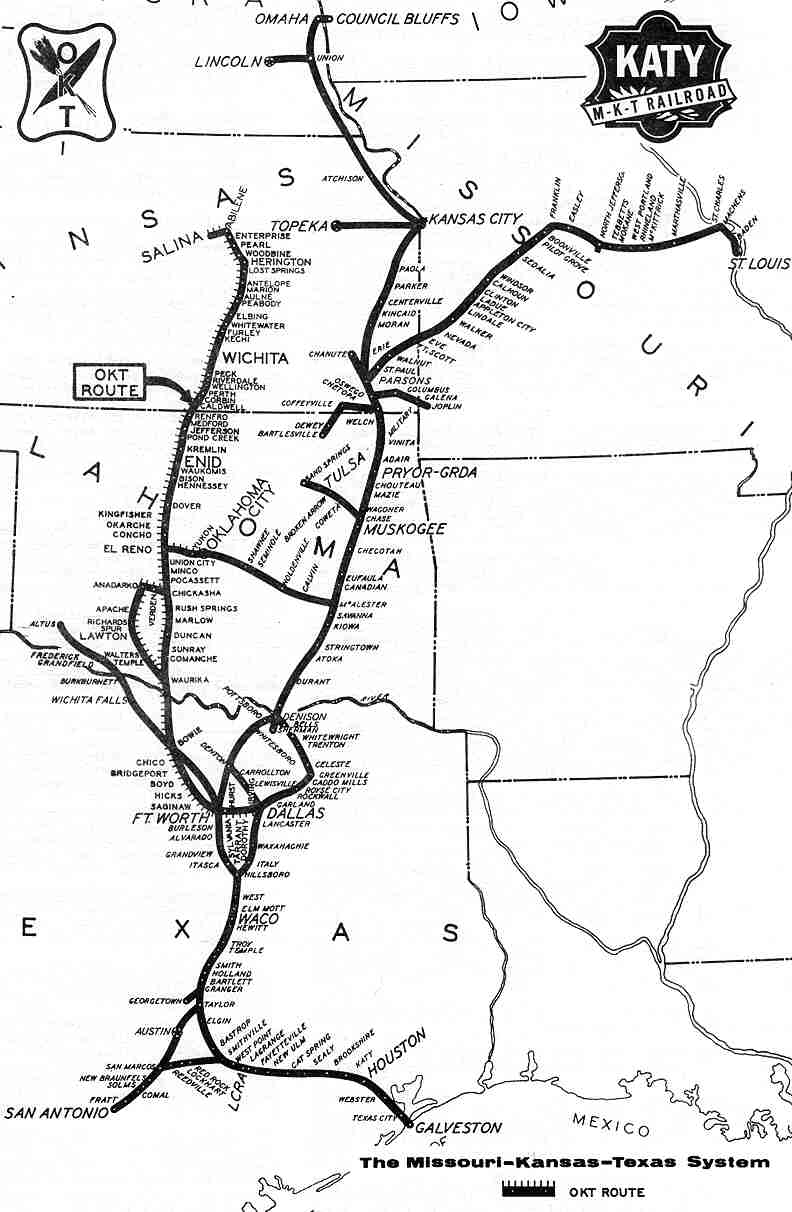 The next road to pass through Johnson county was the St. Louis & San Francisco railroad. This road passes through the southwestern corner of the county and Rose Hill is the only township which it intersects. It was built in 1886.
There are two stations on this line in Johnson county, Latour and Quick City. The next railroad was the Missouri, Kansas & Texas railroad which was built from Holden to the main line of the Missouri, Kansas & Texas at Bryson in Pettis county. This road runs in a southeasterly direction from Holden to Chilhowee and thence east through Leeton into Pettis county. It was built in 1895.  MK&T Map Link 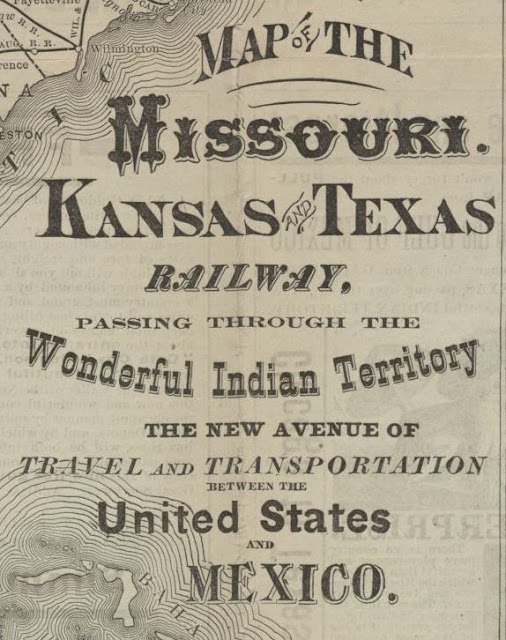 It now joins the old St. Louis & Santa Fe railroad at Holden. Thus the Missouri, Kansas & Texas has a line across the county from east to west. Its stations in this county are Holden, Magnolia, Chilhowee, Leeton and Sutherland. The last railroad to be built in this county was the Chicago, Rock Island & Pacific which runs from St. Louis to Kansas City. chicago_rock_island_and_pacific_railroad
This road enters the county on the west in the southern part of Kingsville township and runs in an easterh' direction through the townships of Rose Hill, Chilhowee. Post Oak, and Jefferson, leaving the county in the latter township, where it crosses into Henry county at Bowen. It was completed in 1906. Its stations are Medford. Denton, Chilhowee, Leeton and Bowen.
This makes six railroad lines in the county. Of the fifteen townships in the county, ten of them are intersected 1) by one or more railroads and of the other townships not one is more than five miles from a railroad. Johnson county, like many other sections of the West, had its epidemic of railroad projects. In the days of railroad "wild-catting" there were many railroad rumors and railroad booms that never reached the stage of steel rails and many of them never even got as far as the preliminary survey.
One of these projects seemed a probability. This was a railroad from Warrensburg to Marshall (the bed is still visible in areas along the Blackwater North of Warrensburg), in Saline county. 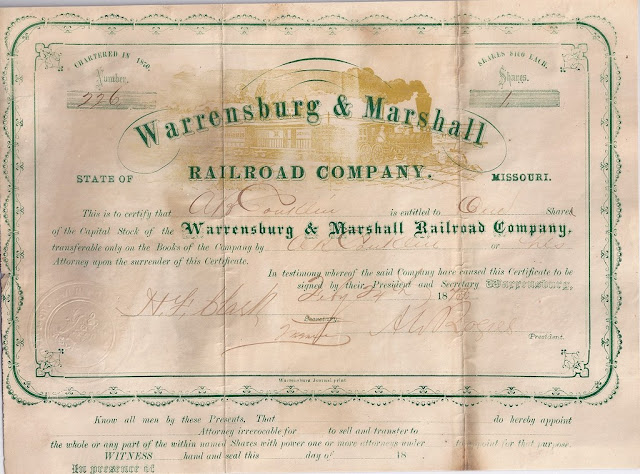 In 1870 Johnson county voted $100,000 for the construction of this road. The road was surveyed and graded from Warrensburg northeast, for a distance of thirteen miles. It was then discovered that the balance of the money necessary to complete the construction of the road could not be raised and the project had to be abandoned. There was also $40,000 raised in the county by private subscription.
The old grade running down Post Oak creek and thence northeast along the north side of Blackwater bottom still remains and is a well-known landmark in that part of the county. At some places its cuts have been dammed and make fine ponds, and at one place in the bottom the public road runs on one of its fills.
History of Johnson County 1881