I recently found a letter from Sculptor Bill Hopen dated 1985.  It was addressed to Buddy Baker.

and contained pictures of the artist at work 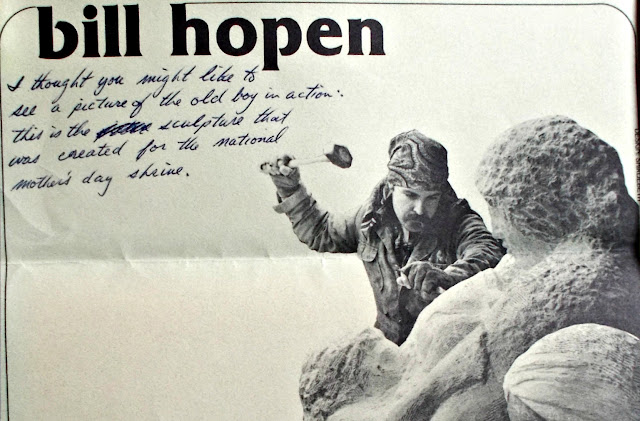 along with notes about he was doing in West Virginia.

He included a phone number, so I called him and asked how he came to know Buddy Baker and what connection he had with Johnson County.  He sent me some notes (highlighted in green) in an email.
"In 1972, I had driven from NYC to Warrensburg with my household possessions and a few tools in a Jeep...the plan was for me to arrive a month earlier to look for a place to stay and some work in advance of my fiance arriving from NYC by plane. (she would attend graduate school at CSMU for psychology)  I worked a little as a carpenter with Don Kendrick, lived in a campsite, but found it very difficult to find a house to rent.
"My fiance and I had been still camping in Knob Noster park,  we had broken camp and driven into town to rent from John and Jan Angel, (their little garage apartment)....We got there with all our possession jammed into the Jeep Wagoneer. There had been a misunderstanding... when I had arranged for the apartment, John and Jan thought it was for a single renter..not a couple. Jan said "but wait a minute...let me make a call." It was after Ten, but she called Buddy, and said "are you still awake?' she asked what he had for rent, and then John led us over to Culton Street where we met Buddy, who greeted us in his cheerful way and gave us the keys as he showed us the house. Next morning he showed us the garden out back and gave us a tomatoes that were bigger than a softballs, warm from the sun, never had I tasted such a fantastic salad as we had for lunch that day,  Buddy in his friendly neighborly way had also given us some of his home canned "chow-chow" garnish for our hamburgers.
"The next day, John Angel came by and asked me if I wanted work in tree trimming, so I had work too. 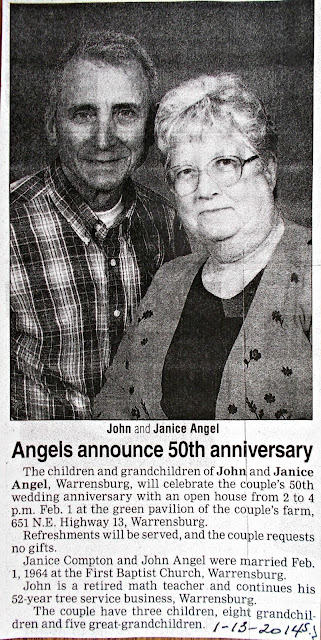 "and then another tree trimmer/handyman  "the Lil' Giant" Ben Frasier learned of me from John and hired me as well, eventually training me as a climber. 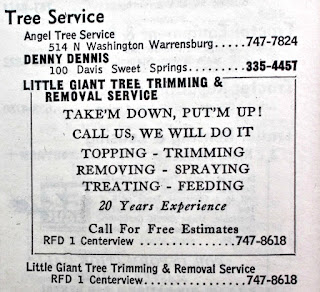 I ended up partnering with both of them eventually. I learned a lot about tree work, carpentry, tools and mechanics, square trade, business, philosophy of life, wheelin' and dealin' from John and Ben. I had trained in college as an artist, mostly in painting, but I had no work experience, I lost my parents early in life, my mother had died while I was in college, so it was in Warrensburg that I learned to take care of myself financially and began to learn business and trade skills.
I've always said, that though I didn't know it at that time, the two years I spent in Warrensburg were my "graduate school".   All the working with tools, with my hands in wood, welding metal etc. were training for my career as a sculptor.   I had become a master of material, I could cut and carve and fabricate and weld and plaster and I built upon those tools and skills that I learned in Warrensburg, bringing my vision as an artist into three dimensions as I became a sculptor. I left Warrensburg a skilled craftsman with a trailer full of tools. I had  fixed up three houses as rental units (with the help of mentors like Buddy and John Angel in rental business) so I had a little income to sustain me.
Peggy Nuckles: "Buddy remembers that you bought three houses on Madison Street that he later bought from you.  He thinks that you bought them with Bill Angel and that you later tossed a coin to determine who would buy out the other partner's half."
Hopen: True story, we flipped for it, the winner of the toss (at Johnston county title office) got to buy the 50% interest in the house from the other partner for $2000.  I called "heads", I won, I felt like a kid winning at monopoly...I had three houses in a row.
Buddy:  "I remember, when he left town he asked me to manage his three houses.  I told him I would for a 6% commission, but he insisted I take 15%."
In the letter Bill mentioned the houses that Buddy was apparently still managing for him in 1985.

(Buddy eventually bought Bill Hopen's houses on Madison Street and then sold them to the City. Warrensburg's police headquarters is now on that site.)
Hopen continues:
"I had also learned about life in small town America and found it a better fit for me than the NYC rat race.   I eventually settled in a little town in West Virginia,in 1974-5. began to carve wood and do stained glass as side work to my carpentry and tree work... 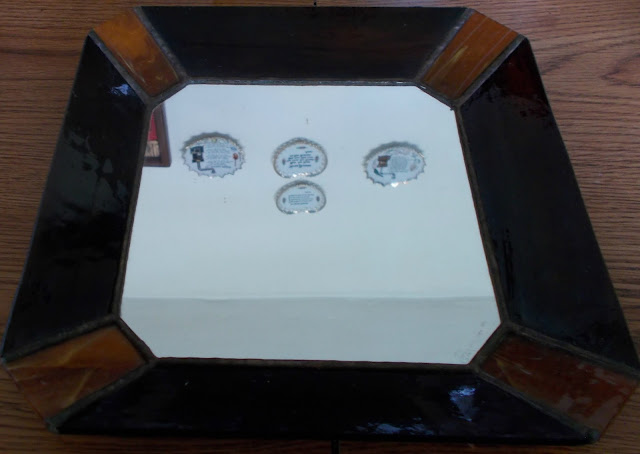 One of Buddy's treasures is this stained glass piece 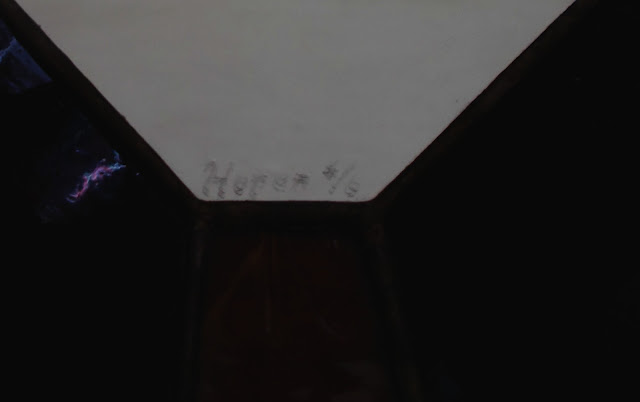 signed by the artist Hopen
Eventually interest in my art and more of my income came from producing artwork, by 1978 I was a full time artist and won a WV state grant to became an "artist in residence" for two years. I soon won a few commissions carving wood and large stone artworks eventually winning my first commissions in bronze in the early 80's.    My art has since come back to the Midwest, with 16 life size bronze figures placed in Kansas.  My largest commission,$420,000, was for the "Wedding at Cana" in the Spiritual Life Center, in Wichita KS 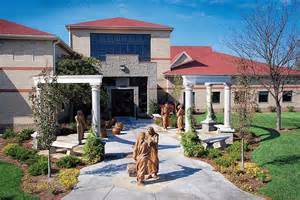 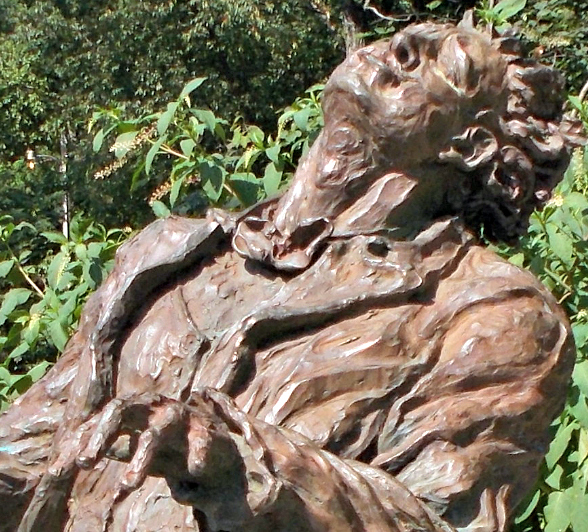 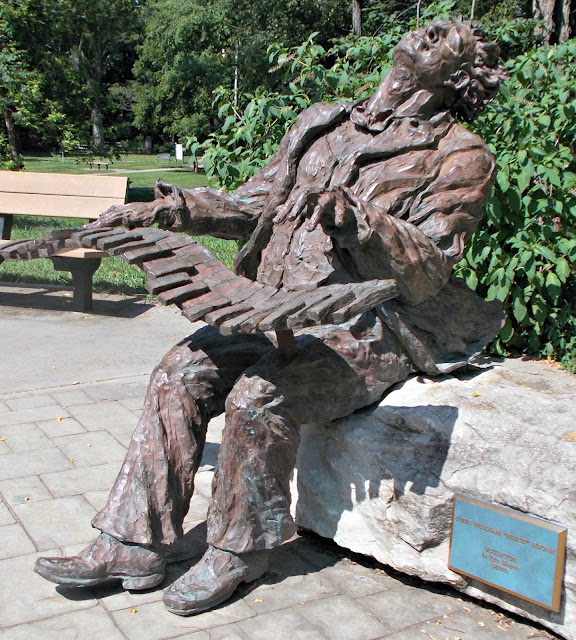 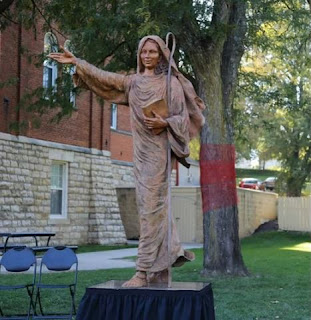 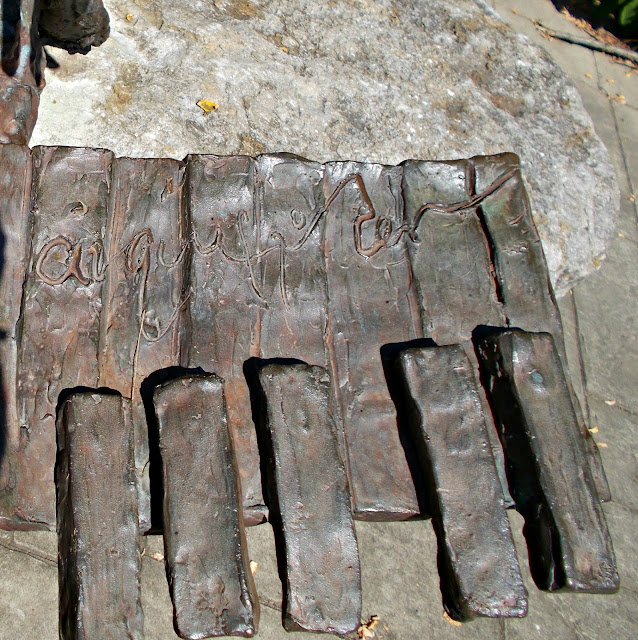 Look carefully at the keyboard and you can see her signature. 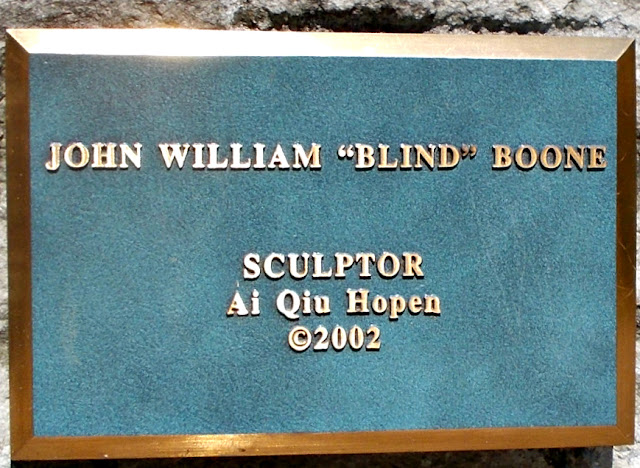 Here is a link to a video about her life that shows Ai Qiu Hopen working on the Blind Boone Statue. She begins talking about it in detail at around 22 minutes.
Click on the picture. 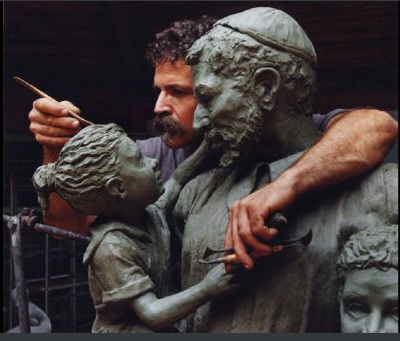 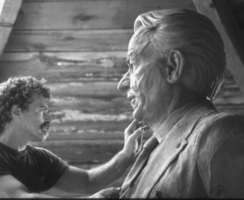 Sculptor Bill Hopen of Sutton was born April 13, 1951, in New York City. His works appear in government buildings, museums, churches, and hospitals across West Virginia, elsewhere in the country, and abroad.


Hopen studied painting at Lehman College, a branch of the City University of New York, and is largely self-taught as a sculptor. In the mid-1970s, he moved from Manhattan to Sutton. West Virginia hardwoods and stone were the materials that he first used for carving. Later in his career he devoted himself largely to sculpture cast in lead crystal, bronze, and other metals.


In 1982, Hopen completed his first public sculpture commission, a marble Mother’s Day memorial in Grafton. Hopen’s commissions include two works at the state capitol, a 10-foot-tall bronze statue of Sen. Robert C. Byrd and ‘‘Fallen Partner,’’ a statue honoring state law enforcement officers who died in the line of duty; a bronze of St. Francis of Assisi at St. Francis Hospital in Charleston; ‘‘Immigrants,’’ a large exterior concrete installation at the Harrison County Courthouse in Clarksburg; bronzes of St. Joseph and Jesus at St. Joseph Hospital in Parkersburg; and ‘‘Mortality,’’ a bronze memorial to Hawks Nest Tunnel Disaster victims at Tamarack in Beckley.
Other public commissions appear in Baton Rouge, New York, Wichita, and elsewhere, and Hopen’s works are included in many private and corporate collections. Hopen married sculptor Ai Qiu Chen in 2001, and the couple maintains studio facilities near Shanghai as well as Sutton. 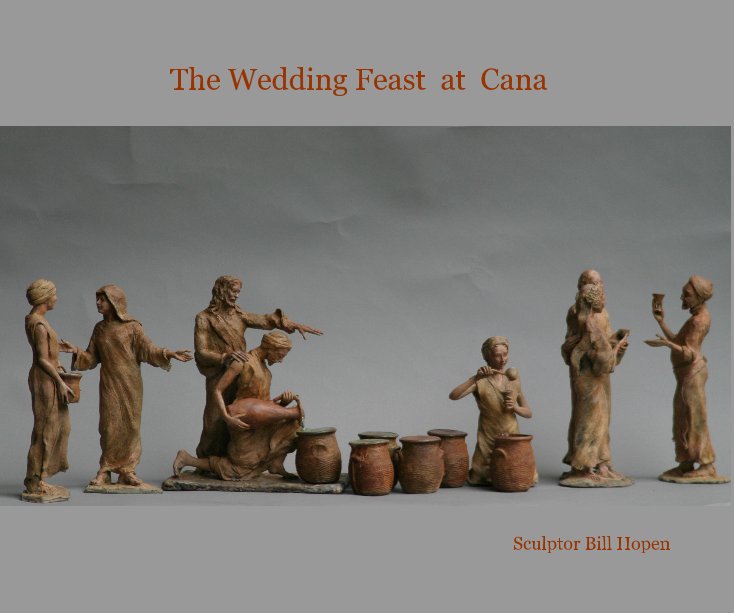 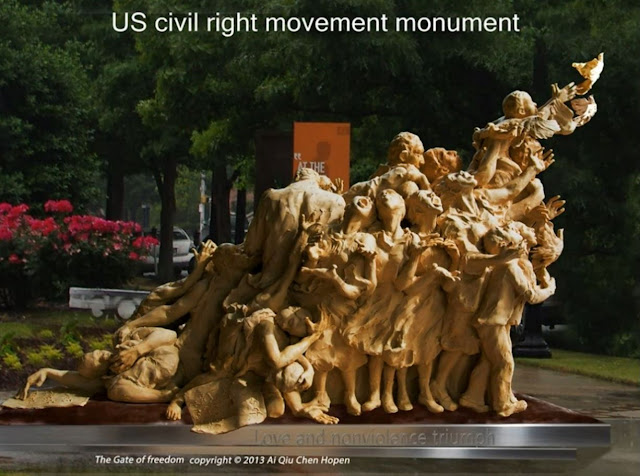 Artist statement
Art is a crystal medium where our souls communicate.
art reaches the deepest, widest, most infinite dimensions
and uplifts the soul from within
art is a crystalization of thoughts, reflecting our souls as in a mirror....in which we see more clearly , we awake and ascend
Resonance awakens our wings, we fly towards light... strength.......freedom.......
Aiqiu Hopen, 3/31/05

Think through
all the morning
and all the night
as a chrysalis
draws the silk of shining light
then
sculpt
and fly as butterfly
Aiqiu Hopen, 6/26/03
published "Images of America" Warrensburg Missouri, Lisa Irle, Arcadia 2002
photos of art and artist, bio