Thanks to Peggy Nuckles. 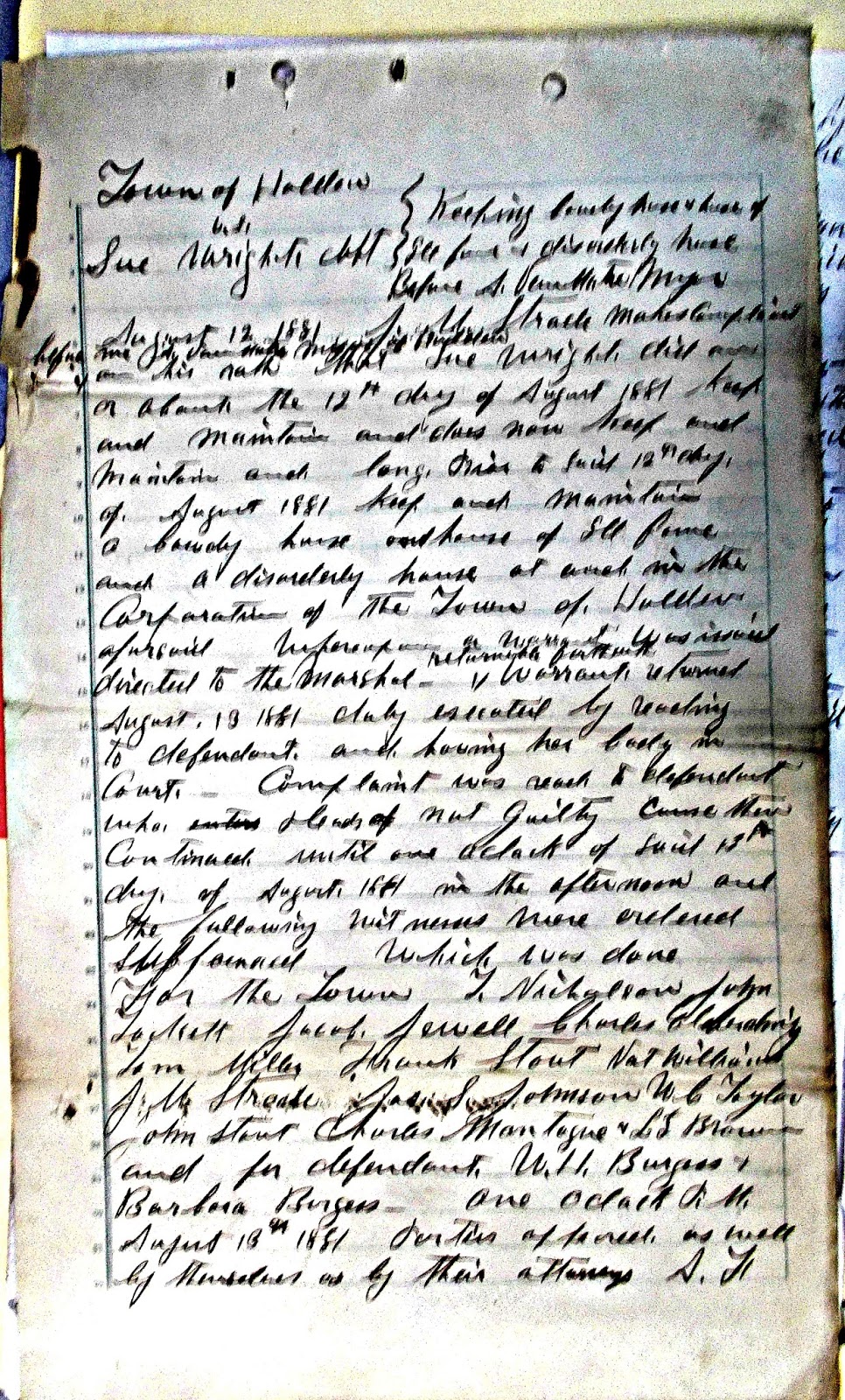 Keeping bawdy house + house of ill-fame + disorderly house
Before A. VanMatre, mayor, J.U. Strate makes complaint before me, A. VanMatre, mayor of Holden, on his oath that Sue Wright did on or about the 12th day of August keep and maintain and does now keep and maintain and long prior to said 12th day of August 1881 keep and maintain a bawdy house and house of ill fame and a disorderly house at and in the corporation of the town of Holden aforesaid. Wherefore a warrant was issued August 13th 1881 duly executed by reading to defendant and having her body in court.  Complaint was read to defendant who pleads not guilty.  Court was continued until one o'clock of said 13th day of August in the afternoon and the following witnesses were ordered step forward which was done for the town. T. Nickleson, John Lockett, Jacob Jewell, Charles Elderding, Tom Miller, Frank Stout, Nat Williams, Jim Strode, Jason S. Johnson, W. C. Taylor, John Stout, Charles Montague, + L.S. Brown and for the defendant W.H. Burgess and Barbara Burgess.  One o'clock p.m. August 13th, 1881 as well by themselves or by their attorneys S. F. 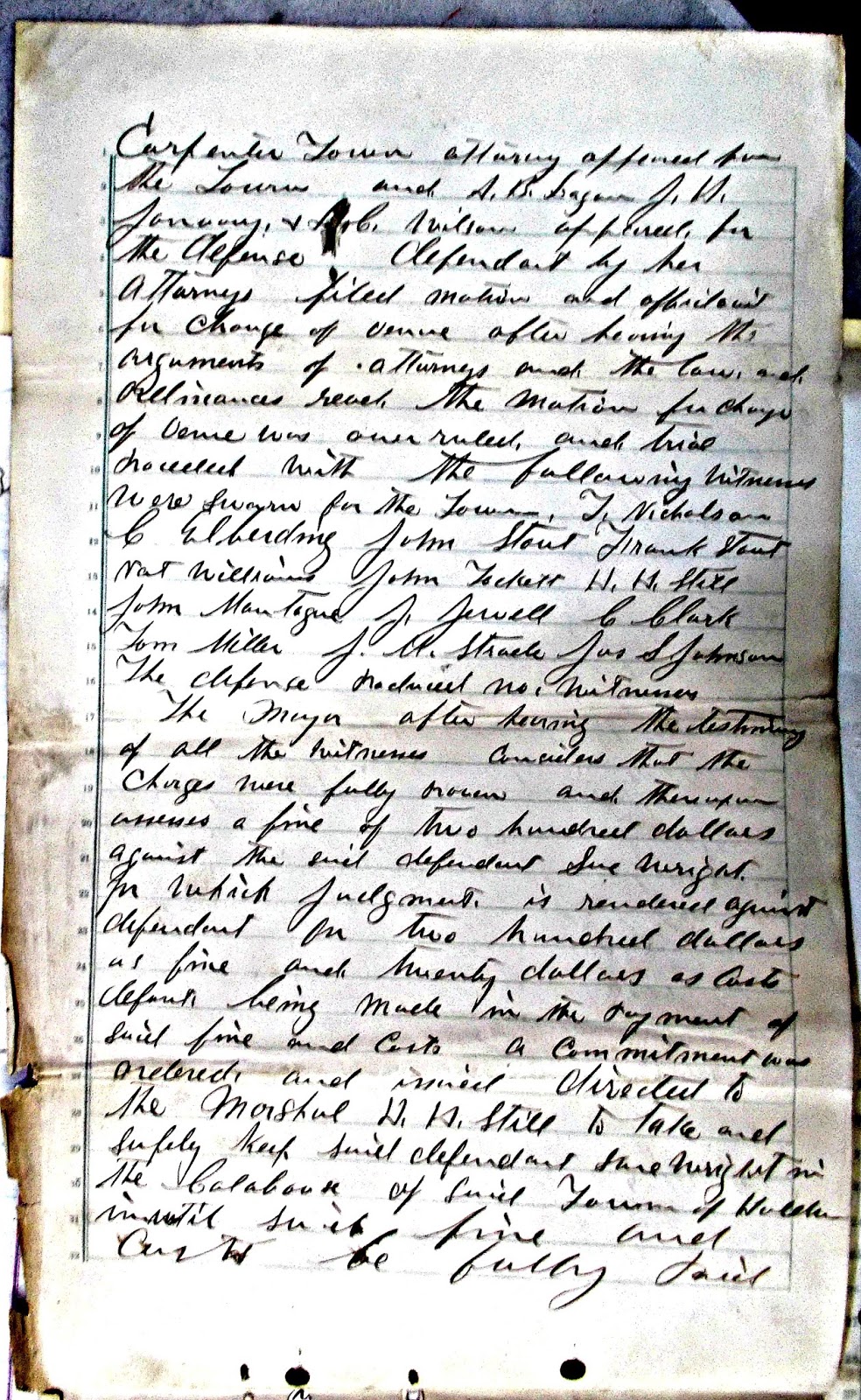 Carpenter town attorney appeared for the town and A.B. Sagan, J.M. January, and Bob Milan appeared for the defense. Defendant by her attorneys filed motion and affidavit for change of venue after hearing the arguments of attorneys and the law and ordinances read, the motion for change of venue was overruled and trial proceeded with the following witnesses were sworn for the town. T. Nicholson, C. Elberding, John Stout, Frank Stout, Nat Williams, John Tackett, H. H. Still, John Montague, J. Jewell, C. Clark, Tom Miller, J. U. Strade, Jas. S. Johnson.  The defense produced no witnesses.
The mayor after hearing the testimony of all the witnesses considers that the charges were fully proven and thereupon assesses a fine of two hundred dollars against the said defendant, Sue Wright, for which judgement is rendered against defendant for two hundred dollars as fine and twenty dollars as costs default being made in the payment of said fine and costs.  A commitment was ordered and issued directed to the Marshall H.H. Still to take and safely keep said defendant, Sue Wright, in the calaboose of said town of Holden until such fine and costs be fully paid 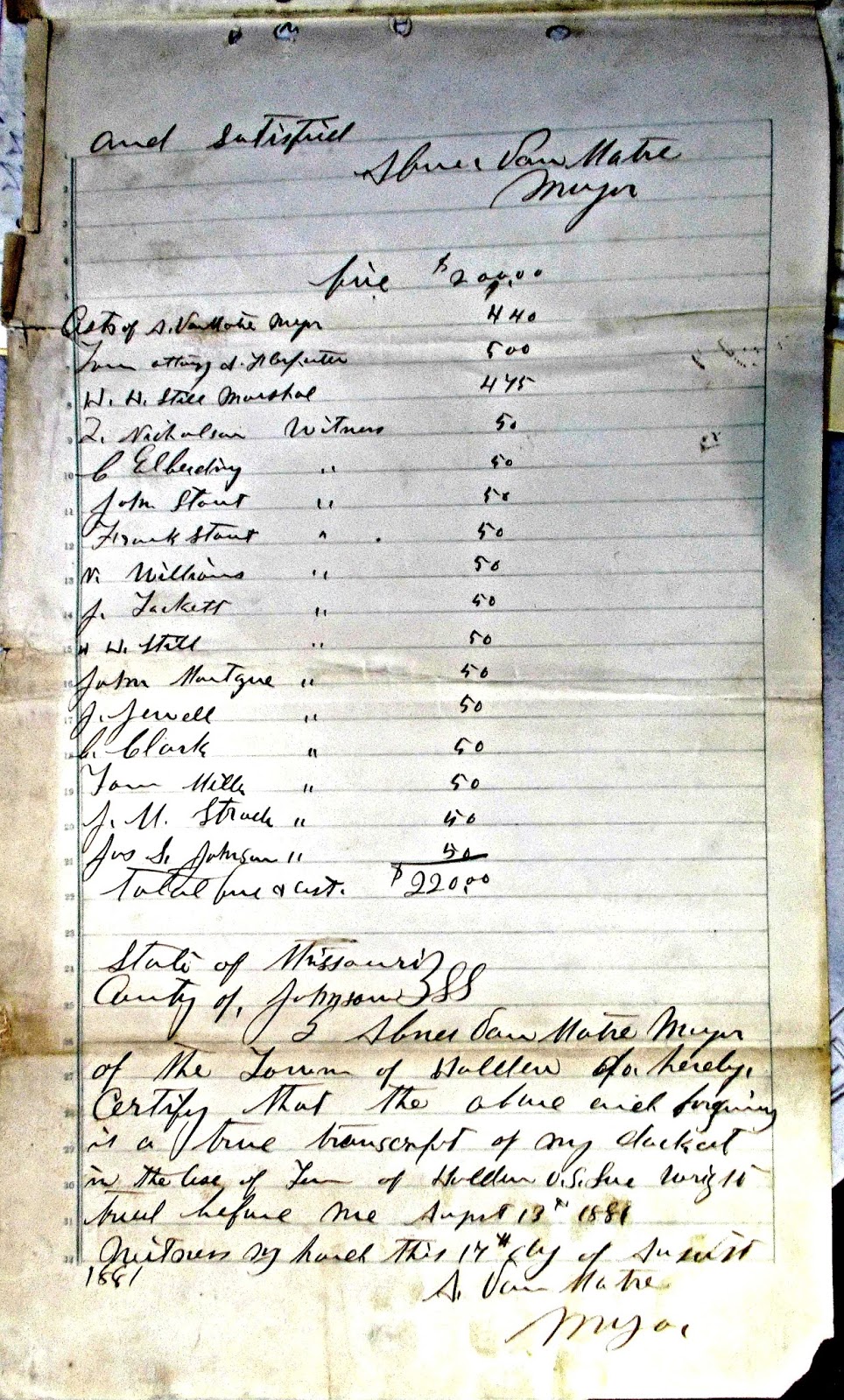 State of Missouri
County of Johnson
I, Abner VanMatre mayor of the town of Holden do hereby certify that the above and foregoing is a true transcript of my docket in the case of the town of Holden vs. Sue Wright trial before me August 13th, 1881. Witness my hand this 17th day of August 1881.
A. VanMatre
Mayor 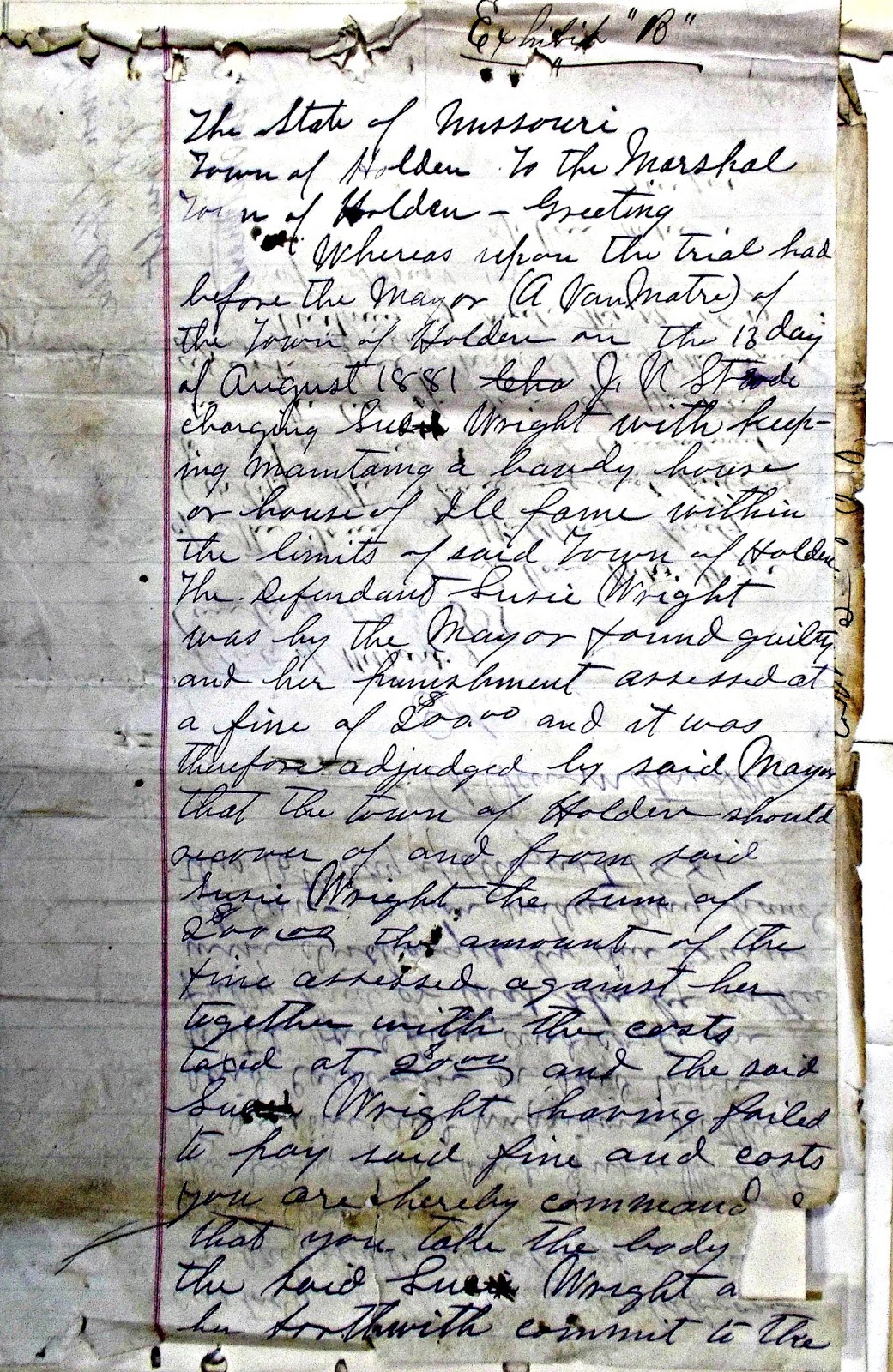 The State of Missouri
Town of Holden to the Marshall
Town of Holden Greeting
Whereas upon the trial had before the Mayor (A. VanMatre) of the town of Holden in the 13th day of August 1881 J.C. Strode charging Sue Wright with keeping, maintaining a bawdy house or house of ill-fame within the limits of said town of Holden. The defendant Susie Wright was by the mayor found guilty and her punishment assessed at a fine of $200.00 and it was therefore adjudged by said mayor that the town of Holden should recover of and from said Susie Wright, the sum of $200.00 the amount of the fine assessed against her together with the costs taxed at $20.00 and the said Susie Wright having failed to pay said fine and costs you are hereby commanded that you take the body -- the said Sue Wright a-- forthwith commit to the 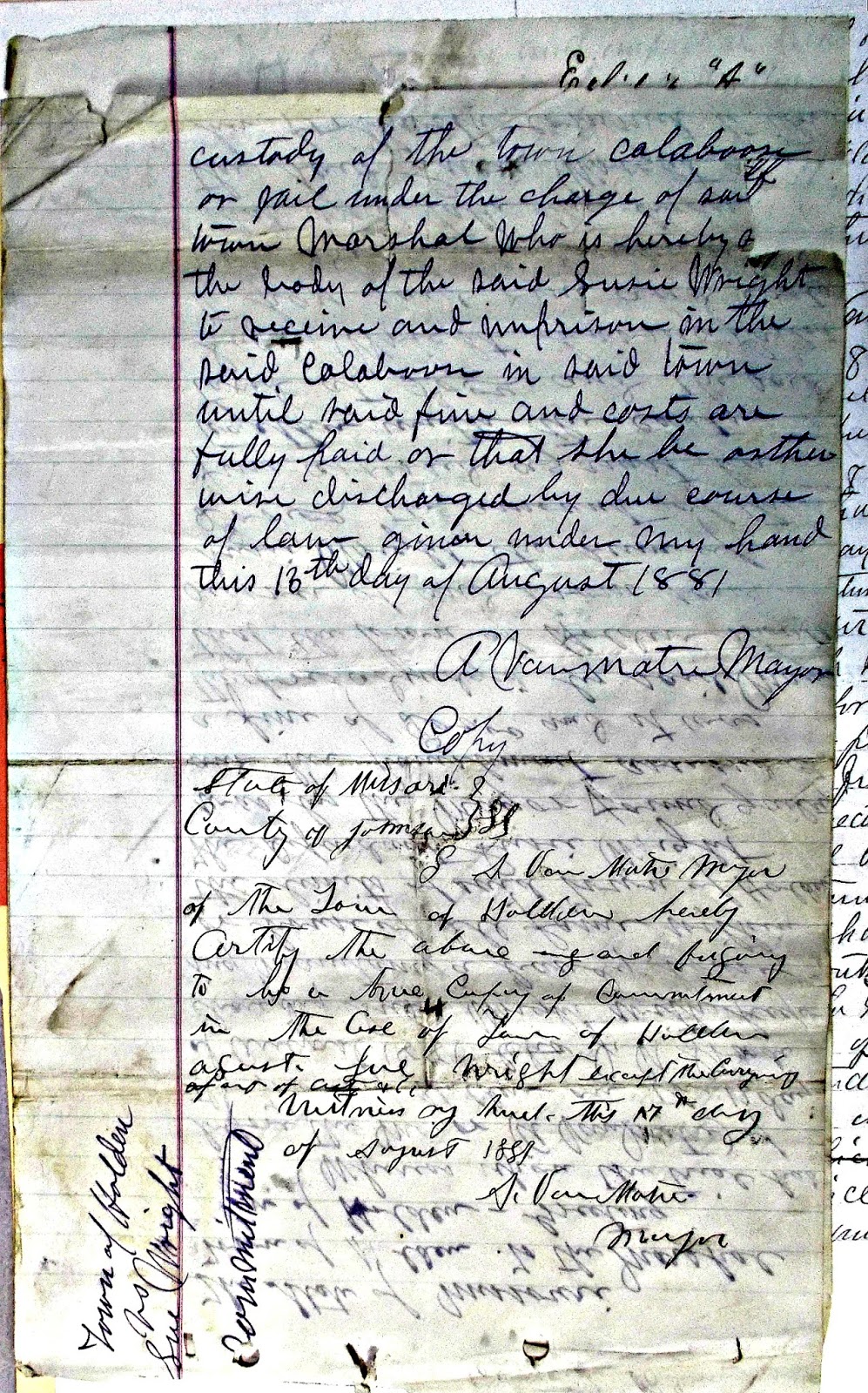 custody of the town calaboose or jail under the charge of said town Marshall who is hereby a-- the body of the said Susie Wright to receive and imprison in the said Calaboose in the said town until said fine and costs are fully paid or that she be otherwise discharged by due course of law. Given under my hand this 18th day of August.
A. VanMatre, Mayor 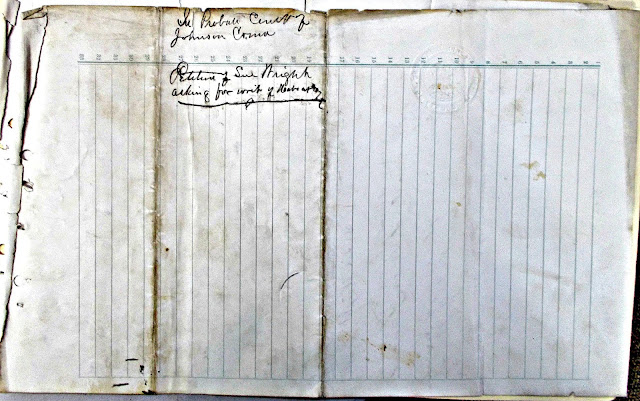 In Probate Court of Johnson County
Petition of Sue Wright
asking for a writ of ...(?)... 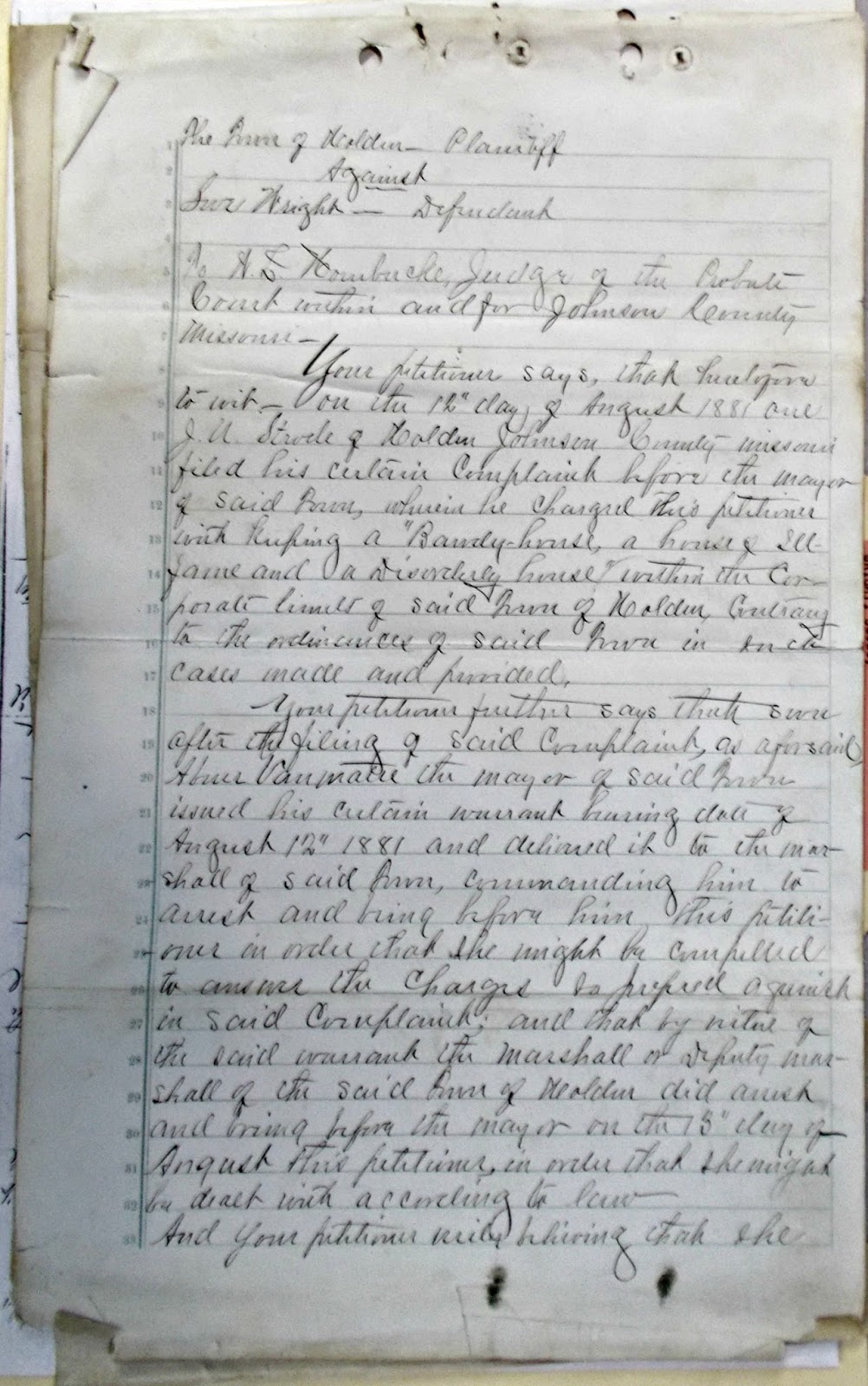 The Town of Holden - Plaintiff
Against
Sue Wright - Defendant
To A.L. Hornbuckle Judge of the Probate Court in and for Johnson County Missouri
Your Petitioner says that heretofore to wit that on the 12th day of August 1881 one J.U. Strode of Holden, Johnson County Missouri filed his certain complaint before the mayor of said town wherein he charged this petitioner of keeping a "bawdy house, a house of ill-fame, and a disorderly house within the corporate limit of said town of Holden contrary to the ordinances of said town in such cases made and provided.
Your petitioner further says that soon after filing of said complaint as aforesaid, Abner VanMatre the mayor of said town issued his curtain warrant having date of August 12, 1881 and delivered to the Marshall of said town commanding him to arrest and bring before him this petitioner in order that she might be compelled to answer the charges so prepared against in said complaint and that by virtue of the said warrant the Marshall or deputy Marshall of the said town of Holden did arrest and bring before the mayor on the 13th day of August this petitioner in order that she might be dealt with according to law.
And your petitioner verily believing that she 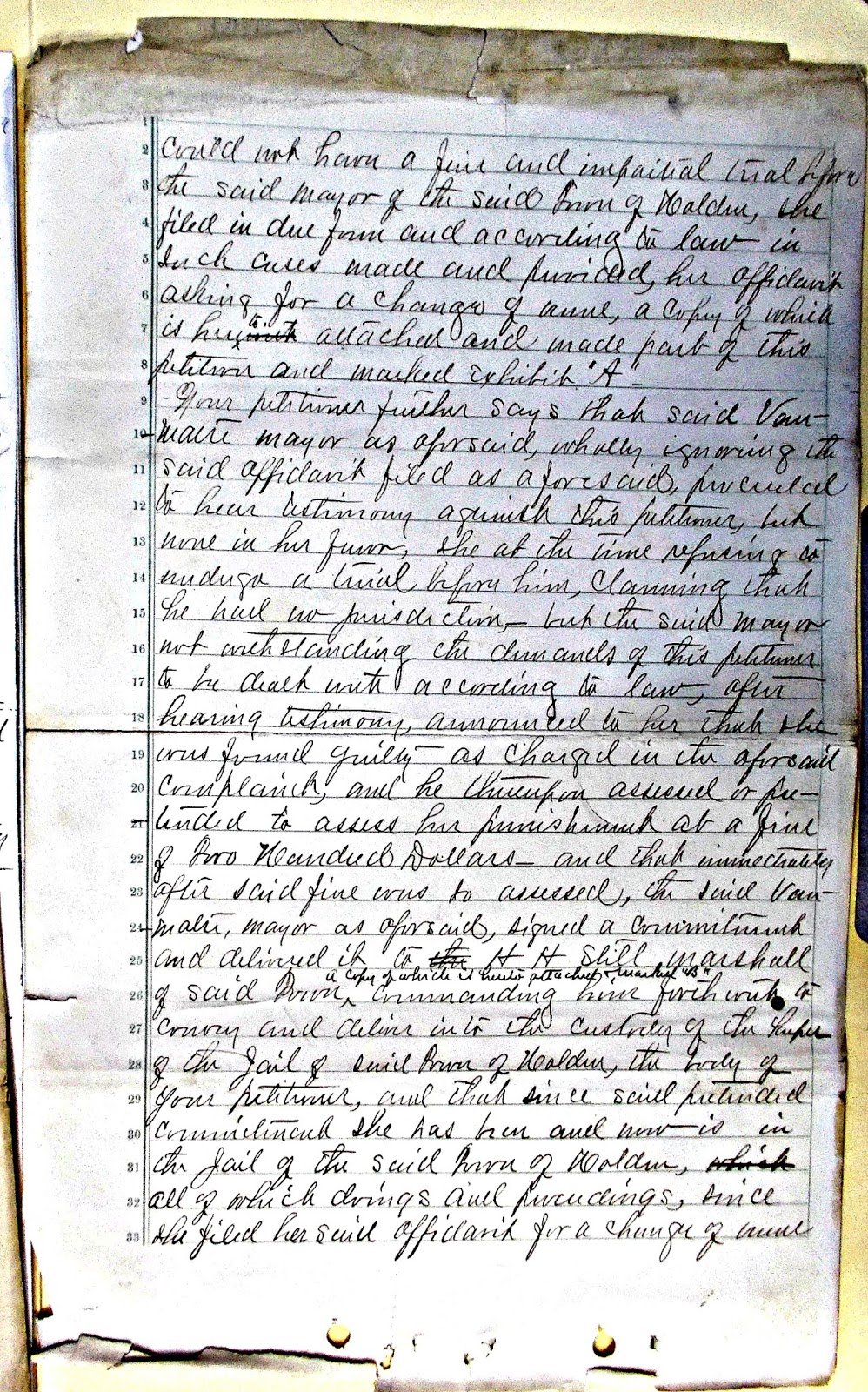 could not have a fair and impartial trial before the said mayor of the said town of Holden she filed in due form and according to law in such cases provided her affidavit asking for a change of venue a copy of which is hereto attached and made part of this petition and marked Exhibit A. Your petitioner further says that said VanMatre mayor as aforesaid wholly ignoring the said affidavit filed as aforesaid proceeded to hear testimony against this petitioner but none in her favor she at the time refusing to undergo a trial before him claiming that he had no jurisdiction but the said mayor not understanding the demands of this petitioner to be dealt with according to law, after hearing testimony announced to her that she was found guilty - as charged in the aforesaid complaint, and he therefore assessed or pretended to assess her punishment as a fine of two hundred dollars and that immediately after said fine was so assessed the said VanMatre, mayor as aforesaid signed a commitment and delivered it to H.H. Still, Marshall of said town a copy of which is hereto attached commanding him to forthwith to convey and deliver into the custody of the keeper of the jail of said town of Holden the body of your petitioner and that since said ...(?)... she has been and now is in the jail in the said town of Holden all of which doings and proceedings since she filed her said affidavit for a change of venue 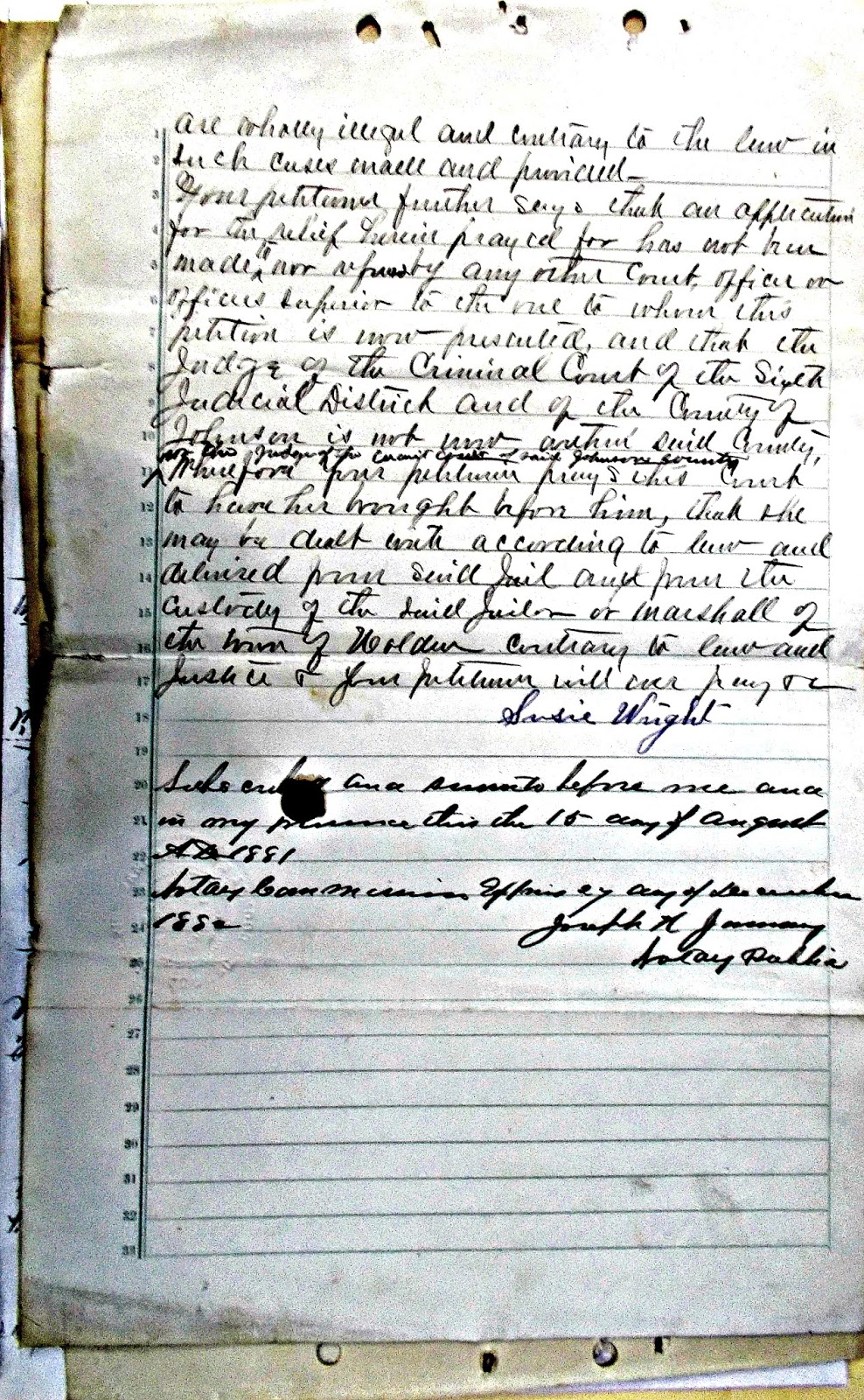 Your petitioner further says that an application for the relief herein prayed for has not been made to nor refused by any other court, officer or officers superior to the one to whom this petition is now presented and that the Judge of the Criminal Court of the Sixth Judicial District and of the County of Johnson is not now within said county nor the judge of the circuit court of said Johnson County wherefore your petitioner prays this court to have her brought before him, that she may be dealt with according to the law and delivered from said jail and from the custody of the said jailer or Marshall of the town of Holden contrary to law and justice + your petitioner will ever...(?)
Susie Wright