The influenza pandemic of 1918-1919 killed more people than the Great War, known today as World War I (WWI), at somewhere between 20 and 40 million people. It has been cited as the most devastating epidemic in recorded world history. More people died of influenza in a single year than in four-years of the Black Death Bubonic Plague from 1347 to 1351. Known as "Spanish Flu" or "La Grippe" the influenza of 1918-1919 was a global disaster.


In his book, Disaster in Leeton, Bob Wyatt writes.


"Spanish influenza was a more severe version of the typical flu...  Extreme chills and fatigue were often accompanied by fluid in the lungs.  One doctor treating the infected described a grime scene. 'The faces wear a bluish cast; a cough brings up the blood stained sputum.  In the morning the dead bodies are stacked about the morgue like cordwood.'

"...All doctors could do was try to make the patients comfortable, which was a good trick since their lungs filled with fluid and they were wracked with unbearable coughing.  The 'bluish cast" of victims' faces eventually turned brown or purple and their feet turned black.  Some developed bacterial pneumonia which added even more agonizing secondary infections."

Johnson County residents weren't worried about the Spanish Flu at the beginning of 1918.  Cases of Small Pox had appeared around the county and people lined up for vaccinations.

Leona Narron, a 19-year-old girl who worked in Warrensburg at the Vitt-Mayes Overall Factory recorded this in her diary:

"Jan 14.  Tryed to work but didn't get much done.  All the girls in the factory was vaxanited but me I was not.  They was all scared they would get the small pox."

The Warrensburg Standard Herald published this article on Feb 1, 1918.

There are numerous cases of smallpox in Warrensburg.  Our residents are keeping the physicians busy doing vaccination work, and it is hoped the disease will soon be stamped out.

Leona didn't get smallpox but did contract measles later in the spring as an epidemic of that disease spread through the county.

All through 1918 her mother was dying of tuberculosis. One hundred years ago, life expectancy was very short as people died of diseases that are rare today.

Bob Wyatt writes, "Between the speed of the outbreak and military censorship of the news during World War I, hardly anyone in the United States knew that a quarter of the world's population --had been infected with the deadly disease."

Late in August another soldier mysteriously died, This was described in a letter from Leona Narron to her boyfriend, Carl Baker. 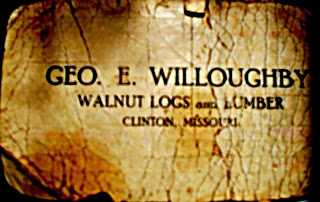 Then another soldier from Clinton got sick. Carl's father worked for Mr. Willoughby cutting and hauling logs. Annie Baker wrote:

Dearest Carl
Mr willoughby's boy enlisted in the navy + first had influenzea + then developed in pneumonia + he is in a critial condition + Mr. Willoughby is with him in Chicago."

"Oct 1 1918
Dearest Carl
Mr. Willoughby's boy died Friday + they brought him home yesterday + he was buried today.  He told Dad about it over the phone yesterday.

My Dear Little Husband,
...We are all well hevent any of us got the flue yet.  Papa told Florence and I we had to take a dose of quinine tonight he said that would keep us from taking it ut no quinine for me.  I dont think I am going to take it any way.  I think the flue is a great deal better.  But there was another man died with it yesterday.  Maby you know him, he merried Mary Easterwood. I have heard his name but I don't remember what it was." 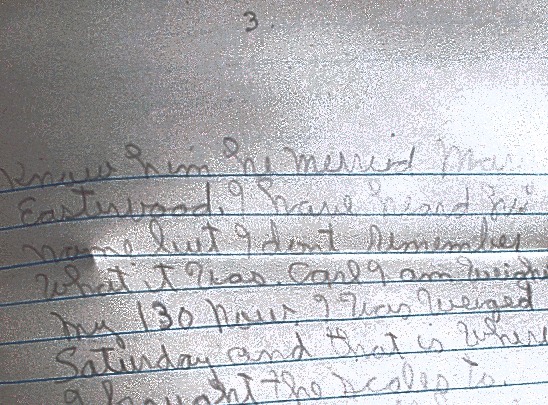 Dearest Carl
We went to the show last night they are going to stop school + the churches + high school + the show on account of the Spanish Flue... There is quite a scare here now of that Spanish Flu.

Glenn (Carl's brother) isn't hauling logs now as Layfatte Co in quartitine so they can't do anything over there til that is over....hope you don't get the flu.

Dearest Carl
...I thought maybe you had influ as that seems to be the order of the day now... Mr. Willoughby say they are dying in Clinton at the rate of 5 a day with the Flu. 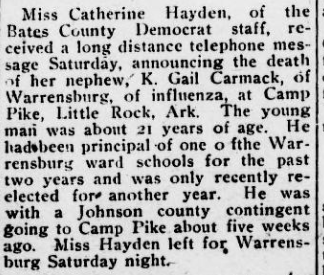 Nine days after Leona made her diary entry about Mrs. Lawes, she wrote to Carl 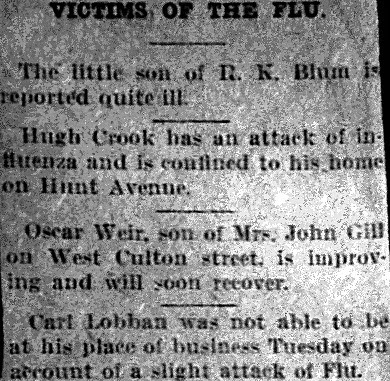 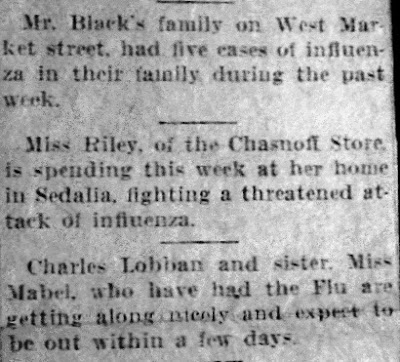 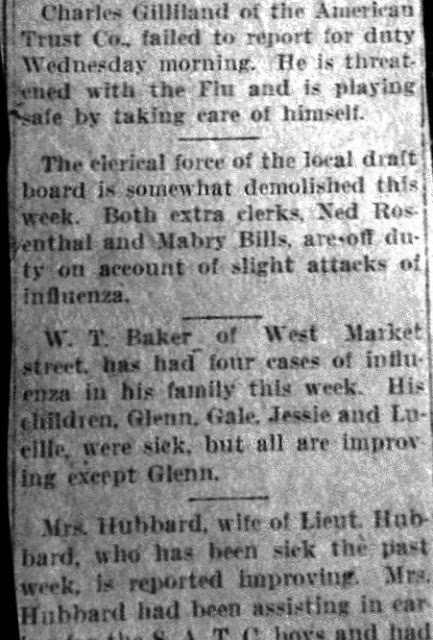 ...the kids all started to school again this morning Earline (Annie Baker's youngest of her 12 children) is better but not well yet She cant walk around any yet She is so weak + Aunt Lue is here in bed + Maw on the grunts + I sure dont feel like I can stand to do much more...

Shermy Anderson died + was buried yesterday it sure was sad.  He was here last week + talked to me abut an hour asked about you boys + ege Henderson Died this moning so Henry Shackleford told me... Aunt Liz Breeden was here just now + she said Mr. Hammond died last night.
Mother to Carl

Dearest Carl
This leaves all well but me + I have been nearly sick for a week.  They all say I have got the Flu but I wont have it that way.

...I called Leona + Florence said she was sick in bed + all the rest of the kids but her was in bed with the Flu.  Nearly every body here in town had the flu.

Dearest Carl,
Robert Hatfield died last night He was Bobs only boy now He had the Flu.
Yours with lots of love, 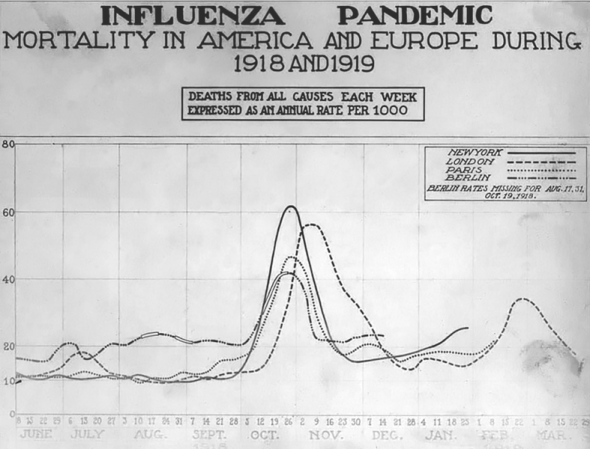