Story link
John Warne Gates was at one time a hardware store owner in Warrensburg! 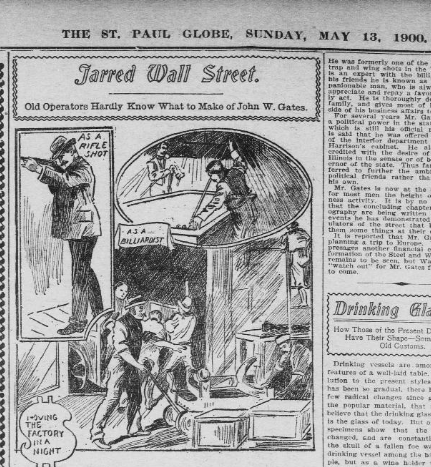 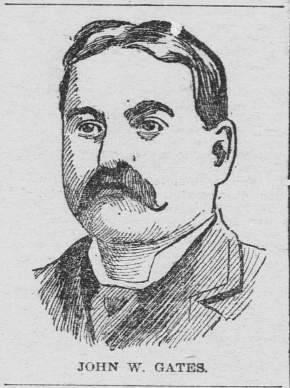 The Guthrie Daily Leader
Thursday, June 22, 1899
Submitted by: Bob Chada
MURDER WON OUT. A Sister, After 29 Years of Silence, Accuses Her Brother of a Crime.
Paris, Mo. Word was received here yesterday stating that Sheriff Simmons, of Wichita, Kansas, had received a letter from Mrs. Cornelia Street, of Shawnee, Oklahoma, accusing her brother, Alexander Jester of a murder committed in this county in 1871, a crime which has been one of the unsolved mysteries. The letter which Sheriff Simmons received reads as follows:
"I wish to make a statement to you in regard to my brother, whose name is Alexander Jester, who was arrested near Valley Center, Kansas, in the year of 1871, May 2, for killing a young man for his team, watch and clothing. The murder was committed in Missouri, near Warrensburg. My brother was arrested for murdering this young man and I know of my own personal knowledge that he is guilty of the charge. He was given a preliminary hearing in Wichita and was sent to Missouri, near where the crime was committed, and broke jail. He is my own brother, and I want him punished for that crime, hoping you can and will find on the dockets his preliminary hearing, and will notify officers of the county where the murder was committed. My brother is living here in Shawnee, and is known by the name W. H. Hill. Hoping to here from you in reply, very respectfully, Cornelia Street."
Story of the Crime
The letter is in error regarding the place of its committal, the name of the murdered man, or boy, as he was then, and the place where Jester was confined in jail. The crime was committed or is supposed to have been committed, near Middle Grove, this county, about fourteen miles southwest of here, and an indictment against Jester, bearing date of November 16, 1871, is still on the records of this county.
In the fall of 1870 Gilbert Gates, a young man, started from south western Kansas for his home near Alton, Ill. He wrote his parents that he was in company with a man named Alexander Jester, and that he had with him a buffalo calf, a deer and an antelope. His parents heard from him regularly until he reached Middle Grove, this county, on the old Hannibal and Glasgow road. Here all track of him was lost.
His father came here and spent a great deal of money investigating the case and finally captured Jester. When Jester was caught, he had the young man's watch and the antelope skin vest. He had sold the wagon and team in Illinois and was making his way back up the Missouri river to Kansas. He was brought back to Paris for trial and placed in jail and a chain of circumstantial evidence wrought about him by F. L. Pitts, now state treasurer, then sheriff of this county, that almost insured a death penalty.
He was given a preliminary hearing and indicted for murder in the first degree. A. M. Alexander, who was afterwards a member of congress from this district, was then prosecuting attorney for this county. A change of venue was secured to Mexico, Mo. A lynching party of several hundred men was organized, but the officials getting wind of it, hurried the prisoner off in the night to Mexico, where he subsequently broke jail and escaped, nothing having ever been heard of him from that time until this.
Body Was Never Found
The young man's body was never found. It is supposed by many that Jester cut a hole in the ice and put him in the creek, now known as Allen's creek, near Middle Grove. The night on which the murder was committed was a very cold one, in January, 1871, and there was snow on the ground two feet deep.
Blood was found at different places where the wagon stopped. Many think that the body of the dead boy was covered up in the wagon and left at Wetmore & Cisseli's livery barn on the night that Jester passed through Paris. Search was made for the body but to no avail. The parents of Gates spent almost a fortune in the search and plowed up acres of ground in futile attempts to find the body. There was no motive known for the murder except robbery.
Some of the county's most prominent men were summoned as witnesses and jurors. Many of the older citizens recall the details of this ghastly crime as though it happened yesterday.
Jester, who is not 80 years of age, is known in Shawnee as W. H. Hill. Sheriff Simmons, it is understood, has requested the Oklahoma officers to arrest Jester.
Hannibal history: Attorney Harry Carstarphen recalls area murder trial of Alexander Jester
October 6, 2014 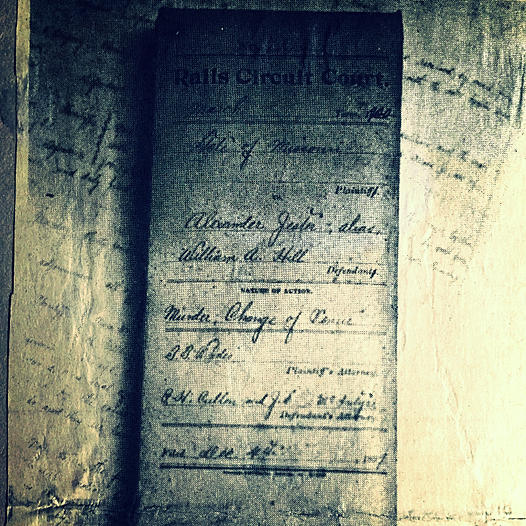 Originally published in the Hannibal Courier-Post Feb. 23, 1980 By Mary Lou Montgomery
LOCAL LEGACIES
Harry Carstarphen, a local attorney, was a schoolboy in New London, Mo., during 1900 and remembers witnessing one of the most publicized events ever to be held in the Ralls County Courthouse.
It was the murder trial of Alexander Jester, alias William A. Hill, who was charged with the murder of a young man named Gates. The murder occurred in the late 1850s, or the “Gold Rush Era,” Carstarphen remembers, and Jester was finally brought to trial when he was in his 80s.
The 49ers were young men of the decade who decided to go west to California in search of gold in the mountains. They traveled by covered wagons drawn by oxen or horses, and many young men pursued the heroic endeavor. Alexander Jester was reportedly one of the 49ers.
The murder in question was alleged to have occurred on Salt River Ford in Monroe County where the trail crossed Salt River, Carstarphen says. Jester was arrested for the murder in Indiana and brought back to Monroe County for trial. He escaped, however, before the trial began.
The murder victim was the younger brother of a Chicago citizen who thereafter became known as “Bet a Million Gates.” The elder Gates was a prosperous man who searched unsuccessfully for Jester more than 40 years. Jester, then using the name of Hill, signed up for a land drawing during the Oklahoma land rush, when the government surveyed the Indian Territory land and provided for deeding the land in a drawing. Carstarphen recalls that his uncle, Thomas Carstarphen, also participated in the drawing.
Jester went to the drawing but thereafter fell out with his sister. The sister later identified him to “Bet a Million Gates” who then located him and arranged to have him arrested and returned to Monroe County for trial. The case was later moved to Ralls County, where the trial lasted from July 9 to Aug. 1, 1900 – 40 years after the murder.
Criminal lawyers came from Chicago to prosecute Jester. The jail and court house in Ralls County were only a block from the school and the students attended the trial.
The prosecuting attorney for Ralls County was J.W. Hays, who later practiced in Hannibal. He and the Chicago lawyers prosecuted the case with local defense lawyers P.H. Cullen and J.S. McIntyre.
Carstarphen describes Jester as a man over 6 feet tall who wore a white beard which extended down to his waistline, and he was bent forward with age. The sheriff, the father of Judge Harry Weaver, and Landale Wittamore escorted him back and forth from the court to the jail and back. The Ralls County Record reveals that there were 80 jurors called in for qualification and the 12 selected are the great-grandfathers of hundreds of residents now in the area.
The jurors were: Henry W. Bramblett, John T. Elzea, John Northcutt, J.E. Willis, Joseph F. Barry, who was the foreman, C.A. Jones, Henry L. Leake, Porter S. Fischer, James W. Phillips, Alfred W. Menefee, H.L. Jarman and Berry W. Saunders.
The three-week trial ended with the jury’s verdict of not guilty. 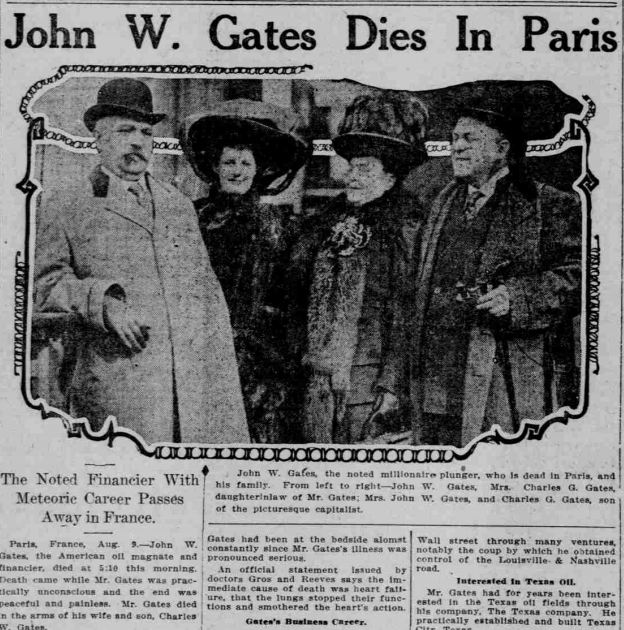 Barbed wire salesman, manufacturer, gambler, investor, John Warne "Bet-a-Million" Gates was born in Turner Junction, DuPage County, Illinois, to Asel and Mary (Warne) Gates. His father was a farmer. His two older brothers were killed before they reached 20 years of age, leaving him an only child at fifteen. Gates' first business venture was in hardware. After little success, he went to work selling barbed wire in Texas for the Washburn-Moen Company. On his arrival in San Antonio in 1876, Gates set up a barbed wire corral in a rented plaza and invited ranchers to bring in their meanest fence-busters to prove the slim wires would hold them. The demonstration was a success, and Gates returned to Illinois with more orders than the company could fill. When he was refused a partnership, Gates quit Washburn-Moen and moved to St. Louis, where he began manufacturing and distributing unlicensed and un-patented barbed wire. When court orders couldn't beat him, his competition joined him and Gates became legal once again. Gates went on to form a string of companies to produce barbed wire: Consolidated Steel and Wire Company, American Steel and Wire Company, Illinois Steel Company, and Republic Steel Company. Gates was also a canny investor in other people's businesses. He invested in the Kansas City, Pittsburg & Gulf Railroad, at Arthur Stilwell's request, and later took over, renaming it the Kansas City and Southern Railroad. He also invested in the Spindletop oil field, an investment which resulted in the Texas Company, now Texaco. This investment earned Gates millions. Gates contributed much to the city of Port Arthur following his initial investment in Stilwell's scheme. He constructed new docks, the First National Bank, the city's first light, power, and ice company, the area's first rice mill, and the Plaza Hotel. He contributed money to build Port Arthur Business College and St. Mary Hospital. He was instrumental in having Port Arthur declared an international port of entry.