J. A. Lamey, of the Lamey Manufacturing Company of Sedalia, Missouri, established in 1907 a branch factory on North Holden street, where the Lobbans' Garage was later located. H. E. Vitt was superintendent of the Lamey Manufacturing Company of Warrensburg for six years and  then purchased the factory from Mr. Lamey. For two years, he operated it as the H. E. Vitt Manufacturing Company, making shirts, overalls, and pants for the jobbing trade. In 1913, a young man named Harry Royal Garrison joined the company.  H.R. Garrison was born in 1886 in Shell City, Mo, but he moved with his parents to Johnson County in 1892 when he was only six years old.  Hs father ran the old St. Cloud Hotel.  H.R. graduated from Warrensburg High School and attended the Warrensburg Normal for several terms. In 1907 HR Garrison married Wyota Campbell the daughter of RL Campbell, the chairman of the board of directors of the American Trust Company of Warrensburg That same year the couple went to Garvin Oklahoma where he worked for six years for the Bank of Garvin He returned to Warrensburg in 1913 and accepted a position as secretary and treasurer of the Vitt Mayes Manufacturing Company.

In 1914, the company was reorganized as  the Vitt-Mayes Manufacturing Company which produced clothing for the retail trade. Two salesman were immediately put on the road. By 1918, there were ten salesmen traveling for the Vitt-Mayes Manufacturing Company. The
officers of the Vitt-Mayes Manufacturing Company were E. H.Vitt, president; F. L. Mayes, vice-president; S. H. Coleman, second vice-president; H. R. Garrison, secretary and treasurer. The other stockholders were L. Campbell and Charles Gillilan. This company employed nearly 100 people. The output of the factory averaged five hundred dozen garments weekly. Seventy-five machines were in constant operation, each controlled by moter power. The office, stockroom, and shipping department of the company were located on East Pine street in Warrensburg. The factory and warehouse were located at 109 and 111 East
Market street. The products of this factory were sold in Missouri, Kansas, Nebraska, Iowa, Oklahoma, Colorado, New Mexico, Arizona, Montana, Illinois, California and Wyoming. The supply never equalled the demand. Vitt-Mayes Manufacturing Company made khaki uniforms for the United States Government, during WWI. Their celebrated trade-mark was a diamond shaped figure upon which is stamped, "If it's Vitts it fits." One thousand garments were made weekly and the factory soon increased the output to two thousand garments.
In 1918 a 19-year-old factory worker, Leona Narron, chronicled the working conditions of the women who sewed the clothes H.E. Vitt's concern for his employees is evident in entries made in her diary..___
Jan 14, 1918. Tryed to work but didn't get much done.  All the girls in the factory was vaxanited but me I was not.  They was all scared they would get the small pox. 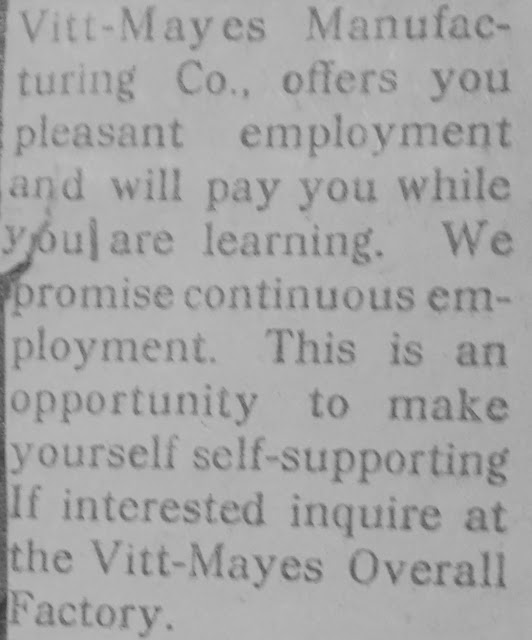 1918 Help Wanted ad
Apparently the employee were paid by the piece, not by the hour, and were free to come and go as they pleased.  Leona often wrote about working just and hour or two then leaving to hang out with friends.
Jan 12. Worked in the morning. Quite about 11 o'clock. Went down in town and seen Beulah.

May 15 Worked about an hour and a half in the morning.  Went down to town and seen Beulah's mother and went home with her.

Conversely employees were free to come in and work even when everyone else was gone.

Aug 27, 1918. This was a big day in town. They put up two flags one is a servis flag and the other is just a flag. The servis flag has a star in it for every Jaunson county boy... Almost all of the girls in the factory went down in town. But I did not there was any use for me to go and stand around in the hot sun and loose work when I could not do any good... When Eula Taylor and Maude Campbell came back to the factory I told them that I made 1.84.
They could draw their wages early if they wanted them.
_______
Sept. 12, 1918 Well, day after tomorrow is pay day I think I will make around nineteen dollars... I have drawed ten dollars so I won't get but nine.
The factory moved in 1918
Nov. 5 1918.  Mr. Vitt has bought the Opera House and is going to move the factory down there. But I don't think they will move before spring.
_____
He gave them Christmas bonuses.


Dec 24, 1918.  Mr. Vitt gave the girls in the factory a dollar a piece.  Its not much but every little bit helps.
____
Visitors were welcome and according to Leona, quite a few people wandered in and out, including this one.\
_____
Oct 4, 1918.  There was a soldier boy came up to the factory this morning and some of the girls acted like they was crazy over him.
________
Mr. Vitt also hosted social events for his employees at the factory
Feb 14, 1919, They are going to have a big dance up in the new factory one night next week.


The business was still known as the Vitt Mays Manufacturing Company through 1923.

Here's a picture of the employees at Vitt Mayes Manufacturing company taken at the corner of Pine and Washington July 3, 1923.

With no social security many people had to work into their old age. 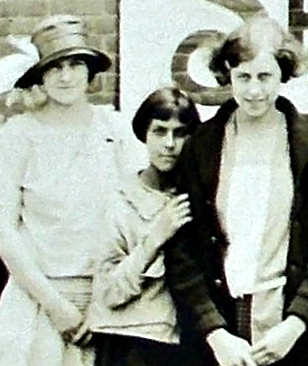 There were few restrictions as to child labor.. 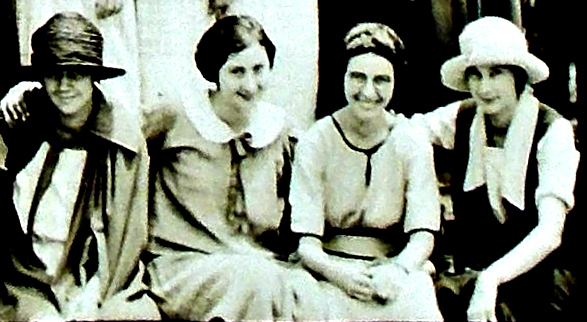 As with any other factory, some people liked their jobs.. 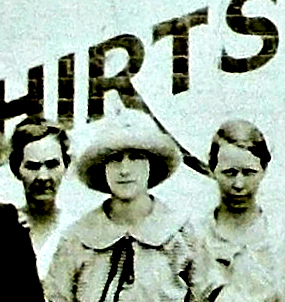 
In 1941. Aurther Dutton Brookfield, owner of a sales company known as Unitog, began shopping around for new manufacturers, and he met with Harry Garrison, president of Vitt, Mayes, Garrison Manufacturing Co. in Warrensburg, Missouri. Garrison had a good reputation for manufacturing quality clothing, and quality was a hallmark of Unitog. After the meeting, Garrison proposed a partnership between the two firms, so the Brookfield-Garrison Manufacturing Co. was incorporated that year, an equal partnership. Garrison was in charge of manufacturing, and Brookfield in charge of sales. In later years, Brookfield would take over the entire operation. 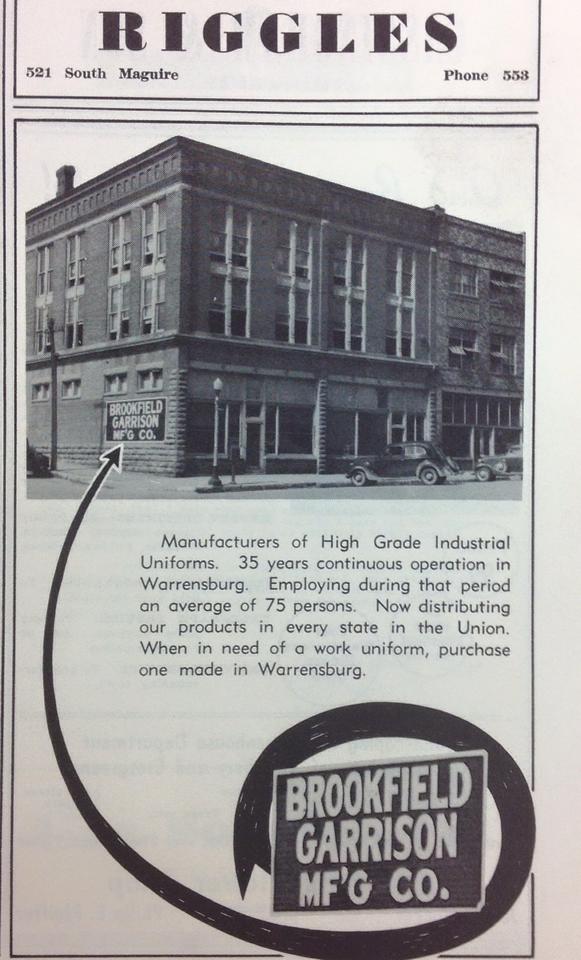 For the story about how Brookfield Garrison MFG became Utiitog see https://1973whsreunion.blogspot.com/2012/05/1932-unitog-founded-large-warrensburg.html