ENCOUNTER WITH HIGHWAYMEN, Holden, Mo., Nov. 12. It is reported that a party of traveling agents had an encounter with highwaymen a day or two since. The party was composed of Mr. McClain, and Mr. Miller, runners for St. Louis wholesale houses. and Frank Sicher, of Sedalia, and they were on their way from Gunn City, Cass county, to Holden, with a team and light spring wagon belonging to McClellan & Philips of this place.
Just as they were crossing Big Creek they were met by six men who had apparently stopped near the creek in the timber to feed their horses, which were hitched to the trees and unsaddled. As the party in the wagon drove down into the creek, and stopped to water their team, the robbers, each one of whom had a plentiful supply of revolvers, approached and entered into conversation with them, and when they started on, ordered them to halt. 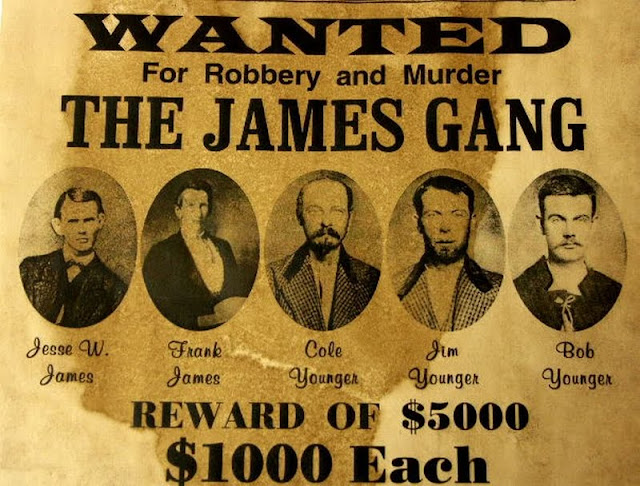 Instead of halting, however, the drummers laid the whip on their horses and escaped, but not without having four shots fired at them, none of which took effect. (The Columbia MO. Statesman newspaper, November 27, 1874 Page 4, Column 2 reported this as….”frightened by the James Boys near Holden").


Outlaws Jesse and Frank James, farm boys and sons of a rural Missouri preacher, served with William Quantrill and other southern guerrilla leaders during the Civil War. Frank participated in the massacre of Union supporters in Lawrence, Kansas, and both brothers were present at the murder of captured Union soldiers at Centralia, Missouri. When most surviving guerrillas turned to peaceful postwar pursuits, the James boys pursued outlawry. With various followers, including the Younger brothers, they robbed banks and trains from Missouri to Kentucky, killing citizens who resisted. At Gallatin, Missouri, they shot a banker, who supposedly killed a guerrilla leader during the war.


In 1876 the James brothers, with three Younger brothers and three other outlaws, targeted a bank in Northfield, Minnesota. One outlaw, probably Frank James, murdered the unarmed cashier; the gang also shot down another unarmed resident. Angry citizens fought back with rifles, pistols, shotguns, and even rocks, killing two outlaws and wounding most of them. In the subsequent pursuit, one outlaw was killed and the Youngers wounded and captured. Only the James boys escaped. Both brothers returned to outlawry but were not the threats they had once been. In 1882 Jesse was murdered by fellow outlaw Bob Ford, and Frank surrendered. Acquitted in a series of trials, Frank held several obscure jobs, teamed with Cole Younger in a Wild West show, and died in Kearney, Missouri, in 1915.


Lee's Summit's most infamous citizen was Cole Younger, called "The Last of the Great Outlaws" by author Homer Croy. According to history, soldiers drove Younger to a life outside the law after his father's murder and subsequent robbery. While Union forces were enforcing Order #11, the command issued in 1862 ostensibly to burn homes belonging to those with Southern ties, Younger and his brothers were credited with saving some of the original homes within Lee's Summit, the most prominent of which belonged to William B. Howard. Order #11 helped to unify the transplanted southern population in Missouri and compelled Younger to join the Confederate guerrilla band known as Quantrill's Raiders. Cole Younger was arrested after an attempted bank robbery in Northfield, Minnesota. Following 25 years of imprisonment for his crimes, Cole Younger was paroled in 1901. Three years later, Younger returned to Lee's Summit where he lived as a model citizen until his death in 1916. His grave is located in the Lee's Summit Historic Cemetery.