1860 - 2015 History of the Daily Star Journal and News of Warrensburg, Missouri


The newspaper and community are bound inextricably one to another, with The Daily Star-Journal today continuing the work of the newspaper’s forebearers by holding up a mirror into which the community sees its reflection, good or ill, accurately.


Dates and events provided herein – each footnoted and provided to the Johnson County Historical Society – are taken from a variety of sources, with most coming from the newspaper’s own pages.


1833: Martin Warren settled on land that would become Warrensburg.


1860, May 18: James D. Eads and J. Milton Bonham edited The Western Missourian, Warrensburg. The paper carried news and advertising, including about runaway slaves.


1861-1865: No one published a paper in the city during the war years. The county clerk, having lost an election to Marsh Foster, editor of the former Western Missourian, murdered Foster at the courthouse on Main Street in February 1861.


• July 20: Johnson County’s county records returned after being absent during the Civil War.


• Sept. 20: “The first Pacific passenger train completed a trip across the state, leaving Kansas City at 3 a.m. and arriving at St. Louis at 5 p.m. on the same day.”


1867: (circa) Vigilantes who first put to death murderers then went after other people, with guards posted at The Journal office “as threats were made against that paper for counseling the vigilantes to disband.”


• The newspaper reported the organization of the first teachers college in Warrensburg.


1868: The newspaper reported the organization of the first public schools in Warrensburg.

1876, Oct. 27: The Journal and The Democrat merged as The Journal-Democrat.
• David Nation, husband of Warrensburg’s nationally infamous bar basher, Carrie Nation, at one point served as a Journal-Democrat partner.
1878, Nov. 12: The Women’s Christian Temperance Union organized to address “drunkenness in our midst, notwithstanding that there are no licensed saloons,” but also expressed a belief that druggists in town sold alcohol and thus resolved to seek “suppression of the places of dubious character.”
1883, Nov. 22: Someone robbed the Hyatt and Boyle safe at Hazel Hill.
• The Johnson County Star moved from Knob Noster to Warrensburg.
1886, Nov. 6: The newspaper advertised Superior cook stoves.
1892, Jan. 1: Downhome humor would spin within the pages of the Warrensburg Journal-Democrat: “Stranger: ‘You say the editor died with his boots on?’ Printer: ‘Yes, sir. You see, he knew the town so well he wouldn’t pull ’em off for fear they’d steal his socks.”
1894: Mrs. Joseph Carmack, who would become a long-term Star-Journal employee, set type by hand.
1895: The Missouri Press Association, including Warrensburg’s newspaper, met at Pertle Springs.
1896, April 18: The newspaper reported Cora Carter, a student at St. Cecelia College, Holden, visited her relatives in Warrensburg.
1897, June 7: Fire burned the Gordon House on South Normal Avenue, the paper reported.
1898: The editor/publisher of The Journal-Democrat, Maj. Henry Reed, started raising a company to serve in the Spanish-American War.
1899: Murray Reed served as the Journal-Democrat’s news staff.

1900s
1900, Nov. 18: The newspaper quipped: “The electric fan has long since ceased to put on airs.”
1901, Feb. 3: A man and wife argued about who should get up to make the fire and the man won by slapping his wife, who then took him to court where he received a $1 fine.
1902, June 29: The newspaper reported Col. H.P. Farris owned a cycle-auto.
• Dec. 30: Wallace Crossley married Erma Cheatham.
1903: Wallace Crossley acquired The Star.
1905, June 15: James C. Kirkpatrick is born.
• Crossley began his first term in the Missouri House.
1911: Crossley finished his tenure in the Missouri House.
1912: Negotiations to combine The Journal-Democrat and The Star got under way.
• Crossley won election to the Missouri Senate.
1913: Crossley bought out his Star newspaper partner, W.C. Capp.
1914: Bill Tucker is born in Fulton, Mo.
• Crossley’s newspaper started a half century-stay at 108-110 W. Culton St.
1915, April 17: The staff celebrated The Journal turning 50.
• The newspaper reported that only the Dockery Gym survived a fire at the State Normal School, now the University of Central Missouri.
1916: Crossley became Missouri lieutenant governor.
1917: Crossley finished his tenure in the Missouri Senate and began serving as lieutenant governor.
1918, Feb. 6: Crossley combined the Journal-Democrat and The Star to create a single publication, The Star-Journal.
1921: Crossley became The Star-Journal’s sole owner.
• Crossley finished his tenure as lieutenant governor.
1922: Crossley served as a member of the state’s constitutional convention.
1925: Mrs. Bert Thompson began writing what became a long-time Daily Star-Journal column, New Hope.
1926: The newspaper reported completion of the first concrete parts of U.S. 50 through the county.
1927, Sept. 20: In what may be the first “Backward Glances” printed in The Daily Star-Journal, the paper stated the Warrensburg Chamber of Commerce planned to meet for lunch. “This is an important meeting and the committee hopes that at least 100 men will be present,” the newspaper reported.
• Sept. 21: The college achieved a record enrollment of 900.
• Kirkpatrick belonged to the first journalism class at Central Missouri State College.
1929: Tom Benton Hollyman moved to Warrensburg with his father, the Rev. John Hollyman, and family.
• James C. Kirkpatrick, who previously worked for The Normal Student publication at the Normal School in Warrensburg, began working in November for The Daily Star Journal. He later became The Star-Journal news editor.
1930: The newspaper reported that Gas Service Co. had 100 customers in Warrensburg.
1931, Jan. 22: The newspaper began publishing “No Hard Feelings,” a serialized version of the story of World War I Medal of Honor recipient John L. Barkley, Holden. He became the most decorated American in World War I. The first column in the series states stuttering almost kept Barkley out of the war.
• Feb. 6: The paper stated, “Born of high ideals and by able and efficient management, the paper has become indispensable to the reading and progressive families of Warrensburg and Johnson County.”
1932, June 7: The paper reported Warrensburg City Council would discuss having all electricians licensed.
1933: Crossley served as state relief administrator.
1934: Wallace Crossley finished his term as Missouri Press Association president.
• Kirkpatrick interviewed Senate candidate Harry Truman at The Star-Journal.
1935: University of Missouri School of Journalism awarded general excellence to The Star-Journal.
• “… Inside the door (to The Star-Journal) was the most bustle and urgency one could find in Warrensburg in 1935,” Tom Benton Hollyman wrote. A nationally recognized photographer, Hollyman early in his career “freelanced,” with the emphasis on “free,” for The Star-Journal.
1936, Feb. 3: The newspaper reported homes without water due to freezing temperatures.
1937, Feb. 17: The newspaper reported Warrensburg’s city marshal continued to investigate why fire claimed a 1927 Essex parked on Holden Street, on the wrong side, next to a fire hydrant.
1938, Nov. 9: The Star-Journal ran a national news story about Nazi violence against Jews, which became known as Kristallnacht; crowed at the success of the newspaper’s election night party; and reported doctors disagreed about the need for a Johnson County hospital.
1939, June: Hollyman took most of the photos for The Star-Journal’s modern publication, Photo News. In the 1939 section, Gov. Lloyd C. Stark remarked, “It is in keeping with the modern trend whereby newspapers keep their readers informed of current events not only through the medium of print, but by means of pictures.”

• MU School of Journalism awarded Crossley a journalism medal of honor.
1940, April 15: The Star-Journal’s diamond jubilee, marking 75 years in business, came and went with nothing about the anniversary. The issue included information about the Rev. J.C. Hollyman, Warrensburg, being named a Presbyterian commissioner at a denominational meeting in Rochester, N.Y.; news snippets about fighting in Germany; and an advice column by Dale Carnegie, who as a younger man had attended UCM.
• May 10: Robert Wadlow, 22, Alton, Ill., known as the Alton Giant for standing 8-11, visited Warrensburg. The newspaper reported he wore size 37 shoes. “Mr. Wadlow asked the tallest man in the crowd to get a silver dollar off Robert’s head. Donald Martin, a freshman at the college, surprised Mr. Wadlow and the crowd as well by standing on his tip-toes, and getting the silver dollar, which was presented to him by Robert Wadlow. Martin is 6 feet 8 inches tall and played on the basketball team at the college last year.”
• June 17: The Daily Star-Journal’s 1939 Photo News, a publication devoted to community photos, took first place in the National Newspaper Contest.
• July: Hollyman received recognition in print for his work on Photo News. He is described in personal terms: “fine, manly character, dependable, straightforward, enthusiastic, persistent…” The publication states further, “Tommy’s pictures have won numerous prizes for their quality and originality. Many have appeared in the rotogravure sections of metropolitan newspapers.”
• Bill Tucker married Avis Green.
• Kirkpatrick left The Daily Star-Journal to do publicity for a St. Louis brewery
1941, Dec. 8: The Star-Journal’s banner headline roared “U.S. DECLARES WAR ON JAPAN.”
1942, Aug. 10: Nan Carnahan Cocke born.
1943: Wallace Crossley died.
1944, March 14: The newspaper reported that while stationed in the South Pacific, Cpl. Bert Brasington, a clarinetist and son-in-law of W.M. Foster, Warrensburg, won $50 and a case of beer, in a talent contest.
• June 6: The newspaper announced, “ALLIES LAND IN NORMANDY,” making a same-day announcement of D-Day, when Allied forces invaded Europe, marking the beginning of the Allied drive on Berlin.
1945, May 8: President Harry Truman declared victory in Europe, or V-E Day.
• Aug. 6: Truman announced the United States dropped an atomic bomb on Japan.
• Aug. 15: The newspaper, using a 3-inch tall news headline, likely the largest headline in the paper’s history, yelled ecstatically, “JAPS SURRENDER.” Warrensburg held a noisy celebration.
• Nov. 18: The Star-Journal offered this observation: “Doing business used to be more fun than a barrel of monkeys but we can hardly tell the difference anymore.”
1946, Feb. 3: The newspaper reported the college would become the location for 10 temporary federal housing units.
1947: Bill and Avis Tucker bought and began to operate The Daily Star-Journal. 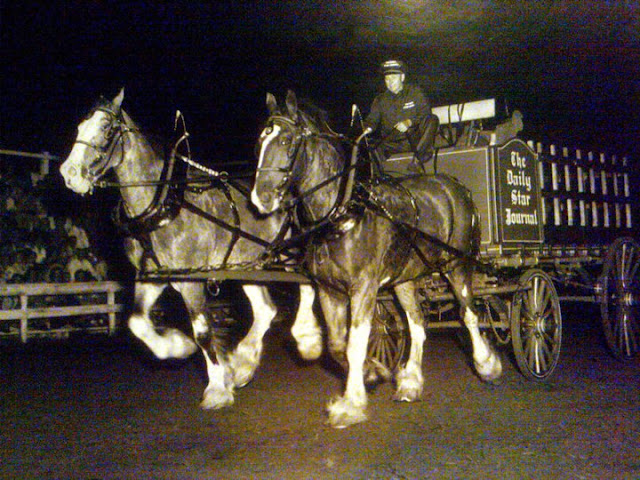 Buddy's (Baker) father, Carl, drove the Daily Star Journal's show wagon in parades and events around town in the 1950's. 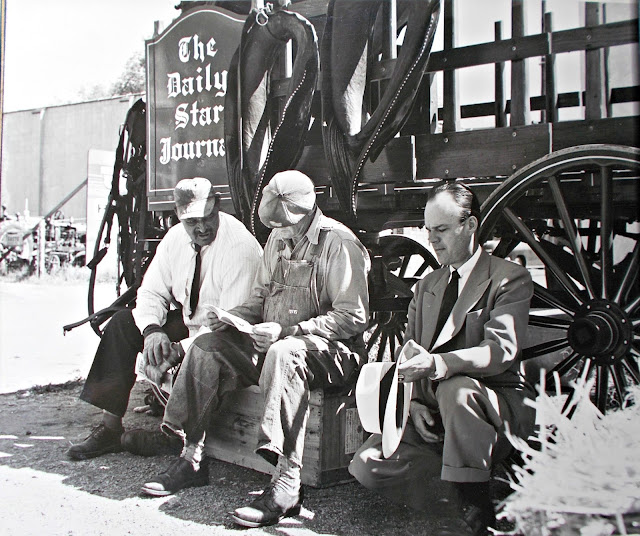 Bill Edwards, Carl Baker and William Tucker. Bill Edwards had nothing to do with the Star Journal.  He was just a friend of Carl's and was there when the picture was taken.
The picture below was taken around 1940.  Wallace Crossley gave a party every summer for members of the Star Journal Staff. This is a snapshot taken in the dark so it's somewhat blurred.  Wallace owned the old Grover house (on the site of the Warren homestead located where the post office parking lot is now.)  Smack in the middle of the picture is 16 year old Buddy Baker.  He had just been promoted from paper boy to printer's devil and was therefore eligible to go to the party.  He can't remember most of the people there, but he did recall some names. 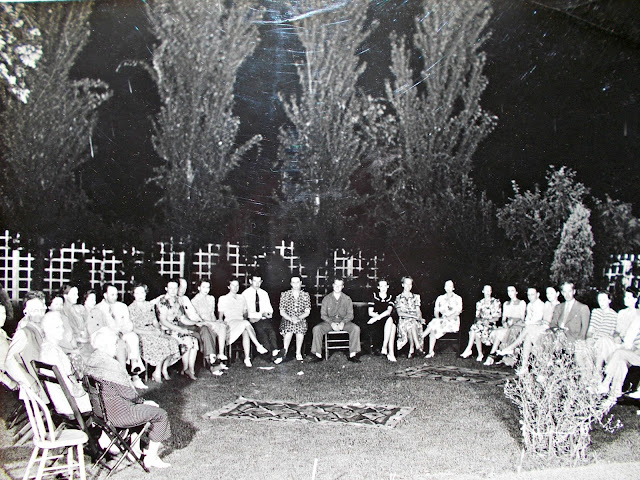 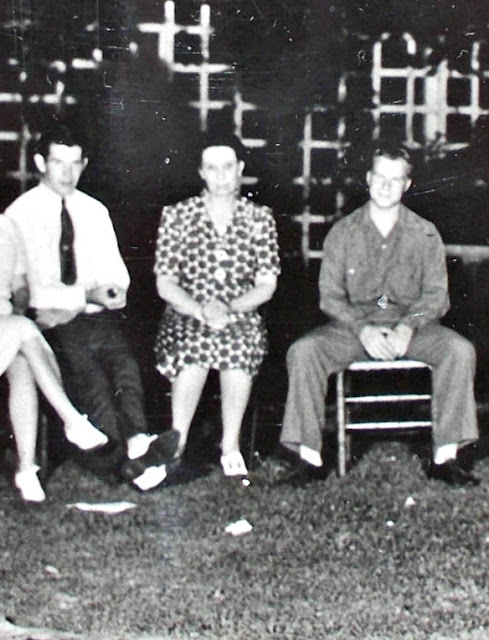 Buddy Baker remembers that the people just to his right were J.W. Parsons, (printer) and
Olive Sterne, (Receptionist). 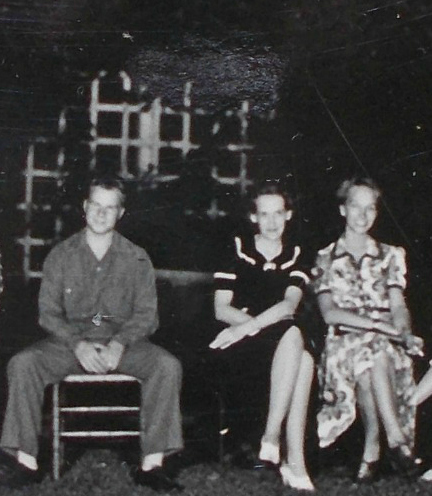 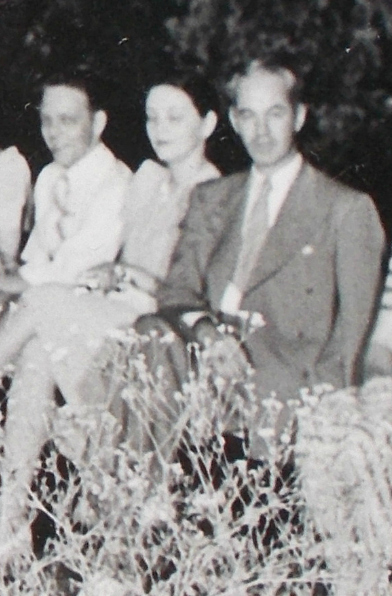 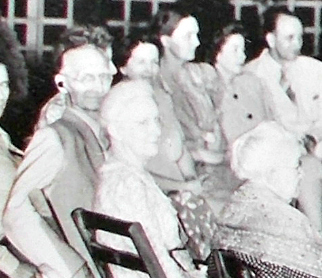 I tried to get Buddy to say that the old man with the hearing aid was Wallace Crossley but he would not confirm it.
Buddy worked for the Star Journal as a Linotype operator from  1955 to 1966 and from 1968 to 1972.