Thanks to Joan Fitterling for much of the information about her grandparents, Henry and Emma Bruch.

Henry Bruch was born in 1860 in St. Louis, Mo.  He was the son of German immigrants and grew up speaking German. His parents died in an epidemic in St. Louis,  leaving Henry and his sister, Mary,  homeless orphans. Joan did not know when this happened but a major cholera epidemic swept through that city in 1866 killing 3500 people.

Joan is not sure how long Henry and Mary survived on their own.  What she does know is that they were eventually found by a midwife named Louise Peters who brought them home to her husband Johan (Joe.) Louise and Joe raised them as their own. In spite of their English-sounding name, the Peters family also spoke German at home.  Sometime before 1878, Louise and Joe came to Warrensburg so Henry could work in the Pickel quarry.  In the late 19th century, Warrensburg's quarries employed a large number of German immigrants and German-speaking native-born citizens. It was apparently regarded as a secure source of employment. Mary stayed in St. Louis.

Henry Bruch met and married Emma Mari Niemoeller in Warrensburg.  Emma's mother, Elizabeth, had followed her husband to Warrensburg after he had left her in another town.  They quarreled and he left her again taking all of her money.  Elizabeth managed to scrape up enough money to open a boarding house on the corner of Washington and Market Street.  Her daughter, Emma had earlier left home and joined a convent, but she left the order when her mother wrote to her asking her to come to Warrensburg to help her with her new business. Emma could read and speak German better than English. Henry could read neither language.

They had four children Joe, Clem (born May 30, 1889,) Harry and Mackie (daughter). They lived on North Holden Street.  Henry continued to work in the quarry and to make ends meet, the family raised chickens.

Mackie, Joan's mother, told her children about her parents - that Henry was mean and an alcoholic while Emma was the family peace maker.  When the children grew up, Joe moved away.  He would send Mackie money to put flowers on his mother's grave but would instruct, "Don't spend a dime on flower's for Dad's grave." Mackie had only praise for her "Grandma" Peters who stayed with her adopted family for the rest of her life.  She is buried beside the Bruchs in Sunset Hills. 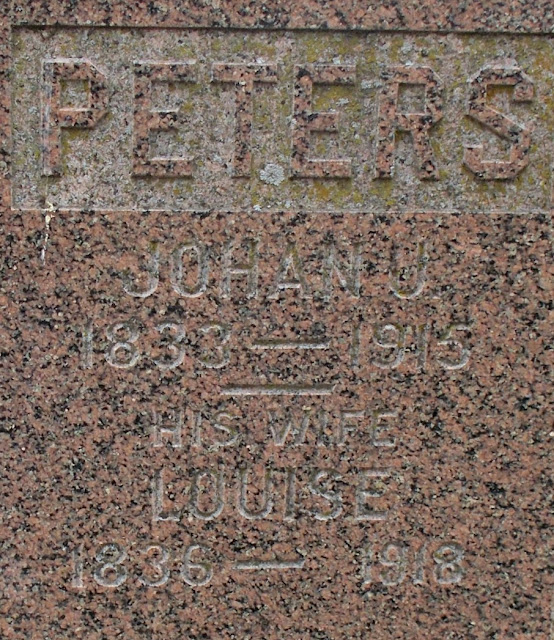 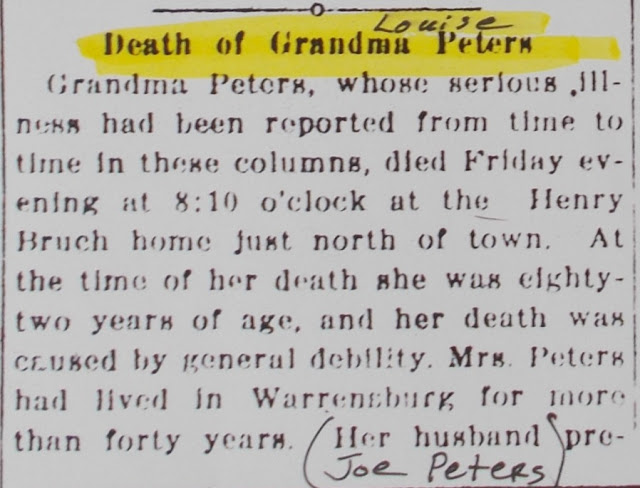 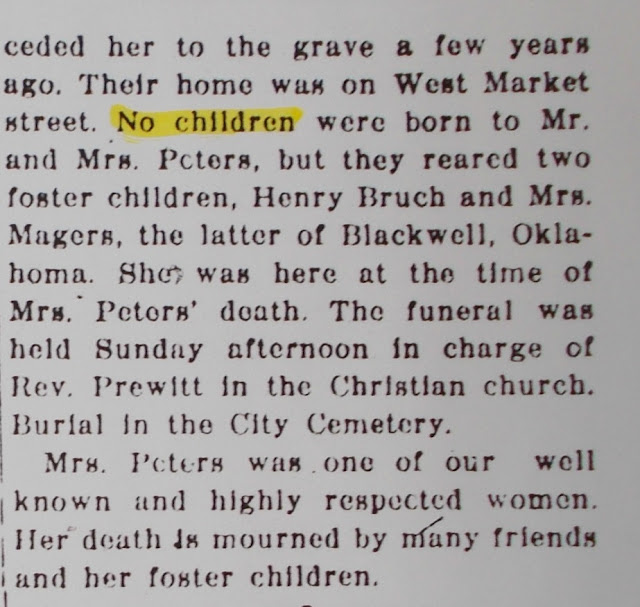 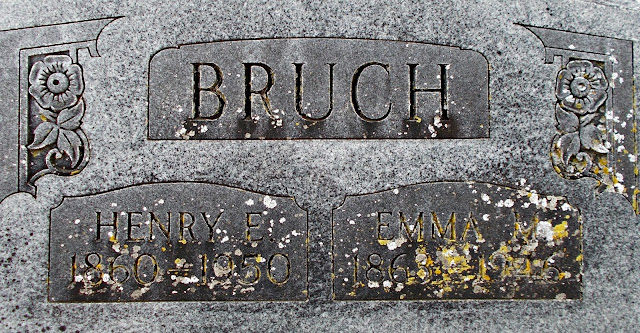 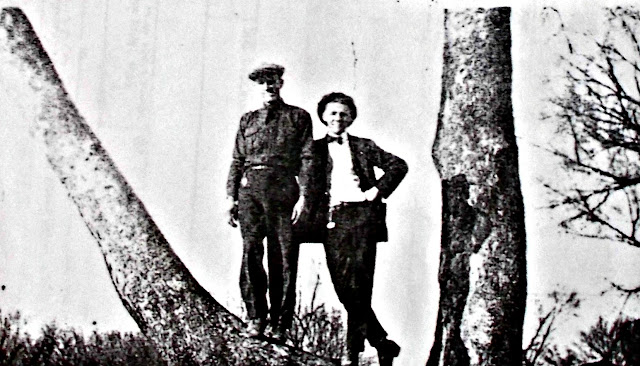 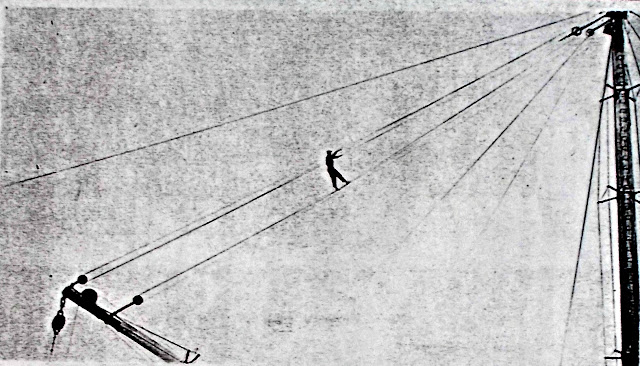 Clem Bruch climbing the guy wires up to the top of 90 foot tower of the Pickel Quarry steamshovel.
Henry's son Clem joined the Army in 1918.  It was the year that Grandma Peter's died and  that his future wife's father, Peter Theiss, was found dead in his own quarry north of town. He came back from the war to find that his intended, Mary Theiss, had gone away to business school.  She soon came back to help her widowed mother run their farm, and then, when her mother died in two years, to raise her brothers and sisters. Clem waited for her.  He was 36 and she was 33 when they finally married on June 22, 1925 a week before her 34th birthday  Clem and Mary set up housekeeping in a little house at the corner of North Warren and Russell Streets.  Clem and Mary were  members of Sacred Heart Church, and the Holy Name Society. Clem joined the Amerian Legion.

Their first child, John Francis Bruch, was born April 10, 1927. They named him after John Francis Case who was the editor of Missouri Ruralist Magazine and had written a book called, "Under the 4HFlag."  He had come to know Mary several years earlier when she was operating the Theiss family farm and had recognized her operation as exceptional.  He wrote several articles about her family in the Missouri Ruralist. Father Kennedy baptized John on May 15, 1927.

Their second child, Elizabeth Ann, was born June 26, 1929. That was the same year that Clem and Mary bought the Electric Springs property at 708 N. Warren St. at a courthouse sale.  The property had a mineral water spring on it and they sold water all over town in gallon jugs for five cents. They also had a cow or two and sold milk.  Other income came from raising frying chickens and vegetables.

At the time, the water in Warrensburg came from Pertle Springs Lake and was not safe to drink.  Two years after the Bruchs bought Electric Springs, the Christopher Family, which owned the Pertle water system, drilled wells, to provide the city with cleaner water.  This caused the Bruch Family's water business to fall off considerably.  However, many people continued buying their water for medicinal reasons until the late 1930s.

With the water business shrinking, and the depression upon them, Mary faced up to the situation with faith, reason, and determination  She said they would not lose their place, in spite of a $10,000 mortgage. With a strong faith in God and a lot of hard work, they did not. No matter how little money was coming in, Mary always put some aside for the church collection.  Family prayer by the side of the bed was a regular thing every night.

In mid 1936, Father John A. Biter became pastor of Sacred Heart.  Shortly after he arrived, John Bruch, Cleo Markley, and Shelton Bower started training to be alter boys. It took several months to learn the Latin, but they all succeeded.

Family life at Electric Springs was very difficult, but they all survived.  By this time, Clem was working as the merchant's watchman in downtown Warrensburg and this provided some cash income.  He later became a night janitor at Brookfield-Garrison Manufactering Company at West Pine Street.  This was a better job.

In the summer of 1941, John started a job as a night attendant, sleeping at Sweeney-Phillips Funeral Home.  He lived there until April 1945 when he graduated from high school and joined the Navy.

In the mid 1940s, Father Edwin M. Owens became pastor at Sacred Heart.  He was a very well-liked priest and his housekeeper was an older lady named Mrs. Kramer.  During this time, Clem and Mary's daughter, Elizabeth Ann, was beginning to think that she had a vocation. She would go to daily morning mass at Sacred Heart especially during Lent.  She would often eat breakfast with Fr. Owens and Mrs. Kramer before going to high school. Elizabeth felt they helped her make her decision.

By August of 1946, John was out of the Navy, living back at Sweeney-Phillips and enrolled at Central Missouri State.

Elizabeth graduated at the top of her class and was an outstanding basketball player. 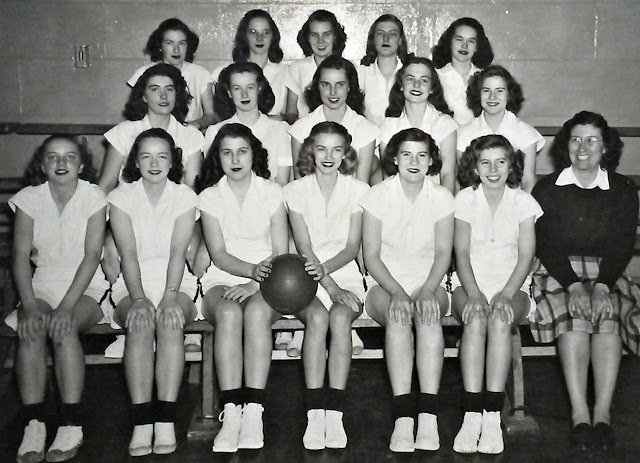 She convinced her parents to let her attend St. Mary's College at Leavenworth, Kansas in the fall of 1947. 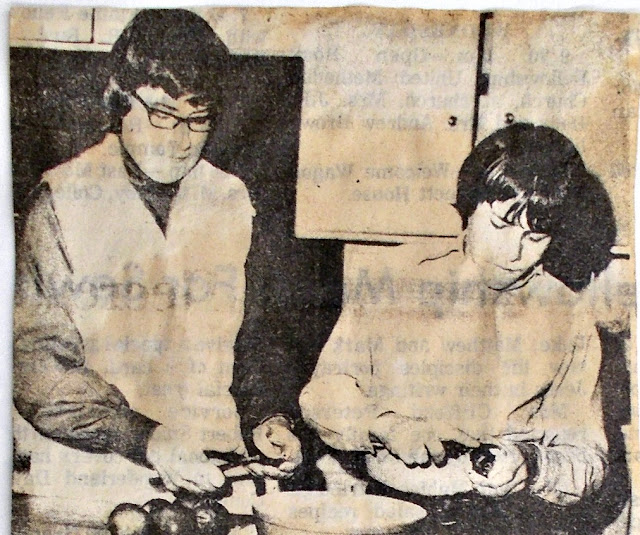 Elizabeth Bruch (left)
The first child of John and Clydines was a girl born in April 1949 and three more a boy and two girls joined the family in the next nine years.
On April the 4th, 1951, Emma married William J. McGinnis, Jr. Emma and Bill had six children.  Three boys and three girls making a total of three grandchildren for Clem and Mary.
Then Clem's brother Harry died. 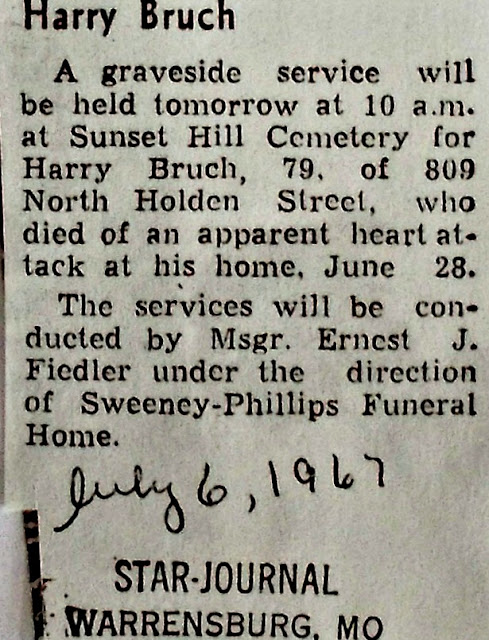 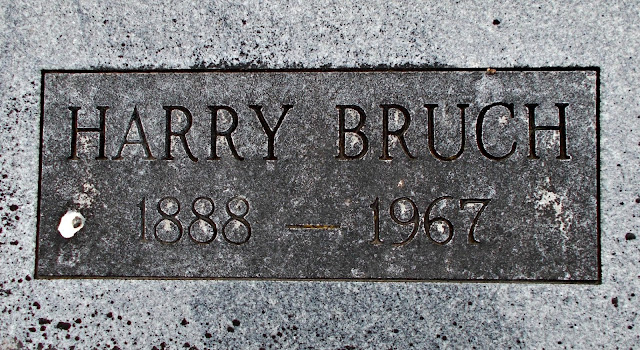 Mary (Theiss) and Clem Bruch from a Simmons Studio Portrait 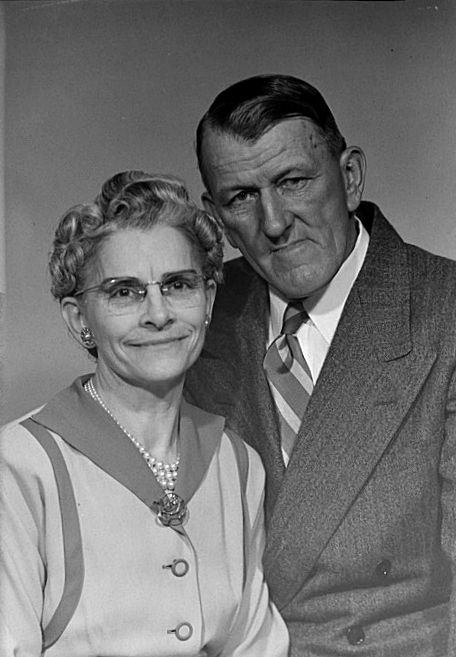 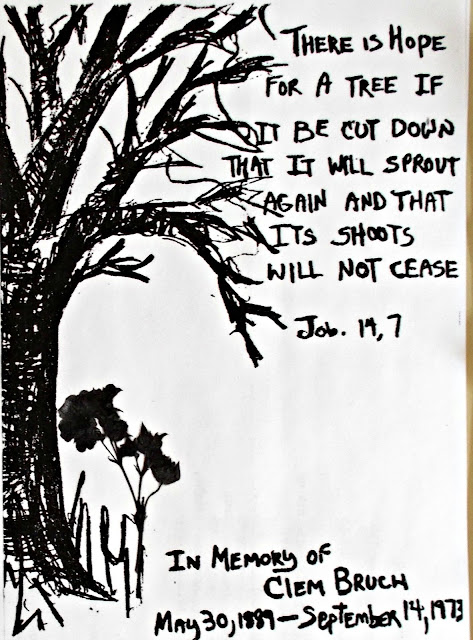 Mary lived alone and continued to attend Sacred Heart regularly until she entered a nursing home.  She died February 25, 1984 at the age of 90.  Her funeral mass was celebrated at Sacred Heart ending a long and happy association with the Parish. 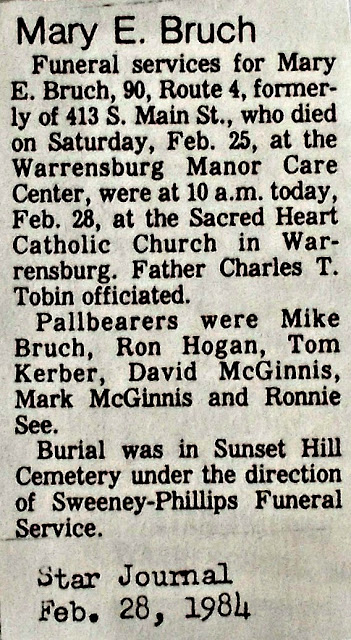 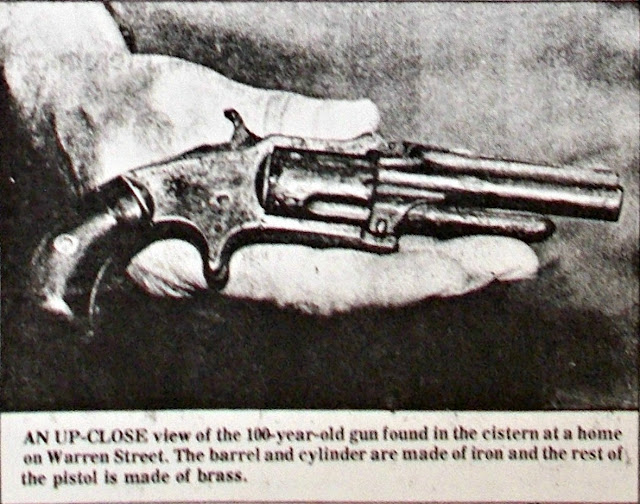 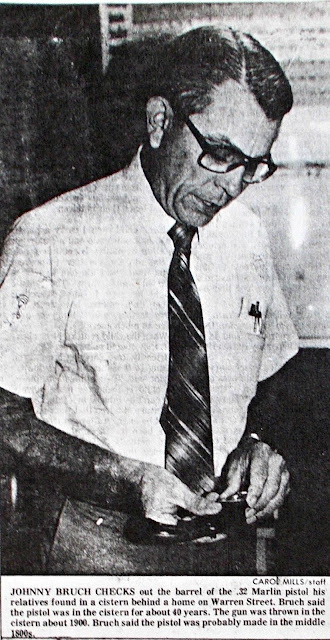 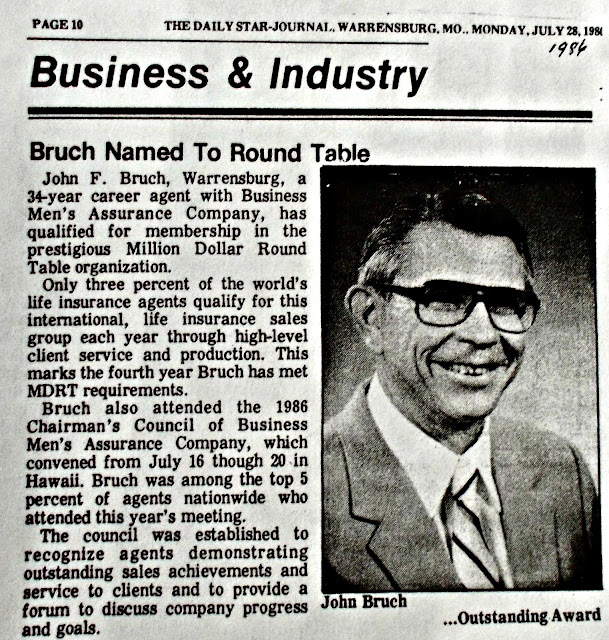