From the Rocks of Ages.
(With references to “Hiawatha” By Henry Wadsworth Longfellow (1807–1882)
A Wonderful Discovery in Warrensburg.
Yesterday morning, our curiosity led us to visit the old Indian graveyard, three miles northeast of Warrensburg, Mo., From which the Normal school boys have lately been excavating so many curious and interesting relics. At the early peep of dawn, H. C Fike, G. F. Heath and "We," were gazing inquisitively upon the venerable monuments of an extinct, rare extinct, indeed, so far as this portion of the Man's former possessions are concerned. There are three of those large mounds in this group, occupying the positions of the three corners of a triangle whose sides are fifty yards in length. They are on top of
A HIGH RIDGE
covered with a forest of large, tall saplings and now and then a large white oak or a hickory tree. The ridge rises abruptly from. Blackwater Creek, and extends southward
THE MOUNDS
are about a hundred and fifty yard from the creek. The first and largest one is at the northwest corner of the triangle. It is about thirty feet in diameter at the base, and five feet high in the centre, and is gracefully rounded off, presenting a somewhat the appearance appearance of a large potato hill. A rectangular wall of
LIMESTONE ROCK.
Was originally built on the level surface, eight feet square, and four feet high, into which the bodies of the dead were stored away, there to rest in peace until the voice of the Great Spirit should summon the painted warrior to arise and take up his march to
THE HAPPY HUNTING GROUNDS
in their blissful Ponemah (From “Hiawatha” By Henry Wadsworth Longfellow (1807–1882). After the bodies were placed in the rude tombs, the earthen mound built over it. The stone of which the tombs were made was evidently carried from the creek a hundred and fifty yards distant as that is the nearest place from which they could hare been obtained. Perhaps this laborious task was performed by the women, as they, among all
SAVAGE TRIBES,
have been made the menial servant of their "Lord and Masters," and among none more completely than with the American Indians. We were provided with picks and spade with which to resurrect the remains of the hunters and warriors who danced around their camp fires on Blackwater, perhaps three centuries ago. We were aware that the statutes of Missouri make it a misdemeanor to remove

THE REMAINS
of any human being from the place of interment, through wantonness or mischief, but, of course, we were not actuated by any such motive, and were only laboring to add to the cause of science and history. Besides, from the
APPEARANCE OF THE SKULLS
that we found, it would be very difficult to prove beyond a reasonable doubt that these were the remains of a class of mammals sufficiently developed according to the Darwinian theory to entitle them to be ranked as members of the human family. In fact we saw a bone taken out that had the perfect appearance of a short piece of the caudal appendage of an ape. My mind lent to that theory of the case in about the ration of eight to seven. There were dried up skulls and bones; arrow heads and pipes; point balls and pieces of unique pottery and a variety of beautiful stones that must have been brought from a far country.

"From where the Rappahannock sweetly sleep;
On green Virginia's breast."
THE SKULLS
were mostly in the northwest corner of the vault. There were fifteen taken from this large mound, but they had been there so long and decayed to such an extent, that none of them could be preserved in their natural condition. The place where the brains ought to be if these savages ever had any brains, was filled with dark, slimy earth, and "In these holes that the eyes were wont to inhabit, were crept, as it were,
IN SCORN Of EYES,"
the same slimy substance. Only the larger bones of the skeletons could be found. The others had all decayed. The teeth, however, were in a perfect state of preservation, and would doubtless be a valuable acquisition to the resources of some "Practical Dental Surgeon." We indulged fond hopes of finding a goodly supply of the flowing tresses of some gallant Yenadizzies's (Yenadizz From Hiawatha Poem Link By Henry Wadsworth Longfellow (1807–1882) charming Neenemoosha (means my sweetheart, my darling, my love) in this 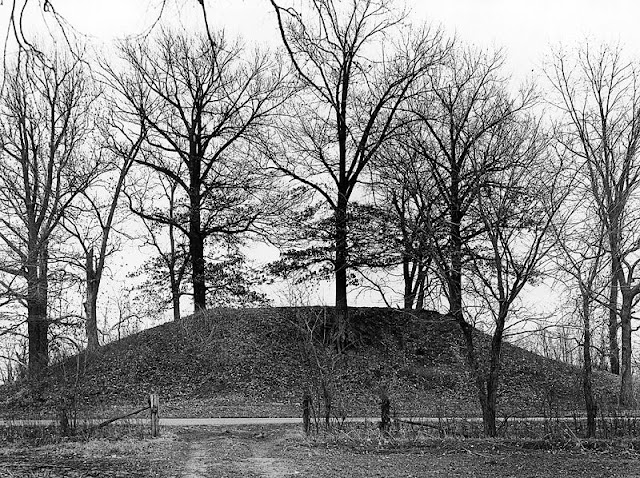 "CITY OF THE DEAD,"
it would be so valuable in these halcyon days of fashionable head dresses and ornamental ornamental wigs. But nothing of the poor Indians remained, except their bones, and to remove these from the resting place where they had been laid in the long ago, seemed a pity. We thought of the
CAMP FIRES THAT BLAZED
in the distance of the brave hearted warriors who witnessed the last sad ceremonial rites when these graves were filled while friend and relatives sobbed their sorrowful Wahonowin. (From “Hiawatha” By Henry Wadsworth Longfellow (1807–1882) But our
ROMANTIC REFLECTIONS
were changed to practical thoughts when our chief cook and bottle-washer told as he thought it was our time to "dig awhile." The mounds must have been made when the surrounding country was all a prairie, as their existence antedates the recollection of the oldest settler who can remember when the surrounding forest was only small shrubbery, the smoke pipes that were found, will, perhaps, save some young gentleman a cigar bill now and then; by the way, this is a gentle reminder of the source from which this time honored eastern was originated. Whoever smokes one of these pipes will have the consolation of knowing that he is smoking one of the
PIPES OF THE DADIES.
The discovery of these mounds aroused a good deal of latent curiosity that will not satisfied until the last one is demolished and no trace of their existence left.

1887 Book - SMITHSONIAN INSTITUTION—BUREAU OF ETHNOLOGY. BURIAL MOUNDS OF THE NORTHERN SECTIONS OF THE UNITED STATES. BY PROF. CYRUS THOMAS.


The Song of Hiawatha
1855 - by Henry Wadsworth Longfellow

From the land of the Hereafter.