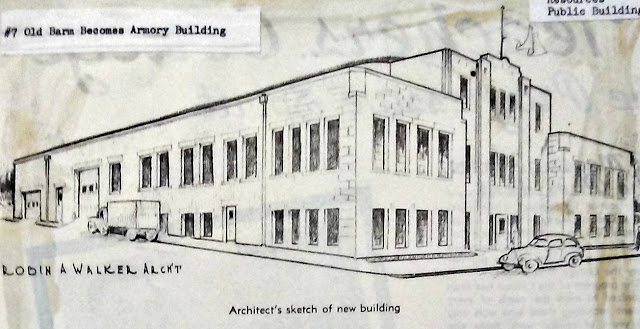 From the beginning, the county took the lead in financing the building calling on community organizations to help in the planning and fundraising.  An article dated April 22, 1937 listed other organizations who had been invited to have a member present for the general committee meeting:

County at large - County Homemaker Blubs and Johnson County Poultry Association, and the town administration of Centerview, Chilhowee, LaTour, Leeton and Kingsville.
This workig committee advised the county judges in proceeding with plans and pushing to completion a memorial to the soldiers and sailors who served in the World War from the county as well as consideration to the erection of the community building.

From the beginning, the project was a tough sell to some groups.

But most pitched in to do their part.

It provided work for county residents during the last years of the depression. 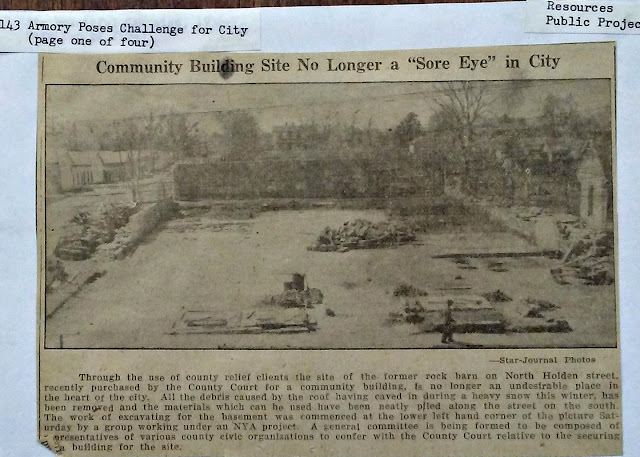 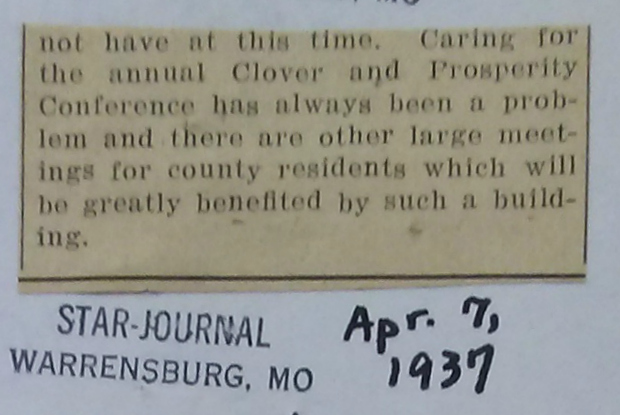 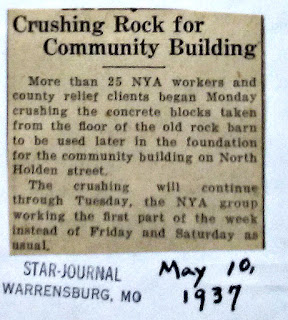 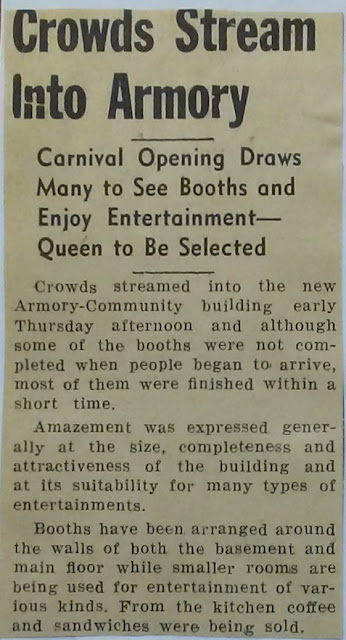 After construction began, county residents who did not live in Warrensburg grew increasingly discontented with paying taxes for a community building they felt they would not use.

However, the building was soon completed and residents from all over the county began using it for community affairs.  The "community building" became the "Warrensburg Armory" in the minds of the citizens after the attack on Pearl Harbor.

Buddy Baker remembers the fire, "Wabbit (his brother Albert Baker) was in the National Guard and they were going to annual training the next day.  So he filled all of the vehicles with gas and parked the in the basement garage  Then he took out the batteries and put them on the charging line. That's what started the fire - all of those fumes and a spark from a battery.

"I was coming back from visiting my Granddad Narron in Columbia that night and I could see a light over Warrensburg before I got to Centerview. A little closer and I could see the flames.

"I was in civil defense then, so when I got home, I put on my little hat and my badge and went to the fire.  They told me to stand on the corner where Jaeger Tires is now and keep the crowd back.  Hell, I couldn't do nothing with them people.  They wouldn't listen to me and it was hot from the fire even up there so I went home."
A newspaper article reported:


Damage estimated at $400,000 resulted last night when the Armory building, housing the Headquarters Company of the 35th Division of the Missouri National Guard and all its equipment and the Johnson County Public Library, was destroyed by a fire of undetermined origin.
Fireme using four fire trucks, two of them from the Sedalia Air Force Base, with seven fire hoses, fought the fire for four hours with the aid of 100 volunteers and saved a house on the north side of the Armory belonging to Mrs. O.J. Tapp.  The fire was first reported by Kenneth Harness of 106 West North Street, who said that, smelling smoke, he went into his back yard to investigate and saw smoke coming out all of the back windows of the Armory.

Firemen from the city fire department answere the call at 8:11 p.m. but when at 8:25 o'clock, it appeared that the blaze was getting stronger, a radio call was placed by Capt. George H. Boyd, Jr. assistant fire marshall of Sedalia Air Force Base to the base for help.  Two pumper trucks were dispatched by the base with the firemen on duty at the time.  Off-duty firemen went to the base to man the station there.
The blaze was apparently coming under control at 10:10 p.m. when it suddenly flared up as the gasoline tanks on the trucks belonging to the National Guard which were parked in the basement, blew up and set the main floor of the building ablaze.
From then on, the blaze was uncontrollable as the roof of the building caught afire and sparks began flying through the air.

Contrary to a report that was circulated last night and also was printed in a press association dispatch this morning, the building did not store any large quantities of ammunition.  According to Capt. J. C. Sutton, commanding officer of the unit, a small quantity of .22 caliber and a few rounds of .45 caliber pistol ammunition was stored in a steel-lined vault, and could not have harmed any person.
Sutton said that the wall of the vault did fall in the later stages of the fire, dumping the arms and ammunition onto the lower floor, but none was know to have gone off.
City firemen said that they saw what they thought to be magnesium flares shooting into the air but could not be sure if any ammunition went off.
17 trucks destroyed
Seventeen trucks stored in the basement of the building were destroyed.  Included were several large trucks valued at $7,000 each.  The trucks could not be gotten out because they were parked without the batteries in them according to regulations so that the batteries would not corrode.  There was not enough time to place the batteries in the trucks and drive them out, before the blaze became so strong as to make it impossible. 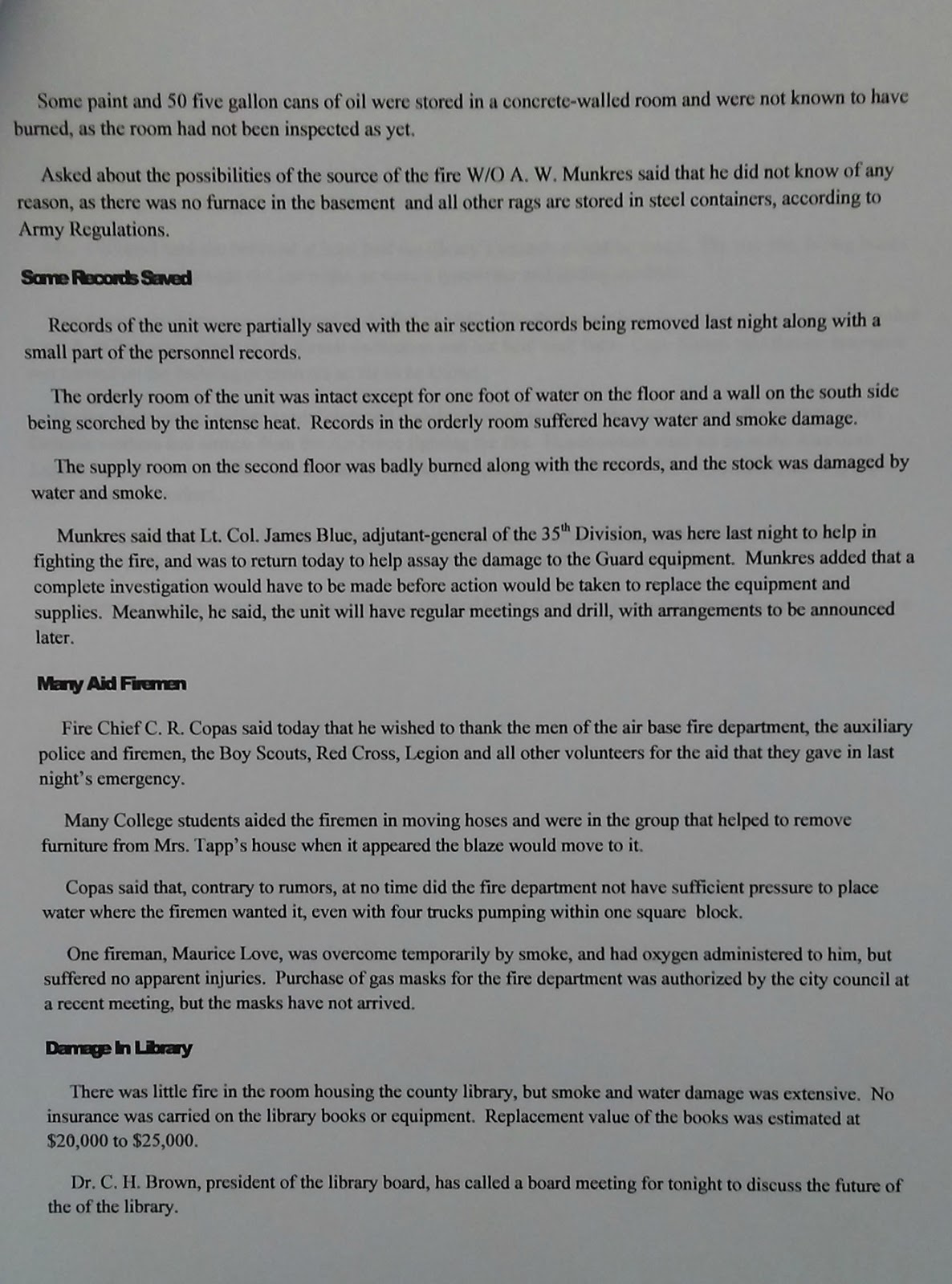 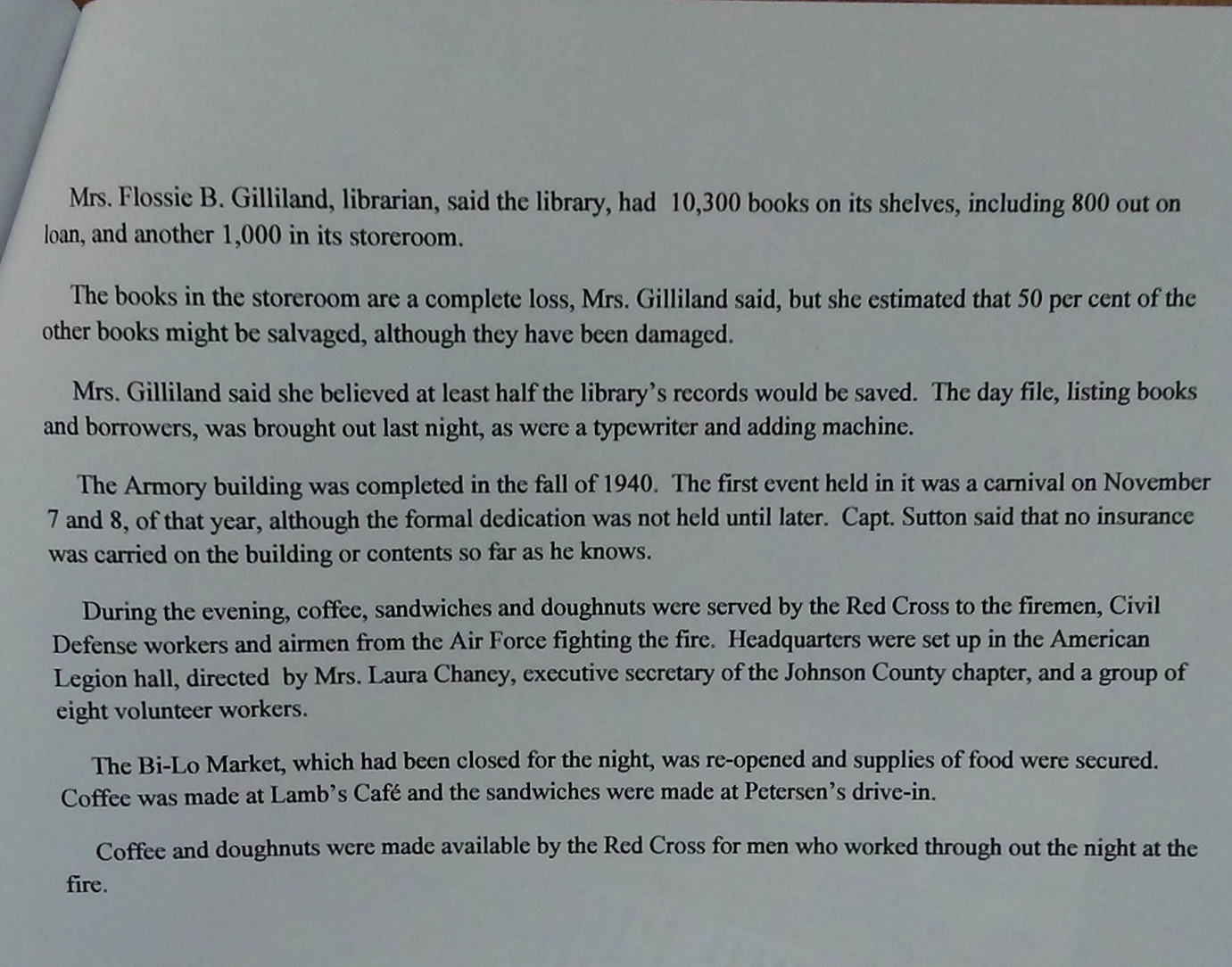