A post office called Greendoor was established in 1890, and remained in operation until 1902. The community was so named because the local post office had a green door.

Harvey Russell, born in 1834, was a Greendoor farmer--Biographical Sketch of Harvey Russell, Johnson County, Missouri, Warrensburg Township, from "History of Johnson County, Missouri," by Ewing Cockrell, Historical Publishing Company, Topeka, Cleveland, 1918.
Harvey Russell, proprietor of the "Willowdale Stock Farm" and one of Johnson County’s most noble pioneers, is, at the age of 83 years, as active and alert physically and mentally as men 25 years his junior. He was born October 22, 1834, in Montgomery county, Kentucky, son of Joseph and Elizabeth (Penn) Russell, the former, a native of Loudoun county, Virginia, and the latter, a native of Kentucky, a distant relative of the renowned William Penn, the founder of Pennsylvania. In 1856, the Russell family moved from Kentucky to Missouri, where they settled near Pleasant Hill. Joseph Russell was a teacher by profession. To Joseph and Elizabeth (Penn) Russell were born seven children: Dr. Joseph Penn, who for 40 years was engaged in the practice of medicine at Waveland, Indiana; Dr. John T., a professor in Eminence College Eminence, Kentucky; Mrs. Charlotte Berry; Mrs. Katherine Penn; Mrs. Emily Gillespie; Harvey, the subject of this review; and Mrs. Elizabeth Wherritt. Both father and mother have long since been deceased. In private schools in Kentucky, Harvey Russell received his early education. He was later a student for two years in Waveland Academy at Waveland, Indiana, Montgomery County. Mr. Russell's first business venture was at Pleasant Hill, where he and W. H. H. Gustin were in partnership in the mercantile business for 24 years, the partnership being dissolved in 1897, when Mr. Russell sold his interest in the establishment to Mr. Gustin. The store is still being conducted in Pleasant Hill, now under the firm name of Gustin & Son, their place of business today the same as when Harvey Russell and W. H. H. Gustin were partners more than a score of years ago. Leaving Pleasant Hill, Mr. Russell came to Warrensburg, where he purchased 509 acres of land located on Blackwater near Greendoor, Missouri. The tract of land has a splendid drainage ditch crossing it and on this farm, which is widely known as the "Willowdale Stock Farm," Mr. Russell was for many years engaged in raising Hereford cattle. A tenant, Mr. Miller, has occupied the place for the past thirteen years and he is engaged in general farming there. Each winter, for eight years past, Mr. and Mrs. Harvey Russell have spent in Miami, Florida, where they own a beautiful home. Mr. Russell enjoys fishing in the ocean at that place and in the winter of 1915 landed a forty-two pound fish, rivaling the celebrated Isaac Walton himself. August 29, 1907, Harvey Russell was united in marriage with Margaret Zoll, daughter of William and Sarah Martha (Alderson) Zoll, both of whom were natives of Virginia. William Zoll came to Missouri in 1857 and located at Lexington, where he remained 6 months.
From Lexington, he moved to Warrensburg and the Zoll family resided on Gay Street, which was not then a part of the city of Warrensburg. Mr. Zoll purchased the B. W. Grover farm and 23 acres of land, the latter located on the present streets of Broad and Zoll. A part of the twenty-three acres, three and three-fourths acres, now comprise the present lovely woodland home, known as "The Pines," where Mr. and Mrs. Harvey Russell reside when at home in Warrensburg. The handsome and now modern residence is surrounded by numerous, tall, stately pine trees, which were planted by William Zoll more than forty years ago. This was the Zoll homestead. 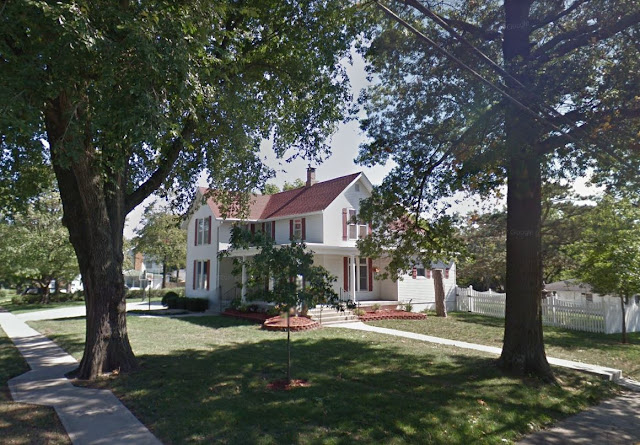 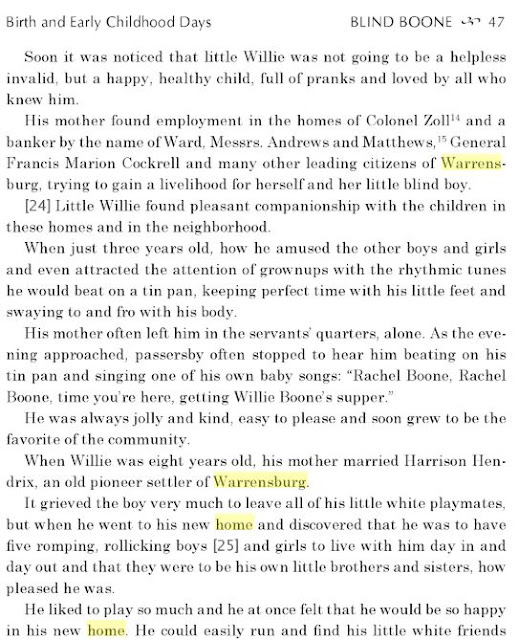 Blind Boone's Mother, housekeeper for Colonel Zoll.
Passage from "Merit, Not Sympathy Wins: The Life and Times of Blind Boone"
William Zoll was one of Warrensburg's most prominent citizens and a leading man in civic affairs. During the Civil War, he was public administrator. He and Senator Francis M. Cockrell were very dear and intimate friends and in spite of the fact that in the Civil War the two men were on opposing sides, the friendship endured the test of the bitter strife of the sixties and lasted throughout the life of William Zoll. The two friends were made Elders Emeritus of the Cumberland Presbyterian church of Warrensburg at the same time, when the union of the Cumberland and Presbyterian churches of Warrensburg occurred.
William Zoll and Edward Kelley established the Zoll & Kelley Nursery in Warrensburg in 1872 and they were associated in nursery business in this city for more than 20 years. Later, William Zoll purchased Mr. Kelley's interest and the firm became known as Zoll & Son. William and Sarah Martha (Alderson) Zoll celebrated their golden wedding anniversary at "The Pines" in 1898 and nine of the ten children born to them were present at the celebration. Their children were as follow: Allen A., whose death occurred in 1876; Charles H., formerly county engineer and surveyor of Johnson county, at present residing in Miami, Florida; Margaret, who is the wife of Harvey Russell, the subject of this review; Mrs. Flora Z. Briggs, Atchison, Kansas; Mrs. Sallie Callaway, Waverly, Missouri; Mrs. Mary Z. Doyle, Albany, Missouri; William, Jr., who was killed in 1899 in a wreck on the Missouri Pacific railway, being employed as engineer by the company; George A., who resides at Fayetteville, Arkansas; Dr. Frank C., who is engaged in the practice of medicine at Reddick, Florida; and Robert L., Miami, Florida. At the time of Mr. Zoll's death in 1908, he was the oldest Mason in years of membership in Johnson County. His death occurred at the age of 93 years, caused by a stroke of apoplexy 3 years previous. Prior to that, William Zoll was keenly alert mentally and physically very strong. He was well posted on all current events and exceptionally well informed on political subjects, in which he always took an active interest. Mrs. Zoll had preceded her husband in death many years before, her death occurring at the age of 71 years. Both father and mother were laid to rest in the cemetery at Warrensburg. Harvey Russell keeps abreast of the times and has read extensively on current topics. He is a very entertaining and gifted conversationalist.
Possessing a remarkable physical constitution, he is the equal, if not the superior, of men more than a score of years younger than he. Since he was eighty-two years of age, he has mastered the intricate machinery of an eight-cylinder Scripps Booth car and he is his own chauffeur.


Mr. and Mrs. Russell never speak of their "lost youth" or represent the period of youth as the end of happiness. Mr. Russell states emphatically that he is enjoying life more today than at any other period in his career. He believes that, as Joseph H. Choate once said in an after dinner speech, when he was 78 years old, "The happiest years of life are those between 70 and 90, and I advise you to hurry up and get there as soon as you can." A visit at the Russell home, at the beautiful "Pines," will convince anyone that it is a fallacy to lament one's lost youth. Both Mr. and Mrs. Russell are giving Johnson County a wonderful example of how to grow old, not gracefully, but triumphantly.
USGENWEB NOTICE: In keeping with our policy of providing free information on the Internet, data may be used by non-commercial entities, as long as this message remains on all copied material. Other persons or organizations may NOT reproduce these electronic pages in any format for profit or for presentation. Persons or organizations desiring to use this material for purposes other than stated above must obtain the written consent of the file contributor. This file was contributed for use in the USGenWeb Archives by: Penny Harrell Incog3678@aol.com