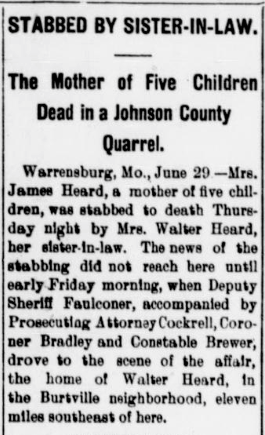 STABBED BY SISTER-IN-LAW.
The Mother of Five Children Dead in a Johnson County Quarrel.

Warrensburg, Mo., June 29 Mrs. James Heard, a mother ot five children, was stabbed to death Thursday night by Mrs. Walter Heard, her sister-in-law. The news of the stabbing did not reach here until early Friday morning, when Deputy Sheriff Faulconer, accompanied by Prosecuting Attorney Cockrell, Coroner Bradley and Constable Brewer, drove to the scene ot the affair, the home of Walter Heard, in the Burtvllle neighborhood, eleven miles southeast of here.

CAUSED BY WHISKY.
Warrensburg, Mo., June 29 The coroner's jury found that Mrs. Elizabeth Heard, who was killed at the home of her brother-in-law Walter Heard, Thursday night, came to her
death from a wound caused by a case knife in the hands of Mrs. Alta Heard. The latter, who is only 24 years old, has two children, and on this account she was permitted to give bail to her appearance at the preliminary hearing; next Tuesday.


The funeral of the dead woman was held Friday afternoon.


The coroner's inquest thought out the fact that whisky was responsible for the trouble. William Heard, who lives a few miles from the scene of the killing went to Knobnoster Thursday and brought back a gallon of whisky, his share In a shipment from Cincinnati. Other members of the family assembled at Walter Heard's and drank whisky. The women, especially, seemed to feel the effects of the liquor and when Mrs. Elizabeth Heard joined the party the bad feeling which existed between her and Alta Heard broke out in a quarrel.


Alta Heard asked her sister in law to go home The latter, who was the larger of the two, followed Mrs. Alta Heard to the house. In the meantime, Alta Heard had taken an old case knife from the kitchen.

When the quarrel was renewed at the door and Mrs. Ellzibeth Heard struck her, she sprang at her with the knife. It is remarkable that the slender wornout blade, with no handle, should have penetrated so far. It went straight to an artery aud the victim died in a few minutes. The Heard family and nearly all their relations live out In the Bristle Ridge country, a wild and sparsely settled region.

From The Nace Brothers Website several years ago, the following...
While Jimmy plays guitar, brother David plays drums and percussion.  Tim Williams, another local musician, plays bass and fiddle and the newest addition, T.J. Erhardt, is on keyboards.  All perform vocals.
Talking about a couple of the tracks, Jimmy called Miss Arzetta “good people.”  And he said as soon as they heard the tale of murder involving their grandfather’s sister, they knew it had to be turned into a song.
The story is that Lizzie Lamb and Alta Nace had married brothers named Heard.
The murder occurred one June evening two miles northeast of Burtville when Lizzie Heard was fatally stabbed with a case knife by her sister-in-law, Alta Nace Heard.
Jimmy said the rumor was that Lizzie was married to one brother and sleeping with the other.
According to the history of Burtville compiled by Mary Brown Rainey, Alta Heard was freed after the coroner’s jury ruled that Alta Nace Heard had killed the other woman in self defense.
The Burtville history states, “As well as we can learn the murder is the result of a drunken brawl.  A jug of whiskey had been received by express the day of the tragedy and the occasion was being celebrated.”
The women quarreled, the account said.  It said Alta was afraid of her sister-in-law and tried to avoid her, but the other followed her about her home and attacked her.  When Lizzie struck at Alta with an old boot, Alta reportedly struck Lizzie twice with a case knife, cutting her arm and also striking her just below the collar bone and above the rib, severing an artery.  The victim expired immediately, bleeding to death.
The account at the time said the knife hardly looked that is could be made to “do such a deed.  It is simply an old, worn case knife, worn very thing and without a handle.”
Although self-defense had been ruled by the coroner’s jury, a trial later was held and Alta Heard was acquitted.  The account said when the verdict was returned, the parents of the victim cried bitterly.
Just as it did with this story that was turned into lyrics, sometimes the music comes almost automatically.  Jimmy said they already have almost enough material for another CD.