William Perry moved from Michigan to Warrensburg in 1928 to live with his cousin, Blanche Norman and her husband C. A. Norman. He was 15 when he left his parents' home. There is no picture of him in any of Warrensburg high school yearbooks. No one living knows why his parents gave him up.

William Perry in the 1940 Census

He joined the Army in 1942 and died in the Battle of Manila in 1945.  I can find no record of a William Perry with his serial number in any Army websites.  His unit, the 264th Replacement Company, 11th Bn is not mentioned in any history of the Battle for Manila.

At the time of his death, his parents were still living. C .A. Norman submitted documents to the Johnson County court proving that Perry wanted his adopted family to inherit his wealth rather than his parents.  One of his letters home is found in the file of that court case
The First letter

(A typed transcript follows each page.) 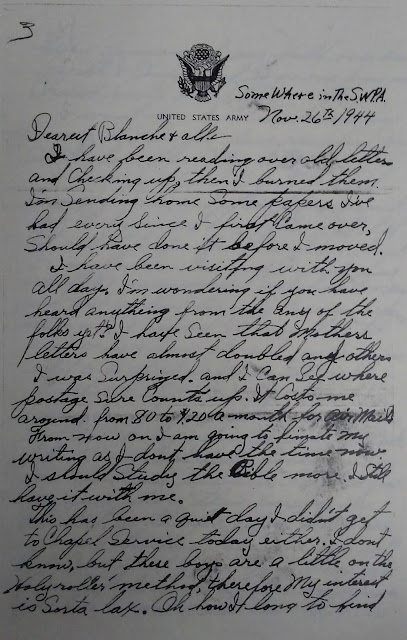 I have been reading over old letters and checking up, then I burned them.  I'm sending home some papers I've had every since I first came over.  Should have done it before I moved.
I have been visiting with you all day.  I'm wondering if you have heard anything from the any of the folks yet.I have seen that Mother's letters have almost doubled any others.
I was surprised and I can see where postage sure counts up. It costs me around from .80 to $1.20 a month for airmail. From now on I am going to limit my writing as I don't have the time now.  I should study the Bible more.  I still have it with me.
This has been a quiet day.  I didn't get to Chapel Service today, either.  I don't know but these boys are on the Holy Roller method, therefore my interest is sorta lax. Oh how I long to find 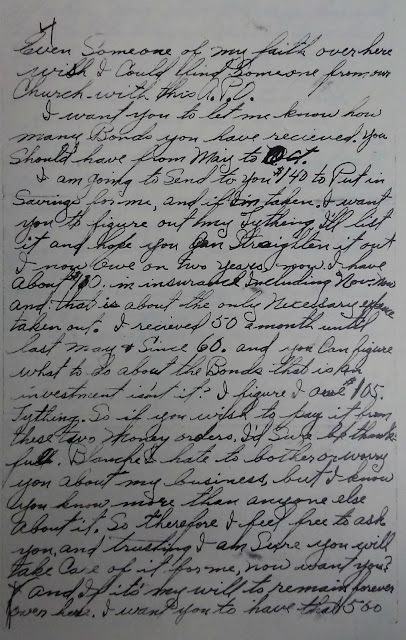 even someone of my faith over here. Wish I could find someone from our church with this A.P.O.
I want you to let me know how many Bonds you have received. You should have from May to Oct. I am going to send to you $140 to put in savings for me. And if I'm taken, I want you to figure out my tything.  I'll list it and hope you can straighten it out.  I now owe on two years, now. I have about $100. in insurance including Nov. now.  And that is about the only necessary expense taken out. I received 50 a month until last May + since, 60. and you can figure what to do about the bonds that is an investment isn't it? I figure I owe $105. tything. So if you wish to pay it from these two bonds, I'd sure be thankful.  Blanche, I hate to bother or worry you about my business, but I know you know more than anyone else about it.  So therefore, I feel free to ask you and trusting I am sure you will take care of it for me, now won't you? And if it's my will to stay over here, I want you to have that 500. 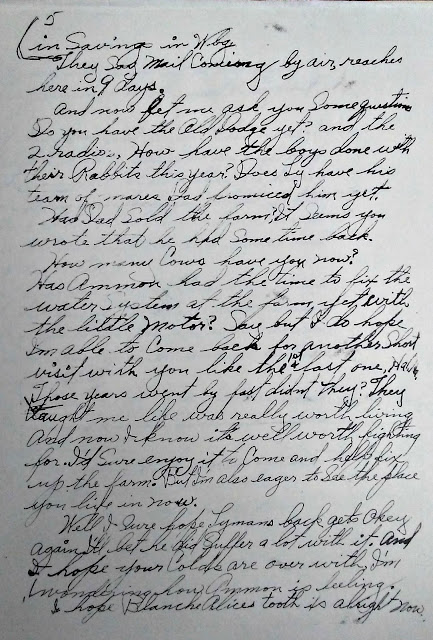 in savings in Wbg.
They say mail coming by air reaches here in 9 days.
And now let me ask you some questions.  Do you have the old Dodge yet? and the 2 radios.  How have the boys done with their rabbits this year? Does Ly have his team of mares Dad promised him yet.
Has Dad sold the farm?  It seems you wrote that he had some time back.
How many cows have you now? Has Ammon had the time to fix the water system at the farm yet with the little motor.  Say but I do hope I'm able to come back for another short visit with you like the 1st and last one, Ha! Those years went by fast didn't they? They taught me life was really worth living and now I know its well worth fighting for.  I'd sure enjoy it to come and help fix up the farm. But I'm also eager to see the place you live in now.
Well I sure hope Lymans back gets okay.  I'll bet he did suffer a lot with it. And I hope your colds are over with.  I'm wondering how Ammon is feeling.
I hope Blanch Alices tooth is alright now. 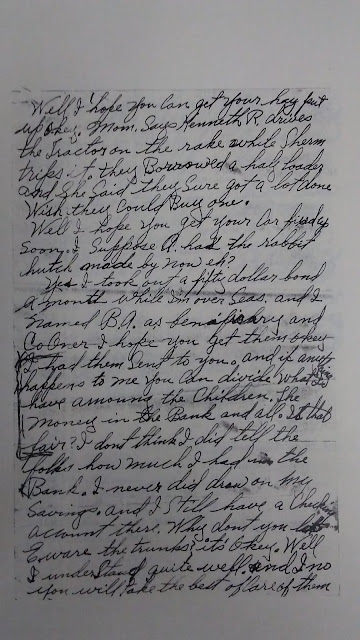 .
I hope you can get your hay put up okay.  Mom says Kenneth R. drives the tractor on the rake while Sherm trips it.  They borrowed a half loader and she said they sure got a lot done. Wish they could buy one.  Well, I hope you get your car fixed up soon.  I suppose A. has the rabbit hutch made by now, eh?
Yes, I took out a fifty dollar bond a month while I'm overseas and I named B.A. as benificary and Co oner.  I hope you get them okay.  I had them sent to you and if anything happens to me you can divide what I have among the children. The money in the bank and all.  Is that fair?  I don't think I did tell the folks how much I had in the bank.  I never did draw on my savings and I still have a checking account there. Why don't you let E. ware the trunks?  it's okey Well, I understand quite well. And I no you will take the best of care of them. 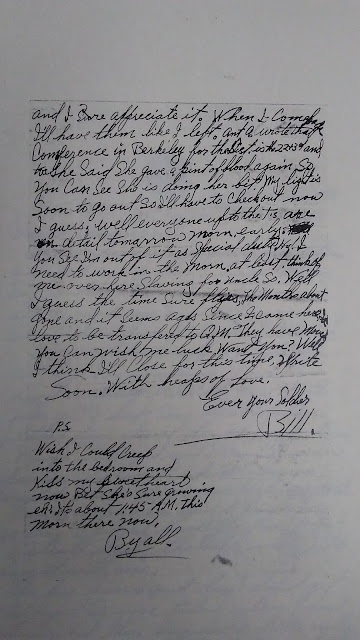 and I sure appreciate it. When I come back, I'll have them like I left.  Ant A. wrote that conference in Berkeley for the Dist. is the 22 + 3rd and too she said she gave a pint of blood again so you can see she is doing her bit.  My light is soon to go out so I'll have to check out now I guess.  Well, everyone up to the T's are on detail tomorrow morn. early.  You see I'm out of it as special duty, Ha! I need to work in the morn. at least.  Think of me over here slaving for Uncle So. Well, I guess the time sure flies. The months about gone and it seems ages since I came here.  I'd love to be transferred to QM. They have moved.  You can wish me luck won't you? Well I think I'll close for this time.  Write soon.  With heaps of love.

Wish I could creep into the bedroom and kiss my sweetheart.  Bet she's sure growing, eh? Its about 1:45 am this morn. there now.  By all

Only one page of the second letter survives: 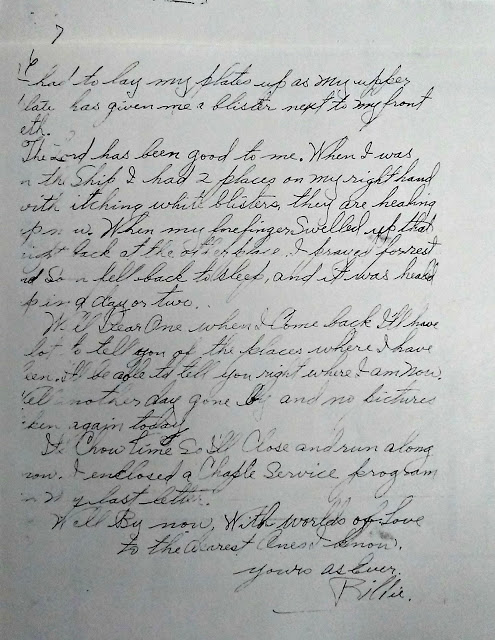 6) had to lay my plates up as my upper plate has given me a blister next to my front teeth.
The Lord has been good to me. When I was on the ship, I had two places on my right hand with itching white blisters. They are healing up now. When my forefinger swelled up that night back at the other place, I prayed for rest and soon fell back to sleep, and it was healed in a day or two.
Well Dear One when I come back I'll have a lot to tell you of the places where I have been. I'll be able to tell you right where I am now. Well another day gone by and no pictures taken again today.
Its chow time so I'll close and run along now.  I enclosed a chapel service program in my last letter.
Well by now with worlds of love to the dearest ones I know. 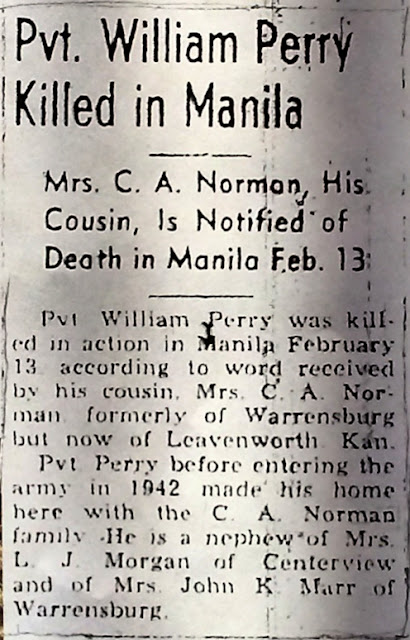 For more about Golda Marr and the John K. Marr family, see http://1973whsreunion.blogspot.com/2019/07/marr-family-david-and-cathrine-john-w.html

More of William Perry's biography is included in the case summary, but many questions are left unanswered. 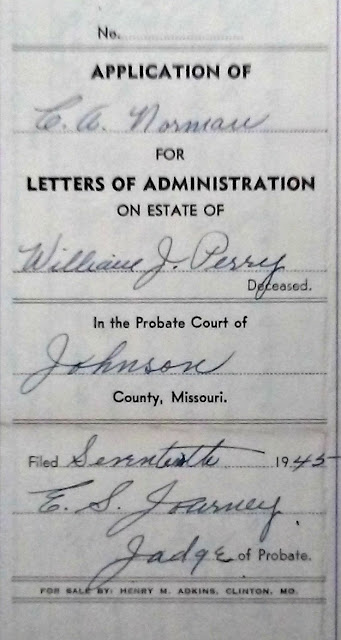 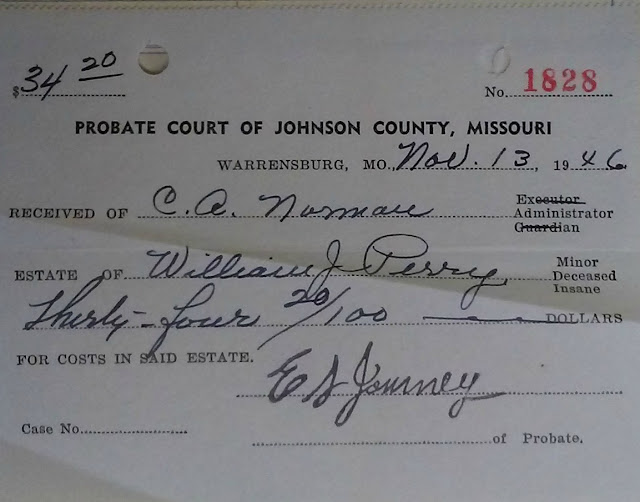 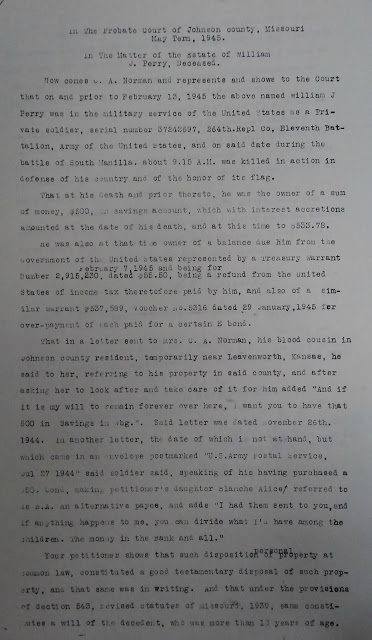 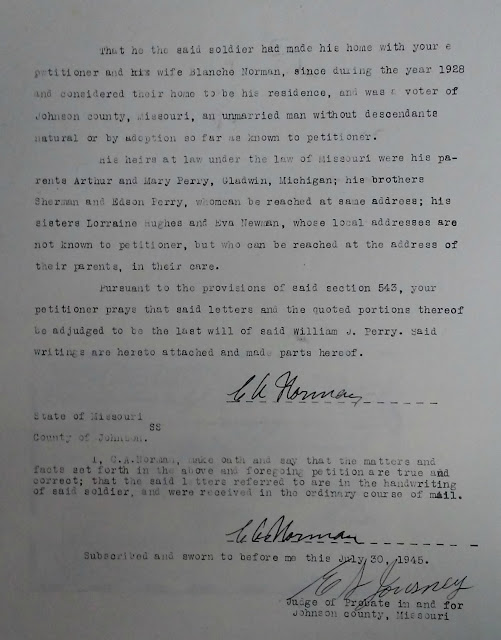 A Transcript follows this Order 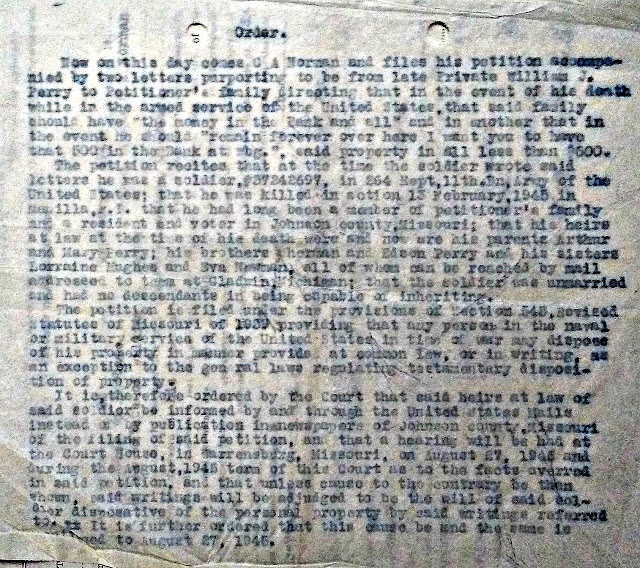 Now on this day comes C. A. Norman and files his petition accompanied by two letters purporting to be from late Private William J. Perry to petitioner's family directing that in the event of his death while in the armed service of the United States, that said family should have "the money in the bank and all" and in another that in the event he should "remain forever over here I want you to have that 500 in the bank in wbg", said property in all less than $600.
The petition recites that at the time the soldier wrote said letters, he was a soldier #37242697 in 264 Rept. 11th Bn. Army of the United States: that he was killed in action 13 February 1945 in Manila, P.I. that he had long been a member of petitioner's family and a resident and voter in Johnson County, Missouri; that his heirs at law at the time of his death were and now are his parents, Arthur and Mary Perry; his brothers Sherman and Edson Perry and his sisters Lorraine Hughes and Eva Newman, all of whom can be reached by mail addressed to them at Gladwin, Michigan; that the soldier was unmarried and had no descendants in being capable of inheriting.
The petition is filed under the provisions of section 543 revised statutes of Missouri of 1939 providing that any person in the naval or military service of the United States in time of war may dispose of his property in manner provided at common law or in writing as an exception to the general laws regulating testamentary disposition of property.
It is therefore ordered by the court that said heirs at law of said soldier be informed by and through the United States Mails instead of by publication in newspapers of Johnson County, Missouri of the filing of said petition, and that a hearing will be had at the Court House in Warrensburg, Missouri on August 27, 1945 and during the August 1945 term of this court as to the facts averred in said petition, and that unless cause to the contrary be then shown, said writings will be adjudged to be the will of said soldier dispositive of the personal property by said writings referred to. It is further ordered that this cause be and the same is (unreadable) to August 27, 1945, 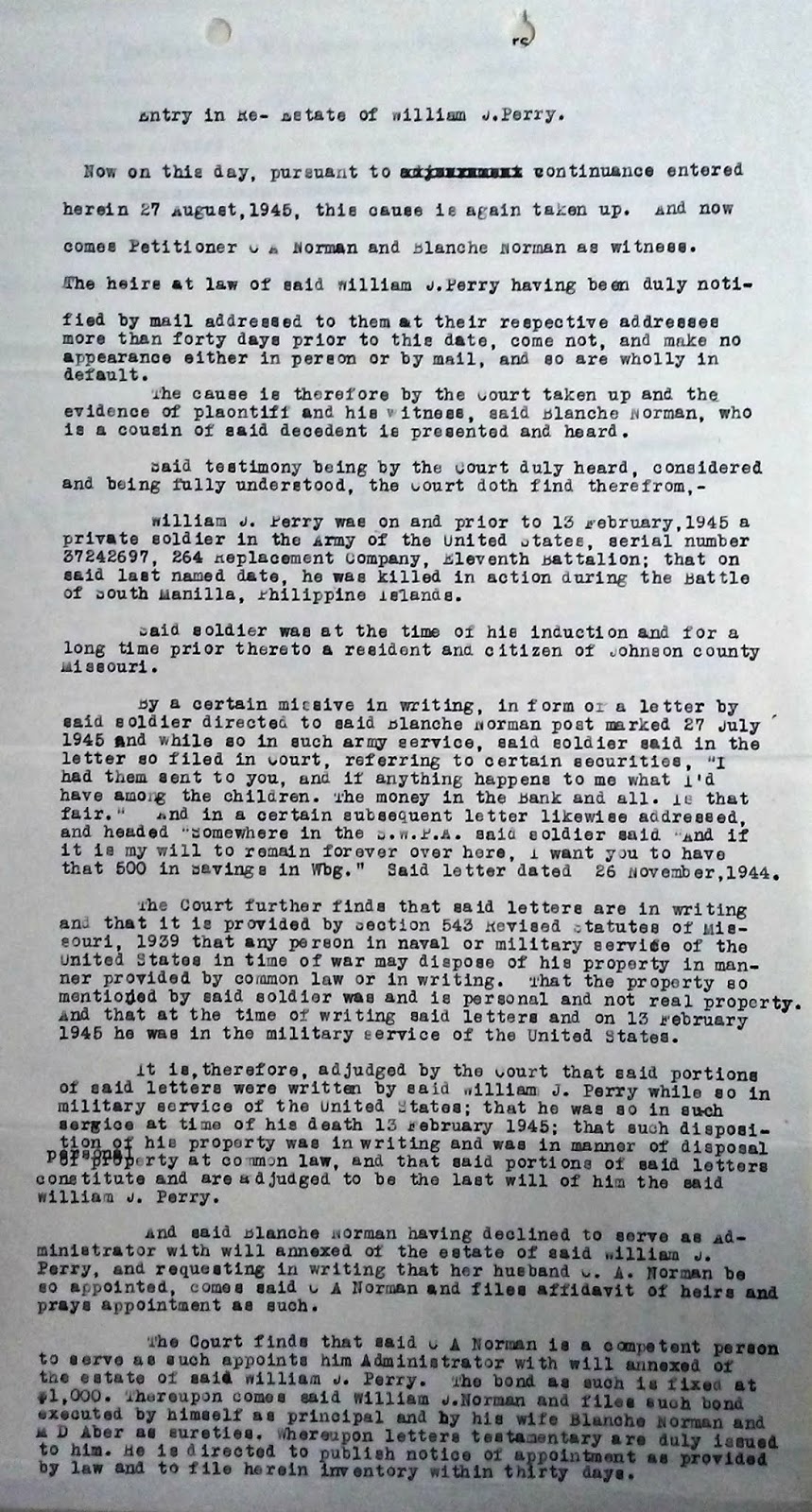 The C.A. Norman Family after the death of William J. Perry 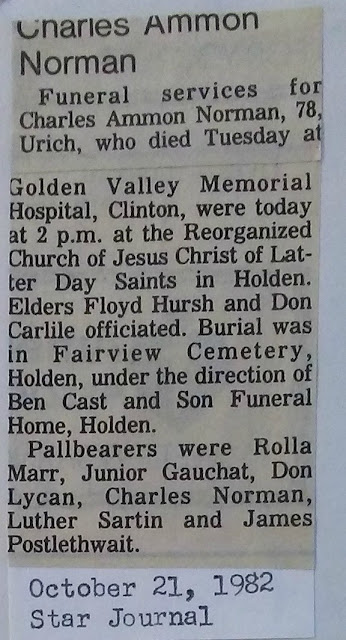 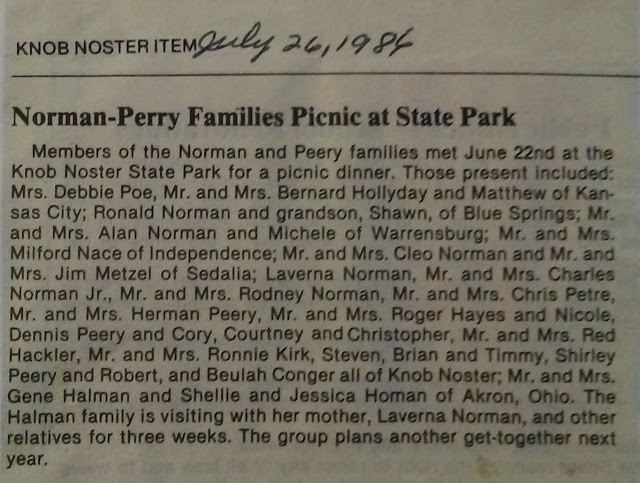 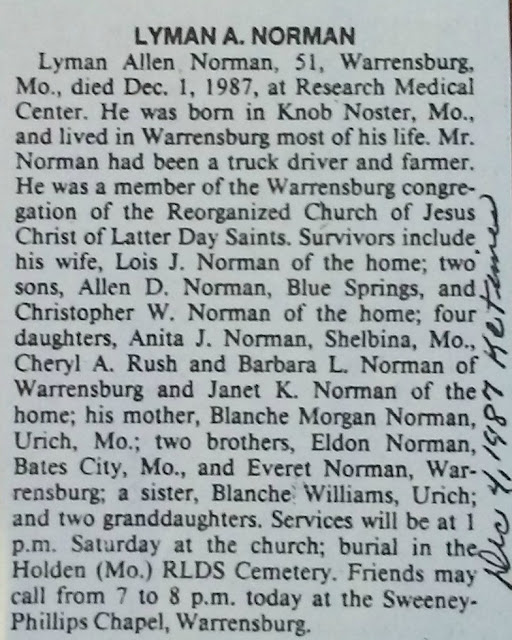 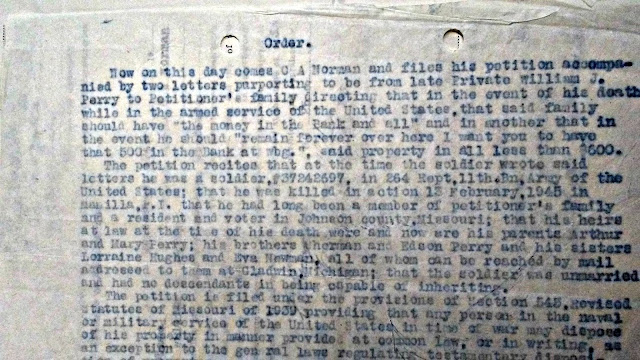 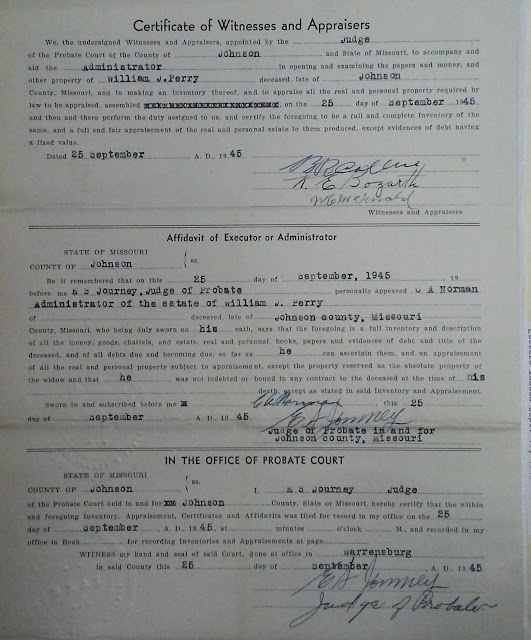 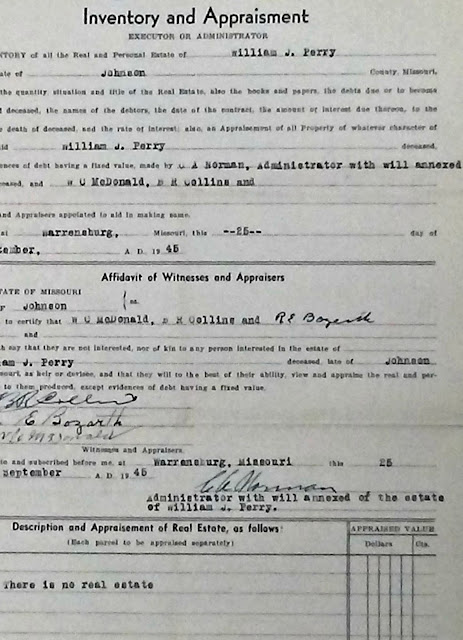 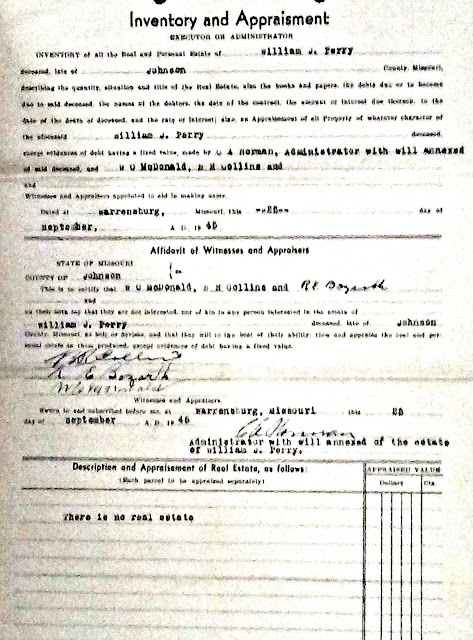 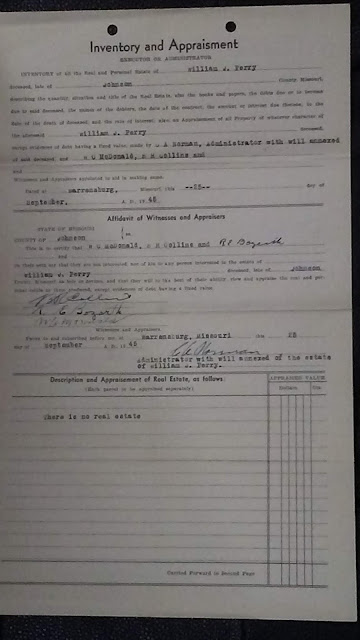 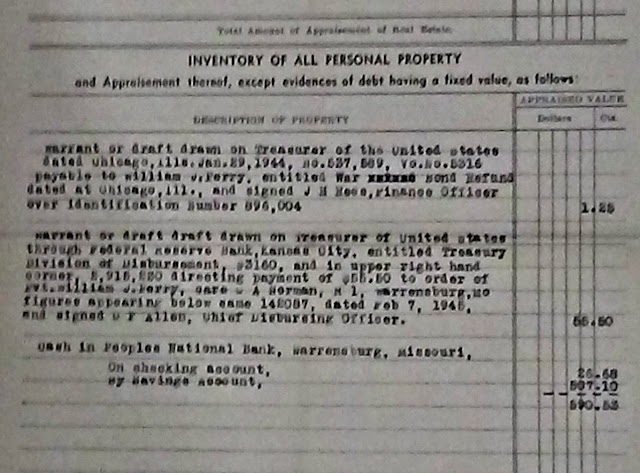 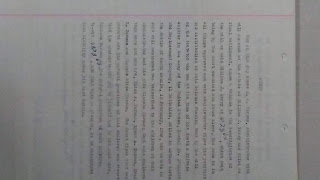 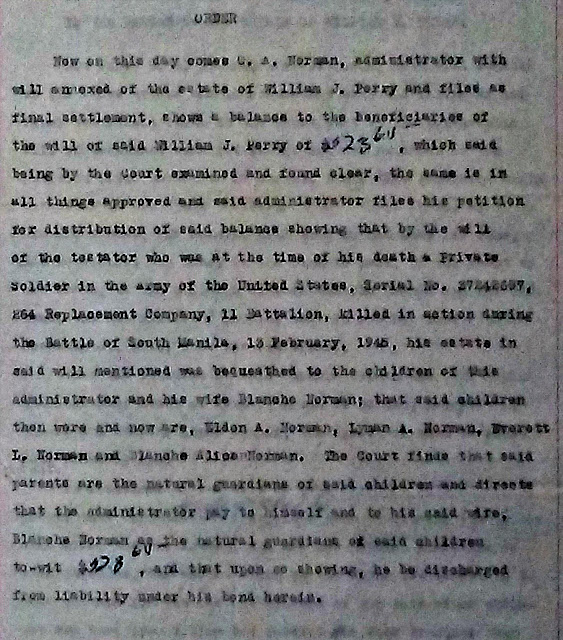 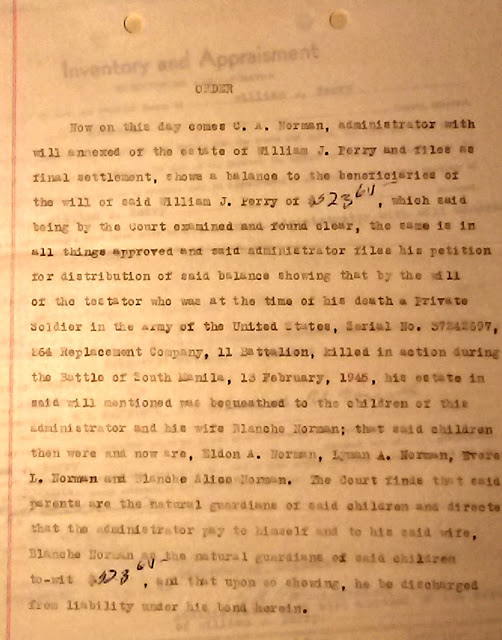 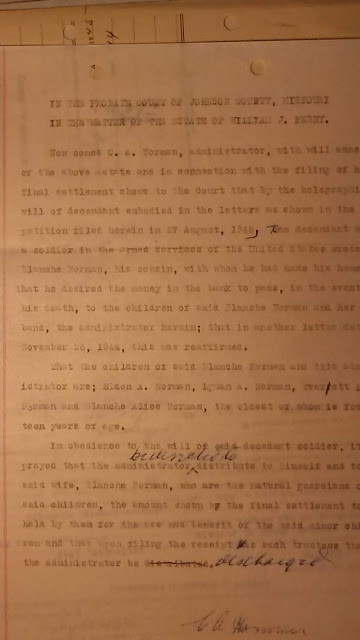 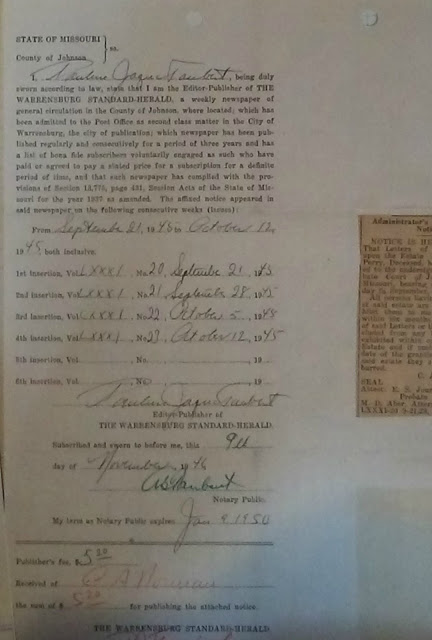 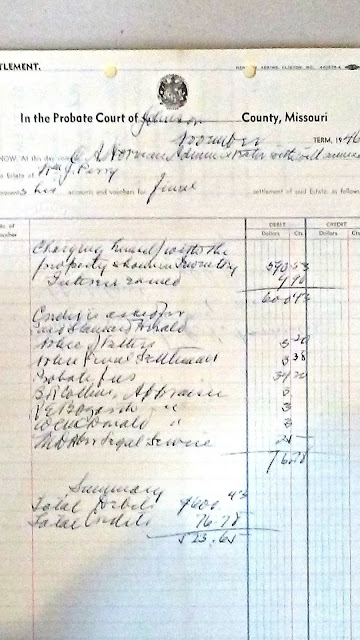