The heroism of Forrest McKeown and Bill Callaway of Holden, Missouri who gave their lives saving others in July 1965 and as recognized in the United States Congressional Record of September 1965
ed: Thanks to Patty McKeown Raker for the picture of her father and other information. 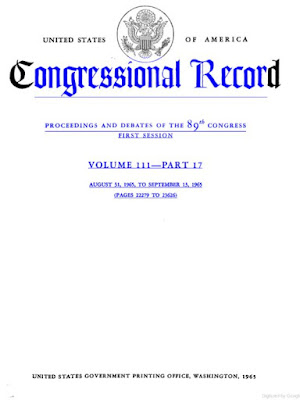 Carnegie Hero Fund Awards were awarded to the families of Forrest McKeown and Bill Callaway of Holden, Missouri for giving their lives in their heroic and successful efforts to save lives. The foundation also provided a lifetime remuneration to the widows.
22860 CONGRESSIONAL RECORD-HOUSE September 2, 1965

The SPEAKER pro tempore.John W. McCormack Under a previous order of the House, the gentleman from Missouri [Mr. WILLIAM J. RANDALL] is recognized for 15 minutes.
Mr. RANDALL. Mr. Speaker, on Monday evening, July 19, west-central and northwest Missouri were subjected to sudden flash floods resulting from almost unprecedented rainfall. In one place the fall amounted to 13 inches in a matter of hours, so heavy that it could not be recorded on a 10-inch rain gage. In our congressional district, situated in west-central Missouri, the area hardest hit was in the western portion of Johnson County, Mo., where approximately 8 inches of rain fell suddenly between about 10:30 p.m. and midnight, July 19, 1965, thus providing the setting for the enactment of one of the worst tragedies that have visited Johnson County in several decades.
The events that transpired on that long night produced two heroes who gave their lives for others and displayed repeatedly the bravery and courage of the many volunteers who fearlessly and without thought of their own safety battled the floodwaters in an effort to save five persons in peril.
Today it is my purpose to try to describe the events of that evening in sequence and to provide a summary of these two supreme acts of heroism that may be preserved as a part of the CONGRESSIONAL RECORD.
Because it is necessary to keep so many near-simultaneous events in mind when describing an evening of this kind, strict sequence or chronological order cannot be maintained at all times. My information has been assembled from eight or nine different sources in the form of correspondence forwarded to my office. I have tried faithfully to reconstruct what happened this night, based on such sources. I ask for forgiveness if I am in error for I was not an eyewitness to what happened.
Early on this ill-fated evening, Mrs. James T. Henley who lives northwest of Holden, Mo., had taken a group of young people in her car to a 4-H skating party at Warrensburg, Mo. In this group were included her two sons, Mike, age 10, and Frank, age 8, along with David Dodson, age 11, and Steven Zvacek, age 10. The rain had been very heavy while they were in Warrensburg. On the way home when she saw that the floodwaters had covered Highway 131, Mrs. Henley attempted to take a country road to their home. Although this road was partially covered with water, an effort was made to get across.
This attempt to drive through some water over a country road set into motion a chain of events that unfolded in grim sequence during the long night ahead.
Shortly after entering the water, the Henley car stalled. It was only a matter of minutes until water engulfed the automobile. At first, the children were so panic-stricken they would hardly move, but as the car began to sink into the water, Mrs. Henley managed to get the four youngsters and herself on top of the car. Fortunately, Mrs. Henley maintained the presence of mind to honk the horn of the car in an effort to call for help. She left the car lights on, hoping someone would see the light. Together, in unison, she and the young people called for help. Mrs. Henley, careful not to suggest it to her sons or their friends, soon realized that their screams for help might not be heard because of the roar of the water and the added noise produced by the heavy downpour of rain. 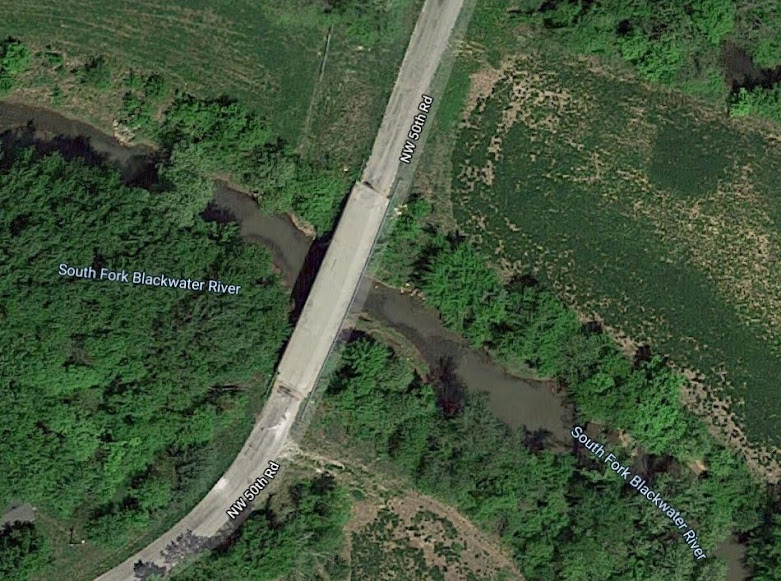 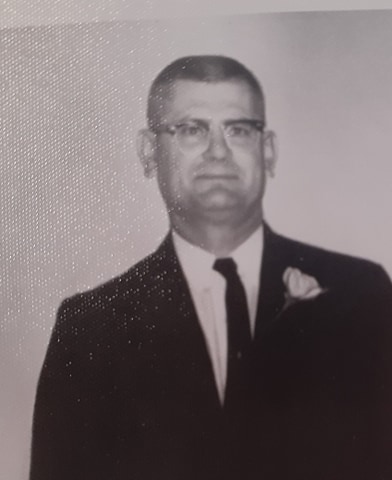 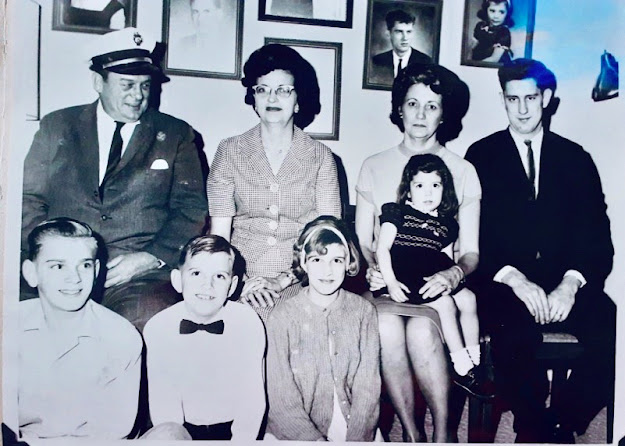 McKeown operated a body repair service and a tow service in Holden, Mo. Because it was known he had a boat he was called and immediately responded by bringing his boat to the Highway 131 bridge over Blackwater River. When Forrest McKeown arrived with his son, Ronnie, it was decided they should try to make it upstream in the main channel of the Blackwater. It was thought that somehow McKeown might be able to get upstream to rescue Callaway. At about 1:45 a.m., assisted by others, McKeown launched his boat in the swirling waters. Bystanders who knew he suffered from a heart condition urged him not to take his boat into the treacherous waters. But he shrugged off these suggestions because he felt it his duty to try to contribute his efforts to the rescue of Bill Callaway.
They had barely reached midstream in the exceedingly swift current when a floating log hit the boat and caused it to capsize only a short distance upstream from the bridge. The current swept McKeown and his son, Ronnie, back toward the bridge. The son caught on to a beam under the bridge and managed to work his way, hand-over-hand, to the bank. The father, Forrest McKeown, was swept under the bridge but was caught by the arm by L. M. Carmody and Lester Long, as he came out the other side. Moments later, the capsized boat was dashed against the bridge. For a while, McKeown was able to hold onto the hand of Cannody. Then Lester Long ran to the tow truck, yanked out a tow chain, and dropped it over to Mr. McKeown. Mr. Carmody sustained a fracture of two ribs due to the strain of trying to hold McKeown against the force of the swift current.
When the chain from the wrecker was thrown out McKeown was able to reach for and grab it. He was almost dragged out of the water through the combined efforts of Long and Carmody when he lost his hold and plunged back into the swift current. As Forrest McKeown sunk into the dreadful waters of Blackwater Creek the group on the bridge experienced that awful feeling that so many times comes to all of us--a feeling of great helplessness, a feeling of being so close to winning a victory but denied through a quirk of fate. It was an awful feeling for those who had extended such strong efforts to save McKeown and yet failed.
For those in the Vicinity of the bridge which carries Highway 131 over the Blackwater, the long night seemed to become interminable when it became known that both Callaway and McKeown had been lost. 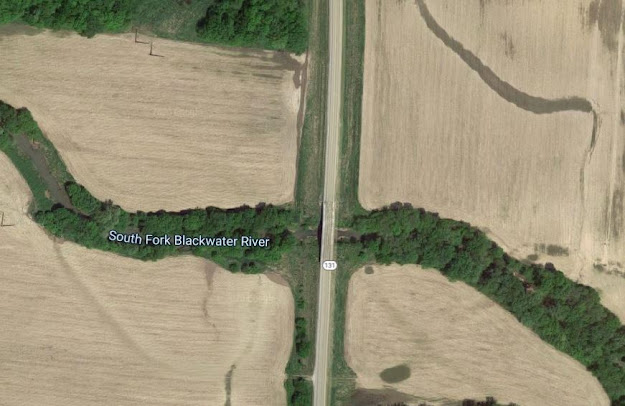 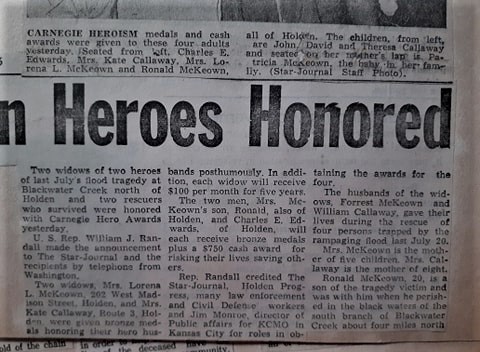 July 23, 1965
KC STAR
The bodies of the two men, found near Blackwater creek were identified as Edward Callaway, 40 and Forrest McKeown, 50. Both were men of Holden, Missouri. The victims were would-be rescuers who disappeared after helping persons trapped in a car, Monday night near Holden, Missouri.
Michael Henley, 11, of Holden, Missouri was swept away in the same flooding Blackwater creek, in the same incident that claimed the lives of Edward Callaway and Forrest McKeown. Edward Callaway and Forrest McKeown, both of Holden, Missouri were in boats which capsized in the attempt to rescue the Henley boy.
At Holden, about 100 persons search the receding waters of Blackwater creek yesterday without finding any trace of two men presumably drowned while attempting to save a family. The men, Edward Calloway, about 50, a farmer and Forrest McKeown, 51, who operated towing service, disappeared into the swollen creek waters at separate places near Holden in rescue efforts.
Callaway helped rescue Mrs. James T Henley and her four children, who were stranded on a bridge in a car over the creek about three and a half miles north of Holden, Missouri. When the rescue boat capsized, Callaway supported four persons against a tree for more than an hour until they were rescued, but he was swept away by the swift current before he himself could be saved. Michael Henley, 11, also was swept away. His body was recovered later.
McKeown apparently drowned when his boat, in which he was searching for Callaway and the Henley boy, overturned when it struck a tree.
Article from the Kansas City Star on July 21, 1965.