Actor with the Character of Charlie Chan born in Warrensburg, Sidney Toler 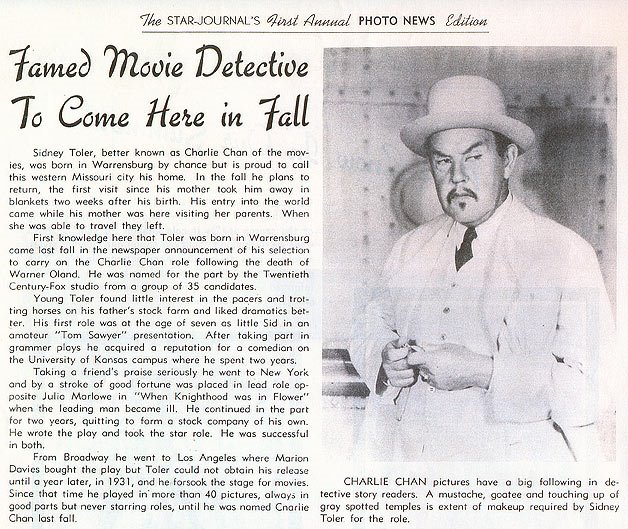 Hooper G. Toler Jr., who was called Sidney Toler from childhood, was born April 28, 1874, in Warrensburg, Missouri. He showed an early interest in the theater, acting in an amateur production of Tom Sawyer at the age of seven.He left the University of Kansas and became a professional actor in 1892, playing the heavy in a performance of a melodrama called The Master Man in Kansas City. In 1894 he joined the Corse Payton company and toured for four years. His success in leading roles at the Lee Avenue Academy in Brooklyn brought an invitation to join the company of Julia Marlowe. He toured with her for two years, playing the Duke of Buckingham in When Knighthood Was in Flower.
In Brooklyn, Toler played leads with the Columbia Theatre Stock Company and sang baritone with the Orpheum Theatre's operatic stock company. In 1903 he made his Broadway debut in the musical comedy, The Office Boy.
Over the next nine years Toler had his own theatre companies in Portland, Maine, and Halifax, Nova Scotia—at one point having 12 stock companies on the road. He began a prolific career as a playwright, writing The Belle of Richmond, The Dancing Master, The House on the Sands and more than 70 other plays. One particular success was a war play called The Man They Left Behind, which was presented by 67 companies in a period of three months and by 18 different companies in a single week.
In 1921 Paramount Pictures released two films based on Toler's plays: The Bait, adapted from The Tiger Lady, and, based on Agatha's Aunt, which Toler adapted from a novel by Harriet Lummis Smith. Three of his plays reached Broadway: The Golden Days (1921), which starred Helen Hayes, The Exile (1923), and Ritzy (1930).
Toler earned fame as an actor on the Broadway stage, working for David Belasco for 14 years. He was best known for his comedy roles, from the detective-butler in On the Hiring Line (1919)—a performance that The New York Times called "one of the comedy high spots of the week"—to Cool Kelly the iceman in It's a Wise Child (1929–30).
In 1929 Toler made his first film, Madame X , and in 1931, after the Boston run of It's a Wise Child, he moved to Hollywood. He played supporting roles in films including White Shoulders (1931), Tom Brown of Culver (1932), Blonde Venus (1932), The Phantom President (1932), The World Changes (1933), Spitfire (1934), Operator 13 (1934), The Call of the Wild (1935), Three Godfathers (1936), The Gorgeous Hussy (1936), Double Wedding (1937), The Mysterious Rider (1938) and Law of the Pampas (1939).