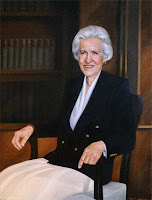 Madam Speaker, it is with sorrow that I inform the House of the death of Mrs. Avis Green Tucker, a distinguished Missouri citizen from Warrensburg, in the 4th Congressional District. Avis Green Tucker was not just my own long-time friend. She was one of Missouri's most highly respected newspaper publishers. She was a willing volunteer frequently called to important service by Missouri governors from both political parties. And she was a particularly inspiring role model among women leaders in our state.
Avis and her husband, William Tucker, bought the Daily Star-Journal in 1947 and the paper stayed in the Tucker family for some 60 years, until its sale in 2007 to another distinguished Missouri newspaper family, the Bradleys of St. Joseph. Bill Tucker was serving as publisher in Warrensburg when he died of a heart attack in 1966. Avis took over as one of the few female daily newspaper publishers in the Midwest. She once said: ``I decided I was going to run this paper. I was going to try. I told everyone that I had more nerve than ability, which was the truth.'' But that was a typically reticent and humble statement from a woman whose abilities were quite remarkable. Those abilities were widely recognized. In 1982, Avis became the first female president of the Missouri Press Association. That was just one of many ``firsts'' achieved by Avis Tucker, including serving as the first female president of the Missouri Associated Dailies organization, and becoming the first woman inducted into the Missouri Press Association Hall of Fame. She received the National Newspaper Association's McKinney Award, given to a woman who ``exhibited distinguished service to the community press.'' Just this past May, Avis became chair emeritus of the Missouri Press Association's Foundation Board, which she helped found and fund.
She served not only as one of the state's rare female publishers, but in other leadership roles, particularly at our mutual alma mater, the University of Missouri. Mizzou's world-famous School of Journalism honored her with its Honor Medal in 1976. And in 1972, Avis became the first woman president of the University of Missouri's governing body, the Board of Curators. Her service as a curator has particular significance for me, since she was appointed to succeed her late husband as a curator upon his death. And Bill Tucker had been appointed to succeed my father, Isaac Newton Skelton III, upon his passing. In Missouri, one of the highest honors one can achieve is being named to help guide our land-grant state university, and this is an honor that has been treasured by both the Skelton and Tucker families.
Avis Green Tucker will be remembered fondly by all who had the privilege of knowing her, including me. When she passed away at age 95 on Friday, December 17th, 2010, she had lived a life that was exemplary. Her leadership was superb, her newspaper's readers and her community were well-served, and her place in Missouri journalism and public service is secure. Avis is survived by two nephews, Bob and Richard Green. I know members of the Congress will join me in paying tribute to the life, achievements and service of Avis Green Tucker, and in extending our condolences to her family and friends.

Established in 1968 to recognize extraordinary service to and support of The State Historical Society of Missouri, the Distinguished Service Award has honored officers, trustees, volunteers, and staff members. It is the highest honor bestowed by the Society.