Unforgettable People and Places of Warrensburg 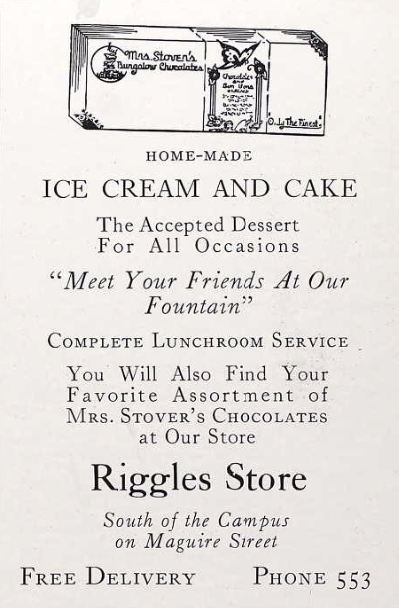 Perhaps the most famous, and most often remembered, restaurant was Riggle's, located directly across from the campus on Maguire Street in the area once known as Buentetown. Later known as the Campus Inn, it served students for more than 30 years while others came and went along the same block of businesses.
Although Buentetown, known to a later generation of students as the College Plaza, is gone, one building still stands. The old Buente grocery store, which for many years also was Ike Martin's music store, now houses Planet Sub.

One of the first franchised restaurants to arrive in Warrensburg was the Dog 'n Suds Drive In east of Maguire Street on Business Highway 50. A Pizza Hut® later was built at the same location, it now is the site of Walgreens. Sonic® appeared in Warrensburg in the 1960s, only to disappear for a decade or so during the 1980s. It reappeared in the same location, where it remains today, serving another generation of UCM students.

Before long, the Warrensburg business community grew to accommodate more of these restaurants. Commonly known as "drive-ins" because of the convenience of ordering from the car, they eventually became known as "fast food" restaurants because of the speed of service. Many of these franchise operations, such as Ku Ku and Mister S, are part of the local lore. Others, like McDonald's®, Burger King® and Wendy's® still compete with local establishments.

Pizza always has been popular, beginning with the Village Inn Pizza Parlor on South Maguire. Its location across from what once was the Campus Movie Theaters made it a popular place. Its location close to campus also made it popular for a variety of restaurants over the years.

What about that pizza place on the south side of town? I remember having my first taco pizza there in 1982.

Webb's cafe was on the corner of Business 50 & Washington. There was an A & W Root Beer before Dog N' Suds located approximately where Burger King is. And for the best Bar-B-Que every served in Warrensburg it was Breeze Inn.

Great article but I believe you meant Walker's Cafe, not Wilson's Cafe. I don't remember Wilson's but Walker's was downtown on the corner a block from the Courthouse. I also remember Milburn's. Thanks for the memories.

What about Taco Tico?

Nobody writes about Barney's. That was the favorite dancing place in the early '70s. Shree Loya

I proposed to my wife at Riggles and worked at Peterson's Drive-in and Ball's Cafe. I also spent a lot of time in Ma Browns.

Lamb's Cafe was my favorite. Open most hours of the night and later when it moved on the north side of Bus. 50 24 hour service, it was the favorite place to get coffee. Theirs was the first in Warrensburg to install a filter on the water and remove the "bad" taste from the local water, making the coffee the best in town.

How about the "TOP HAT" on Highway 50 east; Anderson's at the old hotel on South Holden, just up the hill on south side of the railroad station; Mother Brown's Tipsy Tea Room and last but not least Lambs at the junction of Highway 13 and 50.

This was a wonderful trip down memory lane, thinking about Hart's Cafe with its wooden booths, and, if I recall correctly, the Mule head at the door (not a real one of course). There was in the 1970s a great tea joint downtown, where I had my first plate of spaghetti. But let's talk about the BARS: The Granary, the Library. Dr. John singing "Right Place, Wrong Time" while a patron streaked the place. Some great Thursday evenings spent downtown.

Joe's, home of the Warrensburger, is missing!

How about the Warrensburger, Tim's Pizza, and the Tee Haus?

How about the "Q and S (Quality & Service) Bar," fondly known as "Ma Brown's." Laura Brown had cheese and crackers for a dime and Stag beer for 15 cents.

My favorite was a coffee house downtown that served flaming sundaes and great deli sandwiches with carrot cake. This was during the late 70s and early 80s.

I agree with the remarks about Walkers. Walkers fed me for several years while attending "Central Missouri State University" as it was known back then.

In the late 1950s, the Tip-Top Cafe served those fabulous half-moon shaped fried pies topped with ice cream. It still makes my mouth water to think about it after 50 years.

And, the West Pine Cafe, The Plaza Creme, the fountain at Buente Bros. Drug at Pine & Holden, and Coleman's store in the basement of the house at College & South.

I don't see The Bungalow listed. I'm not sure which one, but someone had fried pies for a nickel.

I would also add Walker's Cafe downtown, and Milburn's Drive-in at Young & Maguire. All and all, you did a terrific job

I remember a dish from Riggles:
Cut sausage into discs and saute' till hard. Then braise in marinara, and serve over spaghetti.

My first beer at the Burg was at Moon's Last Draw (south side of the square). Will never forget it and also having the best chili of my life at Warren's Tavern. If you guessing I was a TEKE, your're right.

A comprehensive tour de force of Warrensburg degustation (an admitted oxymoron), though the best food in town was always home-cooked (usually in someone else's home, of course.). Earliest memory of 'burg drive-in chow is the tasty thick fries at the car-hopped place at corner of 13/Maguire and Business 50 now (or at least upon last visit) occupied by a Hardee's.

A comprehensive tour de force of Warrensburg degustation (an admitted oxymoron), though the best food in town was always home-cooked (usually in someone else's home, of course.). Earliest memory of 'burg drive-in chow is the tasty thick fries at the car-hopped place at corner of 13/Maguire and Business 50 now (or at least upon last visit) occupied by a Hardee's.

Was the Milburn's Drive in? the first one in Warrensburg. Mister S, Dog N'Suds came along later but they were good as well!

I have to agree with the person who noted that Wilson's out on Hwy. 50 had the best Bs 'n' Gs. It was THE go-to-place in the early/mid 80's for us college kids after long night of having, um, too much fun. Friendly service, hot coffee and a delicious serving of Bs 'n' Gs - that was Wilson's and we loved it.

Where was the community center in Warrensburg before it's present location? In the late 80's or early 90's

I guess I am dating myself but does anyone remember the Abode with the swimming pool down the street from Checker Tavern. Or what about the White Lion? Two great places when I was growing up in the burg.

Yes, I remember Roy Kaufmann(spelling) and his Pizza House and Abode, the fluorescent painted wall with blacklight of Warrensburg and his swimming club. Roy was a great guy. I remember the White Lion but never frequented the bar on East Pine Street. Craig Sayers got shot out front of it one night, killed.

Does anyone recall Buck's, where there was a drive-up window and a certain libation could be had for $.96+ .04 tax-a buck!

There was a youth center located on (?) Maple St. Ran by Hugh ?? At least in the 80's and 90's.it was tiny but he had a big heart and you could play bumper pool there

My uncle Roy Kaufmann owned that pizza joint and bar and pool.He is still about in Wisconsin.