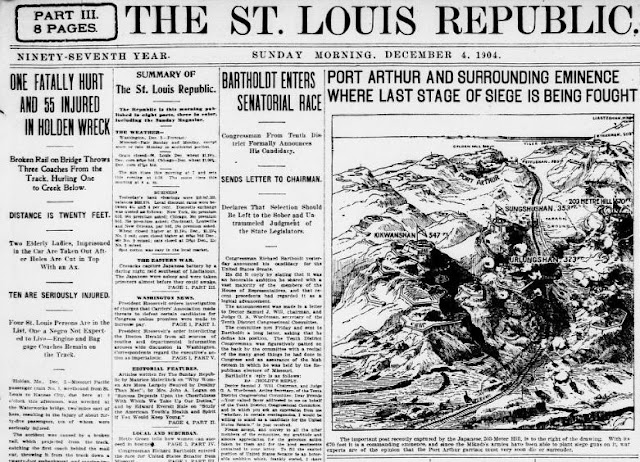 SIXTEEN IN HOSPITAL.
All Victims, of the Holden Mo. Wreck Expected to Recover
Kansas City, Dec. 4.—Only sixteen of the fifty or more persons Missouri Pacific wreck near Holden Mo. yesterday are still in hospitals in this city. Of those remaining: here the condition of Mrs. Mary Gillett, of Canton, K. Y., is the most serious. She is seventy-four years of age, but her attending physician believes she will recover. Mrs. Gillett was in the rear Pullman, which, was precipitated into a creek more than twenty feet below the bridge where the wreck occurred, and she was rescued from the wreck after holes had. been chopped in the top of the car with axes.
[The Washington Post, Dec. 5, 1904 (Washington, D.C.). 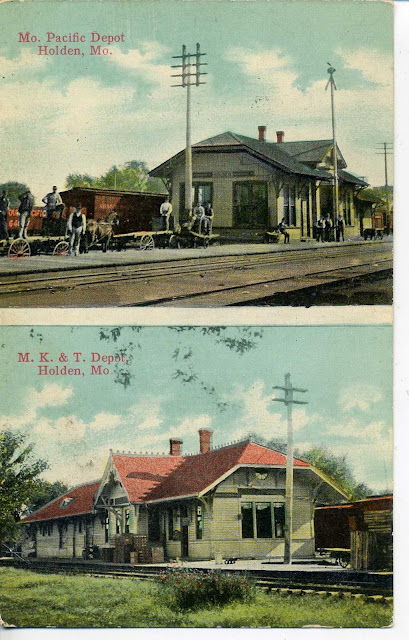 
The train was fifteen minutes late and was running fast to make up time. It was flagged at Centerview, the first station west of Warrensburg, and it there received orders to run slow, it is said, over the Post Oak bridge between Centerview and Holden. In violation of this order, the train rushed down through the Post Oak valley at the rate of forty-five miles an hour. The engine and first baggage car went over the bridge all right, but just as they reached the other side there was a crash, and in a moment the remainder of the train, consisting of five coaches, were thrown in a heap. A rail on the bridge was broken or spread. Some of the coaches went into the bed of the creek and down a declivity of thirty or forty feet.

Two of the victims of the wreck, Mr. and Mrs. Wm. Jamieson, are well known residents of Trinidad. Mr. Jamieson is the proprietor of the big Jamieson House Furnishing company and he and his wife were returning home from the world's fair. Mrs. Jamieson's mother and sister, Mrs. Gillette and Miss Gillette were accompanying them. Charles Black received a telegram yesterday morning from Mr. Jamieson, sent from Kansas City, stating that neither he nor his wife were dangerously injured. Mr. Jamieson escaped with a few bad cuts about the head, but Mrs. Jamieson had her collar bone broken. She is now in the hospital at Kansas City and will remain there until she recovers from the shock sufficiently to travel. They are expected home the latter part of the week."
Chronicle News 12-4-1904"ESCAPED INJURYMrs. Charles Rapp Was In Missouri Pacific Wreck, But Was Not Hurt At AllMrs. Charles Rapp returned this morning from an extended visit east. She was in the Missouri Pacific wreck at Holden, Missouri, Saturday afternoon, and was an occupant of the pullman car which rolled down a thirty-foot embankment. She sat directly in front of Mr. and Mrs. W.M. Jamieson, both of whom were severely injured. Mrs. Rapp, however, was not brused at all, though she was badly shaken up, and reached home quite worn out. She and one other lady were the only occupants of the car who escaped injury."

The St. Louis Republic
SUNDAY MORNING, DECEMBER 4, 1904.
PRICE FIVE CENTS.
ONE FATALLY HURT and 55 Injured in Holden Wreck
Broken Rail on Bridge Throws Three Coaches From the
Track, Hurling One to Creek Below.
DISTANCE IS TWENTY FEET.
Two Elderly Ladies, Imprisoned
in the Car Are Taken Out, After Holes Are Cut in Top With an Ax.

CONDUCTOR HOOTON SAYS TRAIN WAS RUNNING SLOW
The wreck at Holden, Mo., according to reports received by General Manager Sullivan, is supposed to have been caused by a broken rail.
The conductor of the train, J. C. Hooton of St. Louis, in his report on the wreck stated that he had been warned that the stretch of track was in bad condition, and for that reason the train was not going at a speed exceeding eighteen miles per hour.
As soon as news of the wreck reached the railway officials, relief trains were sent out from Sedalia, Kansas City and Warrensburg, and the wounded were taken to Kansas City.