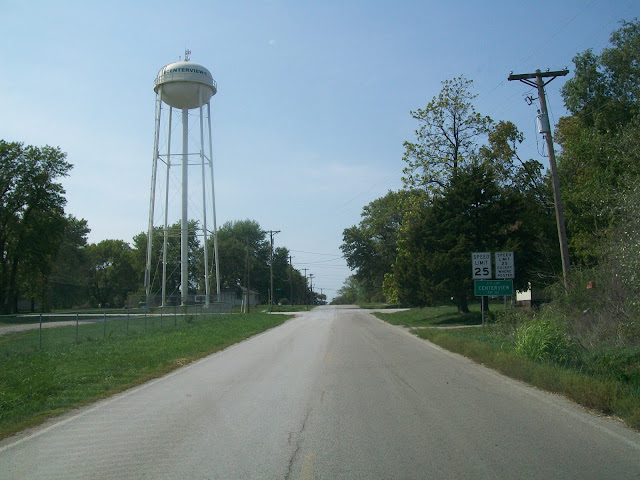 Centerview, Missouri
The first county court was held at the residence of Mrs. Rachel Houx, near Columbus, on April 13, 1835. Amos Horn was made president of the court; John H. Townsend appointed clerk pro tempore: James Carmichael, appointed assessor, and court then "adjourned until the court in course." which was the following May. Townships. — At the second court on May 4. 1835, Richard Hancock was appointed collector for the county, and the county was divided into four townships, Jackson. Washington, Jefferson and Madison. Jackson township extended fifteen miles east and twelve miles south from the northwest corner of the county, and included all of congressional townships 46 and 47 in ranges 17 1%, and east three miles of 29. The site of Centerview town was in the southeast corner
County Seat
The county seat was located at Warrensburg in 1836, and the first county court held there was at the residence of Henry Colbern, with Uriel Murray presiding.
Warrensburg has continued the county seat so long that few know
that it was originally established in Hazel Hill township and later, at one time, a regular campaign was opened to move it to Centerview.
Judge Harvey Harrison, who came here in 1831, and died in 1890, gave the following account of the county seat location to Mr. W. E. Crissey in 1889: site for the future county seat. The commissioners first selected an "In 1835 the county court-appointed commissioners to select a
Some people had moved into the county and settled near Shanghai place about a mile west of where Judge William McMahan now lives.
was on one side of the center of the county. This commission (or Cornelia) and these bitterly opposed the site selected because it, Warrensburg, as being as near the geographical center of the county reconsidered its work and selected the original site of the town of as it was possible to get it. The county then bought the land of
In the campaign to move the county seat to Centerview, a piece of news- the owners and laid out the town of Warrensburg, now known as Old Town and appointed James Carmichael, commissioner to sell the lots."
George Washington, Elhanan Roop, and others filed 'the petition paper was published in Holden especially to promote the move, and on August 14, 1872, the records of the county court show the following:
justice of the county of Johnson from the town of AVarrensburg to praying the court to submit to the voters at the next general election, November 5, 1872, the proposition "for the removal of the seat of the town of Centerview." It was taken under advisement till 1 p. m.
elected by the township did much of the work done by county officers, Later in the day "George Washington, on behalf of the petitioners, withdrew the petition." From 1873 to 1877, the township system was in force and officers especially in the assessment, collection and disbursement of the revenue.
Johnson County, Missouri Genealogy Trails
Source: "History of Johnson County, Missouri" by Ewing Cockrell, 1918
Transcribed by Karen Hammer -2009
First County Seat Battle
In 1872, Elhanan Roop and George Washington of Centerview attempted to pass through county legislation a major move that would have moved the county courthouse from Warrensburg into neighboring town of Centerview. Most of the people of the county living outside Warrensburg had signed the petition and Warrensburg became frightened over the possibility of losing the county’s capitol. Though the petition was presented to court, for some strange reason, Roop and Washington removed their request in the afternoon. The courthouse still sits in Warresburg today. 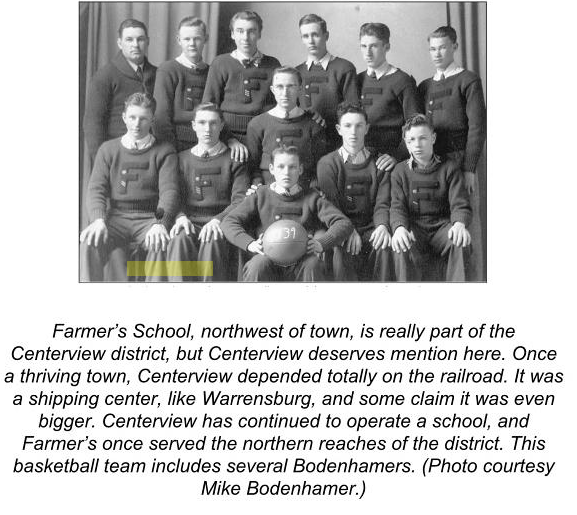 Early Churches.-Centerview township was active in church organization during the early pioneer days.
The old Smyrna church, four miles southwest of the village of Centerview, was the oldest church building in the township. It was a log structure thirty feet square and was known as the Free Church. It was built in 1840. and has long since disappeared, but was one of the famous churches of the early days. Some of the pioneer preachers who held services here were Joseph White, William P. C. Caldwell, Amos Horn, a Baptist minister, J. B. Morrow, of the Cumberland Presbyterian church, and Robert Glenn, a Presbyterian minister.

The Baptist. Brethren, Methodist, Presbyterian and negro Methodist churches were all organized before 1880 and are still in existence. They are covered in the general church chapters in this book.

Official Records, Statistics, Justices.-The justices of the peace in Centerview township as far back as the records go. with the dates of their election, are: 1878. George Washington, J. W. Davenport; 1882, W. L. Shipp. A. M. Repp: 1886, R. B. Wright, J. W. Davenport; 1890, R. B. Wright, R. C. Brownlee; 1892, H. Jackson: 1894. R. B. Wright; 1896, J. C. Oliver: 1898. R. B. Wright; 1902, R. B. Wright, A. D. Gowans; 1904, V. D. Washington; 1906, R. B. Wright. John Smith; 1910, A. D. Gowan; 1914. Howard Graham.
County Officers.-The following county officers have been elected from the township since 1882: 1886, William A. Porter (Republican), recorder: 1898, Robert B. Graham (Democrat), county judge: 1902, W. L. Shipp (Democrat), appointed school superintendent; 1905-1907-1909, W. L. Shipp (Democrat), elected school superintendent.
Road Improvements.-Permanent county road improvements made by the township since this system was established, up to January 1, 1918, were twenty-one in number and aggregated $1,159.50 furnished by the citizens of the township, and $1,150 by the county. In the amount of this work Centerview ranks eighth among the townships of the county.
Organizations.-The following is a complete list of all organizations of every kind in Centerview township. Full details of each organization are in this book in separate chapters on the different organizations :
Churches-Baptist (Vitae Springs), Brethren, Cumberland Presbyterian, Methodist, Presbyterian,
Negro Churches-Baptist, Methodist.
Fraternal Organizations-Modern Woodmen.
1917 War Organizations-Red Cross, Centerview Branch.
Homemakers' Clubs-Briscoe, Glendale, Gowens, Willing Workers.
Miscellaneous-Clover Leaf Club, Village Improvement Club.

Total number of organizations in township is sixteen.
CENTERVIEW.
Centerview town is a thriving and progressive village on the Missouri Pacific railroad between Warrensburg and Holden.
It was founded in 1865, when the Pacific railroad was built. The postoffice here was established with the laying out of the town and Elhanan Roop was the first postmaster.
Centerview is surrounded on its four sides by some of the best farming and stock raising country in this section.
It has a bank, high school, four churches, two negro churches and houses representing all the leading businesses.
The town is incorporated and the following are its officers since then :
Chairmen.-1913-14, A. D. Gowans; 1915-16, C. G. Huggins; 1917-18, J. F. Zoucha.

Crest Ridge Elementary opened the doors to the new building on August 18, 2004.
A variety of programs are offered at Crest Ridge Elementary as supportive help for students. These include, Learning Disabilities, Educable Mentally Handicapped, Behavior Disorders, Speech Therapy and Language Therapy. These programs are funded in Public Law 94-142 and have specific requirements in regard to qualification for services and procedures for referral and evaluation. Three other programs that are available for supportive help are gifted education, remedial reading and remedial math.