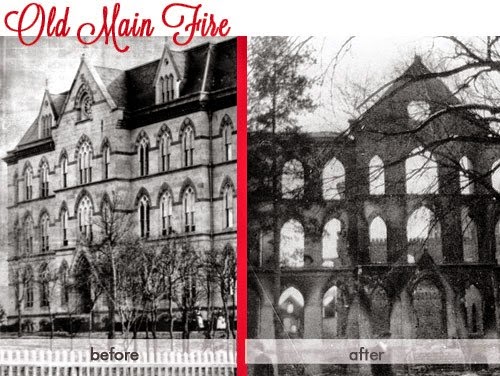 
It was during the wee hours of a cold, winter morning on Saturday, March 6, 1915, when a fire of disastrous proportions threatened to delay the opening of the spring term for students of Normal School No. 2 in Warrensburg. However, that threat was quickly diminished when the Warrensburg community rallied around the school and its faculty, staff and students to assure that classes would continue uninterrupted.


It was night fireman John Butler who looked out of the window of the powerhouse on the windy night to see Old Main, the school's main classroom building, on fire. He quickly sounded the alarm, and the local fire department fought six inches of snow and a frozen fire hydrant in an attempt to save the building.


However, at daylight it became obvious that Old Main, which had been built in stages between 1872 and 1882, along with the Science Annex and the Training School, had been destroyed. Although much of the furniture, including two pianos, had been carried from the Training School and saved, 45 years of academic records and 40,000 volumes that made up the school's library also were lost.
Normal School President William J. Hawkins announced the next day the spring term would begin on Monday as scheduled, much to the amazement of some. However, with his announcement, the Warrensburg community sprang into action to assure that the president's promise was kept.
Community leaders joined normal school administrators in surveying the community for locations in churches and public schools where classes could be held. Every church in the community offered facilities, as did the local fraternal organizations. Private homes with large rooms offered accommodations, as did Selmo Park, the Nickerson home that was later to become the president's residence. Classes started as promised, and the students in the Training School reported, as scheduled, on Tuesday morning.
Jesse J. Culp, president of Warrensburg's Commercial Club, called a meeting of community leaders, and committees of business and community leaders were formed to assist normal school officials. A committee was formed to obtain books to replace those lost in the library, and a citizen committee departed for Jefferson City to meet with Gov. Elliott Major about funding to rebuild the Normal School.
Major called on the House and Senate to appropriate funds for reconstruction. Within days, legislators forwarded funding authorizations totaling $470,000, including $280,000 for a new administration building and science hall and to rebuild the training school,The fire also fed the rumor mill that due to the massive loss, the Training School would leave Warrensburg and relocate to another community where facilities were readily available. The president of Normal School No. 1 in Kirksville even offered President Hawkins the opportunity to send the Normal
No. 2 students to his school. The quick action of the governor and legislature quickly put to rest the rumors.
Construction began on the new Science Building, and the cornerstone for the new administration building was placed on July 11, 1916. Salvaged from the rubble of the fire, the cornerstone of Old Main later was placed in the base of the right gatepost at the north entrance to campus.


-With acknowledgement to Education for Service by Leslie Anders


Loss Estimated at Half Million Dollars School Will Be Continued In Temporary Quarters Warrensburg, March 6.
The Warrensburg state normal school here was destroyed by fire early today. All buildings except the Dockery gymnasium and the manual arts building were burned. The loss is estimated at half a million dollars. With the exception of the University of Missouri, the Warrensburg state normal school was the largest of the state educational institutions, having 2,000 students enrolled. The main building was erected in 1871 and from time to time additional buildings have been constructed,- the latest being the Dockery gymnasium, which was not destroyed in the fire. It was erected in 1905. The flames, which were discovered first in the laboratory of the science hall, fanned by a stiff breeze, quickly swept through the administration building and into the auditorium and the domestic arts building. The manual arts building and the Dockery gymnasium, which were apart from the remainder of the buildings, were saved. The destroyed buildings were erected at a cost of $300,000 to the state, while the value of the equipment was estimated at $200,000 more. In addition, most of the instructors lost personal effects and valuable work. Pleas for aid in fighting "the fire were sent to Kansas City and Sedalia, but the local department, assisted by citizens, obtained control over the blaze before they responded. 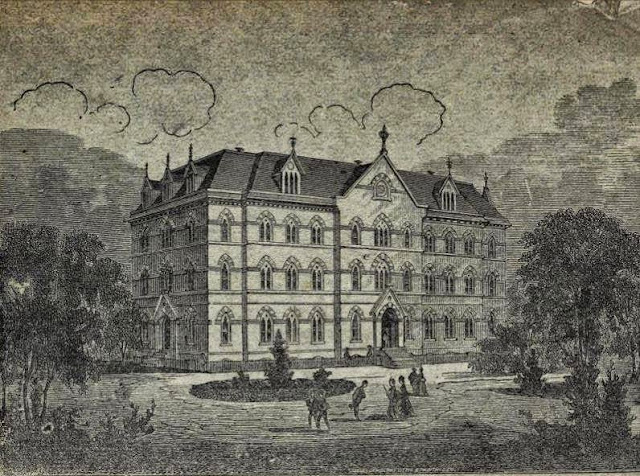 The Normal School grounds were quite different from those found at UCM today, but many of the historic buildings remain as a reminder of the past. Much of the campus did not survive a devastating fire in 1915 that was believed to have been caused by a short circuit in electrical wiring. The Dockery Building, the Powerhouse, and the Fine Arts Building were the only buildings spared in the early morning blaze that destroyed the records of 45 years, the 40,000 volumes of books which composed the school's library, office records, collections, and countless other items.


Other Fires.-Most of the business buildings were frame. Among the first merchants to establish themselves in New Town prior to 1865 were Ming & Cruce, Henry Neill. A. H. Gilkeson & Co., Henry Bros., and De Garmo, Schmidlap & Co. All these business houses and a large part of the town were burned on December 24, 1866.


The first hotel in New Town was in 1865 when the Redford House was built south of the Missouri Pacific railroad depot. This was destroyed by fire in 1868 and the Simmons Hotel was built on its site. This was finally bought by Mr. J. N. Christopher and converted into the town's first school dormitory, the Young Women's Christian Association building 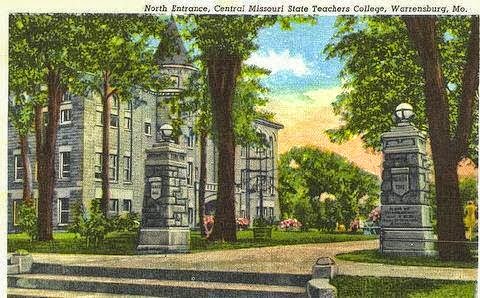 The North Entrance, near Dockery, the 1915 Graduating Class Builds Pillars, Places Cornerstone and as the Campus was being rebuilt in 1915 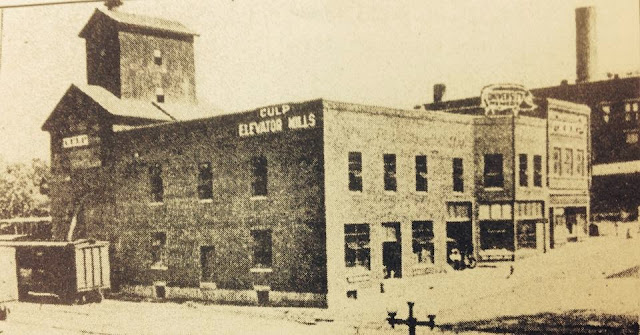 Culp Elevated Mills, Jesse J. Culp Proprietor and Organizer to Rebuild the College Campus after the 1915 FireJesse J. Culp, proprietor of the Elevator Mills of Warrensburg, has twenty-four years of business life to his credit and is still a young man. He was born July 14, 1875 on his father's farm near Leeton, Missouri, the son of John and Mary A. (Miller) Culp. John Culp was born in 1846 in Logan County, Ohio and Mary A. (Miller) Culp was born in 1852 in Allen county, Ohio. They came from Ohio to Missouri in 1868 and located on the farm near Leeton, where they remained several years, and then Mr. Culp traded the Leeton farm for the
Dr. Osborne place, which he later sold and in 1888 bought the Warrens-burg elevator from Fitch & Smithton. John Culp was the owner and manager of the Elevator Mills of Warrensburg for seventeen years, from 1888 until 1905.
To John and Mary A. (Miller) Culp were born the following children: Lizzie C, who is the wife of M. J. Reggie, a well-known grocer of Warrensburg; Jesse J., the subject of this review; Abram B., a dentist of Kansas City, Missouri; David D., the manager and owner of the Lakeside Hotel, Seattle, Washington; Lottie N., the wife of Samuel H. Davis, of Spokane, Washington; and Adelia H., the wife of Thomas H. Douglass, and resides in Bolivar, Missouri. John Culp died at the age of fifty-nine years, December 31, 1905 and his wife died September 18, 1915. Both father and mother were laid to rest in the Warrensburg Cemetery.
Jesse J. Culp attended the public schools of Johnson county and the Warrensburg High School. After leaving high school, he was associated in business with his father until 1905, when he began business for himself, succeeding John Culp, his father, as the proprietor of the Elevator Mills of Warrensburg. September 15, 1908 the elevator was burned. Fire was discovered about five o'clock in the morning and it is supposed it started from a spark blown from an engine, which had been switching on the railroad several hours that night. The case was in court for three years and was then compromised by the railroad company paying part of the loss sustained. Mr. Culp rebuilt the elevator immediately, making the new one fireproof. He buys and sells all kinds of grain, seed, and like produce and has storage room for about thirty cars of grain and elevator capacity of thirty thousand bushels. The elevator and buildings occupy all of block E on Grover street in the second addition of Warrensburg and all the elevator buildings are covered with iron. Mr. Culp's present office and wareroom were built in 1909. The wareroom and office are constructed of brick, 50 x 100 feet in dimensions, and the building consists of two stories and is one of the best and most convenient on the line of the Missouri Pacific railway.
In 1904, Jesse J. Culp was united in marriage with Judith Rice, the daughter of Samuel and Susan R. Rice. Both parents of Mrs. Culp are now deceased. To Jesse J. and Judith (Rice) Culp have been born three children: one child died in infancy; Susan Margaret; and Leland James. Mr. and Mrs. Culp reside in their home at 510 South Holden Street in Warrensburg.
At the last meeting of the Warrensburg Baptist church in 1909, Jesse J. Culp was elected superintendent of the Baptist Sunday School, which has an average attendance of four hundred twenty members. Mr. Culp has held this office since 1909. He is also a member of the Ancient Free and Accepted Masons of Warrensburg, of the Blue Lodge, and is a Knights Templar. For the year 1915, Mr. Culp was president of the Warrensburg Commercial Club. His high standing in the state of Missouri as a businessman is shown by the fact that he has been a director of the Missouri State Grain Dealers' Association for the past four years."History of Johnson County, Missouri" by Ewing Cockrell, 1918 - Submitted by Karen Hammer -2009 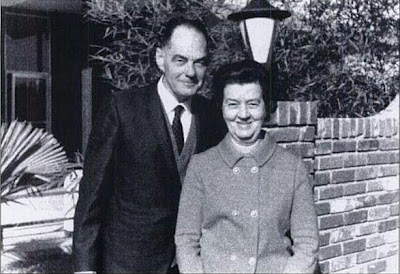