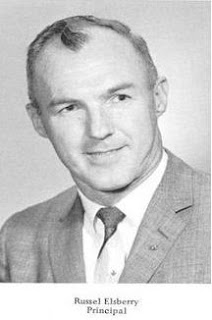 The class of 73 offers its condolences and prayers to Mr. Elsberry's family and friends.  We give thanks for his presence in shaping our lives.  And we remember Mr. E and Louise taking the time to come by our class reunion 4 years ago , our 35th, and saying, "I was your age today when I was your prinicpal"
Thanks Mr. E........God Bless 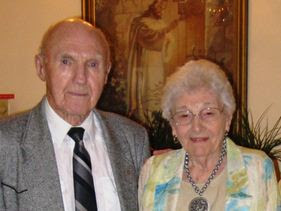 From the 1959 WHS Warrensburg, Missouri Arrow High School Yearbook
"Mr. Elsberry came to us from Camdenton, Missouri, having been an educator for many years.  He is a graduate of State Teacher's College of Kirksville (Truman State), Missouri and received his master's degree from Missouri University (MU).  While in the army he traveled in six foreign countries. Mr. Elsberry's office door is always open, symbolic of the understanding that students and teachers find there."
From The Moberly Monitor newspaper June 17, 1945
Sgt Russell W Elsberry son of Mr and Mrs Guy Elsberry of Madison is now in North Africa In a recent letter to his sister Mrs Earl McCart of Moberly he tells of his home between two mountains he letter reads.  Sgt Elsberry entered training August 17 and is in the signal corps He received training at Camp Crowder and at a radio school in Kansas City.

From The Moberly Monitor newspaper October 10, 1945

Moberly Soldiers, Others From This Area Due in U.S.
A number of men from the Moberly area were due to arrive on the East Coast in the last few days according to the Associated Press Two Moberly men arriving day in New York on Richville Victory are Pfc Charles A Porter and Virgil J Wilson Two Clark men Wm M. Ashbury and Warren G Toops were among four from this area who arrived in New York aboard the E B Alexander yesterday The others were T/3 Russell W Elsberry, Monroe.

On January 8, 1942, under War Department Circular No. 5, the ranks of Technician Third Grade (T/3), Technician Fourth Grade (T/4), and Technician Fifth Grade (T/5) were created and replaced the existing specialist ranks. Initially, these ranks used the same insignia as the Staff Sergeant, Sergeant, and Corporal, but on September 4, 1942, Change 1 to AR 600-35 added a "T" for "Technician" to the standard chevron design that corresponded with that grade.[2] Despite that, as with the Specialists that they replaced, unofficial insignia using a specialty symbol instead of the T were used in some units.[citation needed]
A technician was generally not addressed as such, but rather as the equivalent line (NCO) rank in its pay grade (T/5 as Corporal; T/4 as Sergeant; T/3 as Sergeant or Staff Sergeant). Officially, a technician did not have the authority to give commands or issue orders but could under combat conditions be placed second in command of a squad by a Sergeant. Unofficially, most units treated them as though they were of the equivalent rank of the same pay grade.[citation needed]
The Technician ranks were removed from the rank system in 1948. The concept was brought back with Specialist ranks in 1955.
Technical Sergeant Technical Sergeant was renamed Sergeant First Class in 1948.

The Warrensburg Schools Foundation is pleased to announce the creation of a new scholarship for Warrensburg High School seniors.  The Russell and Louise Elsberry Education Scholarship fund of $10,000 will award $2000 scholarships to students for the next 5 years.  The scholarships will recognize and help a Warrensburg High School senior intending to pursue collegiate studies to become a teacher.  Mrs. Elsberry hopes this scholarship will continue to demonstrate their lifelong dedication to education while assisting a current student to begin a meaningful career teaching.