DANIEL'S DOOM.
Believing in Neither God nor a Here’ after,
He Swings into Eternity
Warrensburg, Mo. March 1, 1878.

The circumstances of the trial and conviction of John W. Daniel, for the murder of Jesse Miller, have been heretofore detailed. The incidents of his execution today, are now given by your reporter. The sun arose, obscured from view Friday morning, and only burst forth through the thickly clouded sky at intervals, then only to shine but a few moments at a tune. Long before the hour appointed for John W. Daniel’s execution bad arrived the streets, stores, hotels and sidewalks were lined with an anxious crowd, attracted from the neighboring towns and the rural districts for miles around, through morbid curiosity, to witness the public execution of a murderer. Daniels removed from the Sedalia jail to Warrensburg Thursday morning, where he was placed to a second story room over Morgan's grocery store, and constantly guarded up till the time appointed for the court to move to the scaffold. The Warrensburg jail was so insecure that Sheriff Emmerson was afraid to plane Daniel him, and allow him to remain overnight. From early dawn till the hour appointed for the execution had arrived a motley crowd hung round the building in which John Daniel was guarded, anxiously watching and patiently waiting for an opportunity to get a glimpse of the man who neither feared God, man nor devil. Daniel was interviewed more than a half dozen times each hour in the morning by a score of reporters, representing all the prominent journals in North Missouri, many of which came out in the morning and evening containing wood cuts of Daniel, and, while some bore a striking resemblance to the condemned man, yet none were anyways perfect. The criminal from the time of his arrest until he was convicted and sentenced to death, sternly refused to be photographed, a privilege he refused until the last. Thus it was utterly impossible to lid a correct picture of the murderer. When shown a copy of the Sedalia Democrat (extra) containing a pencil sketch taken surreptitiously, while he was confined in the Sedalia jail, he became very angry, and expressed his desire to see the author of the picture. To use Daniel's words: "I want to see who he looks like and who he is. Then I will tell him who I am, and break a chair over his head, if not restrained." John Daniel's father, an old man about seventy years of age, visited the doomed man in the room where he was confined, about ten o'clock in the morning, and had a lengthy interview with his murderous son. The old man spoke words of consolation to his son, and told him to bear up and die like a man a promise John Daniel not only made his aged father, but kept to the letter. It was also rumored about that the old man told Daniel to die like a man, as he was neither God, heaven nor hell. Father Graham, of Sedalia, and Father Pheland, of Warrensburg, visited John William Daniel in the room where he was held, about half past nine Friday morning for the purpose of holding religious services In behalf of the doomed man's welfare, but Daniel persistently refused to engage in religious services of any kind. When asked if he didn't want to engage in prayer, he sternly replied, "No!" He was then asked by a priest if he didn't want them to pray for his soul, when he replied: “You can, but it won't have any effect on me." The two priests, Daniel's father, several reporters, and others who were present, then kneeled and prayed for the salvation of the doomed wretch. His aged parent kneeled near his doomed son and prayed also. Daniel sat upright in his chair, manifesting' stolid indifference as to his fate, and calmly fingered with his beard while prayers were offered by different ones who were present. Shortly afterward the old man took his final-leave of his convicted son, never to act again in this world. We visited the scaffold, a rudely constructed frame structure, on the old plan, which stands about half a mile due north of Warrensburg in a ravine surrounded on every hand by rising ground covered with a stunted growth of blackjack bushes.

The gallows stands in a secluded spot, on a little flat, so that one cannot see the horrid structure until he approaches within some fifty or a hundred yards of the scaffold of death. This was about half past tine in the morning, yet the road leading to the scaffold, as well as the ground around the structure, was lined with curiosity seekers. While your reporter was there one at the sheriff's deputies greased the drop with lard oil. An unfeeling darkey walked up and proceeded to grease his cowhides, as unconcerned as though he had been at a shoe greasing. As we returned to the city we met a boy with the necessary tackles for a shooting gallery, hurrying to the place where the execution of the condemned murderer was to follow. Such a thing was an outrage, yet with propriety and customary promptness, the sheriff rebuked him and ordered him off the ground. All this time the sky remained clouded, save at times, and crowds of curious people continued to arrive from every direction. Sedalia even sent an excursion train to Warrensburg, which arrived here a few minutes past eleven and added its large contribution to the surging crowd in thousands then occupying every available standing or resting place along the principal streets of the little city. Twenty-five special police were detailed on duty to keep order in the city, and forty-seven guards, officered by Commander Smith, Lieut. Smith, Hewell, Lemmon and Tuttle, were also appointed, and served on duty. At precisely 15 minutes before 12 o'clock preparation to conduct the prisoner to the gallows began. At the urgent request of John W. Daniel, his sentence was read to him before he left the room, where he had been constantly guarded since his return to this city. Everything being in readiness, Sheriff Emmerson (an old gentleman upwards of 60 years of age), and his three deputies conducted the prisoner to the wagon, waiting In front Of the building, where he was seated between two deputies. Sheriff Emmerson rode by the wagon on horse-back, with Deputy Sheriff Rodgers on the seat at the left, and Capt. Burris on the seat Immediately behind Daniel, when the trio proceeded lo the scaffold of death. Then came the craning of necks, crowding, pushing and jamming, everybody endeavoring to get a glimpse at the prisoner. The wagon was guarded on each side by the special guards appointed, as the seething mass of callous people proceeded on its way.
The roads were in a shameful condition, in places almost hub-deep; yet so anxious were many to keep up with the wagon that contained the prisoner that they waded through the mud regardless of the consequences. While others pushed and crowded along the plank walks, and many climbed fences and cut across lots to reach the gallows by the shortest route. Men and boys laughed and chatted as the multitude, variously estimated at from five to twelve thousand, proceeded on its mission of death. Yet John Daniel had the consolation of knowing that many deplored his fate they pitied him from the bottom of their hearts. The ladies of Warrensburg, until today, betrayed but little sympathy for the condemned man, yet when the mournful multitude passed along, many of the ladles living on that street came out and took the first for some and last tearful look at the doomed prisoner many weeping loud, lone and bitterly. By this time the rain began to descend and continued all through the time of the execution. The scaffold was reached and the prisoner led up the steps, where his arms and legs were pinioned and the noose carefully adjusted. When Sheriff Emmerson addressed the audience as follows: "The prisoner requested that no remarks be made or prayer offered on the scaffold. He says he has lived like a man and will die like a soldier, he wants the public to understand that he is innocent." The black cap was hastily put on, when the sheriff added: "And may God have mercy on his soul." The last word was scarcely littered when, with a quick, nervous stroke, he severed the rope. At seven minutes past 12 o'clock the drop fell, and John W. Daniels, the murderer of Jesse R. Miller took his final plunge from time into eternity. In five minutes the pulse ceased, but returned again. At 12:14 he was pronounced dead, and at 12:34 his body was cut down, having been suspended between Heaven and Hell, twenty-seven minutes and ten seconds. The condemned man spoke but twice alter leaving the room where he was guarded. Once while on the road to the gallows, when the mud splattered in his face and the second time as he got out of the wagon at the scaffold. The first time Deputy Sheriff Rodgers asked: "Did the mud splatter in your face' when Daniel replied: "Yes; but that don't matter, now." The second time he descended from the wagon, he recognized an old friend and said: "Good-bye: take care of yourself."
The rope was the same that Weiners was hung with, and the black cap was used on Weiners, Ables and Daniel.

Some of the Other Hangings in Warrensburg 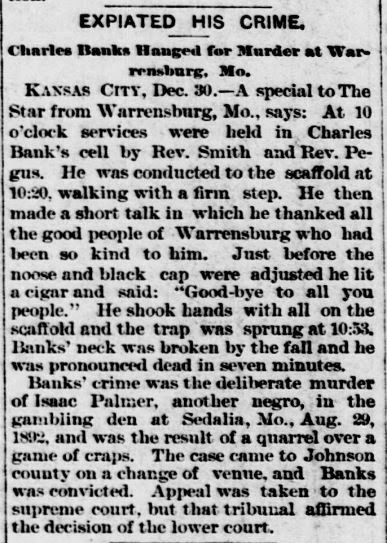 Charles Bank hanging, Warrensburg, Missouri (1893)
Probably the most famous hangman’s rope in the United States— at least outside of Ft. Smith, Ark. —is owned by sheriff Hornbeck, of Cooper county, Missouri. It was made to order by a St. Louis expert and was first used at the execution execution of John Oscar Turbngion, the murderer of Sheriff Tom Cramner, in 1890. it next did service at Marshall, Saline county, at the execution of the negro, Price, a year or two later. Chris Young, a Lexington, Mo., murderer, was the next victim to stretch the kinks out of it. Then old “Uncle Tom” Williamson, who died on the scaffold Sedalia in 1891, tested its wonderful strength. This rope was next used in hanging hanging Dick Robinson, the murderer of Johanna Schollman. Still its sturdy strands remained as strong as ever, and they served to swing into eternity Charles Banks, at Warrensburg, last December. It seemed now that certainly the old rope was entitled to a rest, but not so, for only last Friday Jake Brown, a negro murderer, was hanged with it at Jefferson City. If anyone else has a rope with a record that can beat this, let him make it known.