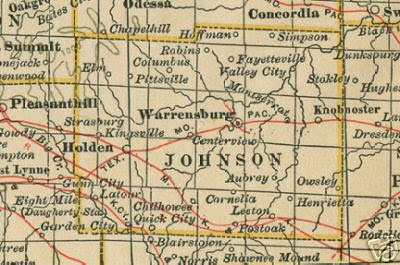 Brutal Murder Near Kingsville, Missouri
A man killed by a club; his wife chopped with an ax.

We were not informed in time for publication in our last issue of the murder of Joseph Cox and wife, living near Kingsville, but give our readers this week the following account furnished the Missouri Democrat. From all we can learn, we believe the facts are fully set forth in the communication. Dr. A. W. Reese, Coroner, was called on Friday to hold an inquest and examination and before him facts were produced not fully shown in the first inquest by a justice of the peace.


The following is from the Democrat:


This country has been raised to the highest pitch of excitement by the cold-blooded and brutal murder of Mr. Cox and his wife on the night of the 20th instant. It occurred in his own home, five miles northwest of Kingsville, in this county. Their bodies were discovered on the following day some time in the forenoon by Dr. King, the family physician; Cox being sick and under medical treatment at the time he was murdered. Dr. King merely opened the door, and seeing what had been done, summoned Cox's neighbors, who speedily entered the little shanty and saw the most revolting spectacle that ever met their eyes; the mangled bodies of the two murdered persons.


Mr. Cox was lying across the bed with his feet hanging down over the side. Mrs. Cox was on the floor, her body cut up with a chopping ax. She had been struck five times with it; on the side of the head, the blade of the ax going in full length; twice in the face, and twice on her left breast, and the other penetrating the chest, cutting the heart partly in two. Mr. Cox, it was evident, had been killed by a club and the murderer beating his head to a jelly. The ax and club, the instruments used to do the bloody deeds, were left in the house, the club lying beside the woman on the floor and the ax by the man on the bed. This was done no doubt to create a suspicion that they had killed each other. The ax with which they were killed belonged to Mr. Cox, and the club was obtained at his woodpile. Justice Monroe, of Kingsville, was summoned to the scene of horror on the day the bodies were found, but delayed making any investigation until yesterday, the 22nd, when he proceeded to Malone's school house nearby and with closed doors began the examination. More than one hundred citizens had collected by this time and felt interested to hear the testimony and judge for themselves. In the meantime, Justice Campbell arrived and proceeded to break up the secrecy of the trial. Justice Monroe now returned to the house where the bodies still were and Doctors Longacre and King were sent for; and the court was held with open doors. The law-abiding citizens were very indignant at the irregular manner in which Justice Monroe was proceeding when interrupted by Esquire Campbell. Had it not been for him, Monroe was going on to try the case before a jury, only one of whom could take the oath required by law. Upon being asked why he did not administer the required oath, he said, "I had forgot all about that nasty oath." The Justice did not finish his investigation yesterday, but adjourned to go on with it today at his office in Kingsville. The two bodies were buried in the same coffin, rudely put together of boards. The evidence elicited at the inquest was rather vague. I give below the most important portions of it:

It appears that Mr. and Mrs. Cox immigrated to this place about three months ago from Illinois, as some say; others that they came from Ohio, and at the time of the murder were living in a little house as tenants upon Dr. Dryden's farm, who was from the State where Mr. and Mrs. Cox came from, and they knew him there. Since they have been living on his place they have quarreled at different times with him about some reports that Cox told of Dryden's having murdered men where they came from. On Saturday previous to the murder, Dryden brought a watermelon to where Cox was ploughing and they ate it together, and Cox was immediately taken sick. Thinking he was poisoned, he sent for the physician, who pronounced his sickness to be colic. While he was sick, it is said that Dryden came to the house and abused him, and on Monday morning before the murder, notified Cox to get out of the house in ten days or he would take some men and tear the house down over him. As yet no arrests have been made. It would be well to state that after being summoned to appear before the Coroner's inquest, Samuel Dryden suddenly disappeared. His wife states that he left for Platte County, MO, for the purpose of procuring counter evidence of the charges made against him by Cox. We leave our readers to judge of the matter with the above facts before them.


P.S. Since the above was written, we learn that Dryden was arrested near Lee's Summit, and that Elliott, an alleged accomplice, has left for parts unknown.

(Following are comments added from newspaper article by J. L. Ferguson 65 years later (about 1934):
This happened in the area called Devil's Ridge, some 5 miles northwest of Kingsville. This name is applied to a limestone ridge beginning in the Kingsville township and extending through Jackson township to Chapel Hill. Dryden was a man who had come from Ohio and bought a large tract of land and put on considerable improvements. His neighbors described him as a hard worker, an independent sort, attending strictly to his own business and letting everybody else do the same. They told about his marksmanship and all described him as a "dead shot." They had seen him on horseback, scare up a bunch of quail and deliberately take out his big "navy" revolver and shoot the heads off of two or three quail with that many shots before they flew out of range. These atrocious murders were a mystery then and they have never been solved, however, there is another chapter: At that time vigilantes were active in Warrensburg and other parts of the state, and a short time after those murders the vigilantes came into that neighborhood and killed that farmer, who many thought was innocent. A band of eight heavily armed men caught him in his feedlot early one morning, marched him north along that rocky road something over one hundred years and then just east of the road under a large oak tree riddled him with bullets. It innocent also. She took their advice and with her three children remained in that home. One child died in young manhood. The other two went to the rural school, farmed and made reputations for honesty, uprightness and genuine neighborliness second to none. The surviving boy was a fine student and grew into one of the best business men in the community. He was interested in Kingsville and Strasburg banks and also in other banks in western Missouri. Seemed to have been the general impression that these eight men came from "down east" and did not belong in that community. Anyway, the law took no notice of the murders or the shooting. The murdered man left a wife and three children. She went to her neighbors and asked what to do, stay or move away. They all advised her to stay, as everyone knew that she and the children were innocent, and they believed her husband was innocent. Near the oak tree, was another large oak tree with a limb extending out on the south side. Here, not much later the vigilantes again came into notice. These men may or may not have been some of the same men who shot the farmer. This set took a man by the name of Bingamin, who lived near that place, and accused him.
They may have been honestly trying to find horse thieves and then again they might have been the thieves themselves and trying to find out if Bingamin knew anything. He knew nothing and told them if they were intent on hanging him of stealing horses. Horses had been stolen in that community, but Bingamin old his accusers that he was innocent. They professed not to believe him. The rope was adjusted around his neck, thrown over the limb, and he was yanked off the ground. He was soon let down and given another chance to plead guilty. This he stoutly refused to do, and he was jerked up again. The second time they let him down and when he revived told him if he would tell them the names of the men who had stolen the horses they would set him free.
Innocent man they might as well get it over.
They hoisted him in the air for the third time, and as before, let him down before he was dead. Learning nothing, they set him free. There was not a man in that community who stood higher than Bingamin. He was absolutely honest and above board. Some thought the hanging was done through spite or politics. The vigilantes here overstepped the bounds of propriety, just as they did towards the last in Warrensburg, but their efforts did have a salutary effect on the morals of the county.