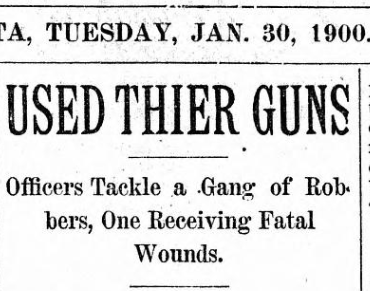 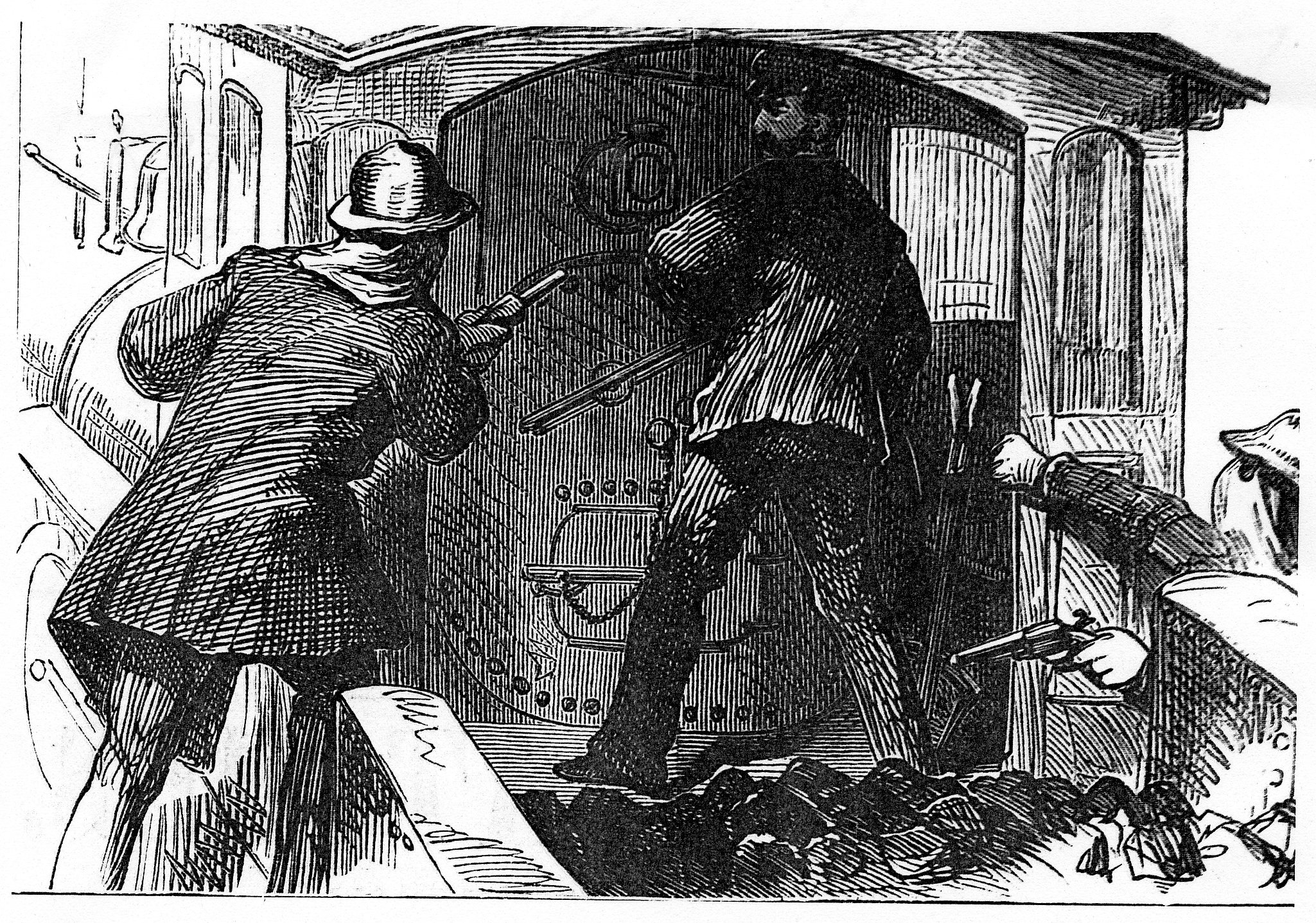 HOLDEN, MO., Jan. 30.In an attempt to arrest six supposed train robbers, John Jackson, a detective for the Missouri, Kansas and Texas, railway, from Sedalia, was shot through the head and will die.Superintendent D. Hardy of the Mis­souri Pacific railway had learned that an attempt would be made to rob the ex­press car on the easy-bound Missouri Pa­cific train No. 5, due here at 3:08 a. m. for St. Louis. A posse was organized in Sedalia, and left here on a special train for Warrensburg, where the sheriff and special officers were taken aboard. Superintendent Hardy's information was that the hold up was to take place near Doran, a small station near Holden, when the train reached Holden, officers were informed that the suspected men were at a resort, and it was decided to arrest them then. The town marshal, another officer and Jackson started to make the arrest. Jackson entered the house and one of the suspected men fired, the bul­let passing through Jackson's head. The officers returned the fire but the six sus­pects escaped. Later, one of them, badly wounded, was captured. He refused to give his name. Jackson, who was taken to the hospital at Sedalia, cannot recover. 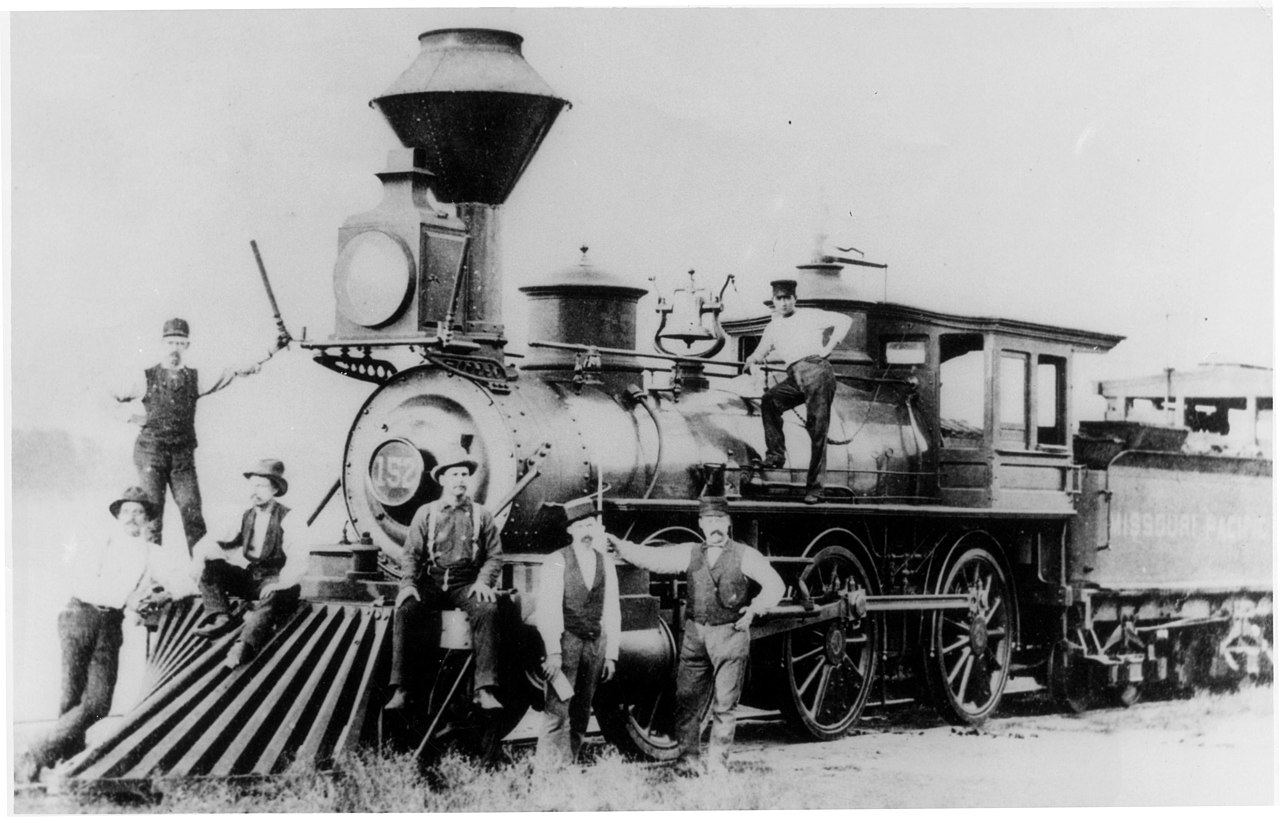 
The arrested robber finally said his name was Shores and confessed to numerous robberies. He admitted he held up the Missouri Pacific agent at Inde­pendence recently and of having robbed the Pittsfield post office last Friday night. It is believed that Shores and the man who shot Jackson and escaped, held up a Missouri Pacific passenger train west of Kansas City, Jan. 9, rob­bing the sleeping car passengers. Blood hounds will be used to trace the escaped robbers. The proprietors of the resort where the men were found have been arrested for harboring the robbers. It develops that a woman revealed the planned robbery to the officials at Se­dalia. Her identity is not known. Two men were to board either train No. 8 or No. 10, eastbound, at Holden, and rode to Centerville(Centerview), eight miles east, where the engine was to be detached, after which the robbers were to hold up the express messenger and passengers.

KANSAS CITY, Jan. 30.—In anticipa­tion of a holdup, Missouri Pacific pas­senger trains leaving here for St. Louis, 9 10:45 p. m., each bore a complement of armed detectives, the local officers of the road having secured information that an attempt to rob one of their trains would be made.
editor note:
Place name: Doran
Description: A station on the Missouri Pacific Railroad on the line between Centerview and Madison Township. Named for a man who owned the land. (Charley Houx; Map 1930)
Source:  Johnson, Bernice E. "Place Names In Six Of The West Central Counties Of Missouri." M.A. thesis., University of Missouri-Columbia, 1933.
Morgan County Republican, Nov 8, 1906

Charged with a Murder.
Warrensburg. Deputy Sheriff Louis Geer has returned from Chicago, having in charge Frank Sassaman, charged with the killing of Carl Miller, near Holden, about two years ago. About a year ago a woman giving her name as Annie Bentley, a domestic, of Topeka, Kas., went to Holden and informed the officers that she and Robert Sassaman, In November, the year before, traveling from St. Louis to Kansas City in a wagon, near Warrensburg were overtaken by Carl Miller, an old man, who owned a good wagon and team. They traveled in company until one night they camped near Holden, when Miller was killed and his body sunk In an abandoned well. The officers, on investigation, found no body. An effort was made to capture Sassaman in Kansas City, Kas, but he evaded them. Nothing was heard of him until Officer Geer received a letter several days ago, in which a St. Louis woman stated where Sassaman could be found In Chicago. His arrest followed. Sassaman immediately acknowledged his identity, and came back without requisition papers. He acknowledge that he was with Annie Bentley near Holden when Miller was killed, but he asserts that he didn't do It.
Link to Murder Trial
1904 Holden Train Wreck Link