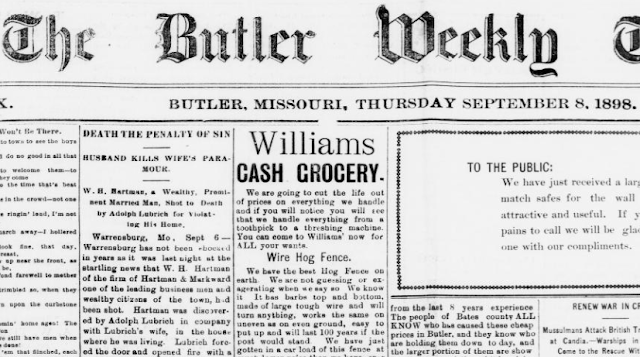 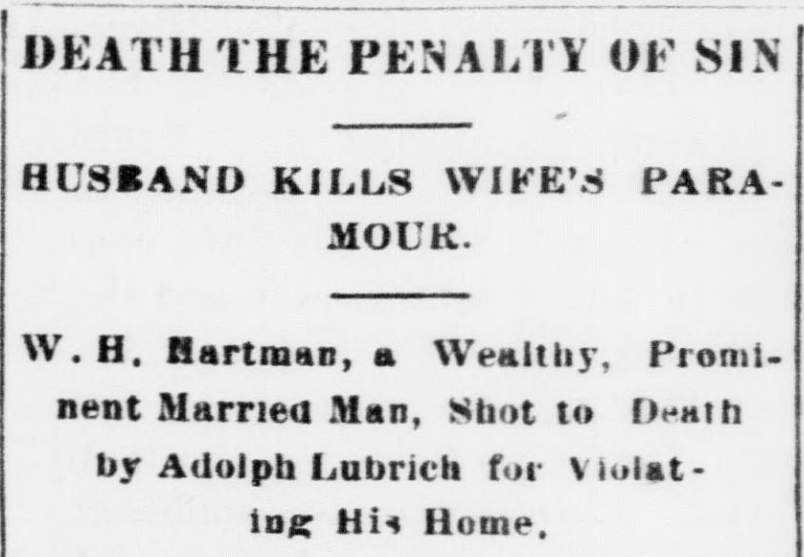 
Warrensburg has not been shocked in years as it was last night at the startling news that W. H. Hartman of the firm of Hartman & Markward one of the leading business men and wealthy citizens of the town, had been shot. Hartman was discovered by Adolph Lubrick in company with Lubrick's wife, in the house where he was living. Lubrick forced the door and opened fire with a revolver. He put three bullets in Hartman's body, any one of which would have proved fatal. The first struck in the neck, going to the base of the skull; the second struck in the back, coming out in front just below the breast bone, and the third struck just over the hip and lodged in the intestines. Night Watchman Hampton rushed to the scene and found Lubrick threatening his wife. He gave him self up to the authorities and was placed in jail. Hartman had been in the house about an hour when the tragedy occurred, he was armed and died with a pistol in his hand. The victim of the tragedy had supported Mrs. Lubrick for several months. Lubrick discovered the fact and went to the house to kill them both. Lubrick and his wife, up to last November, had lived in Lexington. During that month Mrs. Lubrick with her children came to Warrensburg on a visit to her parents and it was during this visit she became acquainted with Hartman. 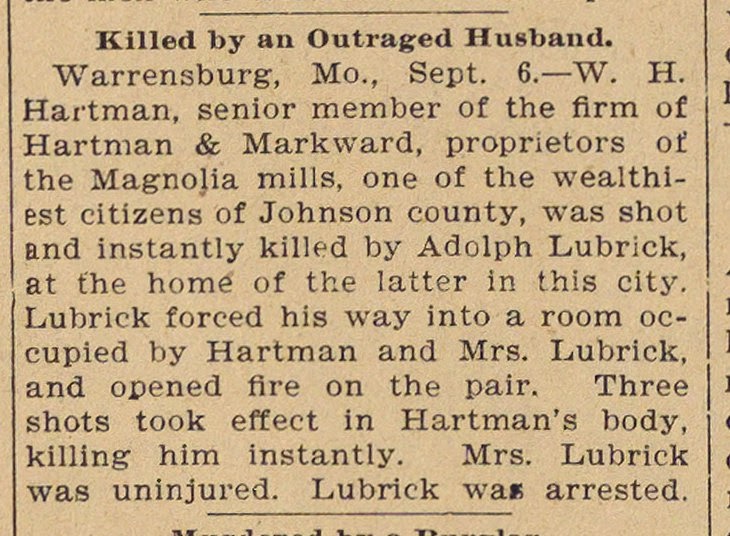 The result was that she rented a house and made it her permanent home. Lubrick, in the meantime remained at Lexington. The long visit of his wife aroused his suspicions, and he arrived in Warrensburg on Sunday night at 11:18. He remained in hiding all of Monday, and went to his wife's house early in the evening and hid in the cellar. Hartman went to the house about 9 o'clock, taking with him some wine and lunch, which he and Mrs. Lubrick disposed of. Lubrick's suspicions being fully confirmed, he proceeded to the room wherein was his wife and paramour, and committed the deed as above stated. Lubrick was seen by a reporter and told a straightforward story, not being in the least excited. He stated that he fully intended to kill them both, but his wife begged so piteously, and for the sake of the children, he spared her.


A STORY OF SHAME. W. H. Hartman Killed at Warrensburg Last Night
BY ENRAGED HUSBAND.
Adolph Lubrick Fires Three Bullets Into Hartman.
HE FELL DEAD INSTANTLY. Lubrick Returned Unexpectedly from (South) Dakota and Discovered the Sin of his Wife. Once more Warrensburg is in the throes of a sensation—the greatest she has ever experienced. At his palatial home on  (201) West Gay street, amid all the splendor and those luxurious surroundings which money can give, W. H. Hartman, second wealthiest man in Johnson county and one of Warrensburg’s most prominent and influential citizens, lies cold and dead in his coffin, surrounded by a loving family, whose sorrow is made keener and sharper by the awful fact that he died in open sin—in the arms of another man’s wife, with his head pillowed upon her bosom. In a handsome house in another part of the city, a faithless wife mourns the loss of character, friends and reputation, with the sound of angry cries and pistol shots yet ringing in her ears; with spattered walls and pools of blood upon the carpet of her boudoir to remind her of the awful tragedy which occurred before her eyes but a few hours previous. It is the old, old story; oft told and told again. Sixteen years ago Mollie Brammer was an attractive, pretty girl, full of the innocent ways of young girlhood, and the belle of the Old Town—the west end of Warrensburg. As she budded into womanhood the Old Town swains and beaux danced attendance upon her, and vied with each other in their devotions. But on an evil day she fell, and in course of time a little life was ushered into the world, amid surroundings of the greatest mystery and secrecy. The child was never heard of afterbirth, and its final end was shrouded in darkness. It is said that the little one was born dead—and the explanation was accepted without comment by the few who knew of the poor girl’s mistake. Once more Mollie moved among the people, but her star had dimmed, and her former friends knew her no more. Ten years ago she visited an aunt in Lexington, and while there met a man named Adolph Lubrick the slayer of the man who now lies dead at his luxurious home. The acquaintance ripened into a mutual affection, for Lubrick was a handsome fellow, with an attractive air and a dash of boldness about his personality. In a burst of confidence Mollie told of her former wrong-doing, and received a full and free forgiveness. In two weeks they were married and settled down to a happy home life in Lexington. Two children were born; a son and a daughter; bright, pretty, interesting children. For eight and one-half years they lived in Lexington, and there was not a cloud nor a blot upon the sunshine of a happy home. Still, however, suspicion rankled in the breast of the husband, and the skeleton in the family closet became a grinning, living, horrible reality to him. His fears were never communicated to his wife, and he nursed his sorrow in secret last March the family moved to Warrensburg and rented a pretty little cottage at 306 West Culton street.
Lubrick furnished it lavishly, and made a most attractive little nest for his wife and loved ones. Business called him to the land of the Dakotas, and he went—with many misgivings, but determined to trust all to Providence and the honor of his wife. W. H. Hartman had known Mollie Lubrick (Marriage License Adolph LUBRICK, Lex. to Mollie BRAMMER, Warrensburg 7 May 1889 in Lexington, MO) in the days of her youth and innocence, and saw the opportunity presented in the absence of the husband in a far-off state. Hartman was wealthy and influential, half owner of the Magnolia Roller Mills,
president of the Magnolia Light, Heat and Power Co.,

and Magnolia opera house, and treasurer of the Warrensburg board of trade. He was a progressive man, an up builder of the growth of the city, and a promoter of public enterprises. He had a magnificent home on West Gay street; a loving wife, and a devoted family of young girls just ripening into womanhood. He had all that his heart could desire, but he was not satisfied. While Lubrick was in South Dakota the rich man became a frequent visitor, it is alleged, at his home. Last night, while the light­nings flashed and the thunders rolled, and the rains descended in a perfect flood of waters, Hartman silently stole to the residence of his paramour. She was awaiting him, and after the children were snugly ensconced in their little beds, the front door was silently opened and he was admitted. Amid the dark watches of the night the suspicious husband, who had secretly returned from Dakota, kept silent vigil around the darkened home, and awaited for the opportune moment to strike a death-blow to the despoiler of his happy home. After being admitted, Hartman went to the kitchen and the two partook of a light lunch. After this a pallet was made upon the floor and man and woman silently prepared for the night. Curtains were drawn, the lamps lowered, and soon the household was wrapped in silence and gloom. Lubrick thought the time to act had arrived. Taking his knife from his pocket he stole to the kitchen door, where, with a steady stroke, the screen was severed and the catch withdrawn. Amid the thunder’s sullen roar and the noise of a train ascending the steep grade west of town, no sound reached the ears of the gently pair inside as the door latch was burst asunder by the assaults of the outraged husband. His voice, calling through the gloom, was the first warning, Then the wife shrieked in agony as she recognized the familiar tones. Hartman reached for his gun, and attempted to close the door of the bedroom, but the husband was the stronger, and as the wealthy mill owner staggered back and threw up his hands three pistol shots rang out in quick succession, and Hartman, mortally wounded, fell dead upon the floor of the apartment. Lubrick then turned the gun upon his wife, but she begged and pleaded for mercy, and her life was spared. The authorities were notified,and soon the whole town was ringing with the news of the murder. Coroner Horn, at Holden, was telegraphed for and arrived at 11:18. Lubrick was placed under arrest and lodged in jail. The body of Hartman, sweltering in its blood, was taken to the undertaker’s shop, where it was embalmed and prepared for burial. The funeral of Hartman will be held at the home this afternoon at 4 o’clock. It will be conducted by Rev W. V. Hamel, and will be very quiet. The remains will be interred in the City cemetery. 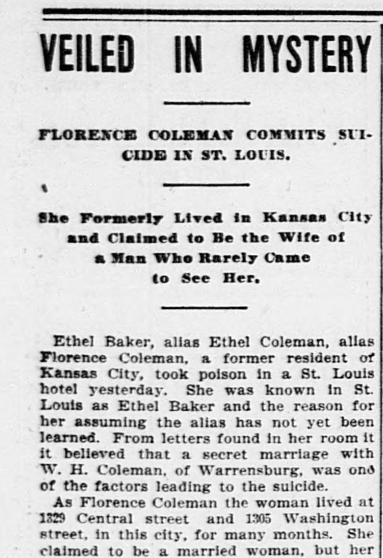 
Lubrick Murder Case Called. Warrensburg, Mo., March 14, 1899—The case of the state vs. Adolph Lubrick, charged with murder in the first degree, began here yesterday, a special session having been called to try.