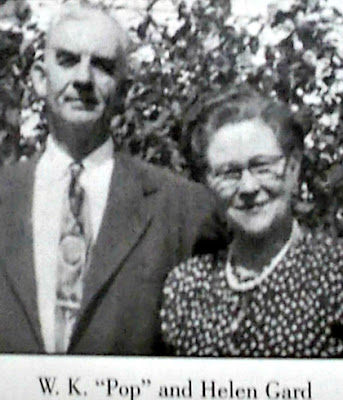 Bill and Helen Gard moved with their children, Russell, Richard and Mary (Edmondson), from Independence, Missouri, to a farm northwest of Holden in 1930.  Bill named the home built in the 1880s, Six Cedars.  Julia "Judy" (Cochran) was the first family member born there.  Later, Jeanette's (Gard-Burke Patterson) birth made them a family of seven, not counting pet dogs, cats, horses, sheep, ducks, and milk cows.

Helen was an avid gardener who filled the yard with beautiful varieties of flowers and flowering shrubs.  She wrote articles about her interest for the gardening page of the Kansas City Star.

In addition to raising crops and making sorghum for sale, Bill Gard and the boys operated the Standard Oil (later Hudson) station on the northeast corner of McKissock and Highway 131 from 1938 to 1942.

During World War II, Bill began driving for the Finley-Shotwell Bus Line, making daily round trips to Kansas City for 16 years. He was known as "Pop, the bus driver."

Finley Shotwell Bus Line stopped in Kingsville and Holden. The two photos are of Finley-Shotwell buses. The first photo is from Nat-Geo and the second photo is from the John Le Beau collection.

(Lynn Williams-Hufft I rode on the bus many times when I was younger. "Pop" Gard was the bus driver.)
Bill and Helen were active in the Holden/Kingsville communities and in the RLDS Church, now Community of Christ.  Both were involved with youth activities.  Bill, an elder, was pastor at Kingsville in 1957.  Helen was church school leader and taught children or adult study classes.  She held PTA officer of county president and state secretary and enjoyed extension club involvement.  She wrote and directed plays, sang in community cantatas and played the organ.

In later years, Bill's hobby of photography became his profession.  This included being a Holden Progress staff photographer and an Eagle photographer.

Because Bill was a staunch Eagle fan, the Holden School District began awarding a football sportsmanship trophy in his honor after his death in 1969. Grandchildren living in the county are David Burk, Clint Cochran, Bruce Edmondson, Vicky Ramey, Terry Hadley and Scott Gard. 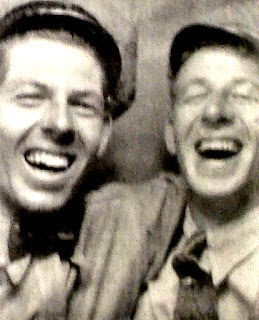 The Gard's two sons William Russell (1916-2004) and Richard Alexander (1920-2002) were well-known in Holden.  Throughout life, they were inseparable; they were even in the service at the same time and often were stationed close to each other.  Each took a turn at driving a bus, whether a school bus or the Finley Shotwell Bus.  Russ even helped brother Dick out with trips for Stahl Specialty Company in the early years.
They both married and settled down in the Holden/Kingsville area.  Dick married Mary Nel "Nell" Pritchett. Russ also wed a Mary - Mary Lee Hicks. 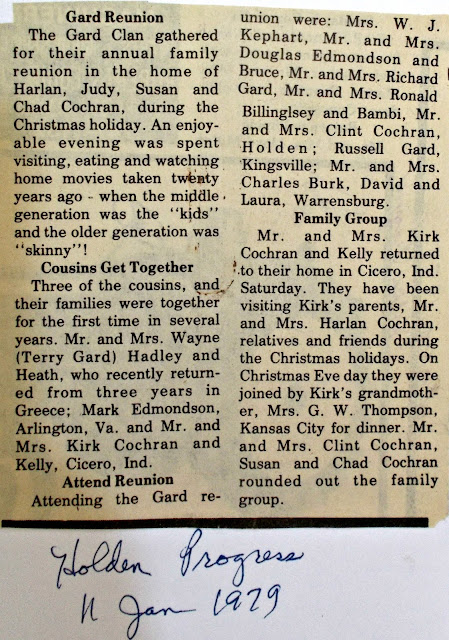 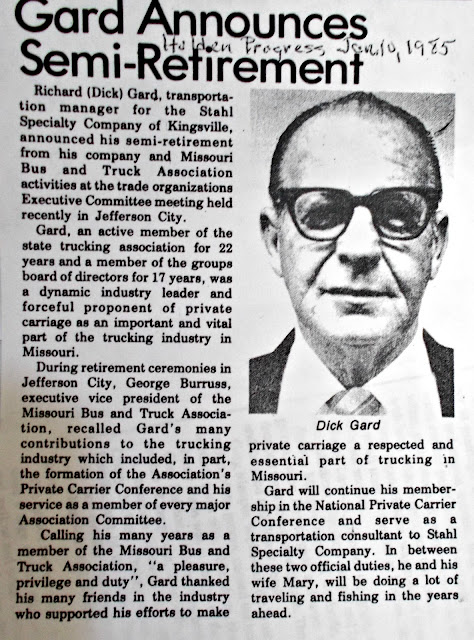 Russell retired from teaching in the Kansas City School District in 1981, and Dick retired in 1989 from Stahl Specialty Co. 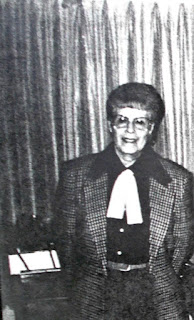 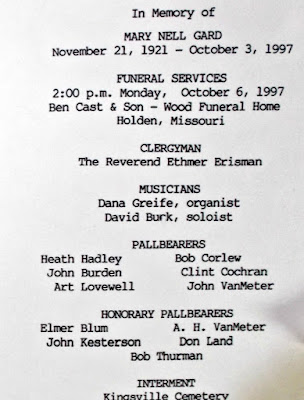 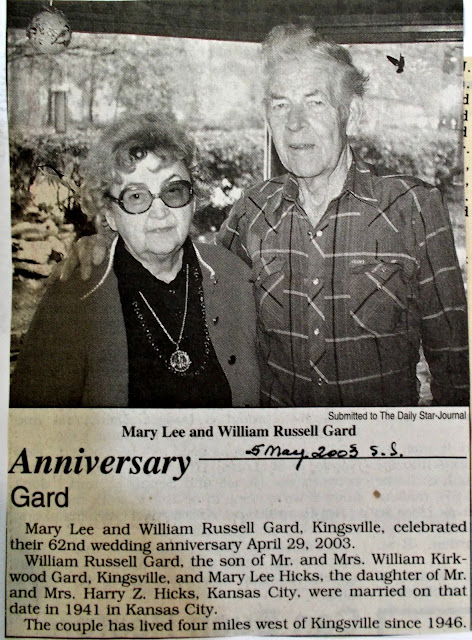 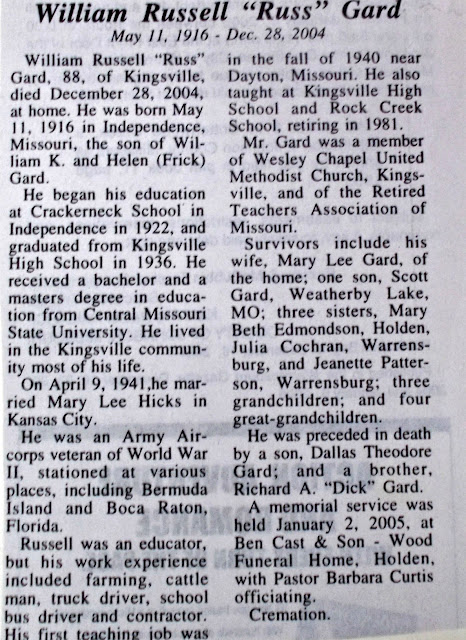 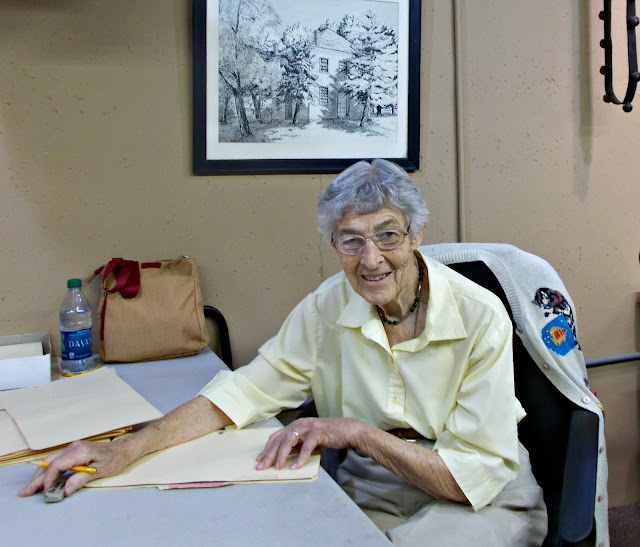 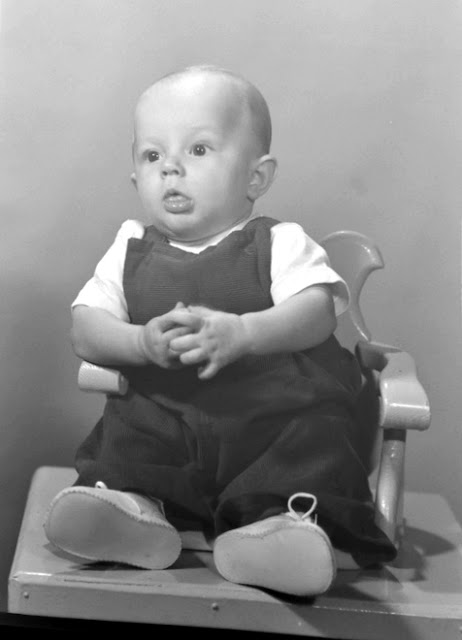 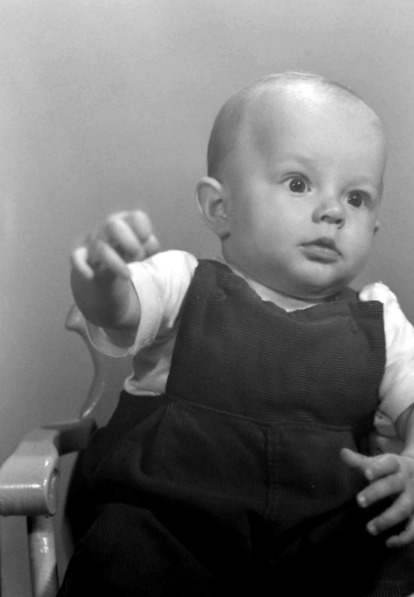 The Simmons Studio collection of negatives from the late 1940s and early 1950s includes these two pictures of a baby named Gard.  If you can identify this child, please leave a remark.