The Simmons Studio collection of negatives yielded an envelope marked Dwyer which contained 5 pictures of a woman that the volunteers working on court records in the basement of the Johnson County Historical Society Museum identified as Grace Dwyer. 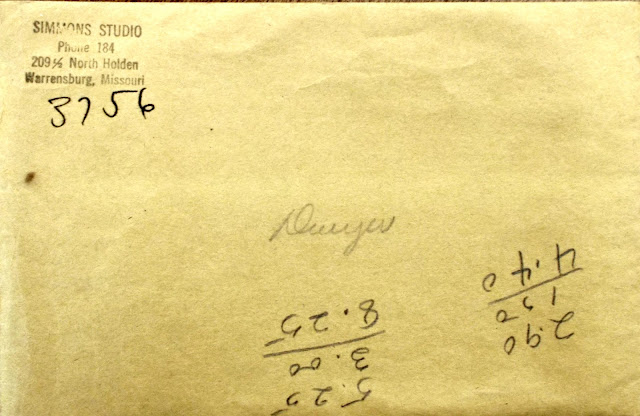 Grace Dwyer was born Dec. 15 1904, on a farm in Petis County, the daughter of Elizabeth and Charles Dilthey.  She was one of six children born to that couple - three boys and three girls. She graduated from Pilot Grove High School in 1922 and the following fall she married Olan L. Dwyer.  This marriage produced a son, John E. Dwyer. Olan was killed in a tractor accident March 21, 1930.

Mrs. Dwyer attended Central Missouri State College in Warrensburg where she was an honorary member of Alpha Phi Delta, and a member of Kappa Mu Epsilon. She received her Bachelor of Science in Home Economics from the University of Missouri - Columbia.  While attending Missouri University, she was a member of Phi Upsilon Omicron, home economics fraternity. Upon graduation, she taught four years at the Shackelford School in rural Cooper County.  She did graduate work at Colorado State University and UCM and then got a job with the University of Missouri Extension office in Chariton County. She served as Home Agent of Chariton County 2 1/2 years before coming to Johnson County.

Mrs. Dwyer was 42 in January 1946, when she transferred to Johnson County to be the Extension Office Home Agent.  At that time there were 36 Extension Clubs in the county.  She introduced many programs such as "Pennies for Friendship" which was started in 1946 to help promote international peace. Each club member was encouraged to give at least a penny to the program.

With her only child grown and living in Columbia, she had time to devote to many organizations. She served as president of the Missouri Home Agents Association in addition to serving on several committees in that group. In addition, she was a member of the American Home Economics Association, Missouri Home Economics Association, National Home Demonstration Agents Association, American Association of University Women, Business and Professional Women's Club, and Kappa Omicron Phi.  She was a member of the Warrensburg Methodist Church and Wesleyan Service Guild having served as president of the Guild and chairman of Christian Social Relations.  The local guild presented her a life membership in Wesleyan Service Guild.

She personally taught classes to Extension club members. In 1947, Mrs. Dwyer not only taught club members to make gloves from skins but she taught college girls who were interested. Agents from Carroll, Henry, St. Clair, Caldwell, and Chariton counties came to Johnson Co. to learn to make purses and belts from scrap leather so they could take the knowledge back home to their own rural women.  In 1948, the club women learned to make etched aluminum and copper trays, hand painted luncheon sets and glasses decorated by etching.

Sometime in the late 40s or early 50s she went to Simmon's Studio to have these portraits done. 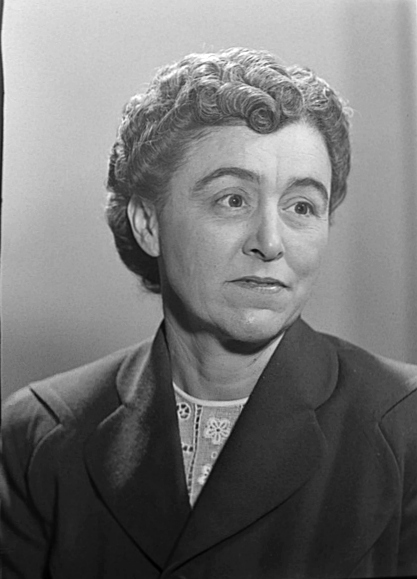 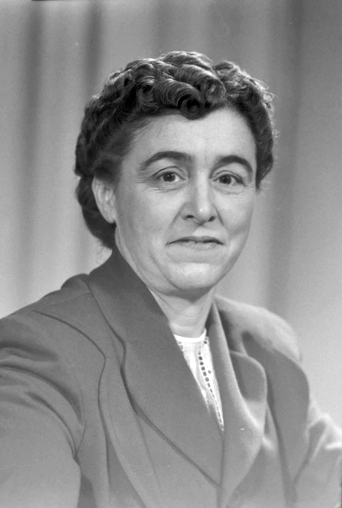 On May 13, 1949, Mrs. Dwyer organized a Family Party of Extension Clubs held at the Armory.  At the event she gave a red rose to women who had been club members for 25 years or more. They included Miss Sophia Theiss and Mrs. Clem Bruch. (Mrs. Clem Bruch was the former Mary Theiss - Sophia's sister.  Their stories are found at: http://1973whsreunion.blogspot.com/2018/03/1889-peter-theiss-comes-to-johnson.html and http://1973whsreunion.blogspot.com/2018/03/the-bruch-family-henry-harry-clem-mary.html)

Mrs. Dwyer was honored at a tea at the home of Mrs. Allen Roberts on Oct 14, 1949. At this event, Miss Rene Jenkins, State Agent representing the county council, paid high tribute to the work being done by Mrs. Dwyer by presenting her with a parasol.

For much of her career, Mrs. Dwyer worked side by side with Assistant County Agent Jack Jennings, who started his work in July 15, 1951 and resigned February 14, 1961. Don Broermann came to the Extensin Center to serve as the County Agent in 1953.  It was that same year that Dwyer attended the Associated Country Women of the Triennial Conference held in Toronto, Canada.

In 1954, KOKO radio in Warrensburg began carrying "Helps and Information," a program given by Mrs. Dwyer.  In June 1956, she began writing a weekly newspaper column, "Family Living Helps".

She had aged some and changed but little when she posed for the picture in the Daily Star Journal in 1955.

In 1958 she was one of only two agents in the country to be honored with the Distinguished Surperior Service Award for outstanding work presented by the U.S. Secretary of Agriculture in Washington, D.C. At Women's Achievement Day in that same year, the Extension Clubs honored her with a Samsonite hat box and a corsage.  The Agricultural Extension Council, Women's Extension Club Council and 4-H Council gave Mrs. Dwyer a Silver Service Award and a $50.00 bill in recognition of the honor of receiving the U.S.D.A. Superior Service Award.
Extension Club members held a farewell program and a tea Friday afternoon June 16, 1961 at the Methodist Church in Warrensburg for Mrs. Dwyer.  Mrs. George Lyle, County Council President; presented her with $70.00 and an electric toaster from the Agricultural Extension Council, (past and present), Women's Extension Clubs and the 4-H Clubs. At the time of her retirement in 1961, there were 52 active Extension Clubs in the County - quite an expansion from the 36 that she began serving when she arrived in 1946. 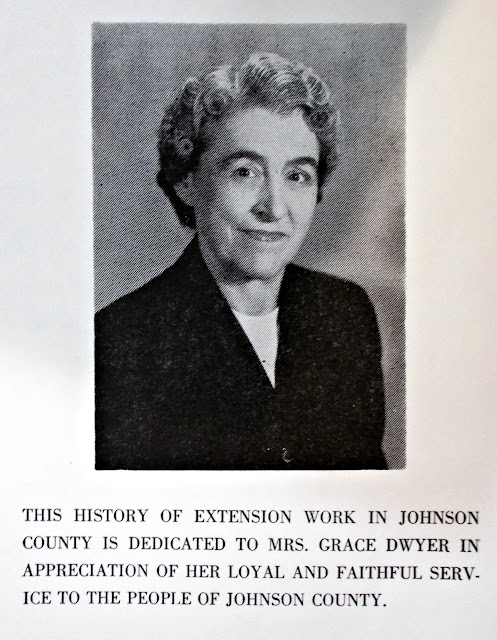 This is from a booklet published in 1961

After leaving Johnson County, Mrs. Dwyer took a trip to Europe, the Middle East and Scandinavian countries attending a Methodist Council conference in Oslo, Norway and took some courses at Scarritt College for Christian Workers in Nashville, Tennesee.  She did town and country work for the Board of Missions of the Methodist Church.


After attending the World Methodist Council Conference in Oslo, Norway, and touring Europe and the Holy Land in 1961, she did church and community work for the Board of Missions of the Methodist Church for the next 17 years in Polk county; Barton county Parish, Louisiana; Hot Springs, Arkansas; Dyersburg, Tenn. and Pittsburg, Kansas.

She returned to Warrensburg in 1978 and served as Chairman of the Christian Educational Commission and as secretary of program resources for the United Methodist Church. She moved to Columbia in 1993 and to the Katy Manor in October 1994. She died Monday, January 2, 1995 at Katy Manor in Pilot Grove.

Funeral services were held Thursday, January 5 at the Meisenheimer Funeral Home in Pilot Grove. with brother Max Jenning officiating. She was survived by her son and grandson.


Quoting from a letter written by a friend to the editor of the Daily Star Journal.

"No task was too large or too tedious for her to tackle.  She made time for everybody.  She was never too busy to visit in her office, in her home or on the telephone.  One could never tell the way she felt for she was always in a friendly mood.  Her love for people and their problems radiates in all her contacts and works.  She is crtainly a dedicted person regardless of the field in which she works.

"She seweth a fine seam". Certainly the seams of Johnson County are as fine as could be made through the many efforts she put forth to assist the people of our county."