Did Jesse James Stay in a Warrensburg Hotel?

HE FIRED LAST SHOT Of WAR.


HE WOUNDED JESSE JAMES. Foreman of Kansas Stone Quarry Recalls Daring Guerrilla as He Appeared When He Surrendered in Warrensburg (MO) in 1865
REPUBLIC SPECIAL

Kansas City. - Jan. 1, 1904 John J. Jones of Cottonwood Falls. Kansas, is the latest claimant for the distinction of having fired the last shot in the Civil War.  Mr. Jones, who was in Kansas City this week, tells an interesting story of how. On May 17, 1865 a detachment of the Third "Wisconsin Cavalry of which he was a member, chased a band of guerrillas, among which was Jesse James. He fired at the bandit. The shot, he asserts, was the last fired during the war. At the time of the incident Mr. Jones was 20 years old and a private in the Wisconsin regiment. He is now foreman of a stone quarry in Cottonwood Falls. He tells or the war episode as if it had happened but yesterday. This is his story:
"In April of 1865 the Third Wisconsin. Of which I was a member, was assigned to Missouri to assist in the suppression of the guerrillas, who were terrorizing the whole State, Including the Home Guard.
We made our headquarters In Lexington and we did not have to organize searching parties to discover bushwhackers who would give us arguments. The Incident in which I figured so conspicuously took place May 17, 1865 a party of seventeen of us were returning along the Warrensburg road to Lexington from a scouting trip. We had reached a 'point about four-and-a half miles from there, when we heard sounds of a conflict ahead. Putting our horses to a gallop we suddenly came upon "the scene of the trouble. A detachment of nine or ten guerrillas was exchanging a few shots with a party of forty-two of the Home Guards. When the bushwhackers, one of  "whom was" Jesse James, saw our re-enforcements coming up they charged the Home Guards, and, brushing them aside, galloped up a narrow by-road. Two of them separated from the main body and pointed their horses across the field. A part of my detachment began the chase for these, while set seven of us lit out after the others. 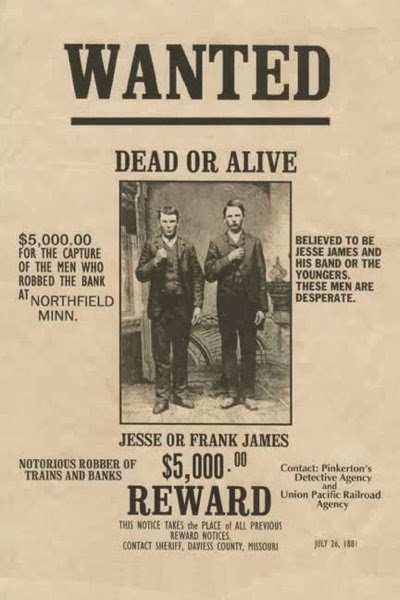 "I rode the best horse in our party, and before I knew it. I was considerably in advance of my companions, gaining rapidly on the guerrillas. I afterwards learned that the Home Guard did not take up the chase, as they feared an ambush. I had not gone far when I saw ahead of me the bushwhackers, baited. They fired three or four shots at me and then continued the retreat. I could hear my companions coming up from the rear and again set out after the enemy at a hot pace. A hundred yards farther on the guerrillas pumped a few more ineffectual shots at me. Turning a bend in the road I again came upon the band, and my predicament this time was no enviable one. They were drawn up in line, and only a ditch separated them, and me. "I had been coining at a last gallop and it was impossible for me to check my horse, as I think they thought I would try to do. Digging my spurs into my horse. I took the Jump. After the light I measured, the ditch and found it 17 ½ feet wide. When I reined up I was In the midst of the band, and my surrender was demanded immediately. My horse, however, was lashing about and he communicated this spirit to their mounts. The horses, became unmanageable, and to this. I think. I one my life, for none of them could shoot without taking a great chance of shooting one of their own party. Hearing my companions coming up the 'guerrillas again retreated, halting about art yards further on. The road formed a horseshoe bend, so that the actual distance between us, straight across, was about thirty yards. There was-a pond to separate us and I tried to cut across the water to get in their advance. Others of my party coming up however, we determined to follow the again fleeing guerrillas along the road. "After a short chase the guerrillas; reined up and backed into a thick growth of underbrush to reload. Presently one of them advanced his horse far enough out of cover to take a shot. 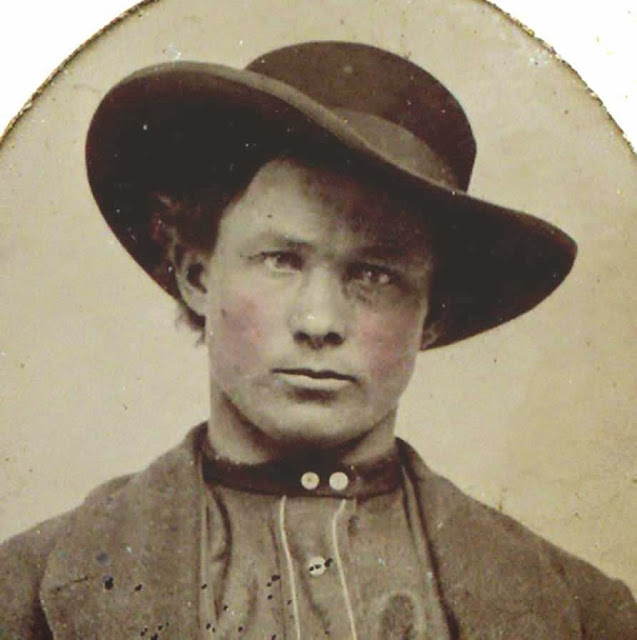 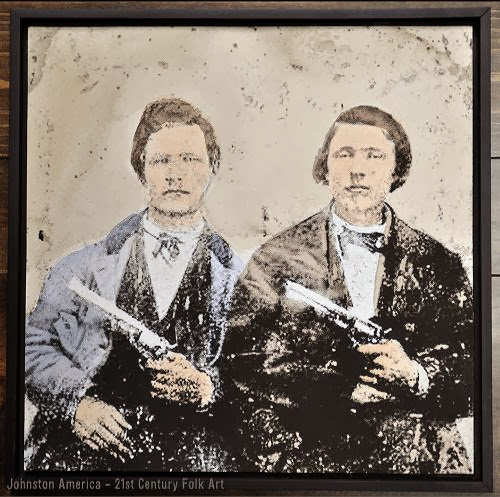 "The man was Jesse James. My shot had been effective, striking him full in the right breast. We saw him reel in the saddle and drop his revolver. Then men disappeared in the underbrush, and although the chase was continued, we did not succeed in capturing any of the band.
DAVE POOLE'S SURRENDER.

He and I became quite friendly. He told me that, shortly after he had given up the chase his companions had left him first hiding him in a clump of bushes. Twenty-four hours later he was picked up by a farmer. He was three years and a half recovering from the wound. "Some time later, as a reward for my action that day. I was offered my choice between a Lieutenant's commission or a cadetship at West Point. I refused both. I am confident that the shot I fired at Jesse James that day was the last shot of the war."


Jesse James and some of his fellow guerillas, while reportedly trying to surrender, are involved in a skirmish with the Third Wisconsin Cavalry at Lexington, Mo. Jesse later claimed that he received his near-fatal bullet wound to the lung on May 15 and that he surrendered in Lexington on the 21st. Confederate records appear to verify these dates although Jesse was so seriously injured he thought the surrender was not recorded. Evidence supporting this includes a surrender roster in the National Archives and an interview Jesse gave to John Newman Edwards which was published in 1873. The Lafayette Advertiser reported that 77 guerillas had surrendered and taken loyalty oaths to both state and Federal governments.


NAME: Jesse James
OCCUPATION: Murderer, Thief, Organized Crime Boss, Folk Hero
BIRTH DATE: September 05, 1847
DEATH DATE: April 03, 1882
PLACE OF BIRTH: Kearney, Missouri
PLACE OF DEATH: St. Joseph, Missouri
FULL NAME: Jesse Woodson James
AKA: Jesse James
Early Life
American outlaw, robber and legendary figure Jesse Woodson James was born on September 5, 1847, in Kearney, Missouri.
Jesse and his brother Frank James were educated and hailed from a prestigious family of farmers. Their father, the Reverend Robert James, was a Baptist minister who married Zerelda Cole James and moved from Kentucky to Missouri in 1842. In the summer of 1863, the James farm was brutally attacked by Union soldiers.
Jesse was 16 when he and Frank became Confederate guerrilla soldiers, riding alongside William Quantrill and “Bloody Bill” Anderson.Note: Jesse and Frank were taught how to rob banks by Arch Clement of Kingsville, MO. Johnson County. Standing about five feet tall and weighing in at a stout 130 pounds, Archie Clement may have been the most feared—and perhaps the most sociopathic—of all Bill Anderson’s guerrillas. Clement was best-known for scalping and mutilating the corpses of Unionists—military or civilian—and served Anderson as a lieutenant during the massacres at Centralia. Arch Clement Link
Partners In Crime


Some historians accuse Jesse and Frank of being cruel to Union soldiers, while others argue that it was the brutal treatment the brothers received that turned them to a life of crime. Either way, they rebelled against harsh postwar civil legislation and took the law into their own hands. They began robbing trains, stagecoaches and banks that were owned or operated by a Northern institution.


There has been speculation that the boys and their gangs were like Robin Hood, robbing the rich and giving to the poor, but there is no evidence for that. Most likely, they kept the money for themselves. From 1860 to 1882, the James Gang was the most feared band of outlaws in American history, responsible for more than 20 bank and train robberies and the murders of countless individuals who stood in their way. They stole an estimated $200,000. They were legends in their own time, popular in Missouri for actively trying to further the Confederate cause.


On December 7, 1869, the gang robbed the Gallatin, Missouri, bank. Jesse asked to change a $100 bill, and thinking that the banker was responsible for the death of Bloody Bill, shot the man in the heart. Local newspapers labeled the actions vicious and bloodthirsty and called for the gang’s capture. From that robbery to the end of their careers, members of the James Gang had a price on their heads, dead or alive.


In 1874, Jesse married his longtime sweetheart and first cousin, Zerelda, and had two children. Both James brothers were known as good family men who loved their wives and spent time with their children, but they still continued their life of crime.


Though protected by their community, they were always on the move. Even after other members of the gang had been killed, and their friends the Younger's had been sent to prison for 25 years, in 1879, the James brothers planned one more robbery with Charlie and Bob Ford. Little did they know that Governor Crittenden of Missouri had put together a reward fund so large that the Fords had turned traitor to earn it. (Governor Crittenden practiced law in Warrensburg, MO) 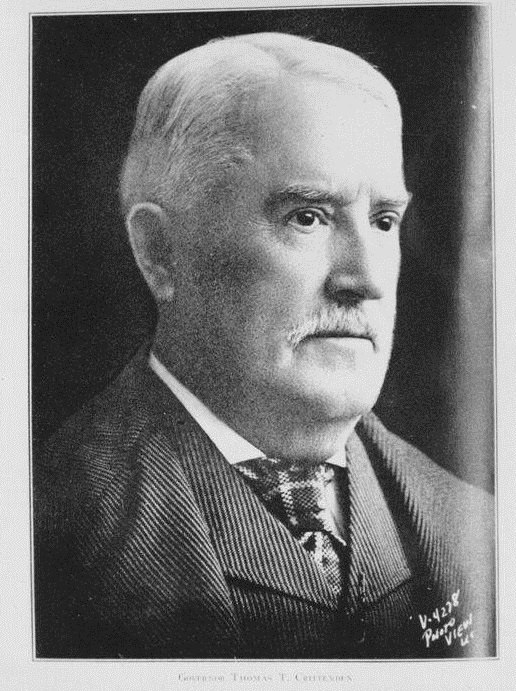 Governor Thomas Crittenden 1881-1885
Practiced Law in Warrensburg, MO, Johnson County
with Sen. Francis Marion Cockrell
Sen. Francis Marion Cockrell Link
Thomas_Theodore_Crittenden Link
After breakfast on April 3, 1882, Jesse turned to straighten a picture on a wall of his home, and Bob shot Jesse in the back of the head. Jesse died instantly at age 34.
People in Missouri were outraged at the method used to capture him and considered it a cowardly assassination. Within three months, Frank surrendered to Crittenden. The juries would not convict on the meager evidence, so Frank resumed a quiet life.